How We Made Foreign Agent

An Interview with the Producers and Composer of Foreign Agent 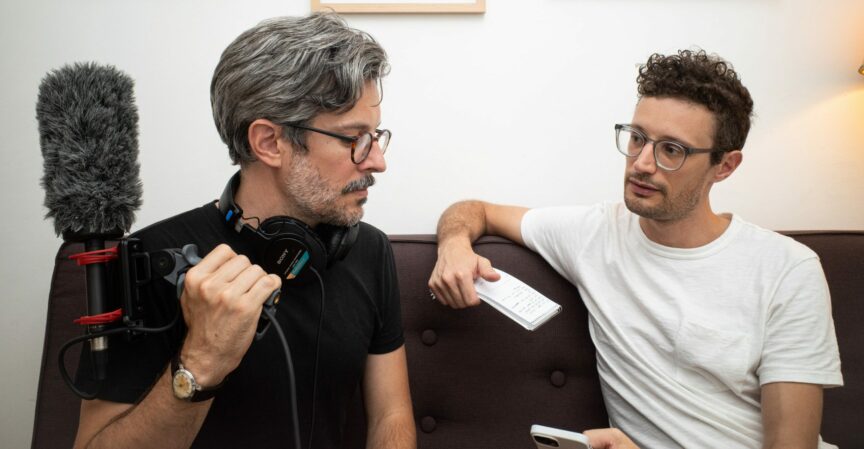 Foreign Agent is Novara Media’s first narrative podcast. Over six episodes, New York-based journalists Nate Lavey (above right) and Michael McCanne (above left) explain how a small group known as Noraid was able to funnel weapons and cash from the pockets of ordinary Irish Americans into the coffers of the IRA throughout the Troubles.

It’s a story with tons of drama, from gun smuggling plots to wild courtroom battles. But it’s also about the shifting sands of political struggle and emigrant identity, as Irish America left its own mark on the peace agreement.

To mark the conclusion of our biggest ever podcast project, Novara Media’s head of audio, Chal Ravens, spoke to Nate and Michael about their own fascination with Noraid and why it’s a story we should remember today. Plus, series composer Matt Huxley explains how post-punk and spaghetti westerns inspired his evocative original score for Foreign Agent.

Chal Ravens: Where did you first hear about Noraid?

Nate Lavey: I first heard about the group when I was reading Ed Moloney‘s book, A Secret History of the IRA. There were a few references to the organization and I had to know more. I started by just looking them up online and was pretty shocked to see they still exist. From there I began looking through some of their nonprofit tax filings and what I found sent me all the way back to the beginning of the group in 1970.

CR: What made you want to turn the story into a podcast?

Michael McCanne: The whole history of the Irish American community’s support for the IRA was really fascinating. It was a part of the story of the Troubles that I hadn’t heard, and also touched on important historical currents in the United States at that time: the evolving shape of whiteness and post-New Left politics. Noraid specifically embodied this wild tangle of conflicting political tendencies wrapped up in Irish nationalism that’d been transposed to the United States.

NL: When we saw that there was a significant collection of interviews with former Irish Northern Aid members in the archives at NYU we knew we had to do a podcast. There was, of course, plenty of archival material from television news from the period, but there were these long interviews with ordinary people who hadn’t been heard from. We thought it was important that folks get to actually hear their voices, hear the moments of passion and doubt.

CR: Why do you think the story of Noraid is worth remembering today?

NL: It was actually amazing to us how little work has been done on Irish Northern Aid. It’s a real gap in the understanding of the Troubles, since the US was a significant battlefield for the British and the IRA. The history of the organization shows that armed struggle can sometimes be a unifying element in political work that can shape and re-shape people’s identities. It demonstrates the challenges of engaging with parliamentarianism and the risks and rewards of militant street politics. It also shows that average Americans are capable of wide scale, solidaristic action on behalf of people a world away.

MM: To me it was also an eye-opening exploration into the power of nationalism, how it can forge unity out of really disparate political positions. It gave the IRA an advantage over the ideologically motivated armed struggle groups in other parts of Europe at the time. But nationalism not only unified disparate factions in organizations but also within people themselves. Irish American cops, dedicated to the law-and-order politics of the 1970s happily gave money to a guerilla group shooting police officers in Northern Ireland. Through the libidinal pull of nationalism they were able to square this incoherence.

CR: Have you two worked together before?

NL: Michael and I have been friends for a few years, but we’ve been involved in similar social and political scenes for much longer. We really started our “work” together by just offering comments on each other’s films and trading ideas about how to get them into film festivals.

Michael has an excellent short film about a former member of the Japanese Red Army called A Minor Figure, and I made a feature length documentary about a network of internment camps that were built in the 1940s in prison Jewish refugees from the war. I think, though, the truth is that we just get along really well and enjoy each other‘s company.

CR: Did you come up against any difficulties while working on the series?

MM: Some of the interviews were harder to get than others. Lou Stephens, the FBI agent who arrested two of our main characters, was initially happy to do an interview, but a few days before he got cold feet. Apparently one of his FBI buddies pointed out that he didn’t really know we were journalists and that we could actually be IRA sympathizers out for revenge. I had to call him and talk him down and we drove out to his retirement village in the middle of rural Pennsylvania.

Some people, especially those involved in the less successful trials, hung up when we called. Other people were much more willing. The lawyer Bill Mogelescu was all too happy to relive the trial where he beat the Feds so handily.

One of the main problems with each episode was an over abundance of material. Each script is about 8,000 words and took probably three weeks to write, record and edit. We have to thank you, Chal, who helped us refine the scripts and Steven Methven, our fact checker, who caught plenty of errors.

CR: Were you met with any exciting surprises along the way?

MM: It was great to find the interview with George Harrison, to hear in his own words his communism and Irish Republicanism. He was a very moving character. We didn’t put this in, but later in life he had great sympathy for the struggles of queer and trans people.

NL: We got access to some archival interviews that were conducted with Brendan Hughes, an IRA volunteer who became quite vocal in his criticism of Gerry Adams, in later years. He played a central role in Patrick Radden Keefe’s book Say Nothing. And in those tapes he reveals he was sent to the US very early on in the Troubles to buy Armalite rifles from some of the people we encountered while digging through the NYU archives. When we heard Hughes’ story in his own voice, we knew it had to go into the show.

CR: In the second episode, you take the story right back to the 12th century when Norman colonisers settled in Ireland. Why was it important to travel so far back in history?

MM: People who don’t know that much about Anglo–Irish history often think of the Troubles as a sectarian conflict that spilled over into violence in the late 1960s. It’s important to show the deep material and historical forces at work, which lead up to the rise of the Provisional IRA and everything that came after.

It’s also crucial to understanding the parallels and disconnects between the Irish experience of colonization and the Irish American assimilation into the American colonial project. It’s important to contextualize the actions of Irish republicans and their American supporters within a broader social and ideological history.

CR: Throughout the series, several voices make the claim that Irish Americans played a decisive role in the lead-up to the peace process. What do you make of this?

NL: Americans love taking credit for things, so it’s no surprise that people would claim they had a decisive role. But the truth is a bit more modest: I think some Irish American politicians played an important, small role in how the peace process came about. The influence of constitutional nationalism within Congress meant the British eventually had to respond, in some way, to pressure coming from the US.

And this took a lot of work! When Bloody Sunday happened in 1972, Richard Nixon was caught on tape saying that he felt the British military response was justified—the American state was not interested in getting involved in Northern Ireland. But over twenty years, groups like Noraid forced the American government to become involved in the political conflict. Through that, they helped legitimate Irish nationalism—especially Sinn Fein—and create the groundwork for the peace process.

CR: You also made a couple of bonus episodes for the series, including one on Hollywood’s (not so impressive) depictions of IRA gunrunners. Are there any films about Noraid or the IRA that you do think are worth watching?

MM: Ken Loach’s The Wind that Shakes the Barley is great, if heartbreaking. It depicts the Black and Tan War and the beginning of the Irish Civil War. The action takes place pre-Noraid, of course, but it portrays the conflicts that shaped the founders of Noraid and their world view.

NL: Hunger, by Steve McQueen, is pretty extraordinary. I remember seeing it when it came out in 2008 and being struck by a lot of the formal aspects of the film: the cinematography, the editing, the long-duration shots. But rewatching it for this podcast I was surprised at how well it captured the emotional and political sensibilities we’d encountered while researching the episode on the hunger strikes. 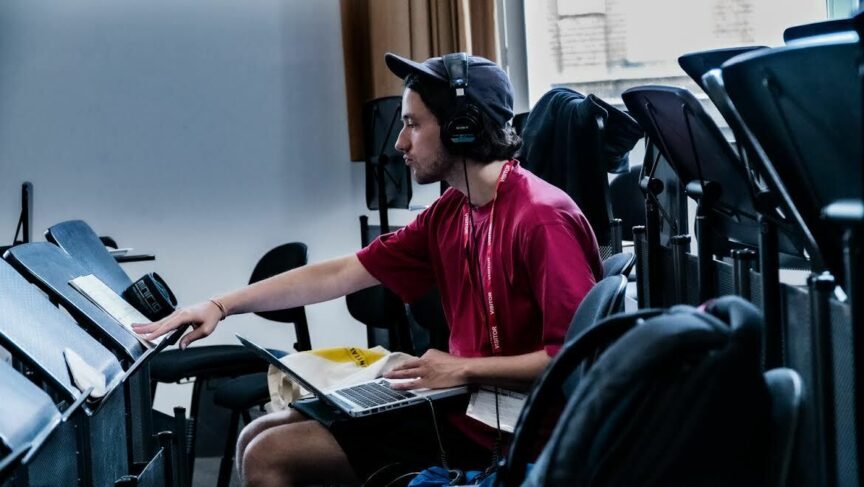 CR: Have you ever scored a podcast before?

Matt Huxley (above): I’ve made plenty of podcast themes – including for ACFM – but this is the first fully scored show I’ve been involved in. Having done lots of work in theatre and film composition, the demands are quite similar. You want music that can set the tone, play with tension, add another dimension to the world being created, and sometimes just bind together sections and transitions.

CR: How did you develop a unique palette of sounds for Foreign Agent?

MH: We wanted to have music set a tone for the whole show, but still be able to signpost between the American and the Irish scenes, so we tried to develop a soundworld that was cohesive yet diverse – as any good score should be! From a technical perspective, this meant using lots of broken amplifiers, grungy old keyboards and beaten-up basses drenched in lots of reverb.

CR: What kind of references did you have in mind when starting to compose?

MH: I listened to quite a bit of icy, tough post-punk and no wave to get the mood for the main musical themes, especially for the Irish parts of the story. I also leaned into some Morricone-flavoured Western soundtracks to bring to life the more freewheeling American elements of the show.

Nate Lavey is a documentary filmmaker and video journalist based in New York. He has covered social struggle in the aftermath of the Tunisian revolution, student uprisings in Quebec, and depleted nuclear production facilities in New York City. His first feature film, Those Who Heard and Those Who Saw, is about a network of internment camps that were built in Canada in the 1940s to imprison Jewish refugees.

Michael McCanne is a writer based in New York. His work has been published by Art in America, Jacobin, The New Inquiry, Boston Review, Jewish Currents, and Dissent. His first film A Minor Figure, a collaboration with Jamie Weiss, was selected to premiere as part of the 2021 edition of Documenta Madrid.

Matt Huxley is a musician, composer and co-producer of the ACFM podcast on Novara Media.

Listen to the trailer: