Are Anti-Corbyn Groups Buying up Facebook Ads on Behalf of the Conservative Party?

The Conservative party’s Facebook advertising strategy has been looking a little strange recently, with their spending in the past week eclipsed by the Liberal Democrats, the Labour party and anti-Brexit group Best for Britain. This is despite the Conservatives having spent far more on Facebook ads in past elections than any other party – £2.1m in 2017 to Labour’s £500,000, and £1.2m in 2015 to Labour’s £16,500.

But while the Conservatives’ spending has gone down, spending by obscure campaign groups pushing an anti-Corbyn agenda – but not being clear about which party they support – is creeping up.

According to Facebook’s (admittedly sometimes glitchy) ad library, the Conservatives spent just £31,935 on adverts in the seven days between 11 and 17 November (inclusive), a tailing-off of spending earlier on in the campaign, amounting to just half of Labour’s £66,611 and far behind the Liberal Democrats’ somewhat exorbitant £86,675. Currently, the Tories’ spending is even £5,000 behind Best for Britain.

Facebook Ads Library report for the past seven days, as of 19 November 2019 (screenshot)

But dig a little deeper and it seems that while the Conservatives haven’t run many ads, five ‘campaign groups’, all established by Tory party activists in the same style and starting to spend at the same time, have done a lot of the work for them.

Before November none of these groups had ever run paid-for Facebook ads before. Most didn’t exist at all. Two of the people behind the groups are political consultants who have worked or are still working for Boris Johnson or the Conservative party, one is a Conservative councillor, one is a retired Tory MP and one is a Daily Express journalist.

One of the consultants, Alex Crowley, a former aide to Boris Johnson, previously worked on a fake grassroots campaign for a no-deal Brexit. He was behind the first of the pages to start spending – before his initial ads were pulled for not properly disclosing their political subject matter.

The combined spending of the five groups amounts to £21,201 in just seven days – a pretty significant amount given it is two-thirds of what the Conservative party itself spent in the same time period. 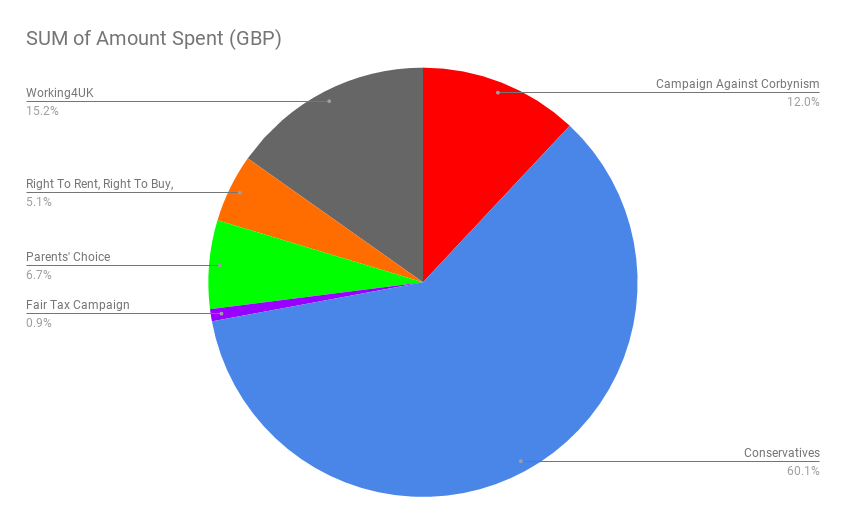 Without a leak it would probably be impossible to prove a link between the five pages, yet they all follow a similar pattern – from the time they were set up to their self-consciously amateur aesthetic. Only one, Express journalist James Bickerton’s Campaign Against Corbynism, appears to be an actual group, which the BBC reports is run by a small team of volunteers, rather than just a hastily established Facebook page.

Beyond Alex Crowley’s track record of deceitful campaigning – not to mention Boris Johnson’s own liberal attitude to the truth – it’s important to note a significant change in the Conservatives’ social media strategy this time around. In October it was reported that the party had hired two political campaigners, Sean Topham and Ben Guerin, who are credited with helping a rightwing coalition win a surprise victory in Australia’s election last spring. They are also known for running what the Guardian has described as a “large-scale professional disinformation network” for clients including the Saudi government and major polluters. It was reported they did this by finding loopholes in Facebook’s notoriously weak rules on transparent political campaigning by pretending to be grassroots, independent news sources.

Historically, the Tories have struggled to mobilise an authentic supporter base and to spread information organically, achieving less social media reach than Labour despite larger spends. It’s possible these ‘campaign groups’ could help the party to get around that – at least to an extent – this election.

Dubious tactics have already served the Conservative party well this election, with the Guardian pointing out that Crowley’s initial rule-breaking resulted in mainstream media coverage of his campaign that gave it a far larger reach than he could have hoped for with Facebook ads alone, in what could be considered a highly effective form of asymmetrical advertising. Topham and Guerin are known for pioneering ‘so bad it’s good’ advertising, in which people are baited into sharing terrible content simply to point out its absurdity or flagrant dishonesty, expanding its reach.

Here are the five groups and their founders, in case you want to dig around more for yourself.

Set up by: Alex Crowley, a political adviser who worked on Johnson’s Tory leadership campaign, two mayoral campaigns and wrote a book about him.

Line: Corbyn would make everyone pay loads of tax.

Set up by: Suraj Sharma, a Tory councillor in Chiselhurst.

Line: The Labour party is bad for the economy.

Set up by: Jennifer Powers, a policy and strategy consultant who works for the Conservative party.

Line: Corbyn will steal your house.

Created: The outlier – 27 April 2019 (but note that it didn’t start spending until last week).

Set up by: James Bickerton, a Daily Express journalist, with a background in politics and PR.

Charlotte England is a commissioning editor at Novara Media. She has also written for the Guardian, the Independent and VICE, among others.