Uniting Communities: Organising for Real Change in Greater Manchester at Christmas and Beyond

“In this day and age, these community groups are going to get well important,” Santa tells Novara Media, raising his voice slightly to be heard above the din of dozens of excitable children. “Everyone needs to pull together and do their little bit, whether it’s for the kids or the old people or the single parents. Everyone needs to do their bit, don’t they?”

Novara Media catches Mr Claus on a brief break from grotto duties at a festive community fun day at Oldham library, which has been organised by 0161 Community, a community organising group named for Manchester’s telephone dialling code. The group, which aims to promote a “strong, unified working-class identity”, was founded 18 months ago by a pair of friends and currently organises free arts and sports classes across Greater Manchester with a view to empowering working-class people to take control of their neighbourhoods.

It’s a project which has a fresh pertinence following the result of the general election. “Because of the government we’re gonna have in, the way things are gonna go,” says Jan, a fun day volunteer, “I think community grassroots-level stuff is how people are gonna change attitudes and, to be honest, how people are gonna cope.”

Little wonder, then, that organiser Joe Chlebik was feeling the pressure the night before. “We’ve done loads of fun days – graffiti, art, boxing, I’ve got no issue with – and we knew it was a good idea, but the night before I was suddenly just like, ‘Fuck, we’ve got no idea what we’re doing!’ because basically we had to build a Santa’s grotto from scratch,” he tells Novara Media when we catch up a few days later. “To be honest though, everything could not have gone better.” 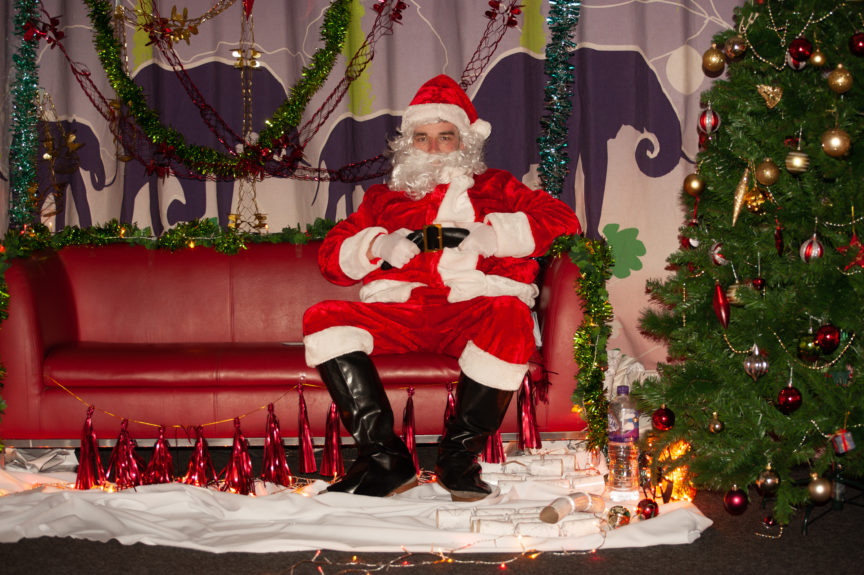 When Joe, 26, co-founded 0161 Community with a colleague from Curzon Ashton FC, they couldn’t have anticipated how well-received the group would be within their local community. Having decided they wanted to “do something”, they spoke to Oldham library about putting on a community day.

“Oldham library were like, ‘Yeah man, come down, do whatever you want.’ And we were like… ‘Alright, cool. Nice one!’ So we went down, we had a desk at the front and we had like graffiti, boxing, loads of different taster sessions, and that was the first practical event we did. Then we started doing one event a month, and off the back of that we started doing two events a week in other libraries in other areas.”

Since then, 0161 Community has expanded its activities, which have ranged from football tournaments to creative writing and photography workshops. In summer 2019, the group undertook a month-long residency at Islington Mill in Salford, its first stable base and something of a proof of concept.

“The vision is to get a permanent space in each borough of Greater Manchester, so that would be 10 in total,” says Joe, who seems unpeturbed by the level of commitment such a large operation would involve, despite currently working full-time at a school. “At the peak when it all blew up there were about five classes a week, and there was like three of us,” he laughs.

Nowadays, 0161 Community’s work is made possible thanks to the dedication and effort of around 20 core volunteers, a wider network of 30-40 who support the group with free time and resources, and a friendly relationship with local libraries and clubs. “I think what they do is fantastic,” says Katie, a development officer at Oldham library.

“They do loads of free stuff and get kids involved and build their confidence up. Obviously we have food banks in the area, public services have been hit by austerity and it has knock-on effects in the community. 0161 bring in people who wouldn’t necessarily engage with the library. For kids it changes their perception about what they can do here, so it opens up the community to us.”

“We do loads of stuff there,” says Joe. “They’re super helpful – we started doing stuff there and they’re just amazing.”

There’s no doubt 0161 Community takes a strong stance when it comes to its political commitments of working-class solidarity and community power. Such commitments are pertinent to communities like Oldham and Rochdale, which have suffered from racial divisions in the past, and which have continued to suffer due to a decade of government austerity. Through its programme of self-organised workshops and community days, the group aims to strengthen community bonds and foster a sense of collective unity across divides.

“We try to unite communities through sport and art,” says Joe. “It’s not a ‘political group’ as such – we’re not going to tell people what to think or what to believe – but like, don’t be a racist, don’t be a sexist, don’t be homophobic, just don’t be a dick. That’s the top line – obviously we can’t really tell kids not to be dicks, but we can say don’t be mean to each other and set a good example by rejecting any kind of hate. At the end of the day we can’t do anything unless we’re united in our communities.” 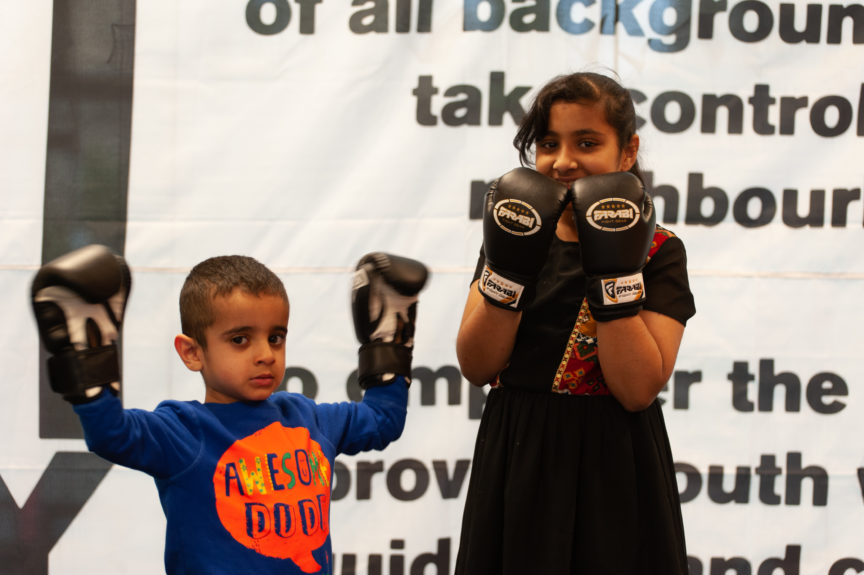 “Basically there’s fuck all for people to do, like at a basic, simple level. There’s nothing for kids to do, communities are super divided, and there’s also this modern-day individualistic lifestyle that’s really being pushed – people are increasingly on their own and not doing community things.”

Joe is quick to point out that although the programme often focuses on childrens’ activities, the aim is to create positive effects intergenerationally: when parents bring their children for classes they tend to end up talking to each other or taking part themselves. Kids become friends with each other, parents see changes in their kids, and the sessions foster a sense of community where people realise they share the same difficulties and can rely on each other for mutual support.

“People don’t talk about stuff anymore, and in this society it’s super difficult to engage with people in conversation because it’s stigmatised loads. So having a space where you can chat to people and do things, it makes the world of difference. You can see the change in people.”

It is impossible to escape the sense that 0161 Community feels like a response to a decade of public sector cuts – that perhaps 10 years ago the sorts of activities the group puts on might have been facilitated by properly funded youth or community centres. But for Joe it’s not simply a case of trying to fill in the space hollowed out by austerity. Rather, the group aims to promote the idea of self-organisation as a fundamental principle of building up communities that are strong, where people feel confident and not alone. 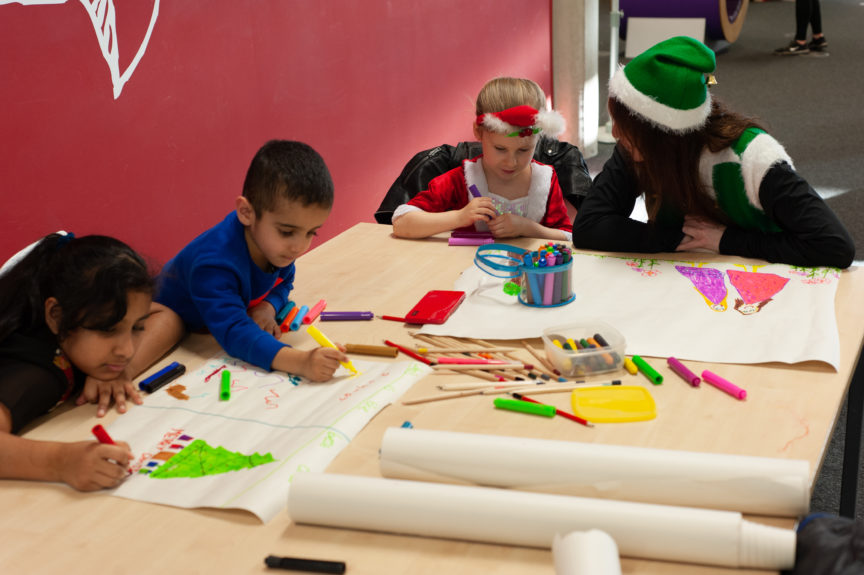 At a point, post-election, when many on the left are turning to ideas of ‘community organising’ as both a practical means of weathering whatever the next five years brings and promoting socialist values in places where reciprocity with the left – and particularly the Labour party – has been in decline, there is undoubtedbly a lot to be learned from what 0161 Community has been doing in Greater Manchester. Since the election, community union Acorn has reported a surge in membership applications, while Momentum has been considering a turn towards facilitating more sustained community-based action. Both are positive developments, but it raises the question of why more people on the left haven’t been undertaking community-oriented initiatives already.

“I think a lot of it basically comes down to ego,” says Joe, when Novara Media asks about the difference between talking about community organising and doing it. “Doing this is hard work, man. It’s a lot of work, whatever people say.”

“You’ve got to put the time and the effort in consistently, and basically there’s no reward. No one gives you a pat on the back, you don’t get into office, you don’t get 10,000 followers on Twitter or whatever, and I think a lot of the left want that.”

“That doesn’t just go for the left, that goes for people and especially people across the political spectrum. People do things because they want recognition, and I think people need to realise that – and I think people probably have started to realise this after the election – you can’t just parachute into an area, do work for eight weeks and then people are going to be like, ‘oh cool man, yeah you’re my new hero’. That’s not how it works man, it’s gonna take years and years of work.”

Joe points to the Black Panther party’s famed free breakfast programme as a historical example of community organising which has passed into leftwing folklore. He argues that while it’s right for the left to recall initiatives such as the breakfast programme, it’s easy to allow them to be idolised as great ideas of the past rather than part of the fabric of what is achievable in the here and now. What advice would 0161 Community impart for people who are serious about starting their own community organising groups? While it can be hard work, Joe thinks people often tend to make out it is more complicated than it is.

“Get two of your mates, do one boxing class, and I guarantee it: build it and they will come. It’s fucking true! People need stuff to do. Take a mate, go to a shop and get 50 eggs, make everyone an egg butty and get down to the local shop and start talking, and I guarantee people will come and I guarantee you’ll start hearing people’s grievances and what people need and what they want. It’s objectively that simple but people make it this wild, complicated thing. It’s just hard work. But if we want to create real change and make a tangible difference to people’s lives, that’s how we do it.” 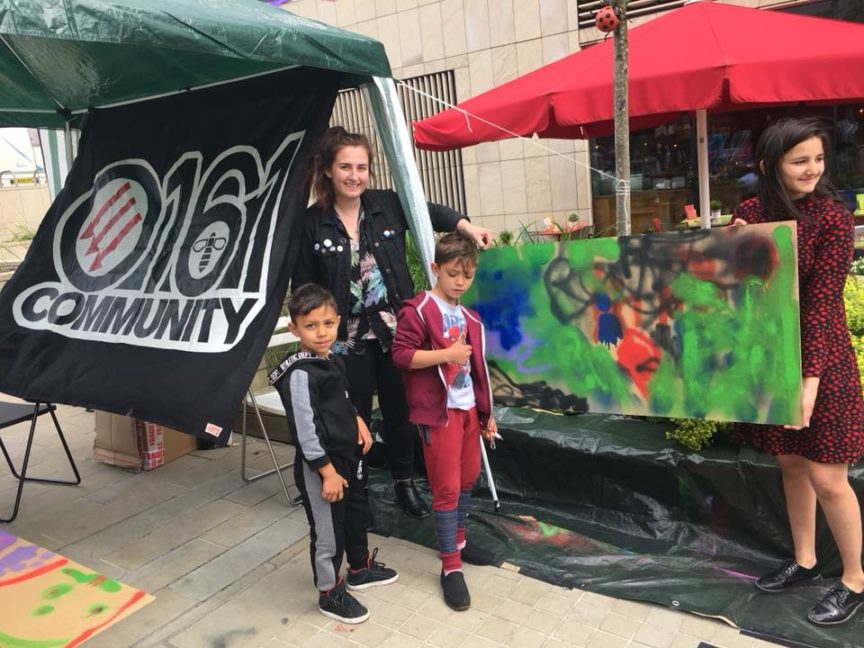 He doesn’t stop there.

“If there’s a couple of you, especially if you’re disillusioned with the election and looking to do stuff, get a group of you together. If you’re too hesitant about doing something on your own I guarantee you there’s something going on near to you already. Go out and collect coats for the homeless, or get a few of you and go and do something at a food bank, or something really simple – go get people from your local estate or area and go for a walk on a Saturday or a Sunday. Get everyone’s dogs, kids, anyone can come. Get people out and about. Get two or three of you, go and get some [boxing] pads from Sports Direct, start doing some pads in the park – I guarantee people will come up to you and ask about it. Or go make 20 butties and hand them out on the school run. Or put little flyers in each door.”

“I’m not talking about doing it for a city or a town. Do it for two roads. If you look at community organising anywhere it’s done street by street or estate by estate or block by block. I’m not talking about going out and doing stuff for the whole world – if we all start taking control of our own neighbourhoods and we start talking to each other and we learn from each other, that’s how we’re going to create a real movement and a real change that people feel and where people can see a real tangible difference to their lives.”