Shit Jobs for All: the Many Horrors of the Zero Hours Contract

George is sitting across from me on top of a wooden crate smoking a poorly-rolled cigarette. He closes his eyes in a futile attempt to get some rest for the day ahead.

It’s cold outside and he certainly feels it, wearing nothing save for a creased shirt, black trousers and a damp apron. George is undertaking the ‘workhouse shift’ in a marquee at Goodwood racecourse in Sussex, which he explains to me lasts from 5am to 11pm. “Yes, pm” he replies, registering the disbelief on my face, “18 hours and I’m lucky if I get a half-hour lunch break in between”.

George’s Welsh accent gives away that he’s not around here, or that he even lives here. He confirms as much, explaining that he lives a few hundred miles away, with his wife and two young children and that he’s only “taking this shit for them”. After his shift, George will go to his caravan in an adjacent field that the racecourse houses him in and sleep for a few hours before waking back up at 4am to start all over again. This isn’t a one-off, George will be doing this for five days in a row.

From the moment that an election was called in October, it was clear that the Conservative party’s campaign was principally aimed at swinging the working class. With efforts concentrated on Labour leave seats and non-stop briefings about “The Workington Man” it seemed that Boris Johnson was desperate to set himself apart from previous Tory leaders as the ‘Etonian of the people’.

But what seemed more peculiar than a Tory campaign aimed at flipping working people was that there was one noticeably absent voice from the campaign; working people. In what was meant to be a campaign channeling the Tory proletariat it seemed odd to many that nothing in the manifesto was dedicated to the unions, workers’ rights or even pay increases.

Then again, this is hardly unexpected from a party who for the past nine years has conspicuously sidelined working people in pursuit of even more so-called flexibility in the UK labour market. Perhaps the most recognizable Tory legacy to come out of this pursuit will be the explosion of the infamous zero hours contract – a type of contract between worker and employee whereby the employer is not obliged to provide any minimum working hours.

George and I work on such contracts for agencies that cater for events in the South East. All around the country at weddings, race courses, concerts and parties, workers toil away in truly sinister conditions for poor remuneration. If anything symbolises the decay of the protected British labour force, look at agency workers like us, who are forced to accept a contract most working people would shudder at. These workers pour your pints, serve your canapes, clean your bins and are often overlooked by the public and regulators alike, meaning that such work usually tends to be casual, precarious and exploited.

On a shift at Newbury racecourse, I talk to another worker Dan on shift at an exclusive on-site restaurant. He works for an agency in Chester and is forced to commute for four days as his agency hasn’t been generous enough to give him a caravan. He tells me nonchalantly that he’s forced to wake up at 4am for a shift that starts at 9am and finishes at 7pm.

At the end of the day you can see him climb onto the bus with others from the same agency; uniform-clad and exhausted before being carted away for three hours. He looks about 40 and sports an untucked shirt and bags under his eyes. He explains that once the racing ends in Chester, the work dries up, forcing him to adjust his preferences and accept work he would have scoffed at a month ago.

This insecurity underpins all agency workers. Many tell me tales of travelling for hours, only to be told their services are “not needed” and to be sent home. Many are told this jovially, but this sort of inconsistency is not sustainable for living an ordinary life.

Dan and George’s cases are far from unique. I’ve talked to cleaners who haven’t been paid, pot-washes who have been threatened with dismissal for using the toilet and barmen working 80 hours in a week. Whoever I talk to paints the same bleak picture; a labour force in conditions many associate with a bygone era. It seems clear that after 30 years of the neoliberal consensus, the British labour market has changed beyond all recognition.

British workers now have some of the weakest protections of any workforce of the 36 countries that make up the Organisation for Economic Co-operation and Development (OECD) – a fact which former prime minister Tony Blair used to brag about to business leaders, but which is starting to show in some of the appalling workplace abuses that British workers are forced to endure. This is of course, no accident and these sorts of practices are entirely predictable for a nation which has waged war on organised labour and actively strived to make labour more ‘flexible’. 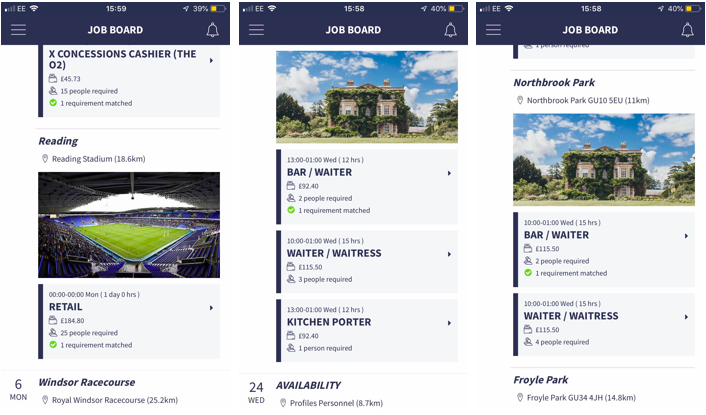 Typical shift patterns given to Laith and colleagues in the past.

The British working class has suffered a precipitous fall in wages coupled with the huge growth in employment, something most economists thought was impossible until a few years ago. Talking with these workers it is clear that the British labour market seems to now be characterized by the notion of ‘shit jobs for all,’ where there’s plenty of work for those willing to accept huge commutes, poor pay and unpaid overtime. Thatcher and her ideological acolytes dreamed of these competitive labour markets, where pesky impediments such as unions or regulations would no longer chain industry. However, the most alarming legacy of this can be seen today, where regardless of the employment rate, wages cannot increase because bargaining power just isn’t there for an atomized, replicable precariat.

“Have you thought of unionizing?” I ask George as we fold some tables. “You must be joking,” he replies, with a wry grin creeping across his face, “if this job has taught me anything, it’s to never make trouble, I know there’s 10 people behind me just waiting to get these sorts of hours”.

This is the narrative I hear time and time again, dissatisfied workers who have no means to articulate their grievances. It’s true, I’ve been around agency workers on-and-off for about 3 years and not once have I seen a union flyer, a picket or even any talk of organising. So, George does what all the others do, he tolerates it, he almost seems grateful for it and proud of his protestant work ethic.

This is arguably the greatest achievement of the neoliberal labour market: that workers internalize their atomization. Neoliberalism has penetrated workers psychologically, making them so isolated and precarious that organizing feels all but impossible. It is this attitude that explains why wages have fallen with unemployment, workers are less cocky, more insecure and cannot afford the luxury of wage negotiations.

And this isn’t just true for agency workers. With the ascent of the gig economy, the self-employed sector and part-time work, it seems that all around us in Britain, working people are being forced to take a settlement that their parents never would have accepted.

Dan and George are by no means alone, workers in all sectors are feeling the same squeeze. However, it is ultimately workers like them who have faced the longest and most dramatic fall in living standards since the Napoleonic wars –  and it’s hardly surprising, because they themselves are fighting a war against a business class and a state that are more concerned with labour as a fluid, replicable force than the workers behind it.

For as long as that neoliberal conception of labour remains, working people can expect similar stagnation and decline. And for those across the country on zero hours contracts who have not even been so much as recognized by Boris Johnson and his government, they know that five years is too long for another Tory government hell-bent on further tearing their rights to shreds.

Laith Saad is a student journalist in Edinburgh writing mainly on labour markets in Tory Britain.