Why We Need a Queer History of the Holocaust

In 1996, the Australian Holocaust survivor Therese Ungar sat down for a biographical interview for the Shoah Foundation. Born in 1923 in Vienna, in 1942 she and her family were deported to Theresienstadt ghetto, before being transferred to Auschwitz in 1944.

There she saw two fellow prisoners being intimate with each other – girls hugging and kissing. It was the first time Ungar had witnessed queer desire. Her reaction was markedly negative. “The girls were most unbecoming and were very, very cruel,” she told her interviewer. Perhaps, Ungar speculated, the explanation lay in the fact that these prisoners had spent much longer in Auschwitz, and that the camp destroyed their sense of decency.

Such a statement comes as a surprise. Ungar was clear that the affair had been consensual, and yet she described it with disgust. Where was this homophobic prejudice coming from?

Homophobia is very common in the testimonies of Holocaust survivors. Independent of where they grew up, whether in assimilated Jewish families in central and western Europe or orthodox communities in eastern Europe, both young and old, survivors have depicted same-sex desire in the camps and ghettos as disgusting and wrong. Remarkably, perhaps, female homophobia is even more pronounced.

Historians, museum workers, and lesbian activists such as Ulrike Janz, Insa Eschebach and Cathy Gelbin have raised the issue of the homophobic prejudice in survivors’ memoirs. These are difficult stories to tell: after all, it is preferable to view Holocaust survivors as carriers of reconciliation and fighters against prejudice. As such, this scholarship has largely gone unrecognized and remains virtually unabsorbed in the English-language context.

These feminist scholars have argued that homophobia within prisoner society was not merely a product of Nazi persecution of gay men (the Third Reich exacerbated the pre-existing and infamous Paragraph 175). Similarly, it is not sufficient to explain a dominant anti-LGBT stance by saying that before the war these parts of Europe were backward; the German movement for the decriminalization of homosexuality in the Weimar Republic is well-known. In 1932, Poland decriminalized homosexuality, and in the following year Radclyffe Hall’s iconic lesbian novel The Well of Loneliness came out in Polish translation.

Rather, the historical context forces us to face a difficult reality: that for the prisoners in the concentration camps, homophobia was a powerful means of exclusion and stigmatization. In the confusing, violent world of the camps, it could be a way to help people make sense of their ‘own’ against ‘evil others’ amongst the prison population.

But who were these queer victims?

Homophobia has had a far-reaching impact on historical memory. At a basic level, there are next to no queer Jews in Holocaust histories. If you find any, they are usually deviant figures. But more importantly, homophobic prejudice has come to shape all the oral history collections of Holocaust survivors around the world. The large USC Shoah Foundation has over 52,000 interviews with Jewish survivors; next to none of them speak about same-sex desire. This does not mean that none of them were queer – I know for a fact that some of them were. But they did not dare to bring it up in the interview given the heteronormative framing of the inquiry. With missing testimonies, it is as if these people never lived and haven’t left a trace, which for survivors of a genocide is a devastating fate.

Five years ago, I set out to to write a queer Holocaust history. In the beginning, I thought I would be documenting an archeology of loss. But through painstaking research in Israeli, Czech, German, Austrian, British, and US archives, interviews with survivors and their children and grandchildren, I have been able to restore dozens of stories of people who, while imprisoned in the camps and ghettos, fell in love or had sex with people of the same sex. (Unfortunately, I haven’t come across any trans histories.)

Let me be honest, even in the context of Holocaust studies this is a hard research. Some people will tell you that queer history is irrelevant and should not be written about. They believe that homosexuality is dishonorable to the reputation of Holocaust victims. Sadly, these lines of enquiry have sometimes led to painful personal attacks on myself; I have had my professional path, research integrity, sexual orientation and family history attacked. But more often, I have been able to change people’s opinions and to show why should we strive for a less judgmental and more inclusive history.

Queer desire in the Holocaust casts a new light on what we know about victim society in the Holocaust, as well as sexuality in general. Some people already knew they were attracted to people of the same sex prior to their deportations, but did not have a name for it; others bartered sex in exchange for food or protection; others still found out through relationships developed in the single-sex environment of the camps that they were, in fact, gay. Sexuality is not clear cut between gay or straight: it is fluid. The fact that even in the most extreme surroundings, people sought human proximity, intimacy, affection and sex shows how much sexuality is a key part of human behaviour to the very end.

One of the most important stories I was able to unearth belongs to Margot.

Born in Germany, she was 14 years old when she was deported to Theresienstadt. There she met the person she described as “the love of her life” – a Viennese girl called Ditha. Margot was inconsolable when Ditha was deported to Auschwitz, and thus, when she and her family were deported there a few days later, reunited with her girlfriend, she was happy – in Auschwitz. When, a few weeks later, the SS closed down their section, Margot decided to leave behind her family, who wouldn’t try to pass the selection (those who did not pass were sent to be murdered) and to go with Ditha, who was now her family. The couple survived forced labor in Hamburg and typhus in Bergen-Belsen. 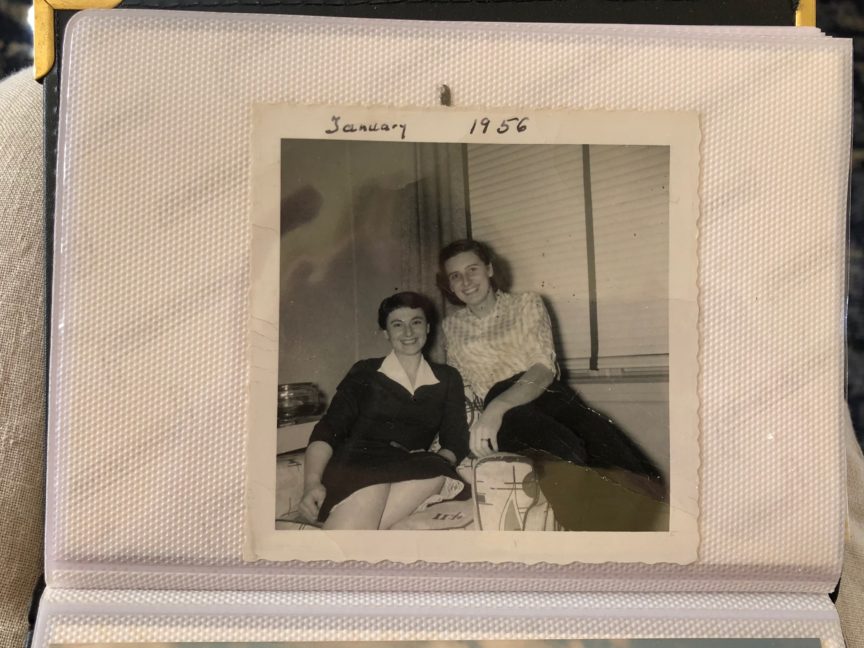 Margot and Ditha. Private archive, provided by the author.

Margot stayed in touch with Ditha for the rest of her life; she moved to New York and became part of the lesbian subculture in Greenwich Village. She married to have children, and later divorced. Three years ago, she finally came out to her family. “What else is new?” they shrugged. Hers is the first testimony of a self-identified lesbian survivor of the concentration camps. I am extremely lucky to have ‘found’ her, not least because amongst testimonies, only Margot’s narrative offers a different perspective to the condemning quote at the top of this article.

The Holocaust is the iconic genocide of our time. Its memory has been often politicized, not least from the political right. Recent years have shown populist politicians around the world claiming that a leftist culture of gender inclusivity and political correctness will lead to concentration camps. At the 2019 commemoration ceremony for victims of Nazism, the late chairman of the Czech Senate, Jaroslav Kubera, stated that today, dangerous totalitarianism comes in a different shape: in form of gender equality, political correctness, and multiculturalism.

Attributing such an offensive statement to a notion of ‘conservative’ eastern Europe would miss the point at hand. The populist wave worldwide is contributing to the disintegration of an inclusive history that is not afraid to pose hard questions. We need a radical, engaged, intelligent history of the Holocaust. One such project is that of queer Holocaust history, which explores human behavior in the most extreme conditions of exclusion and stigmatization, and the human cost of people who were not seen as a worthy part of history. 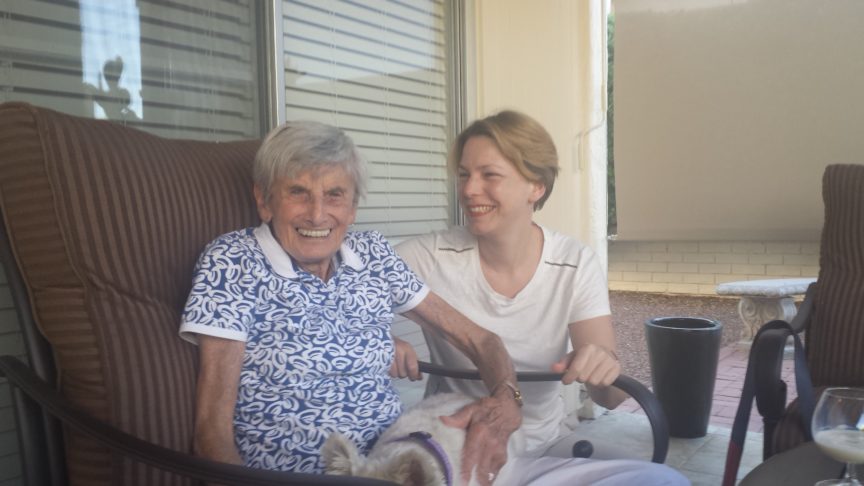 Margot with the author. Author’s archive.

Dr Anna Hájková is an associate professor at the University of Warwick writing a book on queer Holocaust history.

The World According to the Economist with Alexander Zevin

Since 1843, The Economist has been the single most devoted and influential champion of liberalism anywhere in the world. But what exactly is liberalism, and what does the output of the Economist tell us about it?

Opinion: Long-Bailey’s Sacking Shows How Antisemitism Has Been Dangerously Redefined

On Thursday afternoon Labour leader Keir Starmer sacked the lone leftwinger in his shadow cabinet, accusing her of antisemitism. Barnaby Raine traces a recent history of how antisemitism has been redefined by liberals and the right.

Opinion: No, Britain Hasn’t Been a ‘Force for Good’ in the World

Last week at a protest in Poole in defence of a statue, a woman held a sign that read ‘British history matters’. Aaron Bastani argues she's right - and it’s about time we started teaching it.

Victims of Anti-Communism with Vincent Bevins

Aaron Bastani interviews author of 'Jakarta Method', Vincent Bevins, to examine the historic legacy of anti-communism, and the murder programs done in its name.

Victims of Anti-Communism With Vincent Bevins

GE2019: Who Gets to Speak for British Jews? How the Myth of ‘the Jewish Community’ Marginalises Dissent

When the Chief Rabbi or the Jewish Chronicle claims to speak on behalf of "the Jewish community" they do not include all Jews, just the ones whose Jewishness the establishment wants to validate, argues Jo Sutton-Klein.

There’s Something Wrong With Remembrance

Remembrance is viewed through a prism of hyper-nationalism, tasteless militarism and pseudo-patriotism. War veteran Joe Glenton argues that to truly respect the war dead, we must learn the lessons of the past.