What’s the Deal With the Green New Deal?

“One reason we lost the election was that Labour’s campaign lacked a coherent narrative… [because] Labour’s Green New Deal… was tragically undersold… It should have been a core part of our offer,” argues Labour leadership contender Rebecca Long-Bailey. But what would it take for the GND to actually provide a strong framework for leftwing politics in 21st century Britain?

It has become received wisdom that the GND represents some kind of political panacea for the left. It has certainly been an effective rallying point among activists – as witnessed by the groundswell of support witnessed at the 2019 Labour party conference. But it is less clear whether the GND can achieve a mass appeal with voters beyond those already enthused by the speeches of Alexandria Ocasio-Cortez and the writings of Ann Pettifor.

After all, the programme is named for and inspired by a set of policies introduced a hundred years ago, in another country and under very different social and political circumstances. Moreover, the average person in the street would be hard-pressed to explain what the original New Deal entailed; indeed many may have never even heard of it. This means that to be successful the GND must be grounded in people’s everyday experiences and their ordinary aspirations for a better life. In doing so, it needs to offer workers a genuine alternative to the status quo of contemporary British capitalism. Yet how the GND constitutes such a new (green) deal for workers has not been well articulated and remains largely abstract and vague.

A more equitable share in the distribution of national wealth… a new deal for the people.

The original New Deal is often seen as constituting little more than a reflationary policy programme implemented in the wake of the Great Depression. Social security, unemployment programmes, a minimum wage and institutionalised collective bargaining were all instigated in the United States between 1933 and 1939, but the New Deal symbolised much more than just a recovery plan: it constituted a historic compromise between capital and labour that would shape the US for the next 40 years. In a nutshell, the New Deal marked the acceptance by workers of the managerial prerogative in return for higher wages, welfare and collective bargaining. In other words, workers accepted exploitation and, in return, capital accepted limits to that exploitation; as Antonio Gramsci put it, a hegemonic compromise equilibrium came to exist between capital and labour through the concrete coordination of each party’s interests.

The conditions that made this compromise possible were, however, historically specific. Firstly, low wages were leading to a worsening crisis of overproduction due to a lack of effective demand. This meant firms had an interest in increasing wages in order to boost the domestic market for their products. However, employers couldn’t act individually to improve conditions due to market pressures. It required a mass bottom-up worker struggle for protection against insecurity through campaigns for collective representation and state social insurance to force concessions from employers.

Secondly, this movement was greatly aided by the fact that, despite high levels of unemployment, technological developments were providing workers with a new source of power. Integrated continuous-flow production (i.e. assembly lines) increased workers’ bargaining power. Small groups of striking workers could now bring entire factories to a standstill. Elites, meanwhile, feared that strikes and increasing industrial militancy would descend into full-blown rebellion and even working-class revolution. These conditions, then, created a situation in which elites, capital and workers all had an interest in using the state as a means to consolidate and enforce a historic compromise that cemented capitalism.

Fortunately, in recent years, the GND has morphed away from its origins as a romanticised view of the New Deal and is now more commonly articulated as a means of offering an alternative to Tory austerity. It is, nevertheless, crucial to understand that the original New Deal was a success because of this specific historical context in which both firms and elites had an interest in compromise, and ordinary people had the power to force them to do so. Yet this reality is often overlooked, with the New Deal being discussed simply as resulting from the ‘courageous’ actions of Franklin D. Roosevelt. Understanding the New Deal purely as a top-down programme implemented by an enlightened elite erases people as the driver of this progressive social change and obscures the present structural barriers to a similar adoption of the GND by elites.

Unlike in the 1930s, there are now few economic forces pushing firms and elites towards compromising their profits and power. Effective demand is now maintained by debt, not wage growth (despite the Great Recession), and the strength of organised labour is perhaps at a historic low. Therefore, the GND cannot hope to succeed in the same manner as the New Deal: the conditions simply do not exist under which the dominant firms, the super-rich and the elites could be compelled to offer major concessions that run against their short-term interests. What then of its potential as a narrative with which to tie together a left-wing policy programme? Again Gramsci can help us analyse the transformative potential of the GND as a framing for left-wing politics.

From concessions to a transformative class alliance.

Rebecca Long-Bailey argues: “The popularity of our Green New Deal bridges the divides in our electoral coalition, with huge support in the cities and marginals in the south east too.”

What Long-Bailey is getting at here is the potential for the GND to facilitate a socialist hegemony in which the majority of the population are mobilised against capitalism. According to Gramsci, class alliances form from the exertion of intellectual and moral leadership by actors organically connected to a particular class – potentially the Labour party in the case of the GND. This is because a kind of ideological glue is needed to bind the disparate components and interests of such alliances together. For Gramsci, the status quo is maintained through the ‘common sense’ that there is no alternative. But people also carry with them a kernel of socialist ‘good sense’ which develops from their everyday experiences surviving capitalism.

The GND could provide a platform for transforming this socialist ‘good sense’ into a progressive common sense. There is clearly a growing awareness of the risks of environmental degradation and climate breakdown. Polling shows that environmental policy is an increasingly important issue for voters; at present, only leaving the EU and healthcare are considered more important. Moreover, the weight attached to the environment as a political issue is only likely to increase as the disastrous consequences of climate breakdown become impossible to ignore. Indeed, since 2017, the UK has witnessed a massive and growing wave of environmental protest which shows no sign of subsiding. The GND is well placed then to provide the ideological glue to unite both those who would materially benefit in the immediacy from socialist policies and those in the middle class who would otherwise be wary or hostile to increased taxation of high earners, public ownership, and stronger regulation of business.

Due to the relative numerical decline of working class voters (understood in terms of work situation), winning has required that Labour build cross-class alliances since at least the mid-1980s (once voter turnout and blue-collar conservatives are accounted for). If the potential of the GND lies in its ability to bind together a working/middle-class alliance, what does it offer its composite blocs? On the one hand, it quite clearly offers radical state action to achieve a zero-carbon economy and avoid ecological disaster. However, on the other hand, advocates for the GND tend to be rather vague in terms of the immediate benefits for workers.

The offer usually boils down to underdeveloped notions of ‘just transition’ or, more concretely but not particularly inspiringly, ‘well-paid unionised’ jobs. While there is an unmet demand for unions, it remains the case that for 86% of private-sector workers, unions are an alien concept to their lives. A just transition from the current job market to a slightly better paid green one is unlikely to constitute a castle on a cloud with which to capture voters’ imaginations. If the GND is to realise its transformative potential, it must provide a concrete offer for workers as well as sound environmental action – and doing so requires grounding it in the empirical realities of work in 21st century Britain.

A new (green) deal for workers.

In my forthcoming book, Despotism On Demand, I elucidate a workplace regime termed ‘flexible despotism’. Flexible despotism encapsulates the use of insecurity to drive employees to work hard out of fear of arbitrary punishment, the most obvious manifestation being the threat of job loss. Flexible despotism relies on a capricious environment in which there are few employment protections, and as a consequence, recessions in the UK spark widespread fears of job loss. For example, in 2012, 18% of workers felt they were at a high risk of job loss. Moreover, despite the low unemployment levels in 2017, 21% of employees were nevertheless anxious that they might face unwarranted dismissal, while 17% were anxious about potential discrimination and victimisation.

But fear of job loss is not the only source of insecurity in contemporary capitalism; firms increasingly achieve flexibility temporally. As a consequence, 15% of workers experience precarious scheduling, meaning their hours of work frequently change with little warning. This causes 7% of employees to feel very anxious that their working hours could change unexpectedly. Zero-hours contracts are just the tip of the scheduling nightmare. Given this insecurity, it is perhaps unsurprising that 22% percent of workers feel their company doesn’t treat people fairly. And, as the graph below demonstrates, those in working-class occupations are particularly likely to experience this sense of injustice. For instance, 35% of factory operatives feel their organisation treats people unfairly. 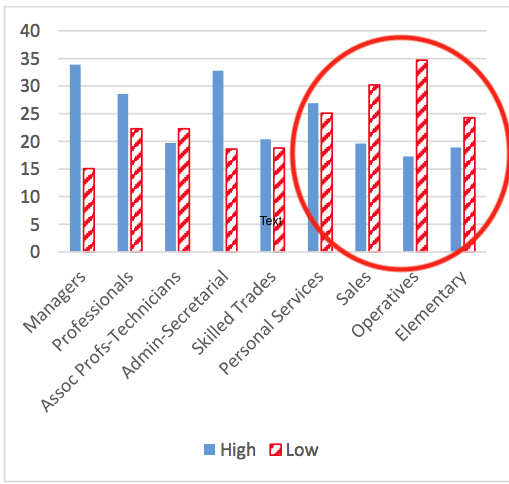 In addition to insecurity, fear, work intensity and overwork, many jobs are simply not stimulating or challenging and do not enable the development of intellectual capacities. Complex problem solving does not constitute an important element of work for 45% of employees, and self-planning is largely absent from 60% of jobs. Meanwhile, the number of roles requiring literacy and numeracy skills has declined since 2012. Likewise, the learning and training time required to do the average job has been declining since 2006. Unsurprisingly, deskilling is a further source of anxiety in the workplace, with 31% of employees anxious about losing influence in how they do their job, 25% fearing that their job will require less skill, and 24% concerned that their job will become less interesting.

The old world is dying, but the new one is yet to be born.

So what can a new (green) deal offer us as we come face-to-face with ecological breakdown and unrelenting inequality? The political terrain of the 21st century offers little potential for the kind of class compromise that cemented capitalism in the 1930s. Instead the GND must provide a counter-narrative to the common sense that there is no alternative to unrelenting inequality, suffering and climate change. In short, it should provide way to talk about how saving the planet can also end insecurity, injustice and anxiety at work.

The GND can provide the language with which to articulate the good sense that capitalism cannot protect the environment nor overcome the daily despotism, fear, and denial of human potential that millions face at work. Elaborating this new good sense requires that GND movement engages, listens to and organise with workers in order to build a shared collective politics that is truly rooted in workers’ everyday experiences and aspirations for a better life. Only then, to paraphrase Gramsci, will it be possible for a new world to be born and the climate crisis averted.