The leaked report into ‘The work of the Labour Party’s Governance and Legal Unit in relation to antisemitism, 2014 – 2019’ may not make the Booker longlist, but it still supplanted Hilary Mantel’s latest as everyone’s new favourite 800 page magnum opus on the horrors of political bloodletting.

Compiled internally to submit as evidence for the EHRC’s investigation into antisemitism, the leaked report lays bare a working culture at Labour HQ more toxic than if you’d cooked down all my exes and reduced them to a glossy jus.

Much has been made of the document’s allegations of misuse of funds, electoral sabotage and WhatsApp exchanges which oscillate between the puerile and the downright poisonous. But what the report detailed about the Labour party’s culture war over racism has repercussions far beyond its own internal bureaucracy. Its implications have the potential to drive deeper divisions between marginalised communities for years to come. 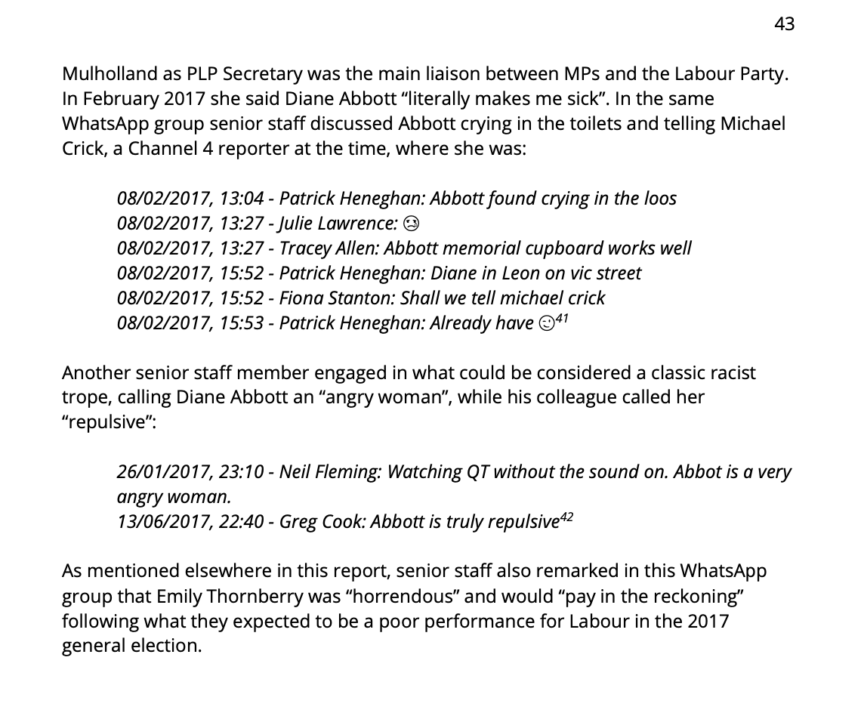 For the past few years, antisemitism has been considered largely apart from other forms of racism. That phrase, ‘and all other forms of racism’, has popped up with dizzying regularity in the Labour party’s official missives in order to acknowledge that there are indeed miscellaneous bigotries which are also Very Serious Matters.

There are some good reasons for this. Antisemitism can take distinct forms when presented in leftwing guises: not just as the oft-quoted ‘socialism of fools’, but as a particular distortion of anti-imperialism, in which Palestinians are often spoken of but rarely spoken to. The leaked report does identify behaviour from confirmed Labour members which falls into this category: those hoping for a full exculpation of the party membership may find themselves disappointed.

However, understanding antisemitism through a wholly partisan lens and considering it apart from racism at large, has meant there’s been something of a blind spot when it comes to antiblackness and Islamophobia in the Labour party. And indeed, the leaked report exposes a culture of complacency and cruelty when it comes to both these forms of racism when it served a factional purpose.

Allegations regarding a sitting Labour MP’s pattern of Islamophobic behaviour, including referring to a local Bengali wedding as an ‘Islamist plot’ were, the report alleges, rejected by then-general secretary Iain McNicol in a letter drafted by John Stolliday as the complainant was a councillor for rival party. 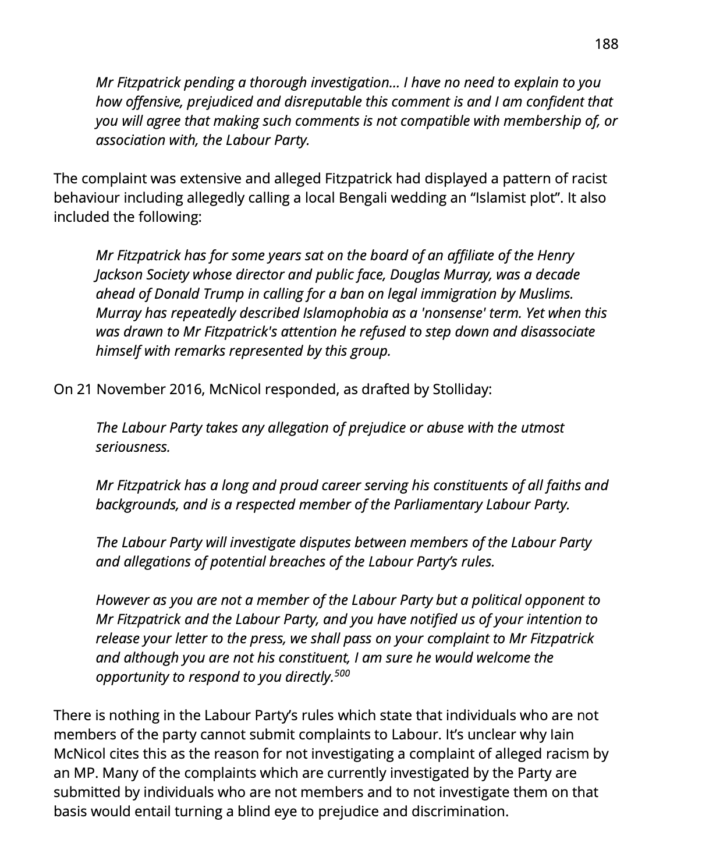 A staffer in the policy unit shared a clip of Douglas Murray after the Westminster Bridge attack, in which the commentator argued that terrorism “comes from the religion” of Islam. The staffer spoke of the need for “hard questions – even for so-called moderate islam”, holding Muslims to a level of collective responsibility that, under Labour’s later adopted IHRA definition, would be considered racist if applied Jewish people.

Alongside a pattern of minimising and delaying complaints regarding Islamophobia for factional purposes, the report details a level of vitriol directed at black female MPs by senior anti-Corbyn staffers that’s nothing short of despicable.

Dawn Butler’s appointment to the shadow cabinet was met with scorn, specifically due to her highlighting of racism within the Labour party. Diane Abbott was labelled as “a very angry woman”, “repulsive”, and one staffer in a key role liaising with the PLP said she “literally makes me sick.”

But one WhatsApp exchange, which took place in February 2017, is quite frankly astonishing in its viciousness.

The report quotes messages from senior staffers in which they said that Diane Abbott was found crying in the toilets. Someone suggests feeding this information to Channel 4 reporter Michael Crick, to which the report alleges Patrick Heneghan replies “already have.” He would have been Labour’s executive director of elections, campaigns and organisation at the time.

What puts this beyond the quotidian malice of Westminster politics is that, matching up the dates with news reports, this coincided with a period of gruelling racist abuse culminating in a police complaint being made. Labour party staffers – whose plenty comfortable salaries were paid by the very members they reportedly loathed – saw, in one of their own MPs being reduced to tears over targeted racial harassment, an opportunity for her further humiliation.

It’s not simply that this stuff is nasty – politics is, after all, a blood sport. It’s that selective objection to racism for factional purposes put Jewish members in the firing line of an internecine battle, pitted communities against one another, and threw black and Muslim members to the wolves. In an attempt to grind out domination over the Labour party machinery, these staffers abandoned any claim to actual antiracism.

This has had far-reaching implications for the terrain of British race relations. The poison spread – in no small part due to the press’s insatiable appetite for Labour antisemitism stories – on the basis of factional utility rather than the principles of solidarity. Islamophobia in the Conservative Party was minimised; in the Labour party, it was ignored.

As for antiblackness, legacy media outlets could hardly criticise it in others and preserve its own coverage of Diane Abbott and Dawn Butler. In short, the internal politicking of the Labour party reinforced a hierarchy of racism nationwide, in which Muslims and black people were placed squarely at the bottom.

Keir Starmer and Angela Rayner have issued a joint statement, commissioning an urgent independent investigation into how the report came to be, its content, and how it entered the public domain. It’s reasonable to hope for the new management to bring in a change bureaucratic culture, the political questions raised by the report can only be resolved by political means.  That is to say, like economic production under socialism, it’s very much everybody’s business.