On the same day official figures showed Britain has the highest number of deaths from Covid-19 in Europe, the chancellor, Rishi Sunak, chose to raise the prospect of ending the economic support needed to support the lockdown.

Take-up for the job retention scheme, in particular, has (predictably) exceeded the government’s risible early forecasts – a surefire early indicator of the scheme’s necessity and something that should be telling the Treasury, loud and clear, that attempts to remove them too quickly will be disastrous. Two-thirds of businesses are still applying to use the scheme.

The support offered has been significant, but has not been universal: plenty of people still fall outside of the various schemes’ scope. To speculate now about removing the support that is there – with no vaccine, infections still occurring, and dangerous uncertainty about reinfections – is to simultaneously risk both a public health catastrophe in the form of a second peak in infections and an economic catastrophe in the form of a second Great Depression.

Sunak himself has cited funding concerns over maintaining support, with the cost of the furlough schemes on the official forecasts perhaps hitting £42bn over three months, and extensions costing more. This is a significant amount of money, of course. But these concerns over funding today are nonsense.

The simple truth is that the government is under no significant pressure on raising finances, and nor is it likely to be for the near-term. The interest rate it faces on this mountain of borrowing remains close to all-time lows and there have been no reported difficulties in raising this funding at these low rates from the bond markets. With the Bank of England also offering something like its own overdraft facility to the government – the Ways and Means Facility – there should be no serious concern in government about finding the money to operate the scheme.

There should be simply no question, at all, of easing the provision of income support at present. The extent of expenditure should be determined by the immediate needs of protecting health, and the economy organised around that goal. The chancellor’s real concern, right now, should be with preserving the livelihoods of households and securing the economy against a catastrophic shock to demand.

The pressure to shift, predictably, is political, and is coming from noises off to the Tory right, most notably in the form of the Telegraph, ideologically opposed to state intervention, and from lobbying by big-business Tory donors.

There is a grim competitive logic that drives a rush to end the lockdown ahead of when it is safe to do so, and it is the prospect of stealing a march on one’s competitors: a quick restart for businesses, and the whole economy, means grabbing markets – a pressing concern in what will be a very difficult global economic environment. A rush to restart risks catastrophic costs later, but that doesn’t matter right now. And for the UK, which the IMF is presently forecasting will be one of the worst affected major economies over the next few years, there is a particularly tight competitive logic to doing so. 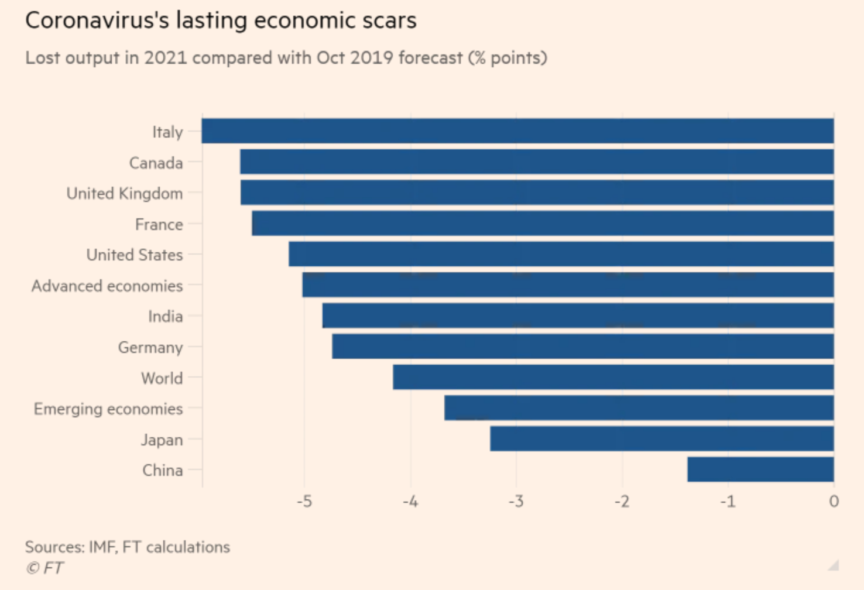 This logic to rush the return was built into the government’s thinking from the start. The furlough scheme was always designed for a rapid rollback. The ability to get out of things is fundamental to how the Treasury and the UK’s major economic institutions think about the world: they don’t want to intervene economically and, when they do, they look for a way out of it as fast as possible – whether this can be done in reality or not.

It’s why the Bank of England’s quantitative easing (QE) scheme, launched back in early 2009 in response to the great financial crisis, used £435bn of Bank of England money to buy almost nothing but government bonds, rather than getting the money into the economy more directly. The theory was that these bonds were very ‘liquid’ and could therefore rapidly be sold back to the market, reversing the QE programme and returning everything to normal, once the crisis passed. (Has this ‘unwinding’ of QE happened? Of course not.)

Elsewhere the same logic lurks behind the idea that, having nationalised great chunks of the British banking industry during the same financial crisis, those banks should be run on a ‘commercial’ basis with a view to privatising them as rapidly as possible. (Has RBS been successfully returned to the private sector? Of course not.)

It’s a deep-seated institutional short-termism and a fundamental belief that, when it comes to the economy, government should do as little as possible – whatever eventually happens in reality. And with a Conservative chancellor sitting in Number 11, the same logic was always most likely to come through on the coronavirus scheme. So it should be no surprise that they’re talking about scrapping the furlough schemes now.

The real economic priorities look like this. First, no-one should be forced to work when it is unsafe to do so. The TUC is absolutely right to criticise the government’s current plans to ease the lockdown. This should go further: those who cannot work in safe conditions should not work. Where a return for work is needed – on a sector-by-sector, industry-by-industry basis – it can only be with the consent of the workforce affected, who have every right to withdraw that consent and their own labour. The rest of us must support those who do.

Second, the furlough scheme should be extended, not rolled back. There is no realistic prospect of anything like a return to more normal working conditions right now. The government needs to accept this situation and maintain the high rate of expenditure to protect lives from the virus, and protect livelihoods from its economic impact. Greater flexibility for the scheme should be built-in to allow for more part-time working, as the TUC, Labour and trade unions have called for.

Third, it is absolutely essential in dealing with the demand shock – the disappearance of vast sums of income from the economy as work is reduced and shops, offices and factories close – that the government keeps spending. If significant cuts to its own spending are made, it is all but certain that we will push this economy into a deep and lasting depression. With household and business debts already high and rising, the disappearance of incomes threatens bankruptcy for millions of individuals and businesses too – half a million companies are reportedly on the verge of collapse. Those bankruptcies will pull us into an economic doom loop as falling incomes drag down spending, which in turn drag down incomes, further reducing spending. In place of bankruptcy, a write-off of household debts could be instituted for the period of the crisis, targeting those households most at risk – which means lower income households. Poverty charities have already raised the demand for a £10bn write-off for the poorest.

Continued economic support from government will be needed as we shift out of lockdown at the pace determined by the requirements of protecting public health. But spending should be targeted, and aimed at creating a very different economy: one that reduces its environmental harm, supports communities, and values what matters most to people. The TUC’s job guarantee proposals have merit here, as do shadow business secretary Ed Miliband’s proposals to create an ‘army’ of zero-carbon workers.

We can start to think (for example) about how our high streets could be rebuilt and redesigned, and how our working practices – from the hours we work, to the time we spend commuting – could be reshaped. Security of work and in work is important, but so too is security outside of paid employment and for those facing grave uncertainty now and in the years ahead, a universal basic income is the obvious solution. Where loans and grants have been given to companies, they should be backed up with clear conditions (as a minimum) on maintaining employment, with the government taking equity stakes as both the IPPR and one Financial Times column have urged.

We should be applying pressure on central government to do this. But if it will not or cannot, it is up to the rest of us: for local authorities to think about how to use the powers they have to rebuild; for local communities to think about how to repurpose their high streets, and preserve essential facilities, from libraries to pubs; and for those in industries facing ruin, like airlines, to begin to devise Lucas Plan-style alternatives from the ground up. We don’t need to go back to the austerity-riddled, insecure, low pay, high damage economy of the past.

James Meadway is an economist and Novara Media columnist.