On the Streets of Minneapolis, the Labour Movement is Supporting the Protests

Unions and other workers’ organisations are standing in solidarity with protesters in Minneapolis, as the uprising against the murder of black American George Floyd spans a second week.

Floyd’s story is familiar to most of us now: on 25 May, Minneapolis police officer Derek Chauvin detained Floyd after the 46-year-old was accused of trying to use a counterfeit $20 bill in a grocery store. After Floyd was in handcuffs, while three additional police officers looked on, Chauvin forced him onto the street and kneeled on his neck for over eight minutes until he was unresponsive. Floyd was taken to a hospital where he was pronounced dead shortly after.

Less than 24 hours after his death, members of the Minneapolis community began gathering, organising, and participating in what is now being referred to as an unprecedented rebellion.

Among the protestors, mutual aid organisers, and rioters, workers and labour organisers have played an integral role in the struggle.

Located a block away from the street where Floyd was killed, Centro de Trabajadores Unidos en la Lucha (CTUL) is dedicated to empowering workers by equipping them with the tools they need to improve their labour conditions.

The day after he was killed, CTUL issued a statement mourning Floyd’s death, condemning police violence and highlighting work the centre did in 2019 to pressure the city council to reduce the Minneapolis police budget.

By Tuesday 26 May, in the afternoon, hundreds of people had begun to gather at the site of Floyd’s death.

Isabela Escalona, a communications officer for CTUL, said the centre’s members – who are mostly people of colour – sprung to action.

“We knew people were going to be on our block, and it’s on us to keep people safe,” Escalona said.

“We know this is not new; police have not protected us,” she continued. “We know that policing isn’t for community safety, it’s for control. Control of property and corporate interests and the one percent.”

When the protests started, CTUL organisers and members worked their way through the crowd offering people masks and water. Over a week later, the CTUL office is still handing out supplies, including food.

CTUL exists to help make the community safe, Escalona explained. “If we’re going to talk about what’s hurting our community, it’s extraction of wealth,” she said. “Because when folks don’t get their wages they can’t afford food, they can’t take care of their families, and we can’t afford our homes, and that’s when you start seeing crime and issues in our communities. 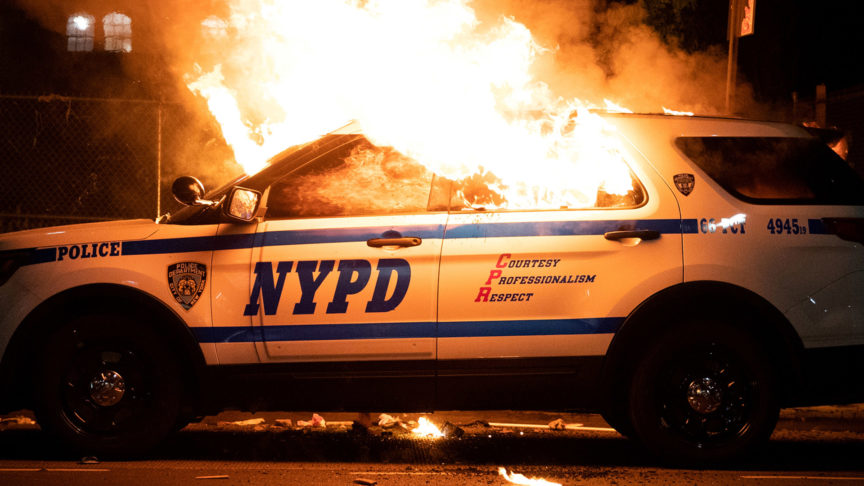 A police car is set on fire as protesters clash with police during a march against the death in Minneapolis police custody of George Floyd, in New York. REUTERS/Jeenah Moon.

Elsewhere in the city, other workers’ groups have shown solidarity too.

After the first night of protests and rioting, transit union ATU issued a statement of solidarity, with some bus driver members refusing to transport police to protests or arrested protesters to jail.

“Sex workers are, unfortunately, intimately familiar with the violence of living in a police-state,” said SWOP organiser Jayne Swift, pointing towards a long history of antagonism towards sex workers by police.

“We can create safer and thriving communities by listening to and learning from BIPOC [Black, Indigenous, and People of Colour] organisers, sex workers or not, and others who have necessarily developed mutual aid as a strategy for surviving violent societies,” Swift added. 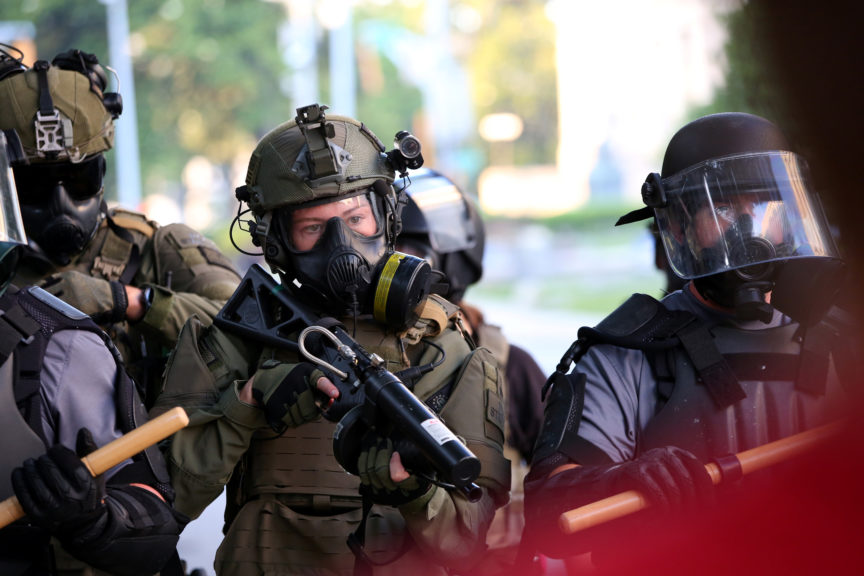 On 31 May, 500 union members and officials gathered at the home of district attorney Mike Freeman to demand he prosecute all four officers involved in Floyd’s death.

“Mike Freeman relies on union activists to get elected. He needs to know that labour stands with our communities in demanding #JusticeForGeorgeFloyd and that #AnInjuryToOneIsAnInjuryToAll.”

A number of other unions, both locally and internationally, have made similar statements explicit in their stance against racist police violence and in support of the protestors, including Education Minnesota, National Nurses Union (NNU), United Auto Workers (UAW), and Unite Here! Local 17.

“There is no room for white supremacists in our movement. The Police Officers Federation of Minneapolis is not, nor has it ever been a member of the Minnesota AFL-CIO. Bob Kroll and those who have enabled violence and brutality to grow within police ranks do not speak for us.”

That such a powerful organisation is explicitly connecting the police to white supremacy is an important win, given the federation’s reach; Minnesota AFL-CIO represents over 1,000 local unions in the state.

Workers groups are also organising for their members to donate their skills in support of protesters.

The North Star Health Collective is a group of radical health organisers, including union nurses, doctors, and EMTs, who have been acting as on-the-ground street medics. This has been of particular importance since the escalation of police violence – including the use of pepper spray, tear gas and rubber bullets – has led protestors to endure nightly injuries.

Most adults are workers, or have been workers. George Floyd was a worker. So it’s powerful when unions and other worker organisations stand in explicit solidarity with protests against police violence.

It makes clear that these cries for justice aren’t just coming from fringe activists, but from the people.

Raechel Jolie is a writer and activist in Minneapolis.