What Next for Lebanon’s Left?

Almost a year to the day since Lebanon’s “October revolution” forced the resignation of prime minister Saad Hariri, a group of beleaguered revolutionaries again marched through the streets of Beirut last week – this time protesting Hariri’s inevitable reappointment.

Facing antagonism by pro-Hariri counter-protesters, the march was redirected by the military and internal security forces (ISF) through an area known colloquially as ‘Solidere’. A sterile shopping district built on the ruins of Beirut’s old Souqs, Solidere is seen by many as a physical manifestation of the entrenched corruption and patronage politics Lebanon’s revolution sought to overthrow. Once a symbol of the city’s cultural and intellectual vibrancy, the heritage site was ‘redeveloped’ after the civil war into its sterile and exclusionary present through the political machinations and financial clout of the former prime minister Rafic Hariri, whose wealth and political position his son, Saad, inherited.

The glaring symbolism of a protest against Hariri’s reappointment being forced to march through Solidere paints a bleak picture of Lebanon’s progressive movement. However, in reality, the revolutionary movement and the activism that preceded it provide a remarkable lesson in creating space for progressive ideas in an environment where structural barriers and physical intimidation conspire to push leftist groups to the margins of politics. 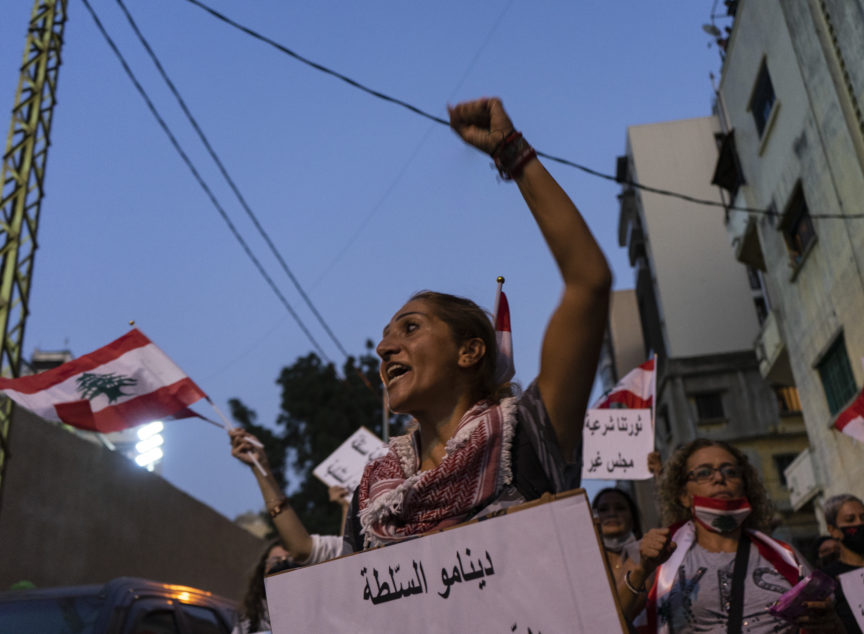 In the days and weeks following the “October revolution”, which saw one million people (20% of Lebanon’s population) across the country take to the streets, the physical reclamation of Solidere and downtown Beirut for the Lebanese people was an unprecedented victory. The Versace and Yves Saint Laurent stores, which are inaccessible to most Lebanese, were shut down, their shopfronts destroyed. The streets became a stage for Lebanon’s cultural and intellectual vibrancy as activists paraded through, denouncing Lebanon’s corrupt political class and demanding rights for women, LGBT+ and other oppressed groups. Tents were erected in a nearby car park, where leftist parties and progressive grassroots movements hosted debates and talks, sharing ideas and providing a real alternative to mainstream political narratives. 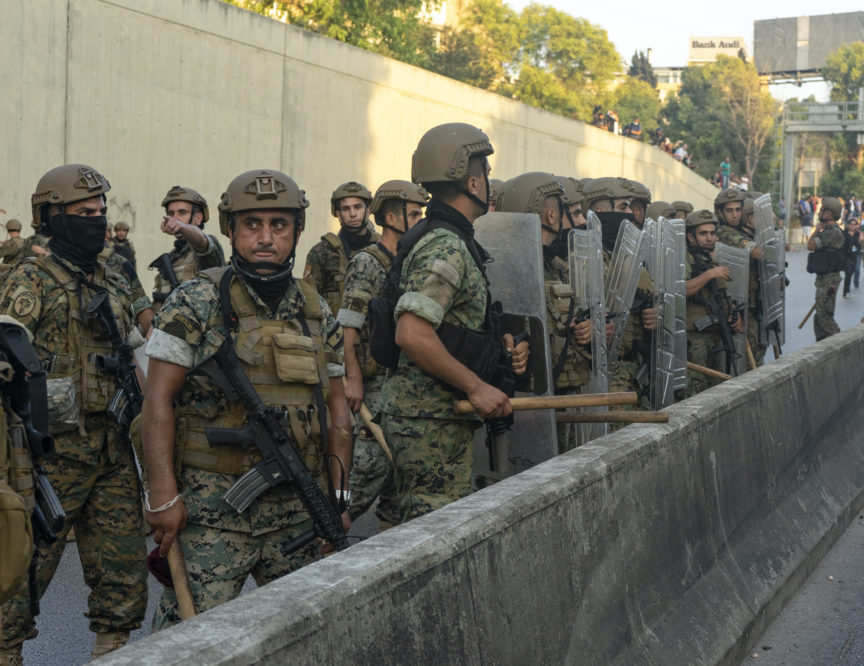 The vibrant intellectual space created by Lebanon’s revolution was a glaring contrast to the country’s politics as usual. Throughout Lebanon’s history, its people have always been at the behest of political elites, who created an entrenched system of political patronage that deepened sectarian divides and precluded the free exchange of ideas. Following the country’s civil war from 1975-1990, a settlement allocated political positions on the basis of sect, reinforcing this system, binding people to patrons and making elections farcical at best. Any challenges to power, including by progressive political movements, were systematically and often violently suppressed.

And yet, building on Lebanon’s rich intellectual history, leftist and progressive groups have always continued to organise on the margins. The Arab Spring protests that shook the region in 2011 galvanised Lebanon’s leftists to reclaim space in the centre of the country’s politics. Movements such as the 2015 “You Stink!” campaign, borne out of the waste management crisis, and the subsequent 2019 October uprising, laid bare the failings of the Lebanese state.

For progressive groups in Lebanon, the systemic change that would see the overthrow of Lebanon’s political elites’ stranglehold on the country must start from the bottom up. A priority across leftist groups and movements has therefore been to initiate and support grassroots organising across Lebanon. Li Haqqi is perhaps the most prominent of these groups. Primarily made up of young people, who do not identify with the sects and politics of old, Li Haqqi started off as an electoral campaign in 2017.

“We could not compete, we did not have the resources to run a conventional campaign against the regime,” explains Maher, a researcher who organises for Li Haqqi. “So we initiated a grassroots campaign, creating several units in the region”. This campaign gave members a direct say in the party’s political programme, Maher says, and allowed them to choose their own political candidates. “The decentralised campaign had hundreds of members, all with a sense of ownership,” Maher says. “We managed to get 10,000 votes in the one district.”

While Li Haqqi was unable to secure a seat in the region, organisers seized the momentum from its unexpected popularity to evolve the campaign into a national movement grounded in the same political and organisational principles, with social justice and direct democracy at its core.

Li Haqqi was one of several groups to call for a protest in October last year. No party or group has attempted to lay claim to the spontaneous action taken by the hundreds of thousands of people who left work and took to the streets on the 17 October 2019, but several progressive groups, pushing for a truly secular state, made sure they had a presence at the revolution and a role in shaping the discourse. 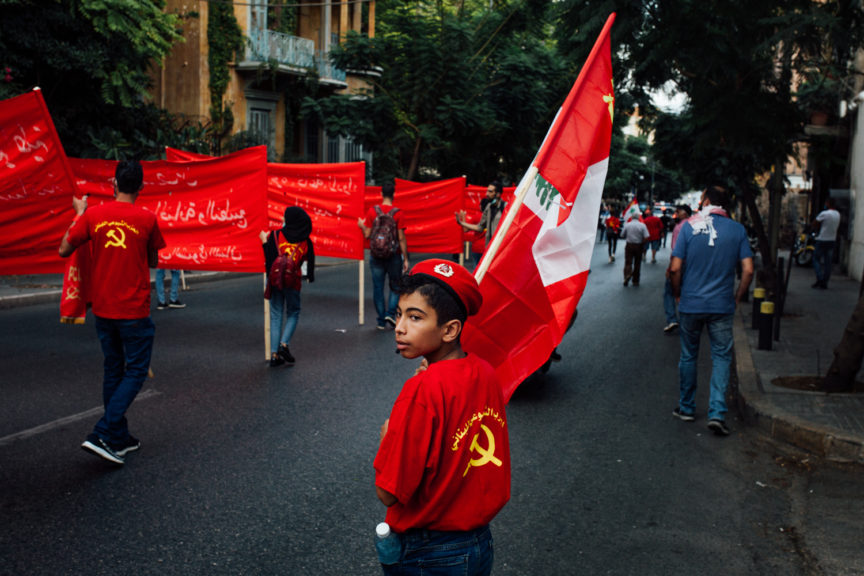 But while groups like Li Haqqi had unprecedented success during last year’s uprising, the Hariri’s reappointment shows the strength of the political elites they are up against.

Meanwhile, leftist groups face numerous structural and situational barriers to promoting alternative ideas and approaches. From political violence perpetrated by security forces and loyalist thugs affiliated with the sectarian political parties, to nationwide coronavirus lockdowns rumoured to have been enforced to prevent protest and clear the revolutionaries’ spaces, to the crushing effect of a national economic collapse, the challenges to continued activism are immense.

When asked what the international ‘left’ could offer in solidarity, Maher is quick to answer. “We feel we are isolated in Lebanon. Especially the left. England is an island, but it is harder to reach Lebanon. We are not well covered. Even the foreign media favours conventional politicians and their agendas. This is the main issue for us, the main problem. We need media presence and support.”

Rani al Rajji, an activist from the Citizens in a State Party, which was set up in 2016 to oppose the current political regime, agrees. “This is a watershed moment,” he says. “This has the potential to shape movements in other countries in the area. We don’t seek money, or directions, we seek attention and awareness.”

With or without international solidarity it is clear that Lebanon’s progressives intend to continue the fight. On the night of the protests against Hariri’s reappointment, counter-revolutionaries set fire to a giant fist erected in the heart of downtown as a symbol of resistance. This could have signified the end of the fight, but instead, residents awoke the next morning to find a new statue erected in the ashes.

Matthew Kynaston is a multimedia journalist based in Beirut, Lebanon.