Cleaners at the University of London have won staff contracts after almost a decade of struggle, marked by regular strikes and mass boycotts of university events and buildings.

From this week, between 60 and 80 cleaners who were previously subcontracted by outsourcing firm Cordant will join other University of London (UoL) workers on in-house contracts, securing increased annual leave, a pay rise, ‘dignified’ pensions and enhanced parental leave – rights which, they point out, they never should have been denied in the first place.

For the Independent Workers Union of Great Britain (IWGB) this is the latest victory in a “relentless” campaign against outsourcing, which also saw receptionists, porters and security guards employed directly by the university earlier this year.

Today, all cleaners on the University of London contract have been brought in-house, following a relentless campaign that led to the in-sourcing of their reception-based colleagues and security officers earlier this year. (thread) pic.twitter.com/LBe8encJMg

Onaily Carreno, who has worked as a cleaner at the UoL for five years and organised with the IWGB throughout that time, said the most significant change for her will be better parental leave.

The Dominican mother of two, who was on statutory maternity leave during the pandemic, following the birth of her second child, is now entitled to substantially better maternity pay.

Speaking to Novara Media via a translator, Carreno said: “My focus has been to never lose the vision and to face what is in front of us, and to fight – fight for our rights as workers.”

Like many union members, Carreno said she gave her all to the campaign, attending numerous meetings, protests and demonstrations over the years.

Although the University first announced it would bring cleaners in-house last October (simultaneously agreeing to bring security officers in-house six months earlier, in May), the IGWB’s fight continued until this week, its focus turning to maintaining pressure on the university to set a date and stick to the agreed process.

For the IWGB, one of the biggest challenges throughout has been supporting striking workers financially – the small union operates with very low resources, relying on crowdfunding and public support.

Maintaining the campaign’s momentum throughout the pandemic has been a challenge too. According to Liliana Almanza, who has been a cleaner at the university for eight years and a union member for six or seven, what was a ‘very active’ campaign over the last few years has been complicated by the pandemic.

Also speaking through a translator, Almanza, who is Colombian, said:

“It was really difficult to keep the energy up at times. I was one of the workers that kept coming into work when the universities were empty during the first lockdown. It was terrifying to work during that period.

“When students started coming in again, we did not know where we stood – whether students would have to be quarantined, whether they would come at all, whether we would be left without work. We lived in fear.”

Even with the new contracts, Almanza added, “we are scared now because of the second lockdown, as workers are still at risk”.

Nevertheless, she said: “We now have so much hope and this is a great victory in terms of rights such as holiday pay and pension access…. Without the support of the union, we wouldn’t stand a chance.”

For the IWGB’s UoL branch chair, Maritza Castillo Calle, the pandemic has highlighted the resilient solidarity among workers, who managed to keep organising online. “We have a strong connection with our workers so we were able to maintain organising virtually, with phone-banking and zoom meetings,” she said.

Castillo Calle said the campaign had influenced others, including IWGB’s UCL campaign, which has “definitely benefited from the momentum of the UoL success.”

“It has been so significant as an inspiring story,” she continued. “It provides an example to other workers across the country about the power of fighting together for dignified conditions. People are taking note.” 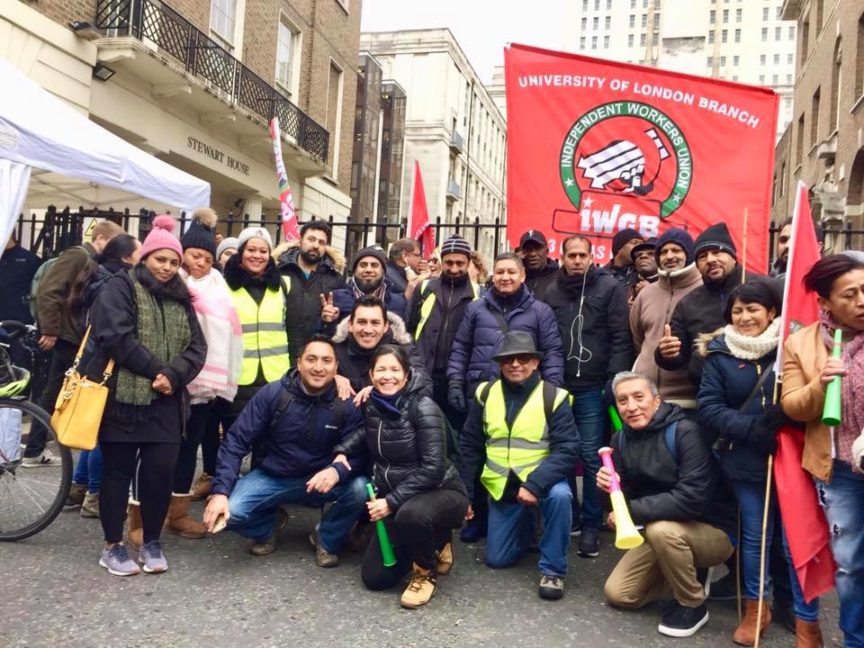 The campaign to bring university workers in-house gained serious momentum in 2018 when it was catapulted into the public eye. Movements like the Senate House Boycott, signed by the University and College Union (UCU) and organised by IWBG, garnered support from students across the UK as well as high-profile politicians and academics, including John McDonnell, Owen Jones and the late David Graeber.

The IWGB’s current president, Henry Chango Lopez, has been involved in the campaign from the beginning. Once a cleaner himself, he began to organise with the IWGB in response to the exploitation he encountered. Over the phone, he recounts the campaign’s trajectory from its inception – “that moment we decided to go out with drums and vuvuzelas because we were not paid a salary for one or two months” – right up to the recent victory.

The university could have saved the damage to its reputation, he added, if it had simply brought workers in-house “a long time ago”.

“[I feel] very proud of what we have achieved because outsourcing is one of the biggest problems in society,” he explained, “it creates discrimination, it even creates racism… and that’s the reason we are fighting outsourcing everywhere”.

He added: “I think we are leaving a legacy for a lot of workers, and we have shown that when workers organise, unite and fight together, they can win and they can win big.”

Although this week marks a significant milestone for the IWGB, there is still work to be done, including bringing other workers, such as caterers, in-house, maintaining the cleaners’ contracts, and working to ensure that nobody’s job is cut during the pandemic.

The union is also focusing on organising workers from other universities to oppose outsourcing.

“This victory does not mean we stop fighting and supporting each other,“ Carreno said. ”On the contrary, we keep fighting with more strength and energy with our union – hasta la victoria!”

Polly Bindman is a freelance investigative journalist based in London.