All Eyes Are on the White House, But a Republican Senate Would Define a Biden Presidency

With the vote count now virtually complete in Michigan, Wisconsin, and Georgia, it seems all but certain that Joe Biden has done enough to limp his way to an underwhelming victory in the race for the White House.

Now, with Trump filing law-suits against the electoral process in key swing states, and launching a vitriolic tirade to incite violence amongst his base, the US is bracing itself for a renewed wave of nationwide unrest.

But if the legal and political tumult is negotiated, and the dust settles on the highest turnout election in 120 years, a Democratic president and a divided Congress could once again spell disaster for the American people.

On Wednesday afternoon, the Democrats’ hopes of reclaiming the Senate were dealt a near-fatal blow when Susan Collins, (infamous for her role in the confirmation of Supreme Court justice Brett Kavanaugh), defeated Democratic nominee Sarah Gideon in her bid for the seat in Maine.

Now, barring a miracle result that would see both Georgia Senate seats proceed to a January run-off – and two subsequent Democrat victories – it seems inevitable that the GOP will retain control of the upper chamber – and with it the legislative agenda.

Since fending off Republican challenges in key seats in the mid-term elections in 2018, the Democratic establishment, headed by minority leader Chuck Schumer, have staked much of their political capital on wrestling the Senate back from the clutches of Republican Majority leader Mitch McConnnell in 2020.

Hand-picking candidates and backing them through the primary process, Schumer’s strategy mirrored a wider party approach that was epitomised at the Democratic National Convention in August: Entice disenchanted red voters in the suburbs by picking Republican-lite candidates with watered-down conservative politics.

As progressive Democrats were sidelined by the leadership, Schumer threw millions of dollars into his appeasement slate. And by the time of the election on Tuesday, upwards of $350m had been spent on Senate races in South Carolina, Kentucky, Iowa, North Carolina, Maine and Montana. Meanwhile, in West Virginia and Tennessee, where progressive Democrats claimed the nomination, candidates were comparatively starved of resources – $1.1m and $400,000 were spent respectively on the races of Paula Jean Swearingham and Marquita Bradshaw.

Amy McGrath, who raised upwards of $100 million, did about 2 points better than Marquita Bradshaw did in Tennessee on a shoestring.

Mute or block the account of any grifter who told you to give your money to Amy McGrath. Or don’t, it’s your money, do what you want. pic.twitter.com/TA6ov512Rk

By prioritising a fictional perception of electability over a substantial policy offering, the Democratic leadership utterly failed to recognise the desperate material reality of suffering voters on the ground.

Rejecting popular progressive candidates rooted in their local communities, and instead pandering to the radical centre, Schumer ultimately crippled the party’s chances of winning in vital Senate seats. Relying instead on a Trump backlash, the Democrat party machine displaced any meaningful choices from the ballot, ruinously underestimating the possibility of voters picking both Biden for president and their Republican Senate candidates.

Republicans defied the polls in the House and may be on track to pick up 7-12 seats. A few takeaways:

As it stands, the Democrats have only successfully flipped two seats. Wins for Mark Kelly in Arizona and John Hickenlooper in Colorado are offset by an emphatic, but not unexpected, defeat for Doug Jones in Alabama, leaving the Senate precariously poised. The only remaining competitive seats are both in Georgia, which has a state law ruling that if no candidate receives a simple majority of 50% plus, the top two advance to a run-off election. 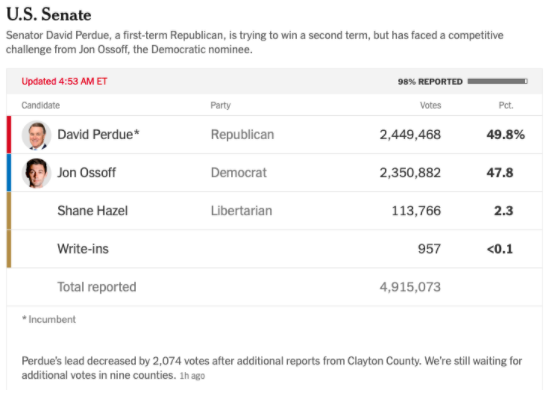 Screenshot from the New York Times.

Republican David Perdue has now dropped under that threshold, meaning that he will likely be forced into another tight contest with Democratic challenger Jon Ossoff again in January. Likewise, the second seat in Georgia – up for grabs after the resignation of incumbent Republican Johnny Isakson due to health concerns – will also be contested in a run-off between popular Democrat reverend Raphael Warnock and Isakson’s immediate successor, Senator Kelly Loeffle.

If the Democrats successfully flip both seats on 5 January 2021, then the Senate will be locked at 50-50, giving vice president Kamala Harris the power to cast the final vote in the event of a tied poll and thus giving the Biden administration the upper-hand in both the legislative chambers and enable – at least in theory, if not in practice – the possibility of significant policy reform.

We are, however, still a long way away from that unlikely scenario right now, and given that many pollsters were predicting a relatively straightforward Senate flip, Schumer’s failures are nothing short of disastrous for those with hopes of substantive legislative action during a Biden presidency.

In a divided country, another divided government means years of pain.

“divided governments are less intrusive, less willing to unleash tax rises and regulation on corporate America and yet, in the event that Mr Biden does prevail, still keen to proceed with fiscal support.” https://t.co/i2xWVUSdhi via @FT

Since the 2016 election, McConnell and the Republican Senate have been fundamental to the implementation of Trump’s political agenda, killing Democratic proposals from the House, and stacking the courts with conservative judges from the Federalist Society (Brett Kavanaugh is among them).

To see what a Republican legislature would do with Biden in the White House, requires only a brief glance at Obama’s tenure. Between 2010 and 2016, Tea Party Republicans in the House of Representatives pushed painful austerity politics and waged a perpetual war on the president’s one legislative ambition: healthcare reform.

But where Obama was blessed with a two-year majority in both chambers and a six year-majority in the Senate, it appears Biden will be afforded no such luxury. The same goes for the political situation Biden will be inheriting; while Obama took office in the midst of a recession, Biden will take the reigns in the context of not only an economic crash, but an immediate public health emergency, and an intensifying climate catastrophe.

If there was ever any meaningful intention behind Biden’s platform (and his campaign’s singular rhetorical focus on Trump’s failures might suggest there was very little), his limited commitments to policy changes are now doomed to fall on the sword of McConnell.

Say goodbye to the ‘Medicare-like’ public health insurance option, or the ‘not a Green New Deal’ climate agenda; the next four years is going to be a legislative slog. And with the GOP sure to fight over every single federal dollar, for millions of Americans in desperate need of immediate assistance, another divided government spells financial ruin.

Sadly, I think @AaronBastani is spot on here. It’s why if Biden does win I’ll be so relieved, but I won’t be cheering. #TyskySour pic.twitter.com/HkUMZmzoAC

And then, of course, there’s the Supreme Court. When the Senate flipped red in 2014, Republican leadership spent two years blocking Democratic appointments – most famously in the case of Supreme Court nominee Merric Garland.

There is no doubt that the same will be done to Biden. As Trump’s newly anointed justice Amy Coney Barret takes her seat on the nation’s highest court, the six-three conservative split fulfils McConnell’s aim to fundamentally alter the ideological structure of the US court system.

Whether or not the incoming administration would have succumbed to pressure and redressed this systematic imbalance now becomes ultimately irrelevant, a Republican Senate will deny any potential presidential nominees.

Instead of the systemic change necessary to address the deep fault lines in American society, the next two to four years now promise incrementalist bluster and jostling for dominance of the media spectacle. For nearly 100,000 people falling ill every day from Covid-19, or the 12.5m unemployed, the prospect of another divided government spells imminent disaster.

Where do we go from here?

Despite this depressing reality, from a progressive perspective, there is still some cause for hope. With intense focus on the presidential election and Schumer’s disastrous bid for control of the Senate, a significant expansion of the Democrats’ progressive wing in Congress is being missed for the milestone it is.

The 117th Congress will be the most diverse in the nation’s history, with more people of colour and more women than ever. Each member of the ‘squad’ cruised to reelection, and they will be joined on the hill by fresh allies such as Cori Bush, Jamaal Bowman and Mondaire Jones.

What’s more, progressive organisations are already mobilising behind key Senate seats in 2022. With Harris vacating her seat to become vice-president, a rare opportunity will open up in California to elect a progressive Senator; whilst leftists are already enjoying the prospect of a progressive challenge to Schumer’s own seat in New York.

This new slate of candidates, running on popular policy-based platforms, is the Democrats’ best chance of electoral success going forward. With that in mind, if a Biden presidency is to avoid crashing on the rocks of four years in a Republican Senate, the party requires a rapid rethink of their political strategy.

How many more defeats will it take for the Democratic leadership to finally abandon its attempts to pander to the mythical swing Republican voter? How long can establishment politicians submerge the genuine popularity of progressive policy?

If the war on the left continues, the Democrats will continue to gift Republican elections for generations to come.

Freddie Stuart is the producer of the ourVoices podcast at openDemocracy. His recent work covering the US election can be found here.