More Filipino Healthcare Workers Have Died of Covid-19 in the UK Than the Philippines. Why?

Addressing reporters last week, May Parsons’s mouth was obscured by a surgical mask – though you could tell from the way her eyes were creasing behind her protective goggles that she was beaming. The nurse, fresh from administering the UK’s first coronavirus vaccine to 90-year-old Margaret Keenan, said the experience was “all positive for me”.

Her interviewer, Good Morning Britain’s Jonathan Swain, was keen to highlight – as, perhaps, were the Coventry and Warwickshire NHS trust managers who selected Parsons for the role – her contribution not only as a nurse, but as a Filipino nurse. “Piers and Susannah were talking earlier on, paying tribute to all the Filipino nurses that work in the NHS, we’re so dependent and thankful for your contribution,” he said. Seemingly surprised by Swain’s remarks on her national origins – she has lived in the UK for 17 years – Parsons blushed and gave a polite laugh, before quickly finding words for the occasion. “I’m really glad to be telling all the Filipinos in this country and everywhere in the world that we can make a difference,” she effused. “I’m very proud to say to everyone that I’m a Filipino British [woman] today making history.”

‘I was so proud to contribute to stopping the pandemic.’

May Parsons is the nurse to give the first Covid-19 vaccine in the world.

She’s worked at the trust in Coventry for 17 years since she arrived in the UK from the Philippines.

It’s impossible to know what was going through Parsons’s mind as she talked to Swain, whether her feelings were in fact “all positive”. But it is likely that when she spoke of Covid-19’s ‘cost in human lives’, she was aware of the premium paid by Filipino NHS workers like her.

Filipinos had the highest death rate of any ethnic group in the NHS as of May, and according to the Filipino Nurses Association UK, more Filipino healthcare workers have died of coronavirus in the UK than in the Philippines. By October, official reports indicated that nearly 40 Filipino NHS workers had died after contracting Covid-19 – though unofficially that figure is estimated to be far higher.

Cynthia* came to the UK to work as a nurse from the Philippines in late 2019. Cynthia’s journey here was a long and hard one, and included a litany of exams: an English language test, a clinical exam and, since October 2014, a computer-based exam to ensure applicants have the right “knowledge, skills and attitudes” to work as a nurse in the UK. The tests cost thousands of pounds – the average nursing salary in the Philippines is 9,757 pesos or £153 per month – and some must be taken in the country’s capital, often many miles from home.

Cynthia happily endured all this on the assurances of her nursing school classmates, who told her that “greener pastures” awaited her in Britain. She was “so excited”, she tells Novara Media, when she discovered she’d been accepted to work in the NHS, “my dream and goal as a nurse”. A year later and back home, her enthusiasm has evaporated. Speaking over Zoom, our conversation is frequently interrupted – sometimes by shaky wifi, though more often by tears.

Cynthia is from a provincial part of the Philippines and says she chose somewhere similarly rural in the UK because she wanted a quiet life. What she got was quite different. From the start of her employment, colleagues would pick on her: on one occasion, a senior nurse asked her to make coffee for her and a patient, only to mock her willingness to perform such a menial task. At first, Cynthia presumed this was just a way of toughening up newbies. Then she observed something more sinister at work.

The month Cynthia spent in self-isolation compounded her loneliness as a new immigrant. “It was terrifying because I didn’t have anyone around me. I couldn’t see my parents or be with them.” Soon she discovered she was not alone, and in the most terrifying way. “When I watched the news, a lot of Filipino nurses died during that time. Some of them were my friends,” she says, choking on tears, “some were my professors”.

Having never previously suffered from mental ill-health, Cynthia began having panic attacks and slid into depression. 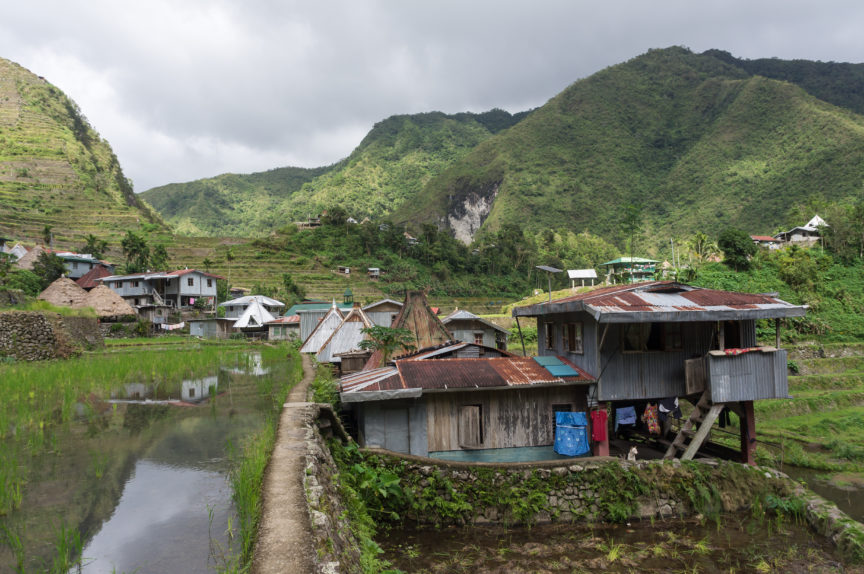 Cynthia returned to her village in the Philippines. (Adobe Stock)

It was also around this time that Cynthia came across the Kanlungan Filipino Consortium. Established in 1994, the organisation fills an important gap in the lives of many Filipino migrants to the UK. Whereas geographical proximity and historical presence has enabled other immigrant groups to develop more extensive support networks, Filipinos, who only began immigrating in significant numbers in the 1980s (there were around 18,000 Filipinos in the UK in 1986; by 2010, around 250,000), and are more dispersed across the UK, often feel adrift. Kanlungan aims to address this with services that range from the practical – delivering groceries during the pandemic, or rights training webinars to healthcare workers – to the more intangibly beneficial – support groups, art classes, counselling.

Kanlungan provided Cynthia with a counsellor in the hopes she would feel supported to continue building her life in the UK – but to no avail. Her months-long ordeal in the NHS had reached such a point that she was fearful of having a breakdown and being sectioned – then confined, alone again, in a psychiatric unit. In September, she booked a one-way ticket to Manila. “It was the toughest decision I’ve ever made. I had to choose between my dream and goals in life, and my health and wellbeing.” She’s spent the months since convalescing, with no immediate plans to return to work.

Filipinos are one of the great overlooked migrant communities in the UK. Between March 2016 and March 2019, 4,000 Filipinos came to work in the NHS, where they comprise the second largest migrant contingent after Indians. In her 2003 book, Empire of Care, Berkeley professor Catherine Ceniza Choy details how this pattern of migration has its roots in early 20th century American imperialism in the Philippines, a pillar of which were new nursing colleges and accompanying study abroad programmes. Nursing programmes in the Philippines remain geared towards overseas employment, and while the US remains the favoured destination for graduates, the UK and Canada are also popular.

Once here, says Francesca Humi, advocacy and campaigns officer at Kanlungan, Filipinos are relatively easy to exploit. This is partly due to the precarity they share with all non-EU (and soon EU) migrants, many of whose visas are directly tied to their employment; Cynthia said this was one of her main deterrents against complaining to her managers. There is also, says Humi, a cultural component to Filipinos’ vulnerability. She explains that one of the many legacies of almost 400 years of Spanish colonialism in the Philippines was the institution of hierarchies, both bureaucratic and religious, that had serious repercussions for worker organising: “There are even some religious groups in the Philippines that actively ban their members from unionising.”

It should be noted, however, that this union-busting was never wholly successful: from the printworkers who walked out of a colonial government press in San Fernando in 1872, to the Delano grape strike of 1965, to the 5,000 Californian nurses, many of them of Filipino, who struck in 2007, Filipino workers have a rich history of organising, both in the Philippines and in the diaspora. Nevertheless, colonial stratification of Filipino society has undoubtedly made it easier for some Filipinos to be exploited in class-bound Britain, and by hierarchical organisations such as the NHS in particular.

Systemic discrimination and the racial bias of coronavirus.

Of course, Filipinos are not alone in facing systemic discrimination in the UK, nor in seeing that discrimination manifested starkly during the pandemic. The racial bias of coronavirus against all people of colour – nationally though particularly in the NHS – became apparent relatively early on in the pandemic. On 22 April, just five weeks into the first national lockdown, the Health Service Journal published an analysis indicating that BAME NHS workers were dying at a disproportionate rate. Among the 35 nurses and midwives who had died by that point, 71% were BAME, despite BAME workers comprising only 20% of the nursing and midwifery workforce. A flurry of activity followed: not a month later, the NHS had published a ‘Risk Reduction Framework for NHS staff at risk of Covid-19 infection,’ explicitly including BAME staff.

A common complaint against the category of “BAME” is its imprecision. In the case of Covid-19, it has obscured the disproportionate effects the pandemic has had on Filipino healthcare workers specifically. Humi stresses that such categorical elisions have real-world effects. Filipinos comprise 2% of NHS England’s workforce, yet 25% of its coronavirus deaths – yet because “BAME” is the default way of accounting for ethnic minorities, the NHS has not been forced to take responsibility for this statistic. “Because we’re not identified as a community, it’s as if we don’t exist,” she says, “we’re invisibilised”.

Beyond amending the census – a years-long and labour-intensive process – the solution to this problem lies in groups such as Kanlungan. As well as offering services directly to the Filipino community, the network lobbies government, produces reports and runs campaigns. The group’s effect has been tangible: Humi notes that a significant number of national media outlets have attended closely to the particular effects that coronavirus has had on Filipinos, in a way they did not previously. This public awakening has come too late for Cynthia, and for those Filipino healthcare workers who tragically died this year of coronavirus, but Humi and her colleagues hope that through their work, others will be more fortunate.

*Not her real name.

An earlier version of this article quoted Francesca Humi saying that “Filipino culture is very hierarchical”. The way the quote was originally presented risked reinforcing racist stereotypes about the submissiveness of Filipinos, or indeed of Asian people in general. We have therefore removed the quote, clarified Humi’s comments, and contextualised them within a history of Filipino labour organising.