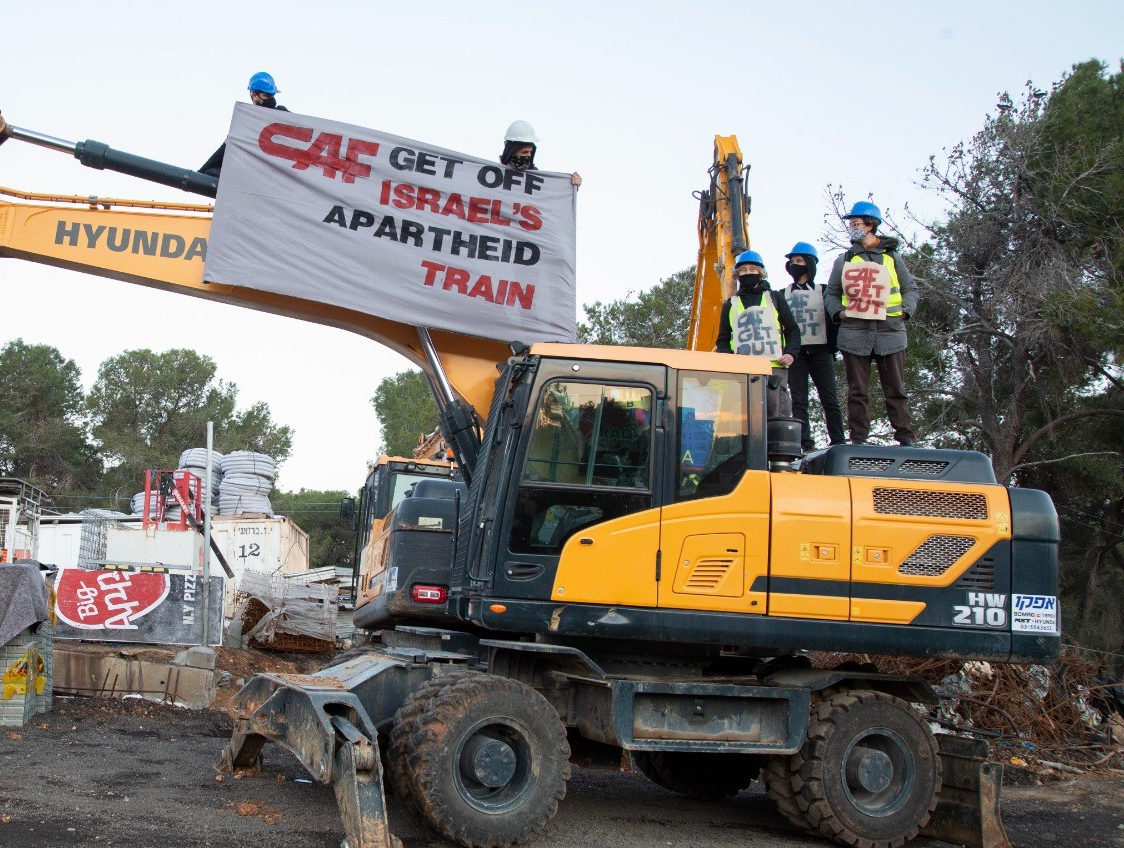 Israel’s leading human rights organization B’Tselem made headlines last month after it issued a report saying what Palestinians have been saying for decades: that Israel maintains not just a regime of military occupation in Gaza and the West Bank, including East Jerusalem, but an apartheid regime over the entire Palestinian people.

In East Jerusalem, where I live, we’ve experienced that apartheid every day since 1967. Israel demolishes our homes and steals our land. Israeli police and soldiers attack and imprison us, trapped in shrinking enclaves by military checkpoints and giant walls. Meanwhile, Israel announces new illegal settlements on our stolen land at a frenzied pace, and the more than 675,000 Israeli settlers who live in them enjoy superior rights to ours.

Defenders of Israel think when they say “every Israeli citizen” people won’t notice the
millions in Israel-occupied territories who aren’t citizens. “It’s not apartheid because we don’t discriminate against the people we give rights to” is an argument that should be laughed at. https://t.co/TEOrzFqfuC

Of course, settlements rely on infrastructure: Israeli walls, checkpoints and roads eat up Palestinian land and entrench apartheid. As the Israeli watchdog Who Profits explains: “For the occupied Palestinian population, these infrastructure development projects are intimately tied to the processes of dispossession and facilitate land grabs. In this way transport projects are a means of annexing land, fragmenting and isolating communities and destroying agrarian livelihoods by separating farmers from their agricultural lands.”

Israel has already built hundreds of kilometres of settlement roads, cutting through the West Bank, including East Jerusalem on which travel by Palestinian vehicles is often restricted or even prohibited. Israel’s apartheid wall, eight meters high in East Jerusalem, cuts through our communities, separating us from our families, agricultural land and workplaces.

My family is from the village of Lifta on the outskirts of Jerusalem. We were ethnically cleansed from there by Zionist militias in 1948, fleeing eastward to Jerusalem. In 1967, Israeli soldiers drove us from our homes once again, in order to expand the Hebrew University campus.

Now we live in the Sheikh Jarrah neighbourhood of East Jerusalem, which Israel is once again cleansing, house by house, of its Palestinian residents, replacing us with settlers. We are hemmed in on all sides by new Israeli settlements and infrastructure projects: the apartheid wall to the east; the Qalandiya checkpoint to the north; Israeli settlements to the south; and the new Jerusalem Light Rail (JLR) to the west.

Completed in 2011, the JLR seizes land from Palestinian towns like Shu’afat in the northern part of East Jerusalem. It also connects illegal Israeli settlements in occupied East Jerusalem to one another and to west Jerusalem, helping settlements thrive and isolating our communities.

In April 2018, Israel announced the tender for bids to extend the JLR network. The planned new Green line will entrench existing violations, slicing through Palestinian towns like Issawiya, already besieged by Israel’s military, and be built on Palestinian land, including the villages of Beit Sfafa and Sharafat. It will connect the fast-growing illegal settlement of Gilo to the rest of the city, and isolate the Palestinian village of Walaja, as well asthe historic Palestinian city of Bethlehem, from neighbouring East Jerusalem.

In August 2019, the Israeli government awarded a $1.8bn contract to two companies to complete the JLR project: Israeli construction company Shapir, and Spanish transport firm Construcciones y Auxiliar de Ferrocarriles (CAF). Under the terms of the contract, CAF and Shapir will build 27km of new track and 53 new stations for the Red Line; build the new Green Line, which is 20.6km long; supply 114 new trams and signalling, energy and communication systems; and operate and maintain both lines for 15 and 25 years respectively.

We know that international corporations sustain Israel’s racist regime of oppression. We also know that excluding them from major contracts can end their complicity with apartheid. Inspired by the global movement that contributed immensely to ending apartheid in South Africa, we in Palestinian civil society have launched a call for peaceful boycotts, divestment and sanctions (BDS) targeting the Israeli government and institutions that abet it in order to pressure them to respect Palestinian rights. We have had significant wins, including on the JLR project: in 2015, Veolia pulled out of the project after a BDS campaign cost the French company billions in international tenders in Europe, the US and Arab countries.

hope you all realize that you don’t know any better than palestinians do, and that your opposition to BDS is less “principled politics” than it is just plainly bigoted dismissal of nonviolent resistance to occupation.

Now groups in Spain, Palestine and across the world are putting pressure on CAF in the hopes of forcing a similar u-turn. Trade unions representing workers in CAF’s factory in Besain, France, as well as two unions in Zaragoza, Spain, have called on CAF to withdraw from the project; 70 Basque civil society groups have also demanded CAF pull out. 18 human rights groups in Spain have urged the minister of transport exclude CAF from public tenders, while eight trade unions in Norway have called on public bodies to do the same.

Meanwhile in the occupied West Bank, a group of Israeli activists protested against the JLR, and CAF’s involvement in it, as construction began in the settlement of Gilo.

31 Palestinian and European human rights organisations and trade unions asked the UN to add CAF to its database of companies involved in Israel’s illegal settlement enterprise, joining its JLR partner Shapir, which is already in the database.

In the UK, the need for a boycott is particularly urgent. For while helping to entrench the system of Israeli apartheid, CAF is also bidding to support the construction of Britain’s high-speed railway project HS2. CAF hopes to win the tender, estimated to be worth £2.75bn, to design, build and maintain at least 54 high-speed trains.

Opposition is already mounting. In the UK, 4,000 human rights advocates have demanded the government exclude CAF from HS2. In a new legal brief, UK and European legal experts concluded that UK authorities have the right to do so, due to CAF’s involvement in breaches of international law.

With the decision on the HS2 tender expected between April and June, now is the time for action. We must demand that the UK government exclude CAF – and any other company profiting from grave human rights violations, in Palestine or anywhere – from HS2

The growing global consensus that Israel is an apartheid regime must be matched with global action. Corporations like CAF that enable apartheid must be denied lucrative public contracts until they end their complicity with apartheid – until my people, in Jerusalem and throughout our homeland, finally achieve freedom, justice and real peace.

Zakaria Odeh is the coordinator of the Civic Coalition for Palestinian Rights in Jerusalem.

Opinion: To the Free Speech Warriors of the Right, Only Some Speech Matters

We shouldn’t be confused by the Tories championing free speech one moment, suppressing it the next. It’s always been perfectly clear whose speech matters to them, argues Barnaby Raine.

Analysis: Is Israel Above International Law?

As Israel prepares to annex the West Bank, academic and author Haim Bresheeth asks why the country seems free to carry out any illegal action it wishes, with no sanction or retribution for breaking international law.

Opinion: We Have Let Israel Dispossess, Displace and Ethnically Cleanse Palestinians for Decades

As Israel intensifies its campaign against Palestine by preparing to annex the West Bank, we must remember that its actions have not come out of nowhere, writes Malia Bouattia. Instead, they are the outcome of decades of inaction and complicity by foreign governments and companies.