Paul Williams said the Gulf state was ‘modern and progressive’ after going on a trip paid for by the regime.

Imagine if, at any point between 2015 and 2019, a Labour MP aligned with Jeremy Corbyn had gone on a regime-funded trip to Syria, and come back parroting the talking points of the Assad dictatorship. Moral horror across Westminster and Fleet Street would have been unconfined, and rightly so. Imagine if Corbyn had then batted away the criticism and stuck by his ally. The scandal would have gone into the stratosphere. We would still be talking about it today.

Now consider the case of Paul Williams, formerly the MP for Stockton South and currently Labour’s candidate in the forthcoming Hartlepool by-election. In April 2018, Williams went on a regime-funded trip to Saudi Arabia and came back parroting talking points in coordination with the Saudi embassy. But it would be quite wrong to draw an equivalence between this and the Syrian scenario outlined above. What Williams did is even worse.

Labour Hartlepool by-election candidate said Saudi Arabia was ‘modern and progressive’ after going on £8,700 trip paid for by regime https://t.co/SWkbuQxfpb

Unlike with Syria, Britain has a closely supportive relationship with Saudi Arabia. It is a material enabler of Saudi authoritarianism, and with regards to the Saudi war in Yemen, it is an accessory to mass murder. Any support that a British politician gives to that relationship renders them politically complicit in its considerable human cost.

Let’s remind ourselves of what those costs entail. Since it intervened in the Yemeni civil war in 2015, Saudi Arabia has carried out widespread and systematic attacks on civilians, bombing hospitals, schools, weddings and funerals, and killing thousands of defenceless people. It has implemented a blockade which has strangled Yemen’s economy, and which is the leading cause of an estimated 85,000 infants dying of starvation or preventable disease. British and American support has made this possible. The Royal Saudi Air Force is comprised of military jets which could not remain operational without ongoing supplies and support from the UK and US.

Campaigners, NGOs and academic experts have worked hard over the past six years to draw these realities to the public’s attention. Our aim has been to exert enough pressure on Washington and London to pull the plug on Riyadh’s war, and thus save Yemeni lives. During his 2018 trip to Saudi Arabia – covered by a £8,762 donation from the regime – Williams saw fit to undermine and cut across those efforts.

In a Facebook post employing a contrived tone of objectivity and open-mindedness, Williams offered an account of the war framed by familiar, discredited UK-Saudi arguments. He presented the Saudi bombing as defensive, despite the fact that rockets from Yemeni ‘Houthi’ rebels were only fired across the border after the 2015 Saudi intervention began. He portrayed British support as a practical solution to Saudi atrocities, rather than an effective enabler of them. He downplayed Britain’s culpability for the human costs of the war to the point of whitewashing it. And he wasn’t done there. 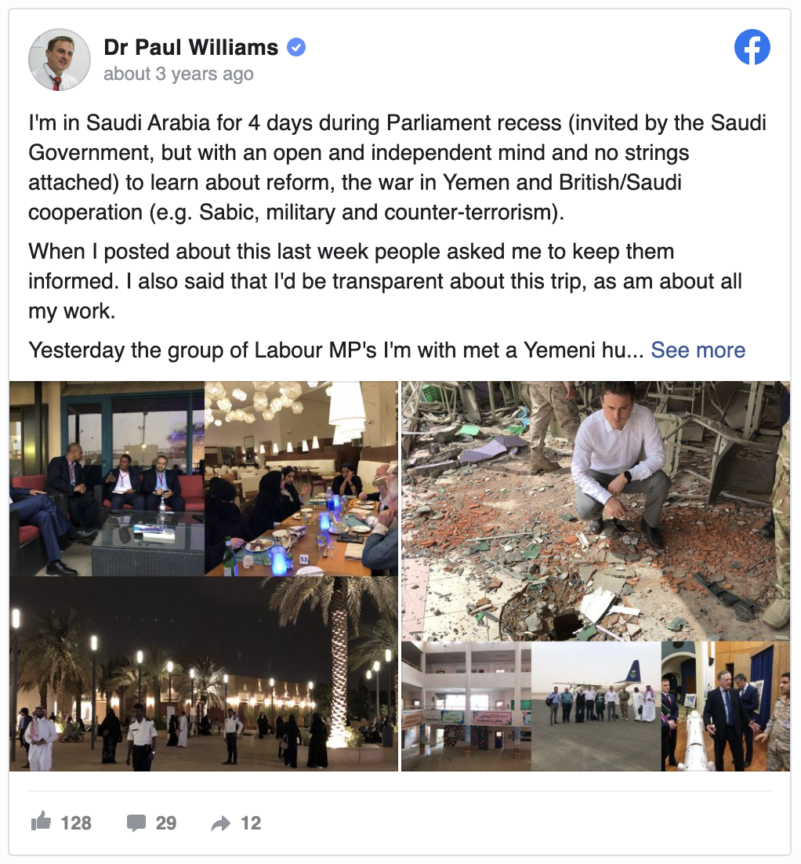 Under the rule of Crown Prince Mohammed Bin Salman, the Saudi regime has made a concerted effort to shore up its position for the long term. Key to this is the reinforcement of its relationship with the Western powers that have propped the kingdom up since it was established in the early 20th century. Hence the PR message that has been relentlessly hammered home by the regime and its supporters since Bin Salman came to power: Saudi Arabia is on a path of progressive reform, led by the young Crown Prince, so stick with us, and keep the arms and investment coming. It’s a classic corporate rebranding operation, formulated with the advice of Western consultancy firms.

Williams took up the line with the message discipline of a true politician. On his return from the kingdom he tweeted: “Asked by Yousef, from the Saudi Embassy in UK, whether my perceptions of Saudi Arabia have changed after this trip, I said that my previous notions have been blown out of the water. I’ve seen a modern, progressive Saudi Arabia that has totally changed my view of this country”. Throughout his trip, Williams had presented himself as a man on a fact-finding mission. In terms of both the facts he happened to find and the way in which he presented them, the regime certainly got its money’s worth.

But the picture painted by Williams of a kingdom where progressives have their place under the benign leadership of a reforming Crown Prince is one that is straightforwardly false. If Williams had any serious interest in the facts, he could have learned this by taking the obvious step of consulting the relevant NGOs and academic experts, rather than embarking on a regime-funded junket.

Asked by Yousef, from the Saudi Embassy in UK, whether my perceptions of Saudi Arabia have changed after this trip, I said that my previous notions have been blown out of the water. I’ve seen a modern, progressive Saudi Arabia that has totally changed my view of this country pic.twitter.com/Hn59tuobXf

They would have told him that economic changes and limited social liberalisations are being accompanied by a crackdown on political dissent that is vicious even by the kingdom’s own standards. The crackdown deploys the kingdom’s counterterrorism apparatus to target peaceful dissidents, human rights defenders and pro-reform advocates. Williams was right to say that there are a great many progressives to be found in Saudi Arabia. But he would have struggled to meet them given how many of them languish in prison.

Williams wrote on his trip: “I’ve been astounded to […] hear modern, progressive women speak without restriction”. And yet to the surprise of exactly no informed observer, the very next month saw a targeted regime assault on the independent Saudi women’s rights movement. Here it is worth quoting Human Rights Watch at length:

“…[A]uthorities launched arrests of prominent women’s rights activists and accused several of them of grave crimes like treason that appear to be directly related to their activism. By November [2018] at least nine women remain detained without charge, though some anticipated charges could carry prison terms of up to 20 years […] Human rights organizations reported in November that Saudi interrogators tortured at least four of the women, including by administering electric shocks, whipping the women on their thighs, and forcible hugging and kissing […] Authorities accused several of those detained of serious crimes, including ‘suspicious contact with foreign parties’ under dubious legal pretences. Government-aligned media outlets then carried out an alarming campaign against them, publishing their photos branded with the word ‘traitor’.”

Of course, Labour support for the Saudi kingdom is not a new phenomenon, let alone one restricted to Williams. It was Harold Wilson that signed off on the first landmark UK-Saudi arms deal, for Lightning F.53 fighter jets. The Eurofighter Typhoons that have been pulverising Yemen for the past six years were sold in a deal brokered by Tony Blair and signed off by Gordon Brown. The current stance is to oppose UK support for the war in Yemen, but that appears to be a position Keir Starmer had to be pressured into during last year’s party leadership contest.

Starmer seems to have been forced into a significant shift here. When his 10 policy pledges were released a fortnight ago he only committed to “review” arms sales, not “immediately suspend” those to Saudi, as per the 2019 manifesto https://t.co/WiqH7Uqp42

When questioned recently about Williams’ tweet quoted above, Starmer told The Times: “Paul shouldn’t have said that […] But what matters […] is that he’s a frontline doctor working in a Covid clinic in Hartlepool […] That’s the measure of the man”.

And surely what gives us the measure of Labour as a supposedly progressive political party is the fact that its decision to run Williams as a parliamentary candidate is both shocking and, at the same time, not even slightly surprising.