Centralisation and solidarity are not the same thing.

On the day before the Scottish independence referendum in 2014, a friend of mine was out campaigning.

He tells the story of how he met an old friend who stopped to talk about the referendum. She asked him what independence would fix. His answer was that the Westminster system was hopelessly outdated, and impervious to change. “I don’t see that,” came her reply. Years later, my friend met the same person just after Boris Johnson had unlawfully prorogued parliament. She remembered their earlier conversation and asked him: “How could you see that everything would go wrong?”

For those of us who campaigned for a radical Scottish independence, we saw the opportunity to shake Westminster from centuries of privilege-drenched complacency. From failed promises of reforming the House of Lords and the electoral system to the ongoing overinvestment in London and the south-east driven by the Treasury, there is a lot that needs to change. But by 2014, Labour’s 13 years in power had delivered little change, and the prospect of another Conservative government meant that any progress would be on hold for another five years.

For those of us who had tried and tried again to shift the Westminster system, independence represented an alternative road. That road was never meant to divide us from progressives elsewhere. Indeed, part of the reason why the Labour party has been so unsuccessful at reforming the British state is that it has mistaken centralisation for solidarity for too long. Nothing about Scottish independence would make it less likely that progressives in Scotland would work for change with those in the remaining UK.

We wanted – and want – to build a Scotland on a very different set of principles to those deployed by the UK Treasury. The 2014 campaign moved ideas like a universal basic income from the margins of debate to the centre. Unlike the Brexit referendum, it looked outwards rather than seeking a return to some imagined past. Moreover, the referendum spun off a variety of social movements that have campaigned for everything from tenants’ rights – the superb Living Rent union – to fossil fuel divestment. Immediately after the referendum, Women for Independence won a campaign to prevent the building of a new women’s prison.

For me, politics is about movements that can bring about radical change. The independence movement was exactly that. Of course we need to renew our movements, and there is much to be said about how to do that in Scotland. But far from being a distraction from issues of social and environmental justice, the independence referendum created a popular fomentation that prompted firm action, such as the fracking ban. As such, constitutional politics in Scotland offered a rupture with the dead hand of neoliberal consensus. At last, questions of power, ownership and justice came to the fore, replacing the managerial politics of the pre-2014 era.

Against this history, the 2021 Scottish election marked the further alignment of two blocs in Scottish politics. The dividing line is the constitution; those on the independence side are coalescing around progressive ideas, while those on the unionist side tend toward more conservative ideas. The era of Jeremy Corbyn’s leadership of the Labour party brought some disruption to that pattern, and there are many in Labour, including my fellow North East Scotland MSP Mercedes Villalba, who are definitely part of the solution. But the removal of a leftwing Scottish Labour leader, Richard Leonard, at the behest of big donors, as well as Keir Starmer’s resolute opposition to the Scottish people having the final say in their own destiny, suggests Labour has decided that in Scotland it is against progressive change.

For the environment, this creates opportunities. Historically, the Scottish National party’s rise was on the back of the discovery of North Sea oil. The incredibly resonant ‘It’s Scotland’s Oil’ campaign was a major part of the party’s breakthrough Westminster success in 1974. Now there lies an opportunity in weaning the SNP off oil and onto a Green New Deal, which was the central plank of the Scottish Greens’ 2021 election campaign. 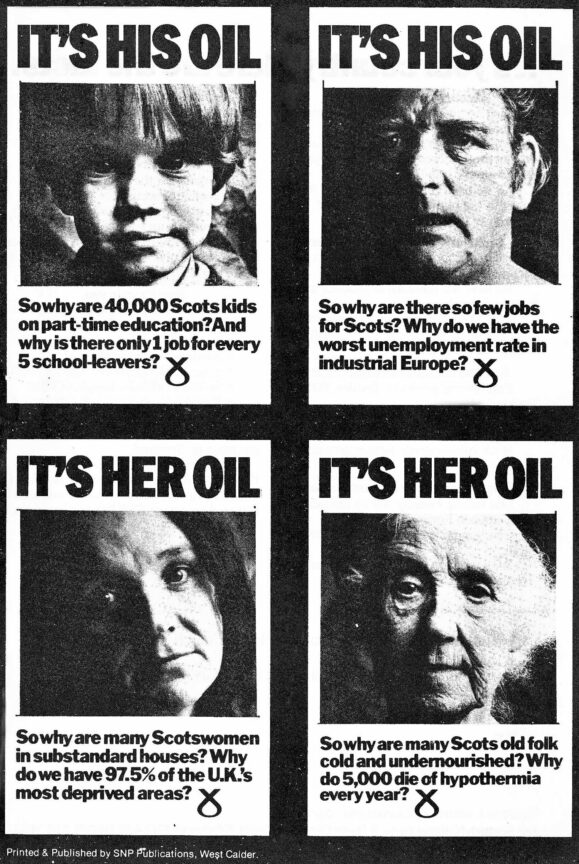 A worker-led just transition that replaces jobs in extractive fossil fuel industries with high quality jobs in renewables and clean energy would be a template for energy transition around the world, and a firm basis for Scotland’s participation as a full nation in international affairs. Just as the SNP were once leading figures in the early days of the Campaign for Nuclear Disarmament and other groups opposing Atlanticism, they now wish to be leading figures in solving the climate emergency. That aligns with Greens’ desire to deliver climate justice by leading a radical reduction in emissions. Scotland could go from being the birthplace of the carbon economy to leading the transition to a new type of economy.

A blueprint for Britain.

The social movement for independence brought a new radicalism to the SNP and its institutional tendency. Where currently our collective energies are being directed within the UK at last-ditch efforts to stop the approval of new oil extraction or the export of weapons to Yemen, in an independent Scotland we could instead spend this energy on using the full powers of the state to bring about a just energy transition.

One vital thing this could offer progressives in the remaining UK is a blueprint. For too long British political elites have been resistant to learning from other countries. But having a successful transition that places workers’ rights at the heart of a shift from fossil fuels right on England’s border would pose an alternative to the Tory plan for deregulation of workers’ rights, environmental standards and consumer protections. Breaking the spell of British exceptionalism may be a better path to change than continually trying to reform the unreformable.

It’s become clear during the Covid crisis that the UK government is both unwilling and incapable of dealing with serious issues. The money wasted on a useless track and trace system is close to the total budget for the Scottish Government. This is not incompetence; it is the Tories’ desire to focus on enriching their friends and donors. The same is reflected in their approach to the climate crisis: talking about leading the world while approving new fossil fuel extraction.

Given the powers of an independent nation, and a movement for independence that is committed to a just transition to deal with climate change, an exciting opportunity arises. If we can disentangle solidarity from centralisation, then having previously led the world in fossil fuel extraction, we can instead create a crucible for real action to tackle climate breakdown and a blueprint for politics in the rest of these islands and the rest of the world.

Breaking Britain is part of Novara Media’s Decade Project, an inquiry into the defining issues of the 2020s. The Decade Project is generously supported by the Rosa Luxemburg Foundation (London Office).

When we talk about breaking up Britain, we can’t just talk about the British state, argues Adam Ramsay. We also need to understand what gives the state its social license to operate: that is, British nationalism.

Analysis: The SNP Won’t Deliver a Radical Independence for Scotland

While a second Scottish independence referendum seems inevitable, it won’t be a re-run of the first, writes Jonathon Shafi. Thanks largely to the growing dominance of the SNP within the pro-independence movement, the stakes are higher than ever.

The UK has been vigorously shaken before, and yet still managed to hold its shape. Rory Scothorne explores how previous challenges to the union came about and were resolved to shed light on how a break-up might (or might not) occur today.