Germany’s SPD Is About to Take Power. Can It Stick to Leftwing Principles?

The left may be sidelined in coalition talks.

After a narrow victory in Germany’s federal elections at the end of September, the Social Democratic Party (SPD) is now the clear favourite to lead the next German coalition government. With a left-leaning manifesto and centrist candidate to replace Angela Merkel as chancellor, the party’s victory provides a useful case study for all those concerned with left electoral strategy in Europe.

As the world’s oldest social democratic party, the SPD is no stranger to internal conflict: Rosa Luxemburg famously left the party over its support for the first world war. Today, however, the party is united like never before, a marked contrast to the divides tearing through the UK’s Labour party. But will the SPD’s newly found unity survive coalition negotiations with parties to the right of German politics? And when the deals are signed, will the left be out in the cold?

#Germany
“Olaf Scholz has moved closer to succeeding Angela Merkel as chancellor after his Social Democrats agreed with the Greens & liberal Free Democrats on moving towards formal negotiations to create a three-party coalition”#GermanElection2021 #macrohttps://t.co/CTsZXWEGJP

Like our Labour party here in the UK, those on the right of the SPD have tended to control the party leadership and machinery. Also like our Labour, a grassroots rebellion in the 2010s facilitated by the party’s first ever one-member-one-vote leadership election resulted in a takeover by the party’s left. In 2019, Saskia Esken and Norbert Walter-Borjans were elected in a shock result for the German establishment.

This, however, is where the similarities end. While Labour’s factions have been at war since 2015, the SPD’s factions are working together. “Obviously there was rivalry,” explains Philippa Sigl-Glöckner, an economist close to Walter-Borjans. “But it was a clean competition, [and] since then [leaders of different factions] have been talking a lot.” Sigl-Glöckner views these conversations positively, arguing that consensus between left and right was vital in leftwing policies – such as a wealth tax, unified public health care and a higher minimum wage – finding their way into the SPD’s recent election manifesto. 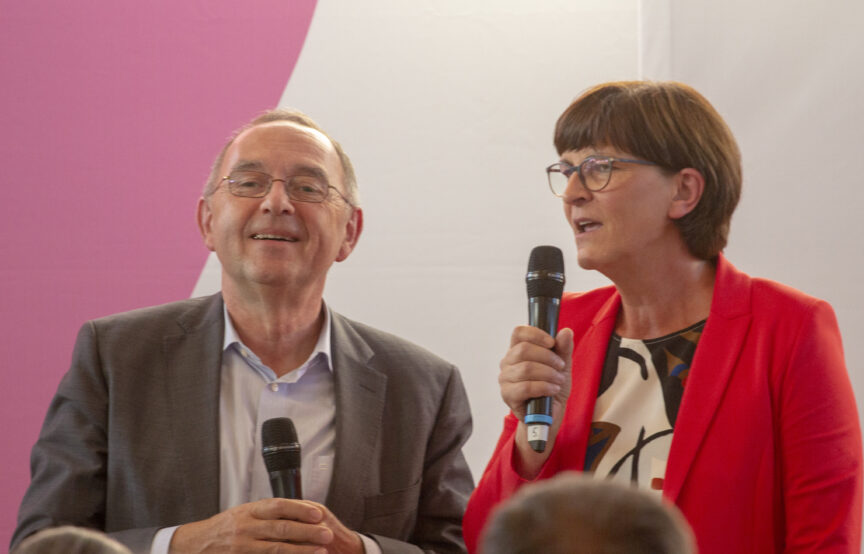 Some leftwing activists, however, argue that the leadership’s collaborative approach is an unnecessary triangulation, weakening a party base now betrayed by unkept promises of a leftwing renewal. Drafts of the coalition negotiation have caused disappointment, promising no higher taxes on the wealthy and abandoning unified public healthcare; a €12 an hour minimum wage, though, has been retained.

The SPD’s record and the youth wing.

Since 2013, the SPD has been in a Grand Coalition (known as the Große Koalition or GroKo in German) with the Christian Democratic Union of Germany (CDU), Merkel’s party. The desire to leave this coalition was vital in uniting the SPD’s left-leaning members, and, crucially, also comprised part of Esken and Walter-Borjans’ successful election campaign.

Many see the Jusos (Young Socialists), the SPD’s youth wing and an institutional stronghold of the party’s left, as instrumental to the 2019 leadership election victory. A quarter of the recently-elected SPD parliamentary group are members of the Jusos.

Jusos organisers, though, have been particularly disillusioned by Esken and Walter-Borjans’ direction following their victory. Soon after the election, talk of rapidly exiting the GroKo vanished. For Franziska Drohsel, the leader of the Jusos from 2007 to 2010, staying in the Grand Coalition was a tough pill to swallow. She blames the pair’s inexperience: “I think they had a hard time because they didn’t know many people in Berlin and let themselves get intimidated [into staying in the coalition].”

Staying in government in 2019 may have been understandable. Leaving the coalition could have triggered new elections in which the SPD stood to fare poorly. But what happened next stretched the tolerance of many on the left.

Already, Esken and Walter-Borjans’ move to remain in coalition with the CDU meant voting for regressive laws like increased surveillance powers for the federal police and denying trans people the right to legally self-identify. On top of that, the pair nominated arch-centrist Olaf Scholz as the SPD’s candidate for chancellor in a backroom deal sealed in August 2020. Scholz, indeed, was the very neoliberal opponent they had defeated in the 2019 SPD leadership election.

The duo claimed they had no choice: faced with poor personal polling and strong media opposition to their leadership, it was in everyone’s best interest to work with, rather than against, the party establishment. Scholz, who as Merkel’s finance minister is an experienced politician and popular national figure, is widely credited with the party’s election success this year.

Grassroots organiser Steve Hudson, however, argued the decision was a betrayal of all the party should stand for, and resigned his membership immediately. “With Olaf Scholz as candidate for chancellor, the hope that the SPD is saveable through grassroots democracy dies,” he wrote in his resignation letter, describing Scholz as “the most prominent representative of the failed neoliberal course”.

Esken and Walter-Borjans aren’t the only leftists to see their radicalism dampened following ascent to the SPD’s upper echelons. Kevin Kühnert, one-time leader of Jusos, was chosen as a deputy leader following another backroom deal in 2019. Ensconced in power, he later backtracked on his earlier proposals for BMW to be put under worker ownership as a utopian scenario.

Just before September’s election, Kühnert angered many leftists by saying he would vote against bringing big property companies into public ownership in Berlin’s referendum, arguing that the “question on the ballot was badly formulated.” The proposal passed with 56% of the vote.

Even so, Kühnert draws the line at another coalition with the CDU, and promises to resign as deputy leader in the event that it happens. That said, a ‘traffic light’ coalition of the SPD (red), Greens and free-market Free Democratic party (FDP) (yellow) is the most likely formation for Germany’s next government. This would be Germany’s first ever three-party coalition at a federal level.

On Sunday, Germans will vote in a federal election. Polls indicate that the centre-left SPD will lead the government for the first time since 2005.

The nature of the governing coalition will be decided after the election, but Germany looks set for a shift to the centre-left. pic.twitter.com/vcMGFkJaH2

Despite the challenges and concessions the party’s left would have to make in such a coalition, Sigl-Glöckner argues that the SPD can achieve some concrete victories in doing so. The SPD leaders will have an important place in coalition negotiations: the only people who sign the formal coalition agreement are the party leaders and the general secretary. In practice, this gives the left considerable negotiating power.

But whether Esken and Walter-Borjans can use this to hold the SPD to its manifesto pledges remains to be seen. They could still end up defecting to the centre and folding on promises in order to get ministerial positions. Martin Schulz, who ran as the SPD’s candidate for chancellor on a platform of leaving the GroKo in 2017, did exactly this after the election. The preliminary draft of the coalition negotiations, with most progressive policies jettisoned, has only compounded these fears.

This new juncture will test whether the SPD’s left can stick to its principles in a coalition with centrist and right-leaning parties, and whether having the leader’s office is enough to change a party. It wasn’t sufficient for UK Labour. We have already seen the SPD’s leaders and left-figureheads like Kühnert tack right in the name of preventing electoral damage to the party.

The SPD could end up repeating its mistakes from its recent run in the chancellery: further corporate-friendly reform of the economy and a refusal to break free from neoliberal dogma on tax and state spending. If it follows this path again, those working through social democratic parties on the rest of the continent should take note.

James Jackson is a multimedia journalist, translator, and writer based in Berlin.

James Butler is joined by Dana Mills, author of a new critical biography of Rosa Luxemburg, to explore Red Rosa's life, thought and many legacies.

Long Read: For the SPD to Learn From Labour, It Has to Grasp What Kind of World We’re In

Internal divisions over the prospect of another grand coalition with the Christian Democrats, and now the resignation of leader Martin Schulz, are tearing the German Social Democrats apart. Can they learn from Labour's rejuvenation?

On #NovaraFM, Mark Bergfeld joins James Butler to discuss German politics, from #NoGroKo movement against a new grand coalition, the Left Party, the rise of the far right and German social movements.