Sorry, Rachel - you're in the minority on this one.

The overwhelming takeaway from this year’s Labour party conference was one simple sentence: “Now is not the moment”. This phrase was uttered by shadow chancellor Rachel Reeves as she poured cold water on her own members’ demands for a publicly-run energy network. Pledging to take a “pragmatic” approach, Reeves refused to back a policy that the vast majority of Labour members, Labour voters and Conservative voters support.

Meanwhile, as Reeves was on TV rejecting the decisions of her own party conference, energy bills were rising for millions of people, temperatures were dropping, cars were backed up for miles queuing up for petrol stations – and yet energy companies were enjoying gigantic profits. It’s difficult to picture somebody more out of touch with the “pragmatic” realities of everyday life.

Yet Reeves is hardly alone: neither major party will countenance the idea of a publicly-run energy network. The Conservatives were totally flabbergasted by the fuel crisis, and didn’t come up with any ideas to fix it other than issuing temporary visas that virtually nobody used, pleading with ex-drivers to come back to work and bringing in the army – which hardly speaks to the strength of our energy system. Meanwhile, Labour’s leadership has joined Reeves in ruling out public ownership. But whatever their reasons, it’s difficult to think of a better moment for nationalising our crumbling energy network.

Before delving into the problems facing our energy network, we should define what we mean by ‘public ownership’. There are different interpretations of the concept; the ‘We Own It’ campaign advocates for government ownership of the national grid, combined with locally-run public energy companies. Labour’s 2019 manifesto, meanwhile, pledged to take control of the supply arms of the ‘big six’ energy companies and to create new public agencies to distribute energy.

The exact mechanism for public ownership, however, is not as important as the basic principle behind it: namely, that the government should distribute energy on the basis of public need and not private profit. Whether local authorities or central government are in charge, the proposal is that our energy system should be controlled by democratically-elected officials.

So why is it that so many campaigners are calling for the public ownership of energy? It is, in part, due to the financial squeeze currently facing consumers. Over the past few years, the energy price cap (as set by regulator Ofgem) has risen by jaw-dropping amounts. From an annual limit of around £1,000 back in March, the cap on energy prices will rise to nearly £1,600 by this time next year. This is the highest figure since Ofgem began setting a price cap in 2019. 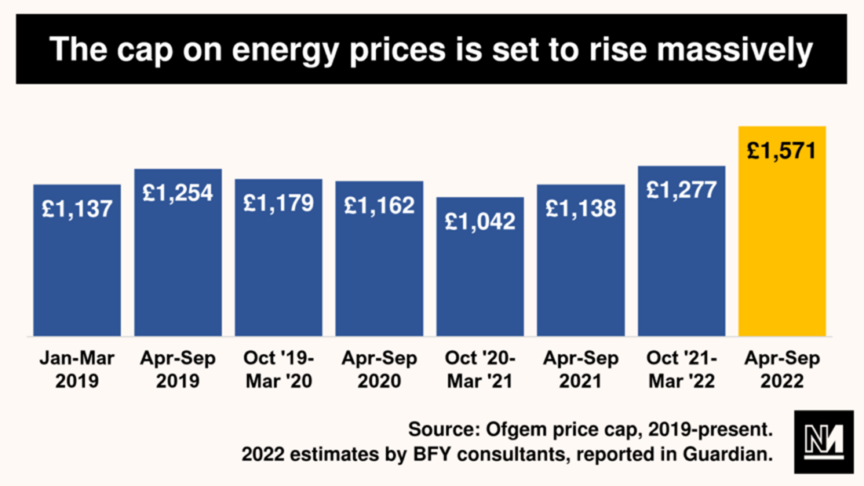 Energy companies such as Shell argue that prices have to rise because gas reserves are low and usage is high. However, it is worth pointing out that the big energy companies still took home eye-watering profits in 2021: British Gas, for instance, saw its profits more than double to £172m in the first half of this year. Under our privatised energy system, these gigantic profits go directly into the pockets of shareholders, whilst energy users see their bills go up by huge margins.

But supporters of public ownership have also pointed out that the private free market is failing providers as well as consumers. Fourteen energy companies have gone bust since 1 August, with over 1.7 million consumers left without a supplier. If the government has to contemplate bailing out energy firms, then the free market clearly isn’t working.

What’s more, this is probably the worst possible time for consumers to be left without energy suppliers or to face prohibitively expensive prices. The Met Office is projecting that the UK will face very cold temperatures over the coming weeks, with snow expected. Right at the very moment when Brits will rely on their central heating to stave off the freezing weather, they face sky-high costs. Those on limited incomes may be left unable to heat their homes, which will likely have disastrous consequences: in 2019, a shocking 8,500 people died specifically due to cold homes.

So how might public ownership solve these problems? In the first instance, countries with nationalised energy have already demonstrated their ability to keep bills down: European countries where the government controls energy, like Greece and the Netherlands, have lower electricity costs than the UK. At the same time, countries with nationalised energy networks have been able to take action to alleviate rising prices. In Italy, the national government has invested €3.5bn euros into an energy subsidy; in Greece, 70% of households received an energy subsidy; and in Spain, the government has cut energy prices by 22%. 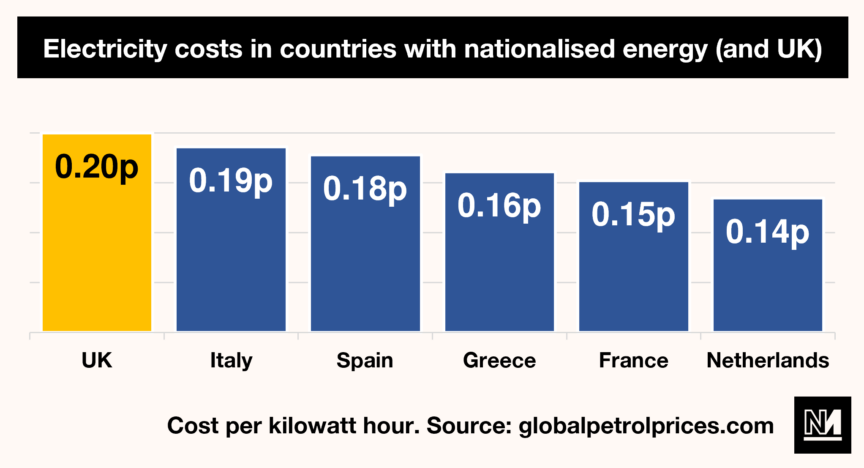 Notably, only Spain’s government is in any way centre-left; Greece is governed by the rightwing New Democracy party, whilst Italy is led by a centrist technocrat. Yet because these countries have energy networks that are publicly owned, governments of all political ideologies have been able to respond to public pressure.

At the same time, whilst nationalisation would be a big political decision, there would be very little political cost to backing public ownership of energy. Polling shows that the public overwhelmingly support the idea, across all political parties. There’s certainly no worries about losing Labour votes over the topic – over 70% of Labour voters back public ownership. 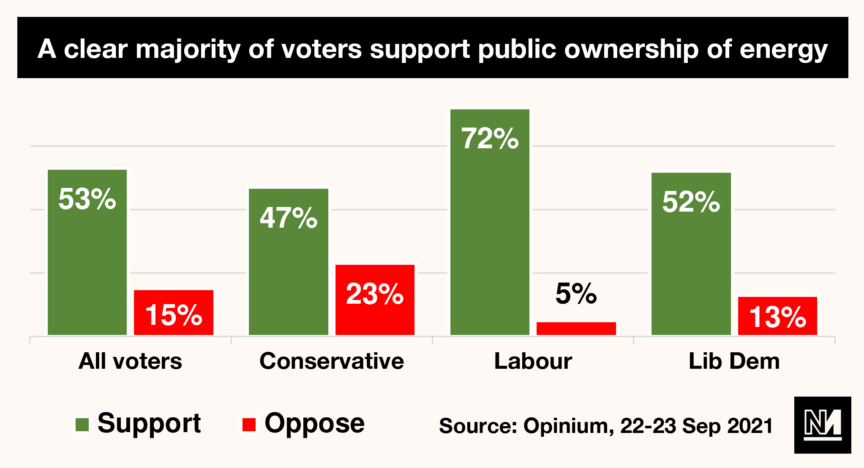 In short: public ownership will allow the UK government to bring down energy bills, save lives, and keep our homes warm. Not only that, but it’s extraordinarily popular amongst voters of all parties – including Tory voters. Contrary to what Rachel Reeves has argued, now is exactly the right moment to take control of our energy network.