The Latin American Left is Ready for 2022

Latin America, the 21st century’s leading region for progressive victories, is in the midst of a leftist resurgence. A new “pink tide” is commencing, with the left holding office in a number of countries and challenging for power in upcoming presidential elections. Kicking off a collection of articles on Latin America’s left, we present an overview of the continent’s war between progressive and conservative forces as flashpoints loom from Chile to Brazil.

The rise and fall of the first pink tide.

The original pink tide of leftist electoral victories began in the early 2000s, reaching a climax between 2006 and 2007. Evo Morales assumed the presidency in Bolivia in January 2006, Hugo Chávez was re-elected in Venezuela in December 2006, and in January 2007 Rafael Correa took office in Ecuador. All three won landslide election victories, joining President Luiz Inácio Lula da Silva’s Brazilian Workers’ Party as harbingers of a new era for Latin America. 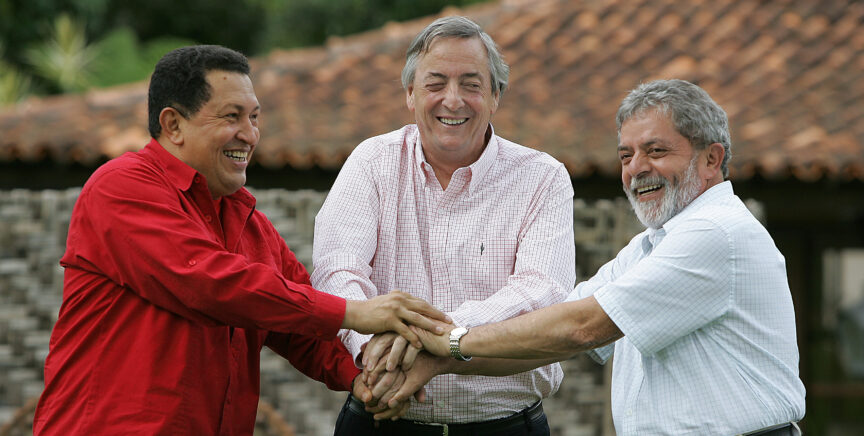 There was hope on the left in Latin America and beyond that the Washington Consensus would be replaced by a new Caracas Consensus. I lived in Venezuela between 2005 and 2007, Chavismo’s highpoint, and the country’s revolutionary fervour was palpable.

The regional right fought back relentlessly against these gains, backed by its historic sponsor: the US government. The US strategised to weaken and overthrow these new left-wing governments. Preventing them from consolidating the new mechanisms for Latin American unity and independence such as the Bolivarian Alliance for the Peoples of Our America (ALBA), set up in 2004, was a particular focus.

By the end of 2019, these efforts had paid off. A 2009 coup and outright electoral fraud in Honduras, the 2016 removal of the Workers’ Party in Brazil, the use of lawfare – the weaponisation of legal tools for political goals – in Ecuador and, finally, a 2019 coup against Morales in Bolivia, all dealt serious blows to the Latin American left. The right was on the offensive, and Trump’s White House ramped up its pursuit of regime change in left-led Venezuela, Nicaragua and Cuba, a newly designated “troika of tyranny”.

As 2021 draws to a close, however, the left appears to be turning the tide once more. An unexpected victory for Pedro Castillo in Peru’s presidential election in June has crystallised mainstream narratives – and fears – of a leftist resurgence in the region: the pink tide 2.0.

Beating the right: Bolivia and Chile.

Recent events in Bolivia demonstrate that the establishment right can be defeated in Latin America. The US and UK-backed coup that overthrew President Morales in November 2019 was rolled back in less than a year. Key to this turnaround were relentless grassroots mobilisations, heroic acts of resistance in the face of massacres and gross human rights violations by the far-right Jeanine Añez regime that replaced Morales.

Luis Arce, a key minister for most of Morales’s presidency, stormed to victory in elections forced upon the regime and assumed the presidency in November 2020. In a recent interview I carried out with President Arce he highlighted the importance of progressive regional unity in light of the cross-continental collaboration of the Latin American right. Bolsonaro’s Brazil, for example, backed the 2019 coup in Bolivia. When I asked about the US government’s role in Latin America, he answered: “It is clear to us that South America, Latin America has to stop being the backyard of the United States.” 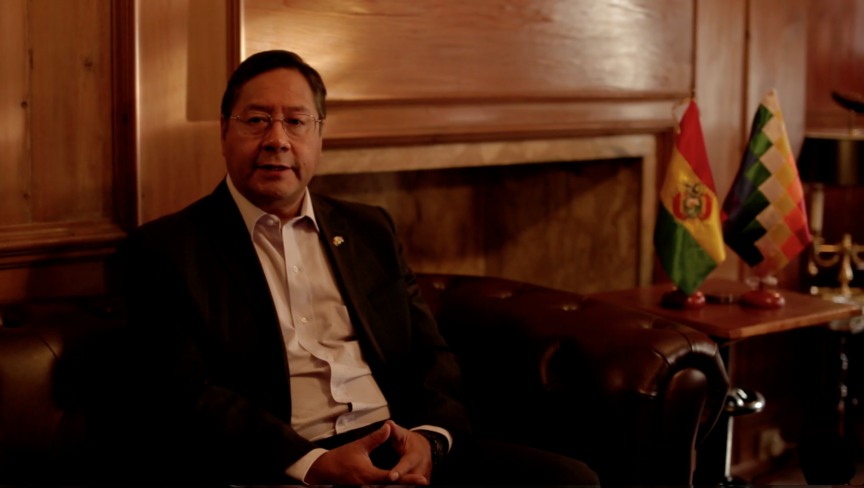 In Chile, defeating the right and the violent imposition of neoliberalism is taking much longer. Neoliberalism was installed in the country from 1973 through the state terrorism of the Washington- and London-backed Pinochet dictatorship.

Despite the formal return of democracy in 1990 the economic model went untouched, regardless of the presence of centre-left governments. Things changed in late 2019, when massive public protests over economic inequality engulfed Chile. These were met with brutal repression by the right-wing Piñera government, which shared the Colombian state’s tactic of blinding protestors. 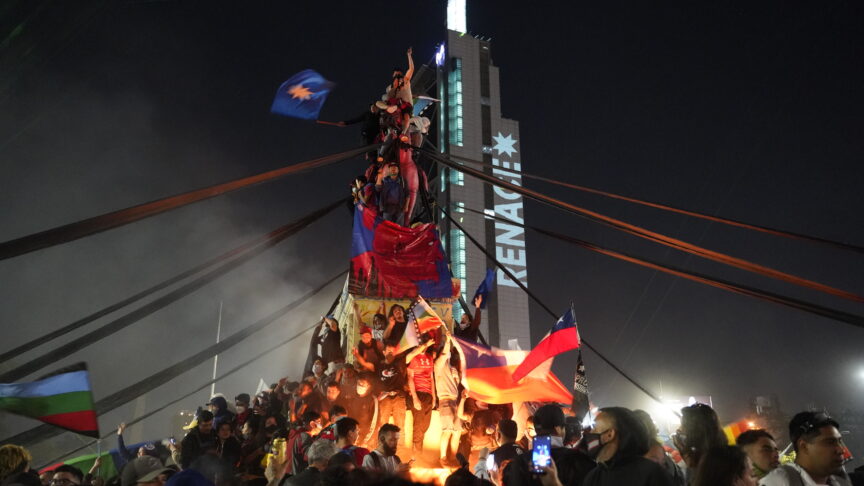 In October 2020, Chileans overwhelmingly voted in favour of a new people’s constitution to replace the illegitimate one imposed under Pinochet, dealing a shock blow to the Chilean establishment. “Neoliberalism was born in Chile and it will die in Chile!” has been a rallying cry on the streets.

The main left candidate, Gabriel Boric, made it through the first round of the presidential election last Sunday, coming just over 2% behind the far-right candidate Jose Antonio Kast, son of a German Nazi army officer and open admirer of Pinochet. The 2nd round run-off is set for 19 December. While this result is undoubtedly a setback, Chile is undergoing a crucial process to rewrite its constitution with the balance of forces within the constitutional assembly favouring progressive forces.

Whatever the final result of the presidential election, the battle to bury neoliberalism, Pinochet’s enduring legacy, will continue in Chile.

In 1970 US president Richard Nixon ordered the CIA to “make the economy scream” in Chile under socialist president Salvador Allende. This same US tactic of bringing about regime change through economic sabotage drove Washington’s imposition of sanctions against Cuba’s new revolutionary government in 1961 (still in place today) and more recently against Venezuela under Chávez and now President Nicolás Maduro.

A 2019 report by a US thinktank found that US sanctions may have caused the death of as many as 40,000 people in Venezuela between 2017-18 alone. Despite this, and the farcical recognition of opposition politician Juan Guaidó as the president of Venezuela by the US, UK and others, Venezuela’s left remains in power. In Cuba, Venezuela’s close ally, sanctions continue to have a devastating impact and have contributed to widely covered anti-government protests. Nevertheless, the Caribbean island has still managed to develop its own Covid-19 vaccine (the only country in Latin America to do so) and continues its policy of medical internationalism. 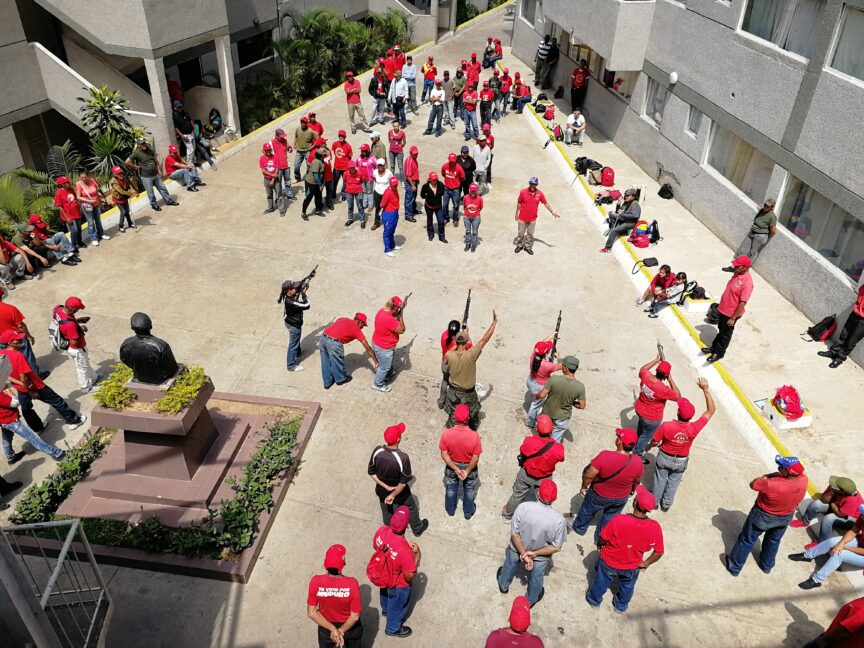 In Colombia, South America’s reactionary bulwark, a former left-wing guerrilla and mayor of Bogota, Gustavo Petro, is a serious challenger in the May 2022 presidential elections. He came second in 2018’s presidential elections with nearly 42% of the vote, a historic high for the country’s left. The victor, Ivan Duque, is the protegee of far-right former president, Alvaro Uribe, who presided over some of the worst human rights abuses Latin America has ever witnessed and who still casts a dark shadow over the country’s politics.

Despite continued mass violence against the left, in April this year Colombians took to the streets to protest neoliberalism and state brutality in the largest anti-government protests in recent times. As expected, the government’s response was severe, with scores murdered by the security services; dissatisfaction with Colombia’s “genocidal democracy”, though, may push Petro to victory. In the run up to May’s presidential election, Petro will have to face down the violence of a tireless ruling class campaign against him if he is to win. 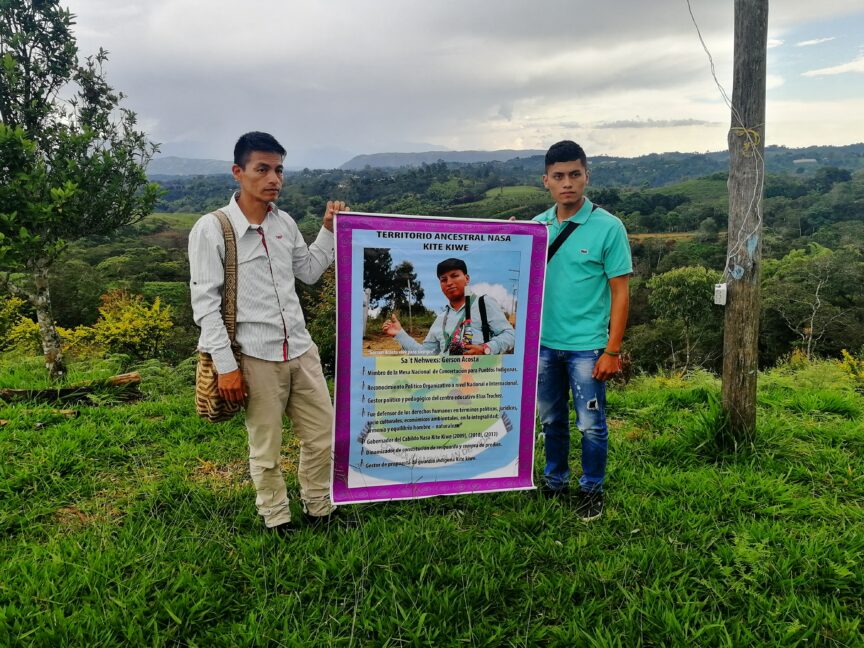 On the edge: Bolsonaro and Lula in Brazil.

The left also has a strong chance of returning to power in Brazil, a regional giant where political developments reverberate far beyond its borders. The election of the neo-fascist Jair Bolsonaro in October 2018 came after a US-backed parliamentary coup to topple the Workers’ Party president Dilma Rouseff in 2016 and imprison the popular former president, known as Lula, in April 2018.

Despite the corporate-controlled Brazilian media weaponising popular anger at corruption against the left, polls pointed to a comfortable Lula victory in the 2018 elections. Once again, Latin America’s right showed their willingness to use all options – including lawfare – to remove left-wing candidates that would defeat them at the ballot box. Lula was released in November 2019, long after the objective had been achieved. Support from the US government and the obfuscation of the facts by the wider western media were instrumental in Bolsonaro’s eventual victory. 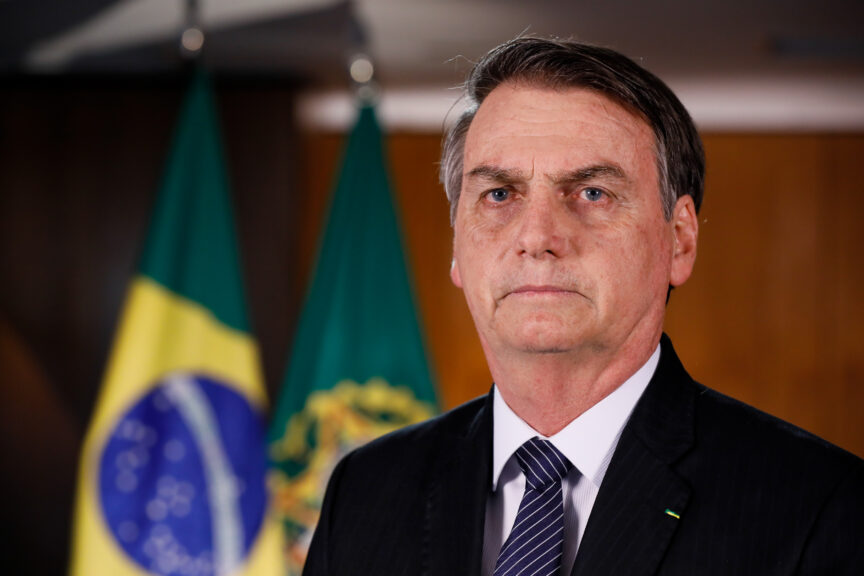 Credible polls show Lula winning the October 2022 presidential elections – but Lula has said he will only announce whether he will run early next year. Meanwhile, Bolsonaro is facing growing dissatisfaction at home and a recent congressional panel that recommended he be charged with “crimes against humanity” over his government’s handling of the Covid-19 pandemic. A reported 600,000 Brazilians have died from Covid under Bolsonaro (a death rate not so much higher than the UK’s in per capita terms).

If Lula does run, he will face similar obstacles to Petro in Colombia, and the possibility that Bolsonaro and sectors of Brazil’s elite will follow Trump’s example and attempt to block the election result.

In Nicaragua, a strong ally of Venezuela and Cuba, the Sandinistas (also under US sanctions) led by Daniel Ortega won an overwhelming victory in the 7 November presidential elections. Former Bolivian president Evo Morales called Ortega’s victory a defeat for “Yanqui [US] interventionism”. In contrast, Boric in Chile showed open hostility to Ortega’s victory, echoing a clear fault-line on Nicaragua in the left of Latin America and beyond.

Despite these and other tensions, the Latin American left will enter 2022 full of hope. A new international election observatory has been formed in challenge to the discredited Organisation of American States. Regional blocs like the Community of Latin American and Caribbean States (CELAC) have been resuscitated, primarily under President Andrés Manuel López Obrador’s presidency in Mexico. Mexico also played a key role in providing refuge for Morales after the coup in Bolivia before he went to Argentina for protection from the left-wing government of Alberto Fernández. Morales has now returned to Bolivia following Arce’s election. 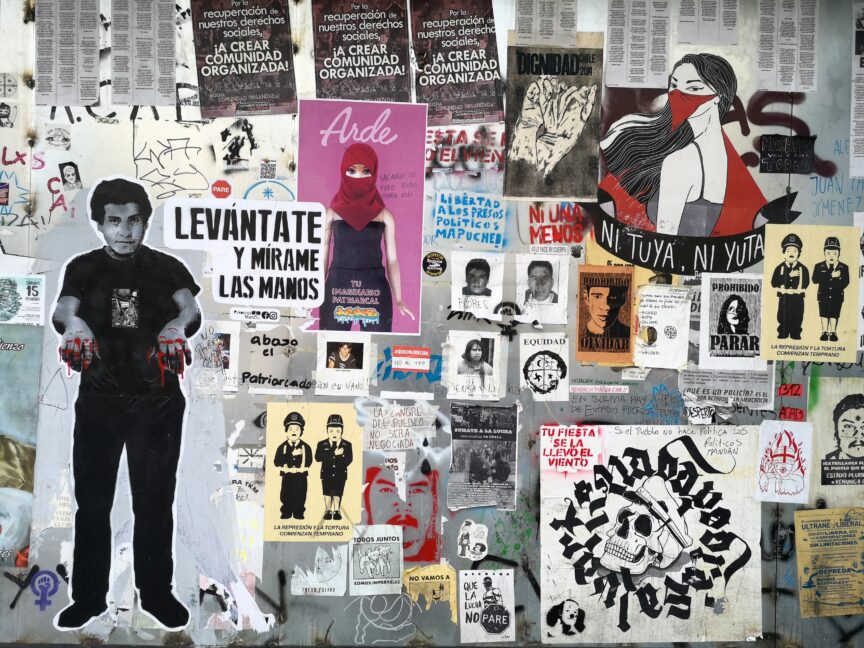 Slogans and a stencil of Victor Jara, outside the Gabriela Mistral Cultural Centre in Santiago, Chile. (Pablo Navarrete)

Crucially, popular uprisings have proven to be the inflexion points in fights with the right. In Chile and Colombia in late 2019 and early this year – countries presented to the world as neoliberal icons – and in Bolivia, mass street struggle has weakened the right. These blood-drenched right-wing forces will never give up their violent attempts to capture state power for the benefit of the few. Equally, the left in Latin America know they are the many: and will fight hard to represent the region’s political soul.

Pablo Navarrete is a journalist and documentary filmmaker. He is the founder and co-editor of Alborada, an independent voice on Latin American politics, media and culture.

Report: Chile Was the Birthplace of Neoliberalism. This Election Could Bury It

An unprecedented social eruption rocked Chile’s post-Pinochet consensus in 2019. With a new constitution set to be drafted, the presidential election has polarised between far-left and resurgent fascism. Michael Chessum reports.

The recent protests in Cuba have been framed by the international media as a sign of a regime in crisis. The social media war on the country, the impact of US sanctions and the mobilisation of thousands of Cubans in support of their government, however, are being deliberately downplayed, writes Helen Yaffe from Havana.

International: A Peasant-Teacher Just Won the Peruvian Elections, and the Right Can’t Handle It

After a failed attempt to nullify hundreds of thousands of left votes, the Peruvian right is now trying to provoke a constitutional crisis through delegitimisation and delay.