Is Bristol As Radical As It Seems?

“Is there something in the water in Bristol?” A question I am often asked by onlookers impressed by the city’s proclivity for protest. Indeed, it’s not uncommon for our local demonstrations here to make national, even international, headlines.

In March this year, thousands turned out for a Kill the Bill protest, culminating in a late-night siege between protestors and police. And who could forget 18th-century slave trader Edward Colston’s statue being rolled into the harbour during a Black Lives Matter protest in June last year?

Speaking of which, those accused of the toppling – the so-called Colston 4 – have stood trial over these past two weeks in Bristol’s crown court. But the statue’s removal has already been rigorously tried in the court of public opinion; celebrated by some, condemned by others.

While this is a city much celebrated for its radicalism and culture of resistance, it’s also a city with deep divisions.

Now seems a pertinent time to ask – what is happening in Bristol’s political culture?

No smoke without fire. 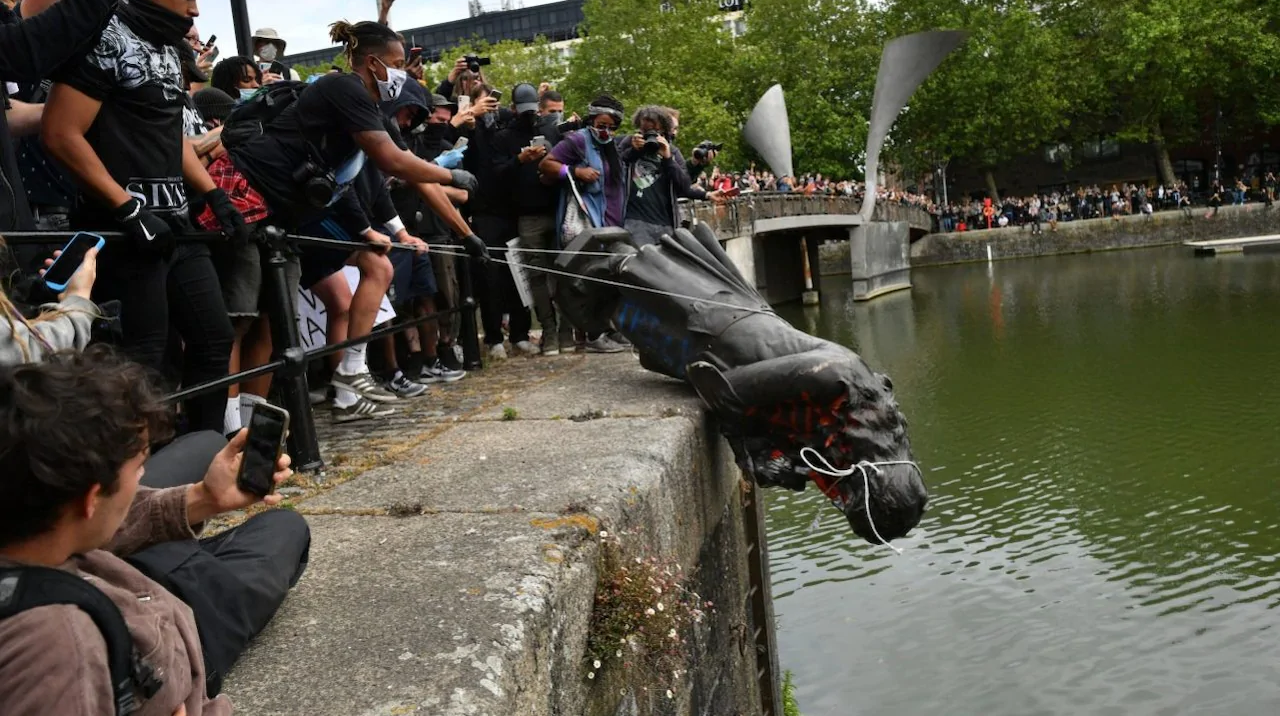 Bristol is not undeserving of its progressive reputation, but it can obscure the full picture. It’s true that the city holds a distinct radical history, particularly from the late 1990s. This new politics included Reclaim the Streets, anti-globalisation protests, international solidarity campaigns and counter-cultural expressions from Banksy’s street art and The Pop Group to the alternative sports scene of the Easton Cowboys and Cowgirls.

Bristol’s geography helps foster its politics: a small city where large networks of the politically active can form. Close enough to London to share in its trends, but far enough away that it remains autonomous, Bristol is something of a go-to for young progressives.

Ironically, the very reputation that draws people here has contributed to gentrification and stratospheric house-price inflation at a rate higher than London – a 68% increase in the last decade.

A map released by the House of Commons Library last year showed that more than 40 neighbourhoods in Bristol rank among the most deprived in England. Bristol South has 20 highly deprived neighbourhoods. Much of the city’s historic social and low-income housing lies on the outskirts of the city, a ring of council estates and tower blocks circling the largely gentrified inner-city.

Inequality is racial, too. According to a 2017 Runnymede report, ethnic minorities in Bristol experience greater disadvantage in education and employment than many other parts of England and Wales, particularly for Black African people. Bristol ranks 7th highest of the country’s 348 districts on the index of multiple inequalities.

Colston and the culture wars.

With that context in mind, let’s talk about the aftermath of the Colston toppling, a moment that will go down as an iconic example of Bristol’s radicalism. It was met by a backlash: one week after and about 30 metres from the empty plinth, a counter-demonstration took place.

A 300-strong crowd coalesced consisting of football supporters, army veterans and “ordinary people united to defend the Cenotaph,” as one banner read. “We are not FAR RIGHT … ALL LIVES MATTER,” the banner declared. A circle of leather-clad bikers from surrounding areas in the West Country rode around the demo, filling the air with the loud rev of their engines. 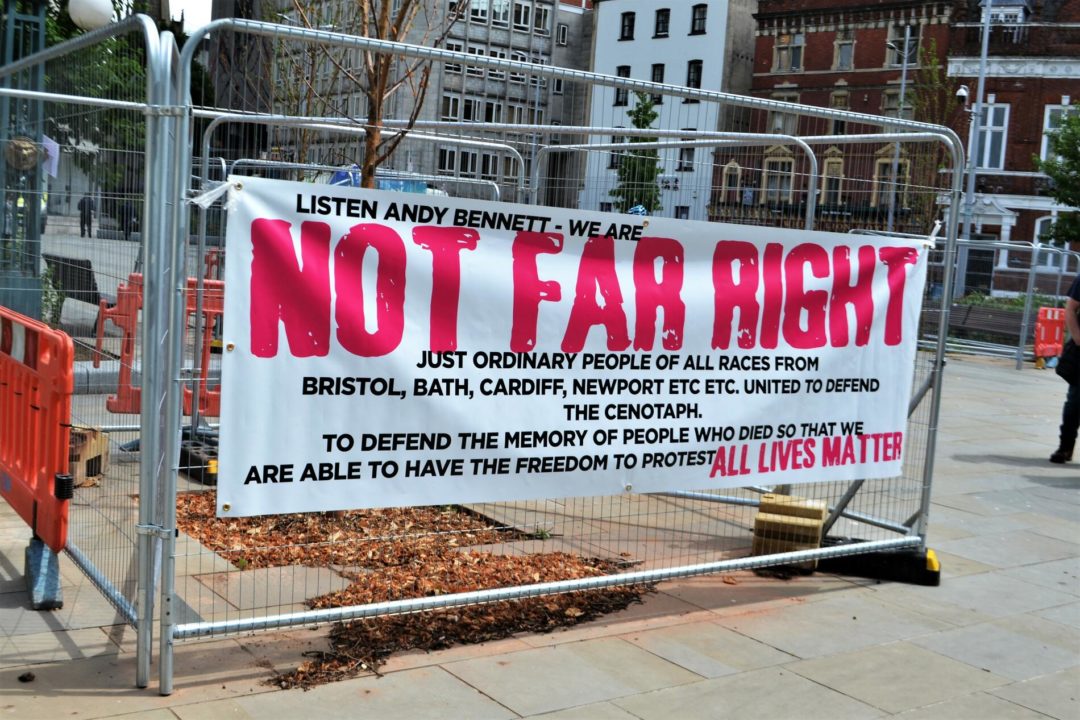 A man who had reportedly tried to fish the statue out of the river earlier in the week climbed on the empty plinth holding up a union jack. That guy was Nigel Horlock, a scaffolder from Hartcliffe, a suburb four miles to the south of the city centre, and a world away in experience.

“I think race is overshadowing the main problem of poverty, black people got it hard but the whites got it just as hard as well … It’s not about black and white, it’s about rich and poor and that’s what people need to understand,” said Horlock on the BBC documentary Statue Wars that aired in June.

The Tories were not only quick to denounce the statue toppling; they used it to fuel the fires of the culture wars. Robert Jenrick MP pledged to save Britain’s statues from “woke worthies” and “town hall militants” who want to “censor our past”. At the Bristol “All Lives Matter” march, such themes echoed: patriotism, “protecting our heritage,” broadsides against “snowflakes” and “cancel culture”.

Given Bristol’s radical, bohemian reputation, how do we understand the counter-demonstration?

Divides in the working class. 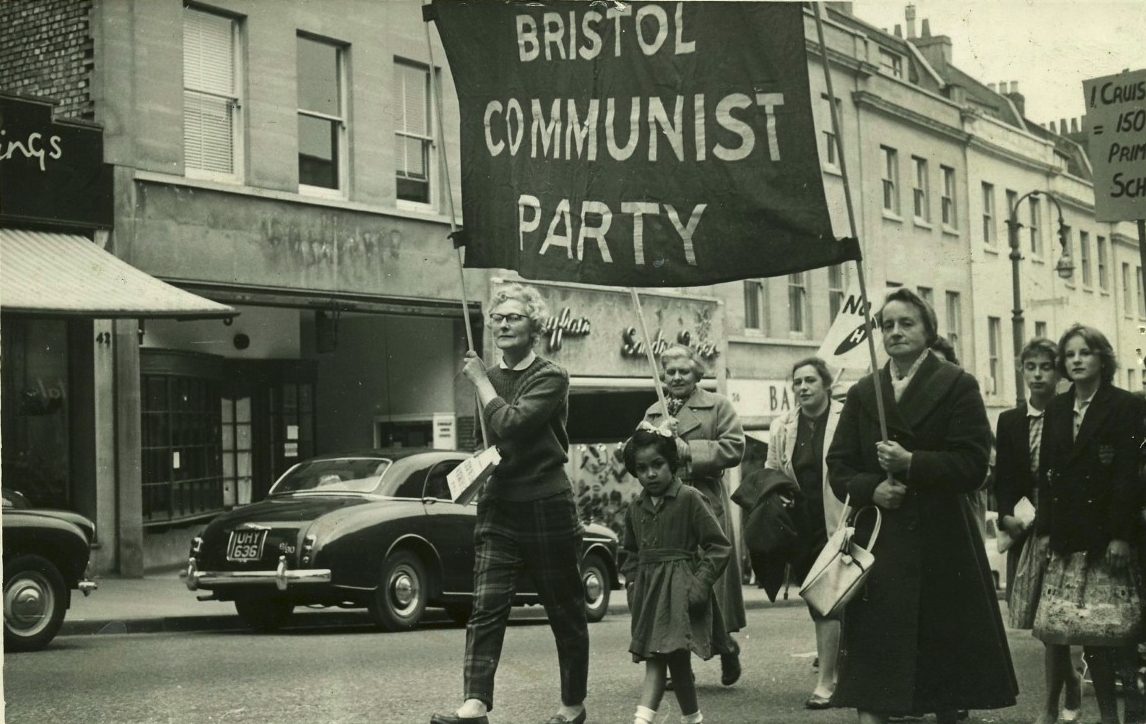 Communist party march in Bristol on May Day 1955. (Bristol Cable)

South Bristol has a long history as the regional epicentre of the organised working class. It was a bastion of the Communist party in the 20s and 30s, even sending men to fight in the Spanish civil war. The area of Bedminster saw fierce working-class resistance to the first world war, while in the 1930s local socialists and communists joined residents in Filwood to fight fascists. Moreover, both south and east Bristol have long been Labour heartlands, the latter having been the seat of the late Tony Benn.

So why then is this area no longer the epicentre of Bristol’s radicalism? And indeed, why is it increasingly an area for the far-right?

South Bristol is, perhaps, an example of the changing face of the left that Thomas Piketty and his colleagues discuss in their recent book, Political Cleavages and Social Inequalities.

Their analysis finds that historically, richer and more well-educated people tended to vote right, while the poorer and less well-educated citizens tacked left. Today, they argue, a different pattern has emerged: the right claims low-education, high-income voters, and the political left is constituted by the most educated (if often precarious and poorer).

This shift in the left is evident throughout the UK and other western countries. With the breakdown of the industrial proletariat and the organised working class, one of the left’s primary bases is among young, highly educated but precariously employed renters, often in urban areas.

While sharing economic interests, these two sections of the working class – urban graduate renters and the vestiges of the 20th-century proletariat in suburban estates and small towns – operate in two different habitus – that is, social worlds, values and ways of being. Generalising, the former tends to have left-wing cultural views and is highly au fait with the language of LGBTQ+ and racial politics. The latter is often alienated by changing languages and perceived threats to their national identity and heritage.

For a period, the Corbyn project appeared to bridge this divide, offering a programme that appealed to the economic interests of all sections of the working class. However, this project was ultimately brought down by the ability of the right to use these differences – on Brexit, race, and Britain’s history – as a cleavage to break working-class unity. Now without a unifying economic programme, Bristol – with its counter-cultural cache of radical protest – stands as a beacon for only one of these groups.

Bridging the divide: a strategic challenge for the left.

Writing in the New Left Review, Göran Therborn criticises Piketty’s dichotomy between class and identity. Therborn argues instead that class and identity politics are compatible, and “should not be understood as calling for different strategies of political change.”

How does this apply to Bristol? How does its leftwing move on from national defeat and appeal to both the young who made headlines burning police cars and bringing down statues, as well as the whiter, more socially conservative group?

The answer is that the coalition must be built on those things that unite Bristol’s diverse working class. A dedicated activist base must be used to meet the demands of working people from all parts of the city.

That is exactly what Bristol’s Acorn branch is doing. The community union has seen membership increase consistently, and Bristol is now one of Acorn’s largest branches. Though not officially a renters union, the ubiquity of poor quality, insecure and expensive private renting makes this issue its primary concern. And it has delivered: from resisting evictions to winning legal cases, Acorn has fought and won. But it does more than that – it also campaigns on social issues that everyone can get behind. Most recently, it occupied the city hall’s toilets, protesting against the council’s closure of public lavatories. 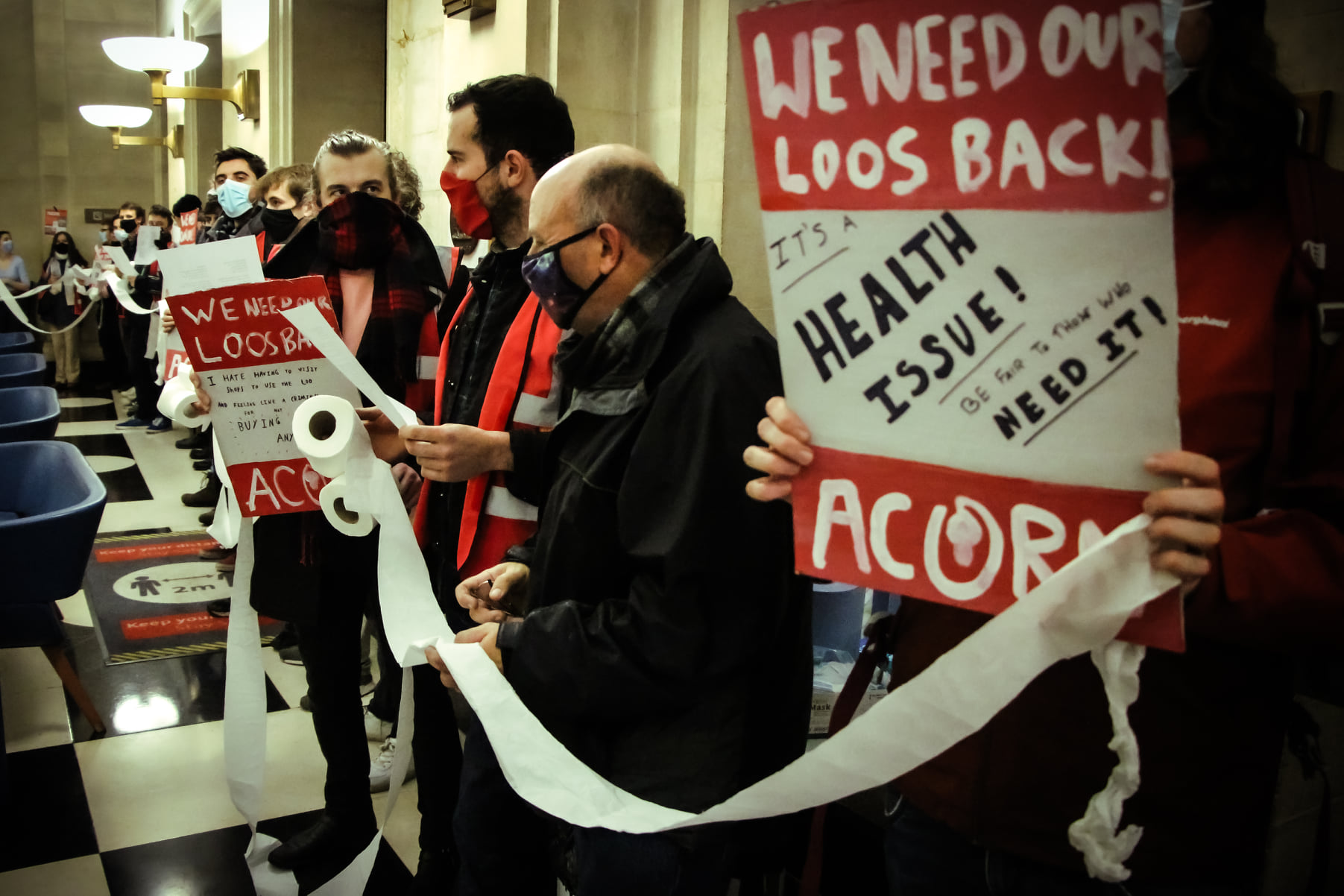 Bristol’s reputation for radicalism is not for nothing – recent protests have captured a national mood of anger. The city is a beacon for the left in a country where the right is ruling and the far right is on the rise. But we must draw on the whole history of Bristol’s working-class struggle. We need to show that the fight for equality is not a zero-sum game and that racial equality doesn’t come at the cost of class struggles – they’re interrelated. Bristol needs to fight on all fronts – taking down slavers, resisting increased police powers, fighting for more secure housing and – indeed – demanding more toilets.

Priyanka Raval is a freelance journalist based in Bristol, writing for The Bristol Cable.

Long Read: What Happened to Kill the Bill?

The PCSC bill is on the brink of entering law, and yet the movement to kill it has all but evaporated. Activists haven’t given up, though - they’re simply changing gear to a longer-term project of abolition. Rivkah Brown reports.

Does the Police, Crime, Sentencing and Courts Bill pose a serious threat to movements on the left? The gang convene to discuss the politics of protest.

Feature: What Happened to the Bristol Police?

A force known as relatively progressive has come to epitomise the extreme police response to the Kill The Bill movement. For some it’s a shock. For others, it’s business as usual.