Has Nigel Farage’s Climbdown Guaranteed a Tory Win in the South Coast’s Most Brexit Town?

“Are you here for the quilting group or the election?” asks an elderly lady on the gate of a church in a West Sussex seaside town. So begins my bizarre night at the only political event being held in the constituency of Bognor Regis and Littlehampton. I’m here to see each of the six parliamentary candidates answer questions from voters in this safe Tory seat which has been held by Nick Gibb since 1997. But even here it looked like the Conservatives could be in trouble when anger over the government’s handling of Brexit spilled over into the EU and local elections earlier this year. In May the Tories lost control of Arun District Council which they’d held since 1973 and in the EU elections nearly half of all votes cast went to Nigel Farage’s Brexit Party.

Except sitting in the packed church hall ready for the hustings it soon becomes clear that the audience (the voters) will not be allowed to speak. Instead the chair, an evangelical man named Rory, will read out questions he has selected from a pile of 30 emailed to him prior to the event. Clapping, commenting, cheering or jeering is to be kept to a minimum he says, and proceeds to put his finger to his lips and shush anyone who gives any kind of reaction over the next two hours.

A series of somewhat bizarre and in some cases offensive questions are put to the five men and one woman on stage. Where do the candidates stand on abortion seeing as Christians are pro-life? What about the “sickening rise in child sexualisation” which the anonymous questioner links to the fact they are being taught LGTBQ issues in school? Can the panelists comment on white people becoming a minority in Britain by 2060 and the link between rising crime and immigration in towns across the UK?

Some women at the front get frustrated towards the end and demand to ask a direct question. “We’ve sat through all of this and that’s what we’re here for,” one woman angrily tells the chair. “This is part of the democratic process,” shouts another man in the audience. An increasingly flustered Rory concedes that they can ask their question which is about Waspi women’s pensions, something affecting 7000 local constituents, but Gibb doesn’t want to engage with them. “Afterwards,” he says firmly, “I want to talk about it afterwards,” looking at the table and shutting the conversation down. As the hustings comes to an end Gibb shoots out of the door, not engaging with the women. I follow him outside to see if I can catch up, but he is gone. 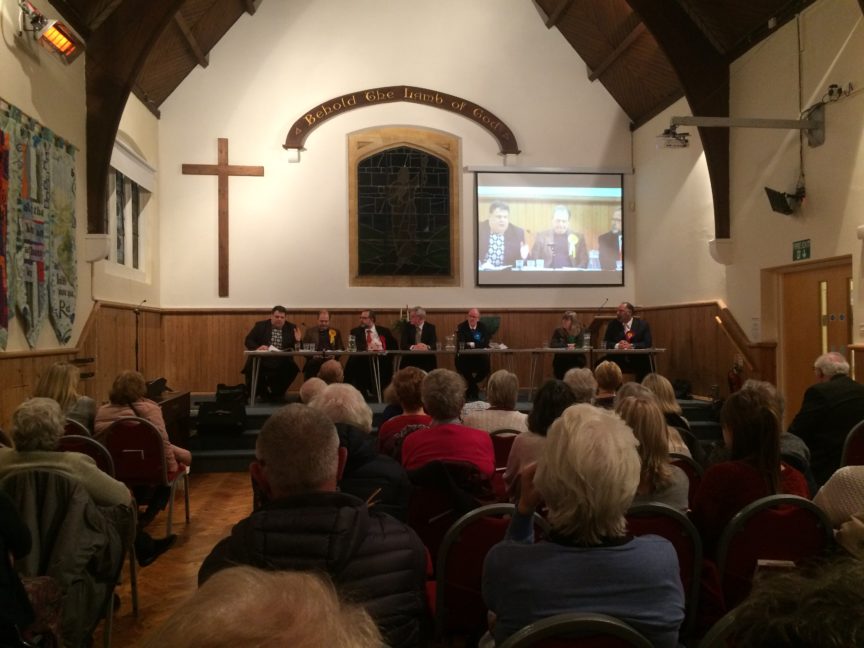 The A-roads going in and out of Littlehampton and Bognor Regis are flanked with large blue placards telling drivers to vote for Nick Gibb. Otherwise there’s not much sign that an election is about to happen. Twinkly lights and Christmas trees are everywhere with people busily going about their business, buying presents and wishing this wasn’t dumped on them in the middle of December.

“It’s a right pain at this time of year,” a postwoman tells me as she lugs her bag around on a freezing cold day in the well-to-do village of Middleton. “We’ve got all the Christmas stuff to deliver and now all these political leaflets as well”. She hasn’t decided who she will vote for but Brexit is high on her mind and she feels angry it hasn’t happened after three and a half years. “I thought Boris would do it, but that hasn’t happened.” She is surprised when I tell her the Brexit Party is no longer standing here. “See, I need to find out more before I vote. I need to read up, talk to people and decide,” she says.

“I don’t know who I’m voting for yet,” another woman out walking her dog tells me. “I know I’m not voting Tory but I can’t decide between the others. It’s been unexpected and I’m undecided.”

In Bognor Regis town centre, I find many others saying they are yet to make up their minds but with nearly 65% of people voting to leave the EU in the 2016 referendum, Brexit looms large. The Brexit Party looked set to take a chunk of the votes here before Farage withdrew from all seats won by the Tories in 2017. The candidate for Bognor Regis and Littlehampton, Hartley Elder, told local newspaper, the Bognor Post, he had been “made aware at the very beginning, that if we entered into an alliance with the Conservatives then some candidates would be asked to stand down. The unilateral alliance we currently have would not be my first choice, but I fully understand and accept the national strategy”.

This Brexit Party “alliance” looks to have played well for the Conservatives in this constituency, they are now predicted to sweep up 62% of the vote. Of those people I find who have decided which way they’ll vote, nearly all say Tory. “I voted for Brexit,” 75-year-old Colin tells me, walking into the train station, “but will vote Conservative this time”. He’s not a fan of local MP Nick Gibb who he says, “is not much good,” and while he says Boris’ intentions are good, he thinks “he’s a bit of a buffoon”. But he wants to see the UK leave the EU. “I used to vote Labour,” he says, “I was even a trade unionist, but once you get past a certain age you realise their policies aren’t sensible”.

According to the local council voting registrations are up by more than 1500 compared with 2017. Charlotte, who is studying primary teaching at the nearby University of Chichester is one of those newly registered and says her vote will go to Labour. “Most of my friends will vote the same way,” she says. “I don’t want Brexit to happen and I’m concerned about the NHS.”

Other people I speak to talk of their concerns about the NHS or feel angry with the current government but that doesn’t automatically translate into Labour votes. A feeling of frustration and helplessness runs through many of the encounters I have. The phrase “I don’t trust any of them,” or “I don’t like any of them,” comes up again and again. “I might vote for the independent candidate just to help him save his deposit,” one man in his 40s tells me. “I’ve voted Tory in the past, my 92-year-old nan does, my mum does, they will this time but I won’t.” He feels angry that Brexit has dragged on for so long and wants it sorted out “one way or the other,” but says he doesn’t trust any of them to do it. “I’ve flirted with the Lib Dems in the past but never voted Labour, I don’t know why, it’s your upbringing I suppose.”

Harry, checking tickets on the gates says he won’t be voting. “My vote means nothing,” he says. “My father was staunch Labour, he’d never let me vote Tory, he’d turn in his grave.” But living in a Tory stronghold of nearby Worthing he says his vote won’t count anyway. “I always register to vote,” he says, “but I don’t go”.

But the next person I speak to has other things on her mind. Standing outside the station entrance in the rain, Delia, a woman in her 40s says she won’t be voting. “I’m trying to find a roof to put over my head at the moment, being homeless means voting’s not high on my agenda,” she tells me. Delia has been spending her days at the council offices and nights on friend’s sofas after a family breakdown left her homeless. It’s an issue affecting many people in the two towns where emergency accommodation is hard to come by and street homelessness is visibly on the rise. Even if she does decide to vote she thinks it would be pointless. “They all seem to be arguing and fighting about Brexit anyway,” she says. “I can’t see a lot happening to make any difference.”

Natalie Leal is a freelance journalist.