Radical Compassion? Why the West Midlands Needs to Know About Liam Byrne’s Record on Immigration

In the West Midlands the Labour party is currently in the process of selecting its candidate for metro mayor. Viewed by some as a fight for the soul of the party in the region, the mayoral selection is high noon for the Labour right – for whom the West Midlands has been a stronghold for more than three decades.

The left’s candidate is anti-war activist Salma Yaqoob, while the right has fallen in line behind one of the founders of Progress and current MP for Birmingham Hodge Hill, Liam Byrne.

One of the contentious issues of the selection is Liam Byrne’s politics on immigration, in particular his parliamentary election campaigns in the safe and diverse seat of Birmingham Hodge Hill, as well as his time as one of Tony Blair’s immigration ministers. In October the Twitter account BAME Labour Birmingham posted an open letter entitled ‘Liam Byrne MP Alienates West Midlands BAME Community’. The letter accuses Byrne of contributing to “a hostile environment for migrant workers” and questions his fitness as a candidate for the region.

The letter also references one of the leaflets from Byrne’s 2004 by-election campaign which condemned the Liberal Democrats for opposing “tough new laws to remove benefits from failed asylum seekers”.

We need to unite our party to win this election – the last thing we need right now are Galloway-style politics of falsehoods and division that have emerged this week. pic.twitter.com/YfbMixvM9X

Liam Byrne responded to BAME Labour Birmingham’s letter on Twitter, where he stated that he “never saw, never authorised and never distributed” the leaflets. Byrne also followed his statement with an article defending his record as immigration minister. In the article – published on Labour List – Byrne plays down his part in the establishment of a hostile environment for migrants by arguing that he was merely responsible for committing to the wrong language rather than to the wrong actions. 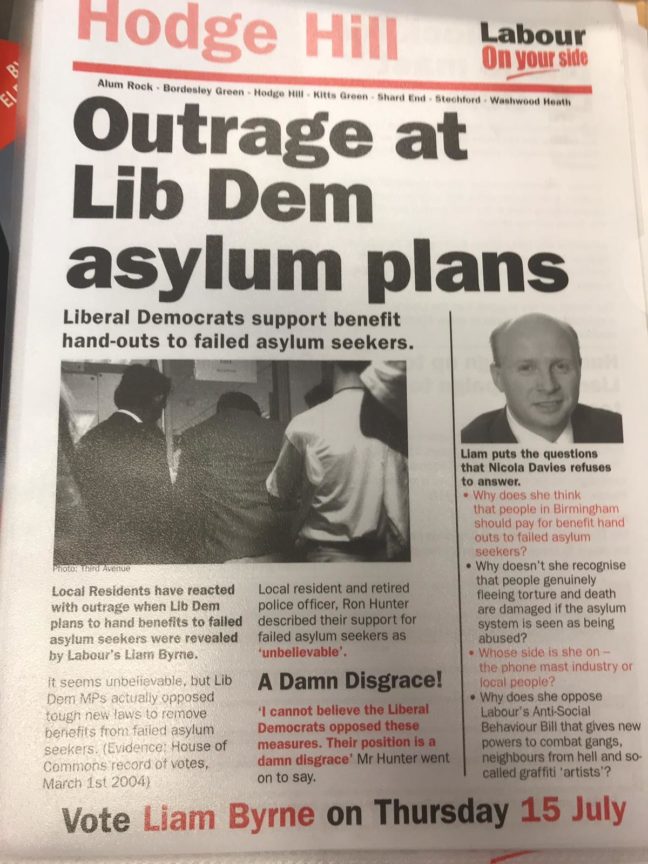 Byrne has worked tirelessly to rebrand himself as a radical socialist ahead of Labour’s West Midlands mayoral selection. However, as recently as 2015 the Birmingham Post reported that his election leaflet for the Shard End area of his Hodge Hill constituency advocated that “stronger border controls, new exit checks to count people in and out of the country, ban visa overstayers and bring back fingerprint checks for illegal migrants in Calais” were needed.

In his statement in October, Byrne described himself as a progressive immigration minister during his time at the Home Office between May 2006 and October 2008. He credits himself with reforming a service not fit for purpose, protecting trafficked women and increasing offers of asylum.

However, it was under a previous immigration minister, Tony McNulty, that the Sectors Based Scheme was reviewed and partially scrapped. And while rates of asylum applications being approved did increase while Byrne was in post, the statistics place this figure in its true context. According to page 26 of the 2009 Home Office statistical Bulletin: “In 2009, the proportion of initial decisions that were refusals increased to 72% compared with 70% in 2008”, i.e. under Byrne.

Last year, the Court of Appeal (Criminal Division) quashed a 2008 conviction against a victim of sex trafficking who had been tried in 2008, while Byrne was immigration minister, for being in possession of false identity documents.

Delivering the judgment, Lady Justice Thirlwall noted that: “On 29 July 2008 she [the trafficking victim] entered guilty pleas at the Crown Court at Leeds to two counts which arose out of the same circumstances: possession of a false identity document with intent contrary to Section 25(1)(a) of the Identity Cards Act 2006”.

Clearing the victim’s name after nine years, Thirlwall added that “awareness of the law and procedure in relation to the rights of people who had been trafficked was limited at that time”, but that “those rights existed, irrespective of the level of awareness of them”.

Back in November 2006, Byrne changed the immigration rules relating to highly-skilled migrants whose skills were needed in key sectors of British society.

The changes prevented migrants who had entered the UK under the Highly Skilled Migrant Programme (HSMP) having their permission to remain in the country extended unless they could show that they had been earning at least £32,000 per annum. Skilled migrants also had to prove their English language proficiency in an entirely new way, despite already having to speak, read and work in English. The fact the changes were applied retrospectively caused huge anxiety to professionals who, in numerous cases, had given up everything in their home country to come to the UK.

The legality of the changes was even challenged in the courts. Byrne’s department was the defendant in a 2008 case in which the judge, Sir George Newman, stated: “I am concerned about the repeated refusal to consider the undeniable evidence of hardship and the extent of the special commitment required of those migrants which has been placed before the defendant from a number of quarters. I am satisfied… that the defendant proposes to act unlawfully, and the Court should intervene.”

In 2008, Liam Byrne proudly told the BBC that “We remove an immigration offender every eight minutes – but my target is to remove more, and remove them faster. We need more detention space.” His comment followed the announcement that the Home Office had entered planning applications for the construction of new immigration detention centres, including the controversial immigration removal centre at Yarl’s Wood.

A year earlier, Byrne had described plans to curb illegal working in unequivocal terms: “What we are proposing here will, I think, flush illegal migrants out. We are trying to create a much more hostile environment in this country if you are here illegally”.

Liam Byrne may well have coined the term ‘hostile environment’, but his record suggests he adopted its politics before Theresa May entered government. Today, the tagline for his campaign to be Labour’s mayoral candidate in the West Midlands is ‘Radical Compassion’. Labour in the West Midlands should consider whether or not it needs another empty slogan or Blairite triangulation strategy – especially when Byrne’s record has stirred such concerns over his own compassion towards migrants.

Charles Garry is a community activist in Birmingham and the Black Country.

Brexit will make it far harder for asylum seekers to be reunited with their families. Unaccompanied children risk falling out of the asylum system and into the hands of smugglers and traffickers, reports Lauren Crosby Medlicott.

Opinion: The Home Office Doesn’t Care Who It Deports – the Jamaica Flight Proved This

Activists and lawyers should not have had to intervene this week to stop the Tories deporting people with a legal right to be in the UK, writes Nadia Whittome MP. The Jamaica deportation flight shows that for the Home Office, if you're black, poor and have a foreign passport, that's enough to fast-track you out.

Just a week after a report found the government’s hostile environment policies broke equalities law and contributed to injustices faced by the Windrush generation, the Home Office plans to deport up to 50 men to Jamaica on Wednesday. Sophie K Rosa reports as activists race to stop the flight.

Opinion: The Left Must Stop Buying the Right’s Lie That They’ve Won the Working Class

The idea that Trump and Brexit were working-class revolts is a dangerous myth, one the president's recent electoral defeat has done little to dispel, writes Aurelien Mondon.

Report: Deportation Flights to the EU Have Increased Threefold, As the UK Rushes to Return Asylum Seekers Before Brexit

Exclusive: The UK has chartered as many deportation flights to the EU so far in 2020 as in the past three years combined, in a bid to accelerate the removal of asylum seekers before Brexit. Rivkah Brown reports.

Exclusive: The UK is rushing to return asylum seekers to the EU before Brexit makes it harder to do so. Data obtained by Novara Media shows the UK made up to 154% more transfer requests to Germany, Switzerland, Spain, Ireland and Denmark this year, an uptick lawyers say has resulted in a catalogue of harmful and unlawful failings. Rivkah Brown reports.

The ruling coalition of white property owners is ageing out of the electorate. A progressive majority, made up of young tenants and communities of colour, is set to replace it.