While the Tories Remain in Power, Austerity Will Never Be Off the Agenda

Former Chancellor of the Exchequer George Osborne declared last week that, whilst the government was right to spend in the midst of the coronavirus pandemic in order to keep the economy going, when the crisis was over, the country would need to return to “a period of retrenchment and trying to bring public sector debt down”.

Bringing public sector debt down does not necessarily require swingeing cuts to state spending, which can – as policymakers should have learnt from the last twelve years – actually exacerbate the scale of public debt relative to GDP by curtailing output. Many orthodox macroeconomists will tell you that a far better way to reduce the debt to GDP ratio will be to increase public investment to boost growth and tax revenues.

But clearly, this is not what Osborne means. His references to ‘retrenchment’, as well as the clear pride he takes in the austerity programme he introduced in 2010, which the BMA has shown took the lives of at least 120,000 people, suggest that he will advocate for another round of deep cuts.

Osborne will use his not insignificant influence to lobby for cuts to the NHS, social care, local government, education, public investment and other areas of the public sector that Boris Johnson has declared will see an end to austerity under his prime ministership.

It is clear that austerity 2.0 will only do yet more damage to the British economy – which was already weak before the coronavirus crisis hit – by causing wages, productivity and private investment to fall even further, along with tax revenues.

The left has made these arguments time and time again over the last four years. Austerity, we have argued, doesn’t work – even on its own terms – and it causes an immense amount of human suffering. Taxes, MMT academics have shouted from the rooftops, don’t fund public spending.

When all is said and done, they will fall back on common sense and lived experience: if you rack up a lot of debt, obviously you’re going to have to pay it back. If I can’t create money out of thin air to repay my credit card loans, then why should it be any different for the government?

In the wake of Labour’s 2019 defeat, which saw the election of a Conservative government, which even before the crisis looked likely to signal a break with Osbornism, many on the left claimed that Corbyn had ‘won the argument’ on austerity.

And while it’s true that public support for higher taxes and more public spending was up by the start of the 2020s, this wasn’t because the majority of the population had suddenly seen the light, read the academic literature and realised that austerity doesn’t work.

It was because after more than a decade of suffering, they believed we had paid off most of what we owed and could afford to loosen the purse strings somewhat. But as the response to Labour’s 2019 manifesto demonstrated, ‘somewhat’ is the operative word. 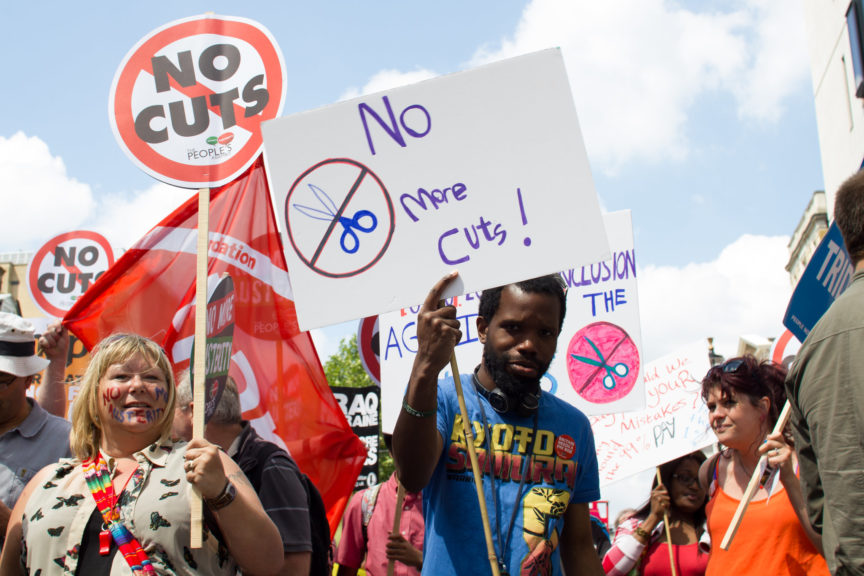 There is absolutely no reason to believe that public opinion will not favour a return to austerity when this crisis is over. It is embedded deep within our common sense understanding of the world to assume that after a period of largesse – a spending spree, a heavy drinking session – comes a period of atonement – a payback, a hangover.

These assumptions are strengthened by the lived experience of modern capitalism, which substitutes rising wages for cheap credit, only to create a mountain of unpayable private debt that hangs heavy over the heads of working people.

Neither can we depend upon the Conservative party to have realised that austerity failed on its own terms. Tory austerity was never about reducing the burden of public debt – an abstract and, beneath a certain level, largely meaningless indicator for an advanced economy like ours.

Instead, Tory austerity was about further compromising the power of working people relative to the ruling classes, in the wake of a financial crisis that threatened to wreak permanent damage to an ideological status quo premised upon the assumption that free market capitalism brought only stability and prosperity.

The left must be aware that the same arguments made in the wake of the financial crisis will be trotted out in the wake of this pandemic to justify public spending cuts designed to erode the power of working people. ‘We’ve had our fun, now we must all chip in and tighten our belts’ – never mind that it will be the very nurses, doctors and social workers who have been putting their lives on the line to fight this crisis who are being asked to foot the bill.

The power of this argument will, in fact, be strengthened by the cascade of sovereign defaults we are likely to see in the global south as the crisis worsens, and the ‘international community’ utterly fails in its obligations to provide any relief.

Preparing for the return of the disaster capitalists who will use the chaos created by this crisis to try to augment their own power and wealth requires socialists to ditch the academic arguments in favour of common sense narratives, rooted in the lived experience of working people.

We all have an intuitive understanding of the power dynamics that characterise our society – bosses, bankers, politicians are the ones with the power, and they tend to use it for their own ends.

The left can build on this understanding to argue that people like Osborne just want to heap the costs of the financial crisis on those least able to bear them, in order to shield themselves and their friends from the consequences of the pandemic.

They want the nurses, doctors and social workers who have saved countless lives to bear the costs of this crisis, rather than the corporate executives, bankers and investors who benefitted from state support at its peak.

Keir Starmer – the compromiser and technocrat – will not be comfortable with this language. Socialists in the Labour party must make these arguments for him.

Grace Blakeley is an economics commentator and author of Stolen: How to save the world from financialisation.

Opinion: Queer People Have Had to Rely on Each Other This Year, and Christmas Is No Exception

In the absence of adequate government support, queer people have created networks, organisations and structures to care for each other throughout the pandemic, writes Harry Gay. Christmas will be no different.

Analysis: Only the Left Can Save Brazil From Bolsonaro in 2021

Bolsonaro's chaos-making coronavirus strategy and ruthless attacks on his opponents have paid off: the Brazilian president closes 2020 with higher approval ratings than ever. Yet this year has also seen a resurgence of the Brazilian left, one that could halt the country's slide into authoritarianism, writes Benjamin Fogel.

The Year in Review

At the turn of the decade nearly 12 months ago, some said that we were on the verge of entering a new Roaring ’20s. How prescient they turned out to be. One pandemic and a global economic freefall later, all the assumptions we started out with in January have turned to dust. In their place […]