Black Britannia: There Is a Long, Racist History of State Surveillance of Black Communities

The current Black Lives Matter protests are once again exposing issues of police racism and brutality, not just in the US but in the UK too. Indeed, punitive measures towards Black communities have been enacted by the British state, and its auxiliary branches, since the advent of Commonwealth migration, with government anxieties reaching their peak in the late 1960s and ’70s.

Secret intelligence documents from 1967 to 1970 unearth the unbelievable steps taken by the British government to control Black Power mobilisation.

Despite these efforts, the British movement witnessed one of the most effective instances of anti-racist collective action and caused great anxieties for the British state. Fears over the activities of Black Power activists led the government to undertake an extensive and covert surveillance mission, aimed at suppressing any challenges to its authority.

In 2010, while conducting research for their biography on former British Black Panther Darcus Howe, historians Dr Robin Bunce and Paul Field were the first to discover the existence of this surveillance operation and access Special Branch documents on the British Black Power movement.

In subsequent years, through the use of the Freedom of Information Act, Bunce and Field forced government departments to release more surveillance files. These documents, which have been archived by The Special Branch Project, expose the true fragility of the British government during the years 1967 to 1970.

As well as highlighting the fears of previous governments, these files provide a unique opportunity to not only reflect on past surveillance strategies but also situate and understand them within our present-day political climate.

The threat of the US.

State surveillance of Black Power activity in Britain began in response to the increasingly fraught race relations in the US, with the government fearing a similar wave of Black radicalism and revolutionary fervour spreading overseas.

The 1960s marked a rise in anti-racist confrontations in America, and by 1966, sectors of the Black community adopted a more militant stance, leading to the creation of the radical group the Black Panther Party. The assassination of civil rights leader Dr Martin Luther King Jr led to increased advocacy of Black radicalism, with the shock of his death, in the eyes of many, exposing the ineffectiveness of the non-violent resistance he championed.

Panicked by the anti-racist mobilisation in the US, and anxious about its own status as its colonial influence waned, the British state began monitoring the domestic influence of Black radical politics. Black people’s presence in Britain could be seen as a kind of transgression of colonial boundaries, with ‘subjects’ now in the territory of the imperial ‘motherland’. If this wasn’t threatening enough in the eyes of the imperialist state, the prospect of the younger generation adopting militant anti-authoritarianism propelled it into action.

Indeed, the threat of Black radicalism was presumed so high that a Black Power Desk was formed by order of then-Home Secretary Roy Jenkins and specifically tasked with collecting intelligence on Black political groups in the UK.

In the early years, the Black Power Desk’s concerns were on a smaller scale, focussing on Hyde Park revolutionaries such as Michael de Freitas, Roy Sawh and Obi Egbuna. A 1967 letter, from a legal secretary at the Royal Courts of Justice, addressed to the Director of Public Prosecutions (DPP) acknowledged the “marked effect” that these speakers had on “susceptible coloured persons in the audience”.

Sawh’s controversial, yet humorous, speeches included analyses of imperialism, domestic legislation and the history of Black subjugation. The content of his speeches often resulted in tense confrontations with some of his white audiences.

Government documents spoke of the Metropolitan police’s fear that “extremist white persons will take the law into their hands” if prosecutions were not made on Sawh and other rebellious speakers.

An anonymous letter from seven “peaceful inhabitants”, also written to the DPP, illustrates the grave threat to Sawh’s safety. In the letter, the authors threatened to “beat this black bastard to death [or] kill him” if no action was taken. The limited cache of documents that the government approved for release fail to explain what action was eventually taken. However, the composers of the letter clearly failed in their mission to silence Sawh as he continued with his incendiary speeches.

A shift in focus.

By 1968, the attention of the authorities, in particular the Home Office, turned towards Americans residing in Britain. Secret documents show the government alarmed at the “activities of certain [white] dissidents”, such as Allen Ginsburg, who was involved in setting up the ‘Anti-University of London’, which taught subjects like Black Power and ‘Madness and Revolution’.

The state was also highly concerned about the frequency with which African American revolutionaries, such as Stokley Carmichael and Malcolm X, were visiting Britain, given the fervour of the Black Power movement in the US. Home Office documents stated that “for prestige purposes, the [British] movement needs a visible connection with Black Power in America” and suggested that Black Britons may “try and capitalise on the proposed visit of negro lawyer” Floyd McKissick, who was known for his fiery anti-racist delivery. 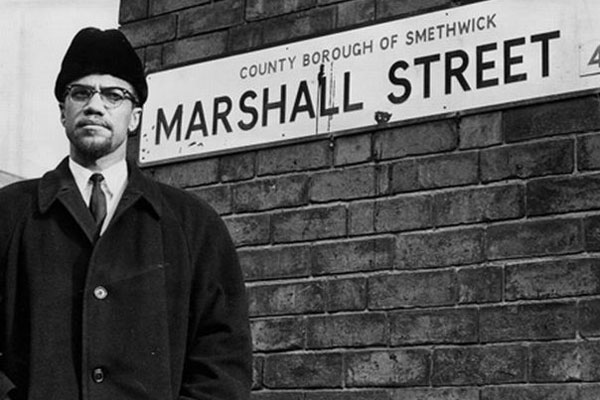 Malcolm X on a visit to Birmingham

Indeed, Carmichael’s Black Power advocacy at an international radical conference at the Camden Roundhouse resulted in Jenkins banning him from re-entering the country.

Despite the intense level of surveillance of Black radicals, state documents repeatedly played down the immediate threat posed by the Black Power movement in Britain.

However, in an interesting foresight, chairman of the Joint Intelligence Committee Denis Greenhill warned of the possibility of increased Black radicalism in the 1970s. Greenhill wrote that in subsequent years, Britain would have a wave of “coloured youngsters” leaving school who “unlike their parents will expect full equality of treatment, job opportunities and the [ability] to buy decent houses”. If denied equal treatment, he cautioned, “they will form educated and frustrated minority groups [who could become] targets for communist subversion and may spontaneously develop pro-black and anti-white attitudes”.

The state’s anxieties, however, were not solely focussed within Britain. In 1969, the First International Black Conference was announced, this time drawing the attention of prime minister Harold Wilson. The pan-African unity displayed by the conference highlighted the globality of the Black struggle, thus posing a further threat to Britain as a dwindling colonial power. Indeed, the conference itself was held in Bermuda on account of it being one of the last remaining colonial strongholds – to this day, the island falls under the jurisdiction and sovereignty of the UK.

Amidst calls from the Bermuda government to ban the event, Wilson backed the Ministry of Defence’s plan to send 80 police officers and marines to standby in case there were “disturbances” Bermuda’s authorities could not control. Despite the imposing police presence, however, the state’s concerns were ultimately not realised.

A classified report on the Bermuda conference

With the movement at its peak, Black Power had taken firm hold in the British metropole in 1970. As Black radicalism spread across the country, the police response, in turn, intensified. Indeed, documents from the Black Power Desk at the time illustrate the meticulous operation that was at play.

Home Office intelligence teams profiled key activists such as Althiea Jones-Lecointe, deemed “the brains” behind the movement, and Barbara Beese, a “leading member” of the group, who had close associations with actor and “benefactress” Vanessa Redgrave. Meanwhile, Darcus Howe, who later went on to become a Channel 4 broadcaster, was accused of being a “writer of black extremist literature”.

These documents offer a glimpse into the strategies employed by the British state in their attempts to limit the impact of Black radicalism. It is even implied that informants were used, with certain members or close allies of the group offering information to Special Branch investigators. 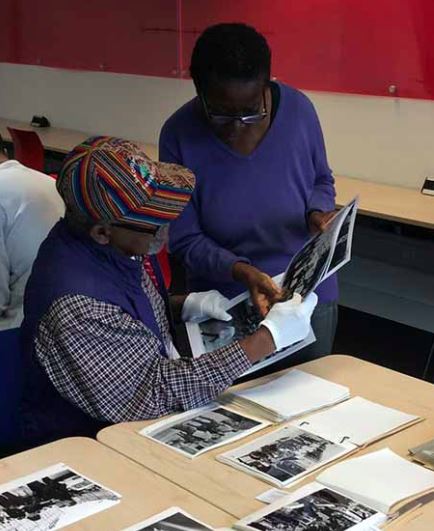 Leila Howe, a former member of the Black Unity and Freedom Party, spoke of the group’s awareness of informants within their organisation. “We were always aware of being infiltrated,” she recalled. The organisation’s central committee, having witnessed similar instances of informants in the US, met “secretly away from certain members”.

Despite these sophisticated attempts to infiltrate the movement, the trial of the Mangrove Nine in August 1970, dealt a seemingly fatal blow to the police’s operation. The victory of the nine Black radical defendants in challenging police racism and brutality was a landmark moment in transforming racial justice in the UK and demonstrated the state’s inability to control or eradicated Black radicalism.

However, according to Field, far from being shut down, the Desk may have instead become a part of the Metropolitan police’s undercover unit, the Special Demonstration Squad, which infiltrated and disrupted social justice movements, including Black civil rights groups, well into the 1990s.

These unearthed documents are just a small selection from a far larger catalogue of Special Branch and Home Office files. The restricted access to this intelligence makes it hard to truly understand the scope of the state’s mission. Despite being limited in membership, Black Power groups in Britain appear to have caused considerable anxiety for the government. However, as Field suggests, state surveillance of anti-racists groups and Black communities was not just limited to the 1960s and 70s.

Since the height of Special Branch’s surveillance into Black radical activity, police powers have broadened in their scope, taking on new and increasingly advanced forms.

From using undercover officers to spy on the family of murdered Black teen Stephen Lawrence’s family to the ongoing deployment of controversial stop-and-search powers, the state’s surveillance strategies are not merely limited to Black radical activists but extend to the community at large.

In November 2019, prime minister Boris Johnson seemed to echo the sentiments of his predecessor and architect of the ‘hostile environment’, Theresa May, when he supported expanding police search powers. These policies are reminiscent of the infamous Sus stop-and-search laws, which Black Power groups passionately resisted in the 1970s.

Meanwhile, just two weeks ago, Middle East Eye reported that the Home Office had been running veiled social media campaigns, aimed at young girls, as part of its counter-terrorism campaign.

The advancement of modern technology has served only to further facilitate the police in its surveillance of marginalised communities. Civil liberties campaigners, such as Big Brother Watch, have voiced their opposition to the police’s intention to use facial recognition technologies to detect suspected criminals.

As has been frequently pointed out, such measures will disproportionately impact Black, asian and minority ethnic communities, due to institutional and technological racism. And with the rise of anti-racist collectivism currently taking place, one can only imagine the steps the government may be taking to prevent further protests and challenges to authority.

In order to meaningfully address decades of systemic racism, governing institutions in Britain must show transparency in their community operation and be willing to redress their years of punitive policing of Black people.

This article is the second instalment in Black Britannia, a series which reflects on the country’s black radical history.