The Northern Independence Party Is a Triple Threat to Labour

The conventional wisdom on the Northern Independence Party (NIP) is that it’s a fad; a meme party born on Twitter with no real prospect of winning more than a handful of votes from frustrated Corbynite activists. Its failure to register with the Electoral Commission in time for the Hartlepool by-election has only lent credence to these views. Former Labour aide James Matthewson labelled the party a “glorified joke”, while ex-Corbyn advisor James Mills has argued that the only thing NIP “will likely achieve is another Tory MP”.

Then came a shock poll from Survation: the NIP looks set to beat the Greens, Lib Dems and Reform UK into third place in the Hartlepool by-election, with 2% of the vote. This is a pretty stunning showing for a party that was founded in October and hasn’t spent a penny on campaigning since. 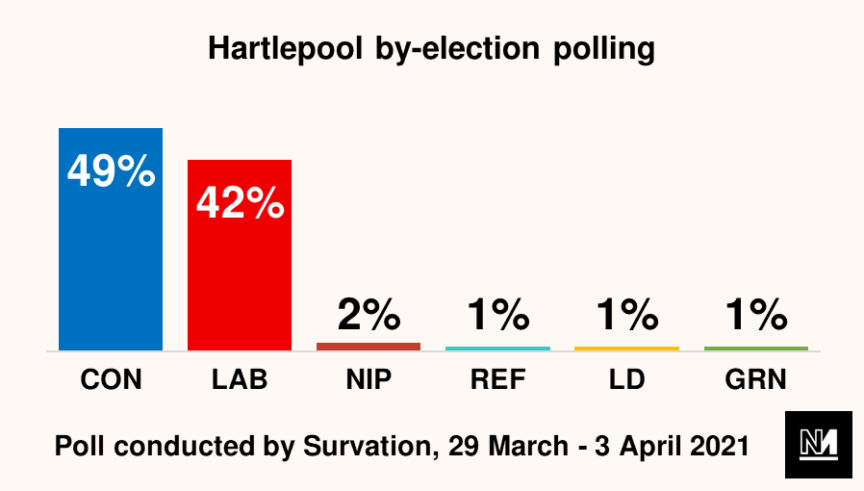 Yet if we look at the polling performance of other regionalist and left-wing parties in the north, we soon see that the NIP’s success is not unprecedented. We also see that the NIP is combining other parties’ strengths in a wholly original way, and in so doing, poses a real threat to Labour both in Hartlepool and beyond.

The NIP is not the first political party to promote a devolved north, though it is the first socialist party to do so. There have been an array of localist and regionalist parties in the north over the years, ranging from the Northern Party (founded by a former Tory MP) to the Morecambe Bay Independent Party (which forms the opposition on Lancaster Council). These parties are fishing in a deep pond: SavantaComRes polling suggests that significant numbers of voters in the existing city-regions want more power for their regional metro mayors. This high support for regionalism and devolution in the north should be unsurprising, given that northern areas were hit hardest by the Thatcher government in the 1980s, despite having voted overwhelmingly for Labour.

In recent years, the most successful regionalist parties have been the Yorkshire party (YP) and the North East party (NEP) both of which support devolved assemblies for their regions. These two parties have achieved relative electoral success, especially within the context of the first-past-the-post (FPTP) system.
The YP, founded in 2014, is a “social-democratic” party that supports a devolved Yorkshire Assembly with powers over education, environment, transport and housing. Their policies range from their support for a ban on fracking to a graduate tax on university students. The party attracted headlines after it outperformed Change UK in Yorkshire and the Humber in the 2019 EU elections.

The YP won 1% of the county’s vote in 2019 (doing best in Normanton, Pontefract and Castleford with 4%). By far the YP’s best electoral result, however, was the 2018 Sheffield City Region mayoral election: the party came in fourth, with over 22,000 votes, or 9% of the vote. The party currently has 7 local councillors across three local authorities; their strongest area is Selby, where they hold four of the 31 seats on the district council.

The NEP, meanwhile, calls itself “progressive” and supports a devolved assembly for the north-east. Like the NIP, it is also standing a former Labour MP – Hilton Dawson, member for Lancaster and Wyre 1997-2005 – in the Hartlepool by-election. The NEP only ran two candidates in the 2019 general election, but both did relatively well: 4% in Easington and 3% in Stockton North. The party’s greatest performance to date was at the 2017 Durham Council election, where it won 2% of the popular vote and three out of the 126 council seats. 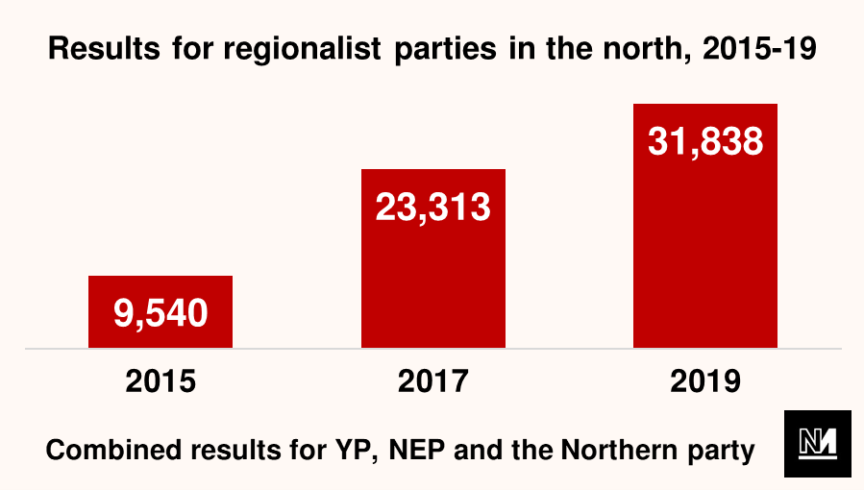 Whilst these parties have achieved relatively small constituency vote shares, that level of support can be enough to cost Labour victory in a close election like Hartlepool. In 2017, Labour lost Pudsey by just 331 votes (0.7%) while the Yorkshire party won 1,138 votes (2.1%).

Regionalist parties are not the only smaller parties to have seen considerable success in the north. Smaller left-wing parties have also thrived in the region, where there remains significant support for many of Jeremy Corbyn’s flagship policies. 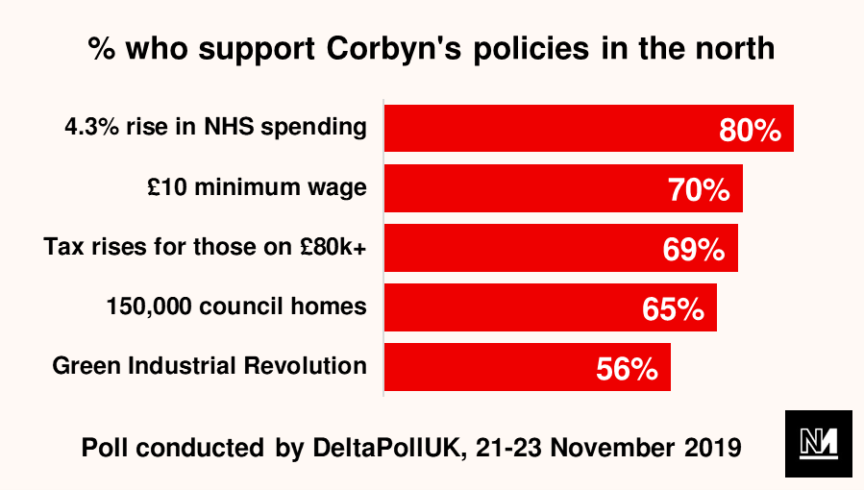 The Trade Unionist and Socialist Coalition (TUSC), the Socialist Labour party (SLP) and the Respect party have achieved small yet significant electoral results in the region in recent years.

While the TUSC, an alliance of left-wing parties formed in 2010 to oppose austerity, has not stood candidates in general elections since 2015 (choosing to support Corbyn’s leadership instead), it did perform well that year, and best in Barnsley Central (1.6%), Liverpool Riverside (1.3%) and Leigh (1.2%). In recent years, the party has also won respectable vote shares in mayoral elections in Liverpool (5.1%), the Liverpool City Region (2.7%) and Doncaster (2.4%).

The SLP, meanwhile, has declined since its height, but it remains an important example of how small leftist parties can perform well in the north. Founded in 1995 by former mineworkers’ union leader Arthur Scargill in opposition to Blair’s New Labour, the Socialist Labour party’s best result was in the 2001 general election when it won over 2% of the vote in 15 northern constituencies. As late as 2009, it won 1.6% of the Northern vote in the European elections.

Finally, Respect – an anti-war, left-wing party founded to oppose the Iraq War – achieved respectable vote shares in several northern seats in 2005: 7% in Preston, 4% in Sheffield Central and 1% in Tyne Bridge. It is notable for being the only small leftist party in Great Britain to win a parliamentary seat between 1945 and 2010, in the form of George Galloway, who sat as a Respect MP for Bethnal Green and Bow from 2005 to 2010 and for Bradford West from 2013 to 2015.

Having established that there is a small but sizeable audience for both northern regionalism and democratic socialism in the North, the question is: can the NIP successfully combine these two traditions?

It depends upon how one defines success. As things stand, the NIP has no prospect of winning parliamentary seats within the next decade, or even saving their deposit in Hartlepool by winning 5% of the vote. Labour, then, is unlikely to be worried. After all, the past two decades are littered with failed leftist parties that have not challenged it in any real sense.

The difference is that these parties have wanted to be little more than a left-wing version of Labour. In this respect, the NIP is different. Instead of pitching itself as another leftist party or another northern party, it has carefully positioned itself as a party of northern socialism.

It’s easy to see how, compared with a colourless Keir Starmer, the NIP’s strong northern identity, unapologetically left-wing policies and passionate activists make a potent cocktail. The NIP isn’t going to win Hartlepool, but it could easily cost Labour key seats in the future (especially with the Tories so far ahead in the polls). With leftism still popular in the north, regionalism on the rise and Labour’s red wall no longer solid, Starmer needs to take the NIP seriously – or it won’t seem like a joke much longer.

Analysis: Ulster Unionism is in Crisis – And the Fallout Could Soon Get Worse

The centenary of Irish partition had once been an awaited psychological milestone for Ulster unionists. Yet the discontent expressed through the loyalist riots of the past ten days reflects a deep-seated crisis of the political architecture built into Northern Ireland, writes Tommy Greene.

Analysis: How We Win: The State

If we aren’t preparing to use power, we are preparing to have it used against us. The left needs a state strategy, starting with municipal socialism to lay the groundwork for a national programme.

Opinion: The Tories Treat Britain’s Regions Like Dirt Because They Think They’re Still Governing an Empire

On Tuesday, following a stand-off, Downing Street imposed a tier 3 lockdown on Greater Manchester without agreeing a support package with local leaders. Aaron Bastani argues the government's contempt for regional defiance is a vestige of Britain’s imperial past.