Branson, Musk and Bezos are utterly unsuitable to lead the frontier of space privatisation.

The race to explore the cosmos has always been dogged by questions of equity. This is especially true now that space tourism is on the verge of transitioning from futuristic fantasy to obscenely expensive reality. For every spectacle of space discovery – from Neil Armstrong stepping on the moon to the mind-blowing satellite images of our solar system – there are millions of people left on earth suffering from a lack of resources.

Since NASA was established in 1958, it has spent over a trillion taxpayer dollars (adjusted for inflation). In the US, a country in which 4.5% of deaths in a single year – which amounts to roughly 900,000 people – were found to be attributable to poverty, extravagant celestial projects may seem a poor allocation of taxpayer money. Similarly, the Soviet Union was estimated to have spent the equivalent of $5bn on its Sputnik and Vostok programmes in the 1960s, a decade in which it is estimated around 40% of the population were living in poverty.

While proponents of space exploration argue that it has an invaluable trickle-down effect on science and innovation, its critics say we have no business looking to the stars until we can guarantee the health and prosperity of all those on earth.

Such perspectives, however, should not be mutually exclusive. We have more than enough resources to both explore ‘what’s out there’, and to ensure a life of security and dignity for everyone on this planet. The problem is that those resources are currently being hoarded at an unprecedented level by a handful of wannabe bond-villain billionaires who are now competing in their own privatised space race.

The space race was once between nation state superpowers.

The current concentration of global wealth is so extreme that understanding it is more a question of imaginative exposition than concrete calculation. The estimated net worth of the world’s super elite fluctuates by more each hour than the average worker would earn in several lifetimes. Oxfam calculated that the richest one percent have more than twice as much wealth as 6.9bn people, whilst almost half of humanity is living on less than $5.50 a day. 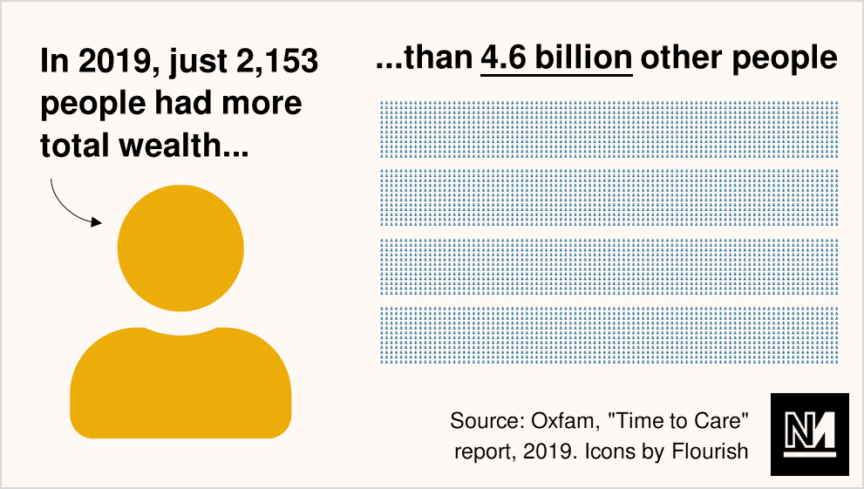 During the coronavirus pandemic, which has claimed millions of lives and decimated many more, the world’s 2,365 billionaires have gotten $4tn richer – a 54% increase on their already obscene pre-pandemic collective wealth. The extra money ‘earned’ by the top ten wealthiest men alone would be more than enough to pay for every person in the world to be vaccinated – with enough change to spare to eradicate global poverty as well.

Increase in net worth this year:

One of these men, the outgoing CEO of Amazon, Jeff Bezos, is worth over $200bn. He makes around $2,537 every second of the day – which is more than the average American worker brings home each week. Meanwhile, for Amazon factory workers in the UK, it would take eight weeks to earn Bezos’ per-second income.

Like an even more dull version of Formula One, Bezos has been swapping places at the top of the world’s rich list with faux-genius and epic meme-lord Elon Musk. After briefly overtaking Bezos earlier this year, Musk will have to console himself with the mere $176bn he is currently estimated to be worth. This amounts to a daily earning of $38m, and is greater than the annual GDP of more than half the countries on earth.

The struggle to be the king of capitalism is not the only contest that Musk and Bezos are currently locked in. Evidently tired of mortal pursuits, the two are now battling it out to be the first billionaire to go to space. The accelerating rivalry between Musk’s SpaceX and Bezos’ Blue Origin has gone down to the wire, with clashes over a launchpad at the Kennedy Space Centre and battles over patents relating to landing rockets preceding the final battle into orbit.

Since the start of June, Bezos has been in pole position, with a trip to space planned on 20 July alongside Wally Funk, an aerospace pioneer with a name that Thomas Pynchon would think is a bit over the top. But all this changed with a surprising last minute entrant into the race: Richard Branson. Weighing in at a paltry $5.7bn net worth, which barely qualifies him a spot in the world’s 600 richest people, the Virgin magnate is now set to pip Bezos to the post by nine days, with the last-minute announcement that Virgin Galactic had secured permission from the US Federal Aviation to take paying customers to space. He is set to launch from New Mexico on 11 July. “I truly believe that space belongs to all of us,” said a giddy Branson. It’s a shame he doesn’t hold the same belief about our health service; Virgin Care has received billions of NHS contracts in recent years.

Indeed, the earthbound track records of Branson, Musk and Bezos make them utterly unsuitable to lead the frontier of space tourism.

Far from their self-propagated myths of rugged individual ingenuity and risk-taking, the wealth of this trio – as in the case with all billionaires – is built from a familiar recipe; inherited wealth, ruthless monopolisation, the creation of speculative financial bubbles that become too big to fail, the exploitation of workers and the busting of their unions, systematic avoidance of taxation, utter disregard for environmental sustainability, and receipt of generous state subsidies. If these practices are beamed beyond the stratosphere, the future looks bleak.

The story of Jeff Bezos.

Much has been written about the dystopian future dangers of the privatised expansion into space. Indeed, this jockeying to be the first zero-gravity billionaire and to open the taps of elite commercial space travel could herald the beginning of a new era of cosmic colonialism.

As Novara Media’s own Aaron Bastani writes in his book Fully Automated Luxury Communism, space exploration holds endlessly beneficial and valuable possibilities. But this utopian potential will not be reached if earth’s ghoulish ultra-elites continue to insist on hoarding and exploiting raw materials – in this case, those of the cosmos. Billionaires are inherently monopolistic and extractive. If their destructive business model is projected into outer space it could lead to a future straight out of the pages of the most dystopian science fiction. Indeed, the privatised air supply on a Mars colony envisioned by Phillip K. Dick in his short story We Can Remember It For You Wholesale (made into the film Total Recall) may prove to be grimly prescient.

Space tourism, which is the ostensible goal of Bezos, Musk and Branson’s celestial competition, will also be restricted to the super wealthy. Bezos will be accompanied on his rocket by an unnamed auction winner who paid $28m for the privilege. The suggested ticket costs for a trip into space are around a quarter of a million dollars. Virgin Galactic has a waiting list of 8,000 people, with 600 ‘confirmed’ customers, including celebrities like Justin Bieber, Rihanna, Ashton Kutcher and Mila Kunis, all of whom are reportedly willing to pay $250,000 each for a flight.

In this way, the collective potential of cosmic exploration risks being abandoned for a profit-driven approach, which means such experiences will only be accessible to the elite few who can afford them. The reduction of space travel to the narcissistic pastime of the super rich shows that, for all its promises of modernisation, nearly half a century of neoliberalism has delivered yet another gilded age defined by an unsustainably unequal distribution of resources.

We need to stop billionaires from privatising and monopolising space. And even more urgently, we need to dismantle the economic system that has put them on the precipice of doing so.

Joe Duffy is a writer with a particular interest in climate justice, radical history and fiction.

Long Read: How Do We Solve a Problem Like Amazon?

Amazon isn’t the type of problem that can simply be fixed, writes Craig Gent. In order to take on one of the defining companies of our era, we need to make Amazon's punishing work process our business.

Opinion: Filth: Space Junk Is Always Somebody Else’s Problem – But Eventually Someone Is Going to Have to Clean It Up

As the Silicon Valley space race speeds up, we must solve the problem of space junk, writes Eleanor Penny. From Elon Musk's flashy satellites to the detritus of past Soviet missions, our stratosphere is clogging up. Unless organisations of accountability are formed, it could soon spell disaster.