If you want to win, don’t marginalise the left.

At the start of 2021, shadow foreign secretary Lisa Nandy relayed a message from social democratic parties abroad. There was a sense of relief among Labour’s sister parties, she said, that Jeremy Corbyn was gone. Nandy’s intervention was notable for many reasons, but the most noteworthy aspect was that Labour’s sister parties in Europe are hardly performing better than he did. Indeed, those who have followed a trajectory of triangulation and centrism have performed catastrophically.

From Italy to Ireland, the past 20 years are littered with examples of European social democratic parties that have adopted rightwing policies and/or governed with the right. Almost all of them have experienced devastating defeats, most of them have not recovered. Meanwhile, the few that have recovered have only done so by partnering with people that, in Britain, have now been marginalised: namely, the left. With the British centre-left in disarray, learning lessons from their European counterparts is necessary – but those lessons imply a different path than the one currently being pursued in Britain.

Overall, the past two decades have been dispiriting for European social democrats. At the beginning of 2001, centre-left parties led the government in 11 of the current 28 EU member states. This included some of the largest nations in the EU, namely Germany, the United Kingdom and Italy. By 2021, that figure had fallen to just six.

Of course, losing elections is not a new phenomenon: parties lose all the time, and many return to power just a few years later. Rather, what is notable about the decline of European social democratic parties is how far their support has collapsed (in some cases, it has completely evaporated) leaving them in no position to return to power for the foreseeable future.

At the start of the new century, a total of 21 major EU social democratic parties (out of 28) had the backing of 30%+ of voters. By 2021, that figure has fallen to just three: Malta’s Labour party (55%), the Portuguese Socialist party (36%) and the UK Labour party (32%). And even in the latter two, support has fallen by a significant amount.

The map below shows how support for the main social democratic party changed in each EU nation between 2001 and 2021:

Why did this happen? As one might expect, each country was different, and the 2007 financial crisis played a big role. But analysing the results shows some clear patterns, and offers clear lessons for the UK’s centre-left.

Perhaps the most famous example of centre-left failure in Europe was in Greece, where the Panhellenic Socialist Movement (Pasok) won a big majority in 2007. Following the financial crisis, Pasok implemented austerity measures and went on to lose 119 of its 160 MPs in the 2012 general election. The party never recovered. 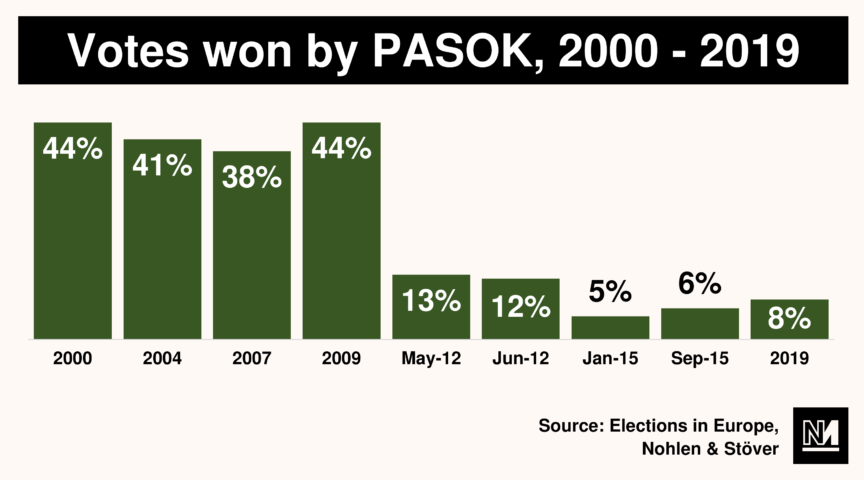 But it wasn’t just Greece. Implementing austerity resulted in a massive, shattering electoral defeat for the Irish Labour party too. In the 2011 election, the incumbent Fianna Fail government was swept from power after a backlash to their austerity measures. Labour achieved its best-ever result, coming second for the first time ever, and formed a coalition with the centre-right Fine Gael party. After implementing austerity, Labour went on to lose 30 of its 37 seats, their worst ever result. They still have not recovered. 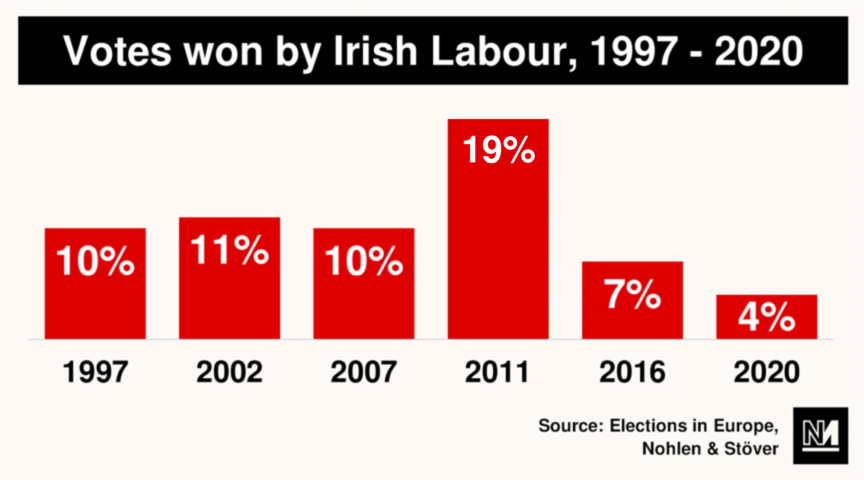 At the same time, simply forming coalitions with the centre-right has been disastrous for social democrats too. In Germany (2013), Slovakia (2016) and the Netherlands (2012), centre-left parties formed coalitions with rightwing or centre-right parties and went on to lose massively in the following election. Overall, the message is clear: veering to the right hasn’t helped social democrats return to power. Instead, it’s pushed them further away. Again and again, social democrats across Europe have shifted to the right – and invariably, the outcome has been a devastating defeat, not a huge victory.

Yet there are exceptions to this European-wide tale of decline.

In Spain, the Spanish Socialist Workers’ party (PSOE) returned to power in 2018 as a minority government and cemented its rule after two 2019 elections. It was only able to do so by co-operating with the leftwing Podemos (‘We Can’) party, first informally and finally through a coalition government – Spain’s first since the 1930s. Not only that, but the PSOE did not win by shifting to the right: rather, PSOE leader Pedro Sanchez ascended to power on a platform of increasing unemployment benefits, reversing austerity and ending “neoliberal capitalism”.

Sanchez went on to lead his party to its highest share of the vote since 2009. 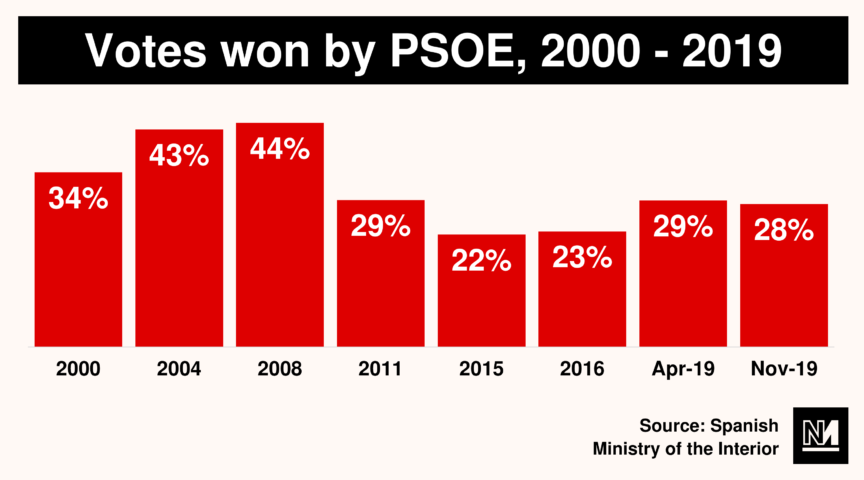 Sanchez was not the only centre-left politician to shift his party to the left and win. In neighbouring Portugal, Socialist party leader António Costa ran on a platform of easing austerity and boosting disposable income for ordinary people. In the 2015 election, he took his party back to power after co-operating with leftwing parties. After governing from the left, Costa was re-elected in 2019 with 108 of 230 seats – his party’s best result since 2005. 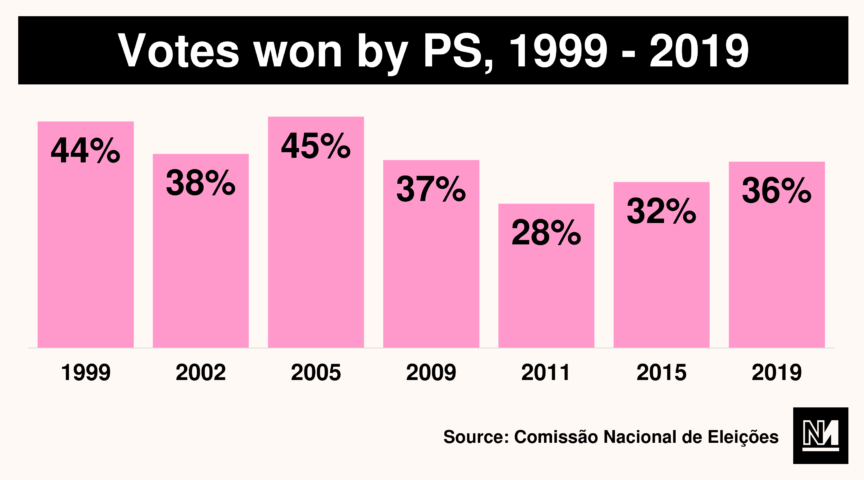 Having reviewed these examples, the lessons we can learn from Europe seem clear. Firstly, shifting to the right and adopting pro-austerity policies does not result in electoral success – rather, the opposite is true. In Ireland, Greece, Italy, Portugal and Spain the centre-left was virtually wiped out after shifting to the right. Secondly, backing popular leftwing policies has revitalised parties that were on the verge of irrelevance. And finally, working with leftists is far more productive than side-lining and marginalising the left, as seen in Spain, Portugal and the Nordic nations – and results in electoral success far more often than co-operating with the centre-right.

As the British centre-left searches for a way forward, it could do far worse than to learn from the most successful social democrats in Europe: the Spanish PSOE, the Portuguese Socialists and the Nordic centre-left. None of them won by sidelining and marginalising the left, but rather through working with them and implementing popular policies like ending austerity. If, instead, the British centre-left chooses to emulate the example of Pasok in Greece of shifting to the right, then the “sense of relief” that Lisa Nandy spoke of will very quickly turn to a sense of dread as the Conservatives return to power yet again.