He breathed new life into the ideology.

David Graeber’s untimely death on 3 September 2020 left a great void in contemporary anarchism. His theory of anarchism, built through his participation in anarchist politics, and discussed in his many books and essays, breathed new life into the ideology, shaping the politics of an entire generation, and influencing public discourse in a way that very few anarchist intellectuals have been able to do.

In the anarchist tradition of theory informing practice and practice informing theory, not only was Graeber shaped by the ideology, he himself shaped it too.

Towards an anarchist politics.

Although he was raised in a political household – his mother was a union worker and his father fought in the Spanish civil war – and began to identify as an anarchist as a teenager, Graeber’s understanding of the ideology only began to mature as a result of his experiences organising in the anti-globalisation movement.

Graeber was an active participant in the Global Justice Movement in the 1990s, and in the anti-free trade protests in Quebec City and New York in the early 2000s. During this time, he studied the anarchic tendencies within these movements, and, inspired by their effectiveness, began to develop his own interpretation of anarchism. Central to his interpretation – and also to the antiglobalisation movement itself – were two concepts: direct democracy and prefigurative politics.

Direct democracy is a mode of social organisation in which every citizen votes on all important decisions. As Graeber himself puts it: “It is about creating and enacting horizontal networks instead of top-down structures like states, parties or corporations; networks based on principles of decentralized, non-hierarchical consensus democracy.” While prefigurative politics is the act of behaving in a way that reflects your political values.

“Revolutionary action is not a form of self-sacrifice, a grim dedication to doing whatever it takes to achieve a future world of freedom. It is the defiant insistence on acting as if one is already free.”

If not now, when?

Prefigurative politics was at the core of Graeber’s anarchism – he believed that it was “something you do not an identity”. His politics was rooted in practice; it was about demonstrating the viability of anarchist principles, not through theory, but through living them out in your daily life. For Graeber, there was no particular set of social conditions needed for social revolution; we just had to start and dare the state to stop us. Rather than struggling for some far-off anarchist future, he argued that we should be creating the kind of anarchist spaces we wanted to see in the present.

Perhaps the best example of this can be found in Graeber’s participation in, and influence on the Occupy Wall Street movement, which adopted several modes of organisation he had written about, including direct democracy and prefigurative politics. Spokescouncils, consensus decision-making and affinity groups – all anarchist modes of organising – were key organisational structures in the movement; while the camps themselves, which Graeber helped to organise, were essentially anarchist spaces established and operated without a centralised authority.

This advocation for practice-based anarchism – which he termed “small-a” anarchism – led Graeber to critique more traditional strains within the movement – “capital-A” anarchism – such as anarcho-communism and anarcho-syndicalism, but, in particular, those forms that adhered to a fixed programme, such as platformism. In Graeber’s view, such prescribed readings of the ideology were too rigid and insular, making them unappealing for mass participation. His anarchism, by contrast, was playful and inclusive, creating space for individuals to shape the world according to their political beliefs and values.

Some took issue with Graeber’s unflattering portrayal of capital-A anarchism, leading to fractures in the movement that still reverberate today. Despite this, Graeber had an overwhelmingly positive influence on contemporary anarchism. He not only theorised how to live without a state; he demonstrated how to do it. And what’s more, through his intellectual work, he presented all the other people, past and present, who were doing it too.

The value of anthropology.

In this way, just as Graeber’s activism was vital in shaping his anarchism, so was his academic life. A professor of anthropology at LSE, Graeber took what he learnt in his research and used it to enrich his anarchism, making the case for its place in academia in the process.

Graeber only fully realised the political value of anthropology as a graduate student conducting fieldwork in Madagascar. While there, he saw firsthand how various Madagascan tribes organised their affairs without the presence of the state. Coming from the west – where the logic of the state seems axiomatic – the experience profoundly altered Graeber. Experiencing that another way of organising society was possible, beyond the constraints of the nation-state, radically expanded his political horizons, in particular his belief in the viability of anarchism. As Graeber himself put it: “Anarchism and anthropology go well together because anthropologists know that a society without a state is possible because so many exist.”

Having come to understand just how feasible anarchism as an ideology really is, on returning to the university, Graeber used this experience to ‘anarchise’ his field of study.

His book, Fragments of an Anarchist Anthropology laid the foundation for a school of anarchist anthropology, arguing that the subject is “particularly well positioned” as an academic discipline to look at the gamut of human societies and organisations, to study, analyse and catalogue alternative social and economic structures around the world, and most importantly, to present these alternatives to the world. While his books Direct Action and  Possibilities: Essays on Hierarchy, Rebellion, and Desire provided the tools and resources for a new generation of activists and academics to study social movements not merely from the sidelines, but as active participants within them.

For Graeber, the relationship between politics and academia was a symbiotic one. His anthropological research enabled him to realise the possibilities of anarchism; while his anarchism gave anthropology the framework to channel its emancipatory and anti-authoritarian potential.

Graeber’s writing was a way of synthesising his activism and anthropology into a theory of anarchism and sharing it with the world. While his work throughout the 2000s garnered him a relatively small but faithful following, it wasn’t until the last decade of his life, when Graeber started to write broader, less explicitly anthropological texts that he became a respected and influential public intellectual.

His book Debt: the First 5000 Years, published in 2011, became an international bestseller, catapulting him into the political mainstream. Meanwhile, On the Phenomenon of Bullshit Jobs, the essay he wrote for Strike! magazine, a small anarchist publication, in 2013, which addressed the – up to then – unspoken futility of much of contemporary work, was an unexpected viral hit, receiving more than one million hits, and leaving Graeber inundated with hundreds of emails from people who recognised their own experience in what he described. Not only did the piece cement his place in the political mainstream, perhaps even more importantly, it demonstrated his ability to intuitively understand, and give voice to, ordinary people who face routine exploitation under capitalism.

Both works showcased Graeber’s remarkable ability to lucidly and clearly expose the absurdity of commonly held social myths, while casually offering up anarchist politics as a viable, common-sense alternative. For example, in Debt, Graeber shows us the farcical nature of debt as a financial system by tracing its role throughout history and illustrating the negative impacts it has had on social life. In response, he proposes it be replaced by “everyday communism”, acts of mutual aid in everyday human life, which he again traces throughout history as evidence of humans’ propensity to organise themselves around principles of cooperation rather than self-interest.

“He calls attention to actually existing communism. The kindness, and the cooperation, and the solidarity, and the mutual aid in everyday relationships.” @astradisastra on the late David Graeber

This rare ability to translate complex political ideas into fun, easy to read terms helps to explain how an uncompromising radical like Graeber managed to gain and sustain mainstream appeal. His working-class background instilled in him a hatred of elitism and with it a desire for his work to be enjoyed outside of the academy. For him, his writing was “an extension of his politics”, an act of care extended to his reader.

Like anarchist public intellectuals before him, such as Paul Goodman, Noam Chomsky, Alex Comfort and Colin Ward, Graeber succeeded in getting people to think like an anarchist, without even realising it. Together, they introduced anarchist principles such as mutual aid, voluntary association and community-led social organisation into the mainstream political discourse in a way that made them seem not just realistic, but commonsensical.

If Graeber’s activism got people behaving anarchically, his social critiques got people thinking that way. It’s an achievement only a handful of anarchists throughout history can lay claim to – and one that made him, unquestionably, the most prolific anarchist of the 21st century.

A legacy of hope.

Graeber left us far too early. It’s a tragedy to think that he won’t be here to help us make sense of the immense political challenges that lie ahead; a Chomskian figure still providing hope and roadmaps for change well into his nineties.

That said, the legacy he has gifted us is rich with ideas and practical examples that will allow us to continue his project of building a better, fairer, more enjoyable world.

“Play is the ultimate expression of freedom for its own sake.”

Graeber’s understanding of and contributions to modern anarchism reinvigorated the ideology, and will be a point of reference for generations to come. His active participation in activism shaped contemporary social movements and inspired a generation of activists. While his ability to live out his political values, instead of confining them to the pages of (his) books, made him not only a remarkable academic, but a remarkable human. 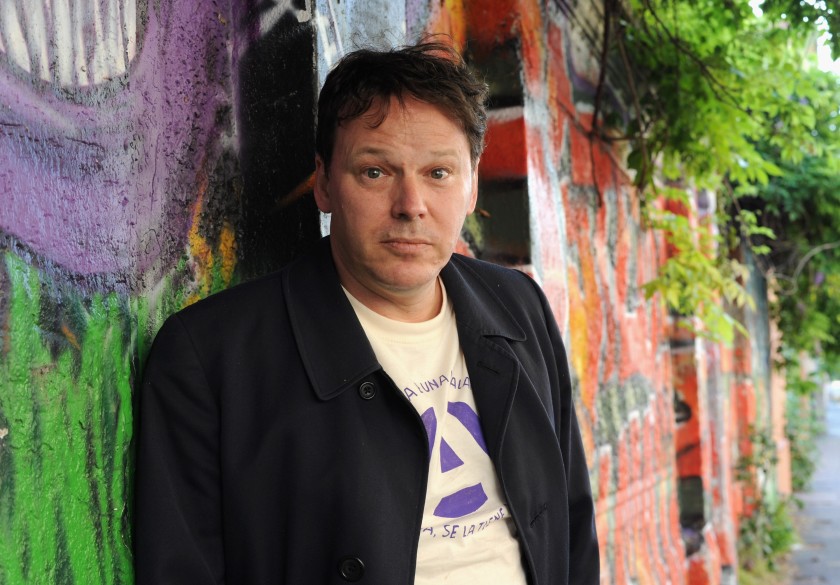 Graeber’s practice-based anarchism was ultimately rooted in hope – in the belief that you could remake the world at any given moment. He trusted that if provided with the right tools and resources, people had the ability to make their own decisions about how we should live.

Through his anarchism, Graeber showed us not only that another world is possible, but that it’s possible right now. He lives on in those moments and movements that show us even the smallest glimpses of such a world.

Shane Little is an anarchist and historian at Loughborough University.

This is the third instalment in our series exploring the life and ideas of David Graeber on the first anniversary of his death.

Opinion: Sex Work Is Not a Bullshit Job

When so many jobs exist solely to rationalise capitalism – as the late David Graeber’s thesis argues – sex workers respond to a real demand. Simply trying to end that demand is flawed, writes Marin Scarlett in our series exploring the life and ideas of Graeber on the first anniversary of his death.

Novara Media would likely not exist without anthropologist and activist David Graeber, who died on Wednesday. He helped give us the confidence to start out, and the conviction that left media – and especially left media that is able to think for itself – actually matters, writes James Butler.