An Ageing Society is As Big an Issue As Climate Change

Until there is a meaningful political alternative, the working-class can expect to pay more tax, work for longer and retire with less.

As with so much in Britain, from housing to high streets, adult social care is at breaking point – and things are set to get even worse.

The principal reason for this is simple: we are getting older. While disability accounts for a significant proportion of adult social care spending, more than half goes on people over 65. In the coming decades, as people live longer and have fewer children, this figure will steadily rise. Yesterday’s government announcement, of increasing national insurance contributions (NICs) to boost the NHS and adult social care, will barely scratch the surface.

In addition to posing a challenge to social care provision, ageing will disrupt our economic model. As it stands, a constant flow of young workers is just as vital to growth as fossil fuels. Until recently both were taken for granted, presumed to be ceaseless inputs for a system whose central idea is infinite expansion.

It’s no surprise, then, that the idea of a permanently expanding population first emerged alongside similar expectations for the economy. In the final decades of the 18th century, as industrial modernity began to take off – think Watt’s steam engine and the publication of Adam Smith’s Wealth of Nations – humanity was approaching one billion, leading to the gloomy forecasts of Thomas Malthus. Today that figure is just short of eight billion and still increasing, yet it will likely peak at around 10 billion some time this century before starting to fall, confounding now centuries-old screeds regarding overpopulation. With that climax now in view, it is increasingly clear that cohorts of new, young workers – like nature itself – are a finite resource. As a consequence, demographic ageing now poses as great a challenge to our economic model, at least in the short term, as climate change.

A world where grandparents outnumber grandchildren.

In 2018, for the first time in history, there were more people in the world over 65 than under five. By 2050, over 65s will outnumber under 14s. In Britain, this group is set to increase by 40% between 2016 and 2036, while those over 80 will double. These are seismic shifts arriving far sooner than you might glean from the political conversation.

So while the leading causes of death a century ago were primarily infection – think pneumonia, influenza or tuberculosis – today they are overwhelmingly age-related, with cancer, dementia and heart disease most likely to land the fatal blow. This will intensify further in the coming years – indeed dementia is already the leading cause of death in the UK – but rather than succumbing to these conditions, people will increasingly survive or live with them.

The relationship between ageing and age-related conditions is exponential rather than linear, meaning the social costs of ageing are far greater than even pessimists might first presume. The chances of suffering from Alzheimer’s roughly doubles between the ages of 70 and 75, doubling again between 75 and 80 and so on. For progressively older societies, with ever-larger concentrations of the ‘oldest old’, this presents a major challenge. Even if we mitigate or potentially cure things like cancer, the sheer accumulation of conditions may prove too much to manage. One response is the idea that we should treat ageing itself like a disease. Another, which is far more reasonable given the state of medical knowledge, is to accept that spending on health and social care must dramatically expand, with the care sector in particular re-modelled along the lines of the NHS.

Elderly care is a global crisis.

Simultaneous with rising care needs, and their costs, will be a comparative shrinking of the working-age population. Today, across the planet, there are 6.3 people of working age for every person over 65. The United Nations claims that figure will fall to 3.4 by 2050, and 2.4 by 2100. A population plateau, at the same time that social care needs significantly increase, would inevitably mean an economic and social catastrophe. This will hit wealthier countries first, but such trends are global. If the political reflex to demographic ageing is simply to call for more immigration then a retort should be offered: if you expect east Asians and eastern Europeans to care for you today, then who will care for them tomorrow?

Add to all this the prospect of ageing societies experiencing a combination of permanently lower growth and higher government debt, as they borrow more to pay for health and social care. A 2016 report by Standard and Poor claimed 25% of all countries could see their sovereign debt status reduced to “junk” – essentially meaning their likelihood of default is far higher – as a result of ageing by 2050. In this scenario countries like Brazil, China, Japan, Russia and Saudi Arabia could see public debt rise as high as 250% of GDP three decades from now.

In Britain, just the costs of health and long-term social care, the state pension, and other elderly benefits, are expected to increase annual spending by 2.5% of GDP every year this decade. All else being equal, rising health and social care costs would see public debt rise to 233% of GDP by the 2060s. That is unlikely, of course, because pensions will be reduced, retirement ages raised and, as we saw yesterday, taxes increased. In the absence of a meaningful political alternative, all of this is inevitable and it will fall hardest on the working class. 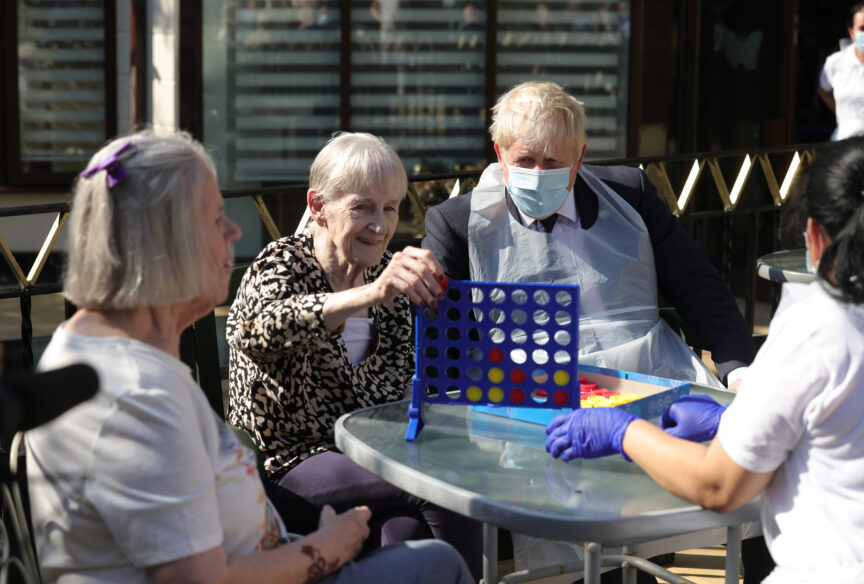 And yet despite clear evidence that all of this awaits us, the political conversation around ageing – as the media coverage of the government’s proposals reminds us – remains ill-informed and myopic. While Boris Johnson has at least conceded the need for more funding around social care, many Conservatives still seem to think they can address climate change, the housing crisis, ageing and regional inequality without spending any money. The orthodoxy of low-tax, small state libertarianism failed dismally when faced with the pandemic, something likely to be repeated over the coming years with other civilisational challenges. Faced with the reality of the 21st century, from rising temperatures to automation, free-market conservatism is as useless as it is puritanical.

Labour is attacking the Tories from the right. The leadership is really beyond a joke at this point. pic.twitter.com/p1BkFZinJQ

Yet more disappointing is how Labour, apart from Andy Burnham and Jeremy Corbyn, appear to have no proposals of their own. An increase to NICs is the wrong way to fund social care, being both inadequate and regressive. Yet rather than argue for an alternative, the opposition’s priority is to bash the government for no longer being a “low tax” party. For all Starmer’s flamboyant rhetoric of not “playing politics”, he seems capable of little else.

Most troubling of all is how elderly care and pensions can’t be addressed without also confronting the housing crisis and inequality – yet the government’s latest proposals entrench both.

Generally speaking, a pension equivalent to 50% of one’s final salary is viewed as a decent target. That presumes, however, that the retiree owns their home, with a figure of 70% more appropriate for those who rent. Given working-age adults are three times more likely to rent than 20 years ago – and a third of people over 60 are expected to rent by 2040 – this would indicate major problems ahead. Generation(s) rent, who have lower savings and no assets, will need more money than homeowners as they reach old age. Right now the economy is set up so the opposite is true.

Britain’s is a system where asset ownership pays towards the costs of old age. Yet today’s working-age adults are increasingly likely to pass value on to landlords. This isn’t because they are lazy or spend too much on avocados, but because house prices have detached from average wages since the late 1990s – an issue where both major parties have been complicit when in power.

How fair (+) or unfair (-) each age group thinks it is on people like them to raise National Insurance to pay for NHS and social care (net figures):

If you want to understand the electoral logic behind Johnson’s decision to increase national insurance it is this: affluent Tory voters would sooner someone earning £20,000 pay an extra £130 a year towards social care than spend more of their housing equity on care. Unsurprisingly, those most enthusiastic about increasing taxes on the working-age population are retirees. For now, and probably the rest of this decade, such a solipsistic logic is in the driving seat of British politics, particularly given the absence of any meaningful opposition.

Asset inheritance, and passing on wealth to your children, is not only a central part of Tory folk politics but, in an era of economic inertia, the primary means by which the middle class can reproduce itself. Yet demographic ageing, like climate change and Covid, is simply too big an issue to subordinate to political expediency. Failure to address it will lead to profound long term consequences, from even greater economic malaise to slumping consent for our political system. Pretending otherwise will prove as effective as wishing away the existence of a deadly pathogen.

Opinion: The National Insurance Hike is Class Warfare. Why Won’t Labour Say So?

This mask-off moment is an opportunity for Labour to dispel the myth of the Tories as the party of workers. Instead all we're getting are mealy-mouthed, half-hearted critiques, argues James Meadway.

The Bastani Factor: The 21st Century Crisis Nobody Talks About: Demographic Ageing

Humanity is getting older. But while the old outnumbering the young is one of the supreme achievements of our species, it comes with major challenges. Aaron Bastani on a crisis set to re-define societies around the world which, for the 21st century at least, is every bit as disruptive as climate change.