The Inside Story of Keir Starmer’s Farcical Diversity Audit

Equality as a corporate buzzword.

The eruption of Black Lives Matter in 2020 presented Keir Starmer with a dilemma. Appeal to Tory voters with a crusade against wokeness, and he risked losing Labour’s young, diverse voting base. Tack hard towards BLM, and his appeal as a voice of post-Corbyn moderation would be undermined.

In this context, Starmer opted to publicly oppose BLM whilst offering a fig leaf to his anti-racist critics inside the party: a ‘diversity’ campaign ostensibly aimed at ensuring a non-discriminatory culture at Labour’s Southside headquarters.

Over the following year, Labour party insiders exclusively reveal to Novara Media, the diversity project has been used as a Trojan horse to weaken unionisation, casualise staff, and protect the leadership from internal opponents. The ongoing charade offers a case study in the ham-fisted corporate management that has defined the Starmer project.

The Labour party has never been a particularly inclusive environment. Not a single one of its executive directors is BAME, its regional directors are disproportionately white, and among the dozens of staffers initially hired to work in Starmer’s office, only one was black. Personnel decisions are highly politicised – which often means dispensing with the principles of affirmative action. In spring last year, the leaked report on antisemitism in the party showed that senior officials routinely made racist and sexist remarks about their colleagues. 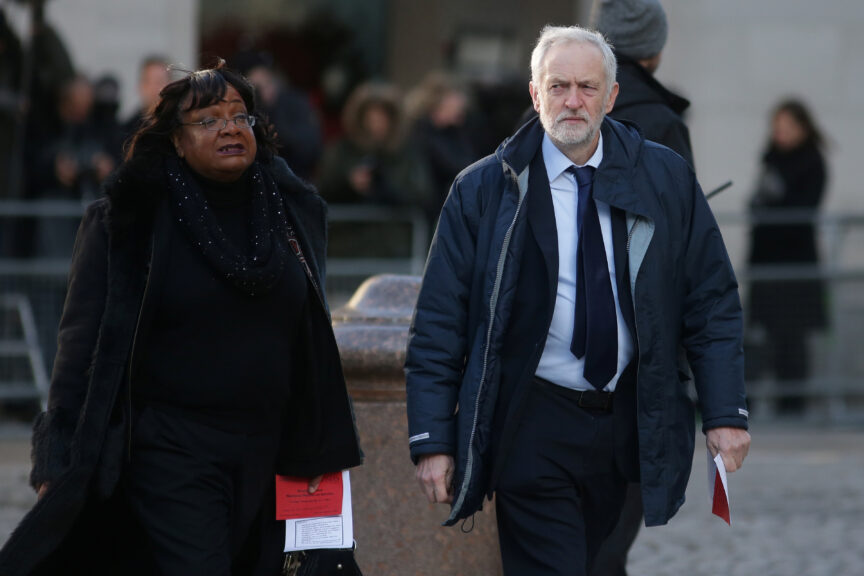 Starmer, aware that overt prejudice is a bad look in 2021, enlisted his deputy chief of staff, the former civil servant Helene Reardon-Bond, to lead his organisational ‘diversity’ effort. Its primary vehicle is the new Diversity and Inclusion board (D&I), made up of figures from the party’s senior management team and advised by onetime Pfizer lobbyist John Lehal. Its activities include organising unconscious bias training, distributing diversity surveys and liaising with a series of ‘staff networks’ established as part of the same initiative: the Women’s, LGBT, Disabled and BAME networks.

Most employees at Southside would welcome any step toward redressing inequality within the party, and some have spoken approvingly of Reardon-Bond’s initiative. “Helene was appointed by Jeremy Corbyn because of her work in the Women and Equalities department”, said a source close to her, “and she is one of the only people who has supported me and other BAME staff.” Yet the board has been controversial from the outset. Another official who worked with the D&I had no illusions about its purpose. “It was a form of proactive damage limitation,” they said. “It was set up as a front because the organisation was so clearly lacking in genuine diversity and inclusion. It gave management an excuse – something to point to – if they were ever accused of being unrepresentative.”

The BAME network stands up to the leadership.

The women’s, LGBT and disabled staff networks are dominated by the right of the party, and have been largely reluctant to challenge the leadership. But the BAME Network proved an exception. Shortly after it was convened, its members wrote to David Evans about the leaked Labour report, asking why there had been no repercussions for the racism it exposed, and when they could expect to see the findings of the Forde Inquiry (set up to scrutinise the leaks). Evans ignored their questions and sent back what one employee described as a “hopeless response,” informing them that the Inquiry had been indefinitely delayed. Since then, its scope has been restricted so that it will no longer focus on the allegations of racism against senior staffers, who were readmitted to the party after a brief suspension. Southside sources report that the Labour finance official Simon Mills – who was himself quoted in the report as calling a female staffer a “fuckwit” – has been given the authority to sign off on the Forde Panel’s recommendations, although Starmer’s office denies this claim.

BAME workers have also highlighted management’s racialised double standards in dealing with disciplinary cases. In summer 2020, a black member of staff used his personal Twitter account to argue that the party should be more supportive of BLM. The next day he was suspended pending investigation. When he eventually returned to Southside, he was transferred to a different department and told he would be working on “less sensitive issues”. Meanwhile, Teddy Ryan – a white staffer who was shown by the leaked report to have made abusive comments about the black MP Clive Lewis – faced no sanctions. To the dismay of some of his Southside colleagues, he was appointed as a representative to the D&I board.

Since the start of Starmer’s leadership, BAME workers have repeatedly raised questions about the party’s institutional hierarchy of racism. Staff in the Governance and Legal Unit (GLU), for instance, were reportedly told to be more aggressive in dealing with antisemitism complaints than with other forms of discrimination. A number of sources told Novara Media how party management has been particularly dismissive of concerns about Islamophobia, refusing to implement mandatory training programmes equivalent to those which exist for antisemitism. In spring 2021, while GLU was processing a complaint against Trevor Phillips – the broadcaster who famously referred to British Muslims as a “nation within a nation” – management intervened to prevent one of the only Muslim staffers in the department from working on the case (whereupon Phillips was summarily readmitted by a white GLU official). The incident was raised at the D&I, but – again – no action was taken.

Tensions between the BAME Network and management came to a head last May, when the Israeli government launched its latest round of airstrikes on Gaza and attacked worshippers in Jerusalem’s al-Aqsa mosque. Muslim staff members met with the D&I to discuss the atmosphere in Southside. They told Reardon-Bond that, given the countless people who had been suspended for expressing solidarity with Palestine, employees feared that their jobs could be endangered if they shared their views. Rather than offering reassurance, the deputy chief of staff became “extremely irate,” according to a source present at the meeting, and sent the staffers packing without addressing their concerns.

A former Southside staffer put it bluntly: “Being brown makes you untrustworthy in the eyes of the general secretary’s office. I can’t remember a single point the BAME Network raised that they addressed.” Over the past year, the Network has tried persistently to gain access to data on the recruitment, retention and progression of BAME staff within the party, but management continues to stonewall these requests. It has also pointed out that, despite the recommendations of its own internal reviews, Labour still lacks adequate equalities monitoring practices and diversity targets. Many staffers have accepted that none will be forthcoming under Starmer’s leadership.

One former staffer told Novara media that “Reardon-Bond’s basic role is to soften the hard edge of the Starmer–Evans project with this diversity drive” (though this view was contested by another BAME official, who replied that it “wrongly makes her the fall guy for Keir Starmer and David Evans’ failures on diversity and let’s them off the hook.”)

The diversity board has been equally useful to empower management at the expense of workers within the party. Previously, Labour staff would have dealt with workplace discrimination through their union branches. But the D&I has enabled the general secretary’s office to bring such complaints under its purview. “The staff networks are doing the work that Unite would usually do,” said one employee, “but it’s been fragmented and brought under the control of senior management.” Another told Novara Media that the initiative was “designed to cut unions out of the consultation process”. Now, when Unite or GMB members raise equalities issues with their bosses, they are invariably told that “these should be discussed by the board”.

The party’s recent personnel decisions have accelerated these tendencies. Hot on the heels of his decision to abolish the Community Organising Unit (almost entirely staffed by BAME people), Starmer’s mass redundancy programme has disproportionately affected women and minorities. Under pressure from the Unite branch, management reluctantly agreed to undertake an equalities impact assessment to measure the effects of the lay-offs. But now that the severance packages have been signed-off, the party is refusing to publish the results of the survey – since they would reveal the extent to which the D&I has failed on its own terms.

Last month, Labour took the similar step of withholding its gender pay gap report (in contravention of equalities law). Management cited administrative problems, but Southside employees told a different story. According to multiple sources, the HR department was fully capable of filing the audit on time, having recruited a new staff member and gained resources amid cutbacks in the rest of the organisation. The decision to bury it was, they asserted, a deliberate attempt to hide the unequal impact of the lay-offs. When the report was finally published in early November, its data was taken from a ‘snapshot date’ prior to the restructuring.

Of course, the redundancies themselves are part of a wider project to reform Labour’s working conditions. Starmer and Evans plan to adopt a so-called hub-and-spoke paradigm in which, rather than overseeing a large team of permanent employees, management will streamline the organisation – hiring an increasing number of staff on flexible short-term contracts as the election cycle nears its end. In practice, this means transitioning to a precarious employment model which is intrinsically opposed to the ‘diversity and inclusion’ agenda: structuring the party around insecure, temporary working arrangements, and increasing management’s ability to terminate the contracts of political opponents.

The ineluctable conclusion is this: to the Labour leadership, equality is just a corporate buzzword. Both its external policies and internal practices undermine any pretence to anti-racism or anti-sexism. As one source who worked for the BAME network commented, the D&I board is “emblematic of the leadership in general: a series of performative, empty gestures” intended to create the impression of a culture change, “while the material issues that affect workers – especially BAME ones – are ignored if not exacerbated.”

Oliver Eagleton is an editor at New Left Review. His first book, The Starmer Project, will be published with Verso in April 2022.

Rulebook-burning, a leftist purge plus a mayoral candidate nobody wants to campaign for have produced disaffection and despondency. We don't need a crystal ball to see what the future holds for Keir Starmer - it's happening right now in Bristol.

Opinion: No Other Minority: Keir Starmer’s Silence on the Islamophobia Report Speaks Volumes About Labour’s Hierarchy of Racism

Labour’s Islamophobia report rubbishes the claim that “no other minority” would be treated so poorly as the Jewish community was by the party, writes Ash Sarkar. Keir Starmer's failure to address the report's contents speaks to a toxic hierarchy of racism within Labour, whereby communities are set into competition with one another to be heard.

Report: ‘It’s going to be a long night’ – How Members of Labour’s Senior Management Team Campaigned to Lose

A leaked report, seen by Novara Media, reveals the extent to which senior Labour figures sought to undermine their own party’s chances in the 2017 general election.