We, Goldsmiths Staff, Are Striking for the Future of Our Universities

Unelected managers, consultancies and banks are trying to gut Goldsmiths.

A Goldsmiths picket lining during the current strike. (Tom Trevatt)

Goldsmiths staff have begun one of the biggest strikes in recent university history. We are fighting the top-down destruction of higher education – universities have become cash-engines for consultants, senior managers, and landlords, with students and staff feeling the impact. The pedagogical, research and empowerment ideal of Higher Education has dissolved since 2010 in favour of managerial profiteering. What is taking place at Goldsmiths is an exemplar of this process.

The three weeks of continuous industrial action comes in response to a proposed restructuring that would see 52 academic and professional services jobs lost, and the university’s administration further centralised. After an unprecedented turnout of 70.2% in the ballot, 93.3% voted for action short of strike and 85.8% for strike action. Workers in Goldsmiths UCU, which has a membership of close to 1000, started strike action on Tuesday this week.

Look at the numbers for our solidarity rally! This is not a normal strike. @GoldsmithsUoL management has bitten off more than it can chew. We demand #NoJobCuts! #Goldstrike pic.twitter.com/KTbYOwaUoE

Goldsmiths had been an outlier in avoiding the most extreme forms of marketisation that have afflicted UK universities – thanks to a strong union, an active student body and a sustained period of growth that allowed it to function for a while without chasing the bottom line. This ended in 2019 when Goldsmiths ran a deficit after over-estimating its recruitment targets and appointed a new warden, Frances Corner.

Corner was recruited from the University of the Arts London conglomerate that had carried out its own brutal restructuring a decade earlier. Her skill lies in wrapping managerial ruthlessness in progressive language. This became evident with the unveiling of her “vision” for “Evolving Goldsmiths”, purportedly aimed at “securing our legacy as a beacon of progressive, critical thought and in the vanguard of social justice”. In reality it entailed a tired formula of centralising professional services, cutting academic posts, axing unprofitable courses, and recruiting more highly-paid managerial staff.

Despite enormous opposition to the reforms, including an unprecedented vote of no confidence in the entire senior management team, Corner has pushed ahead with her “vision”. The current strike is, above anything else, a fight over the governance of the university. 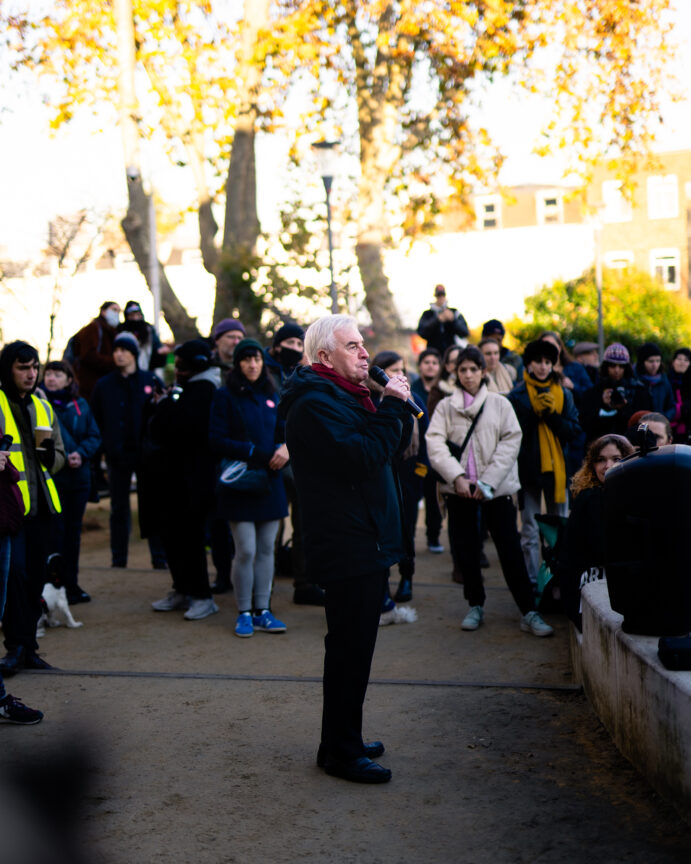 Underlying the Goldsmiths dispute is the broader problem of how universities are run, and by whom. Specialist managers move from institution to institution, partnering with expensive consultants to impose chaotic restructurings. With no stake in the university, its students, or staff, they move on before their disruptions are even complete. Several members of Goldsmith’s senior management team have left since the restructuring programme began, including its chief operating officer, director of human resources, and interim chief financial officer. Meanwhile, a management “change lead” is being employed at great expense. Students and staff have no control over this.

On paper, the university looks like a democratic organisation. A body called Council supposedly acts as trustee and custodian of the university’s pedagogical, research and financial health. However, Council is increasingly packed with consultants, accountants, and business managers. While elected staff and student representatives sit on Council, they are massively outnumbered by these unelected members. Independent Council members engage only superficially with the vast amount of documentation they are sent. Their main role is to provide approval of the senior managers’ proposals, despite staff and student opposition. Few people can remember a time when Council refused to back the managers.

The justification for this overabundance of business and finance experts on Council is that they provide the know-how the academic community lacks and ensure the university’s stability through scrupulous oversight of its accounts and its financial strategy. This is, at best, wishful thinking. Members of council were unable to avert a deficit at Goldsmiths and their strategies for a turn-around have largely consisted of hiring ever-more expensive consultants and eliminating front-line staff.

Despite the mantra of “income diversification”, over 70% of Goldsmiths’ income remains tied to fees, so this strategy is risky. Hiring fewer student-facing staff makes it harder to run courses and threatens a further loss of student income. Equally risky is management’s plan to create a “common curriculum”, where department-specific subjects are replaced with generic skills modules. This is supposed to provide a solution to Goldsmith’s financial conundrum, but it could instead further impoverish teaching and learning.

The shadow of finance capital. 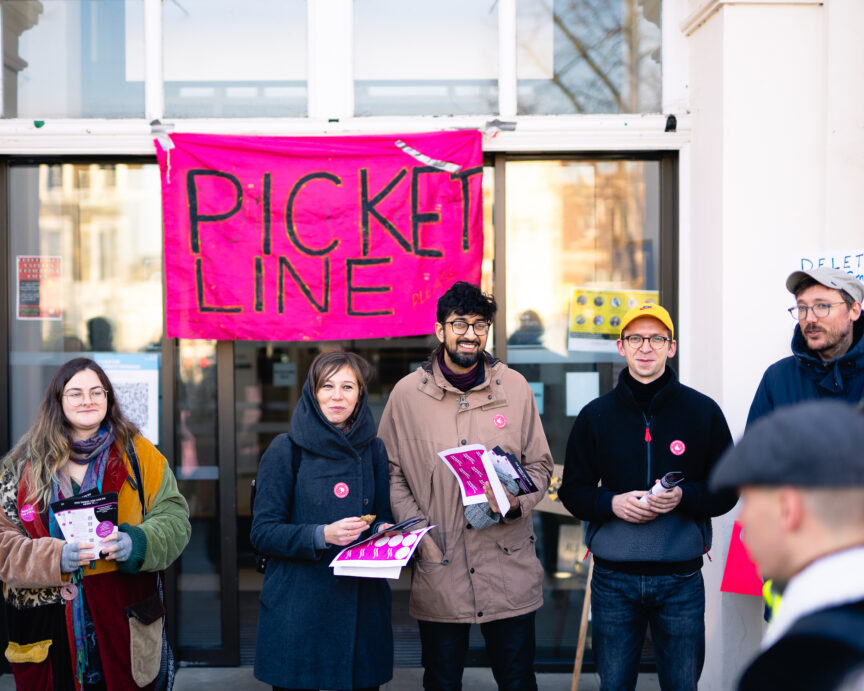 The university’s current financial situation was entirely avoidable. Back in the summer of 2020, Goldsmiths UCU asked the senior management to dispose of some underused real estate to regain sustainable cash reserves. Instead, Council allowed them to sit on these resources while negotiating new and extremely disadvantageous deals with NatWest and Lloyds, their so-called banking partners. Goldsmiths agreed with the banks to consolidate past loans and take out an extra temporary credit facility. But that only came on the condition of harsh cuts that threaten whole departments (including history, and English and creative writing). Further cuts lie ahead. This makes no business sense, and certainly no educational sense. So, why is it happening?

Governance at Goldsmiths has become so obscure that providing an answer is difficult – but some things are particularly worrying. Goldsmiths commissioned KPMG to produce three business ‘reviews’, as demanded by its bankers. Despite repeated requests, we have not been told how much Goldsmiths paid KPMG for these reviews. Lynn Pearcy, Council member and chair of the Finance and Resources Committee, worked for 34 years at KPMG before retiring in 2015.

Consultancy fees have also gone to other companies with direct links to members of the Council, but this might not even be the biggest problem. Since the Cameron-Clegg coalition government accelerated the marketization of UK higher education, a new class of managers has expanded with little oversight – while educational provision has suffered repeated cuts. The regulatory body, the so-called Office for Students, has fuelled this trend. Organisations like Advance HE, largely made up of vice-chancellors and their teams, now claim to represent the “student voice”.

While the mainstream press has highlighted the eye-watering salaries of vice-chancellors, less attention has been paid to this growing layer of managerial professionals who are increasingly turning universities into undemocratic institutions and directing institutional efforts towards their own self-preservation. Our students deserve better than seeing their debt prop up these predatory interests and the financial system they are part of. This is why we are striking.

‘It Felt Beautiful and Precious’: Reflections on the Student Movement 10 Years On

Today marks a decade since students faced police horse charges in Parliament Square before being kettled into the night on Westminster Bridge. The 2010 student movement radicalised thousands of students in defence of public education. Matt Myers speaks to two former students about how the movement impacted their politics and lives.

"The idea that we just tolerate a managed decline because we can’t expect any better has just been entirely rejected." Jo Grady, an outsider, rank-and-file candidate, has achieved an unprecedented landslide in the UCU general secretary race. Craig Gent caught up with her at the union's annual congress.

#NovaraFM: Failure of the 2010 UK Student Movement: A Diagnosis

This week's show asks why the UK student movement of 2010 proved incapable of enduring after the passage of the Higher Education Bill into law.