Half of US States Could Be About to Ban Abortion

Roe v Wade is under attack.

The Americas are going in two different directions on abortion. Last year Argentina joined Uruguay and Guyana in legalising abortion up to 14 weeks. The Mexican supreme court decriminalised abortion across the country in September. But just across the border in Texas, abortion after six weeks is now illegal, with the blessings of the US supreme court. And now that court has taken up a Mississippi law that bans abortion at 15 weeks.

The court’s decision is not expected until summer, but a hearing on 1 December gave warning that the court’s rightwing majority will permit US states to ban abortion. If that happens, around 20 states already have bans waiting, and more are expected to follow, leaving half of the US with no legal abortion for the first time since 1973.

We’ve come to this extraordinary juncture even though, as Bernie Sanders noted after the hearing, there is no US state where more than 25% of the population wants abortion banned. Nationally, support for the right to abortion for any reason has risen in the last decade, with 33% favouring no restrictions, and another 29% favouring some restrictions. Only 11% believe it should be illegal in all cases.

As the Supreme Court today hears a case on Roe v. Wade, let me be very clear. It is a woman who has the right to control her own body, not the government. If men were the ones giving birth, I doubt that this would be in question.

With this popular mandate, Congress could override the court – but legislation is stalled. In September, the US House passed the Women’s Health Protection Act, which would safeguard abortion rights across the country. However, the undemocratic nature of the Senate has so far precluded action. Tiny Wyoming gets two votes, as does California, which has 67 times the population. Additionally, byzantine Senate filibuster rules require 60 out of 100 votes to move any legislation. These rules could be changed by the narrow Democratic majority, but the party can’t even keep its own senators on side – two are blocking the move currently – and there is no mechanism to discipline members. Voting rights and labour rights legislation are similarly blocked, which has created some momentum towards change.

A half-century of abortion.

In the capitalist world US feminists led the way on abortion rights, winning full abortion on demand until 24 weeks in New York state in 1970. That law became the model for the supreme court’s Roe v Wade decision in 1973. The case concerned a Texas woman who was forced to bear her third baby while her case went through the courts. The landmark ruling prohibited states from interfering with abortion rights before fetal ‘viability’, judged at the time to be around the end of the second trimester.

Roe v Wade turned out to be the high water mark for abortion rights in the US. By 1977 the government was denying abortion funding to those poor enough to receive Medicaid. Subsequent rulings allowed states to require teenagers to get parental consent, require waiting periods and ultrasounds for all abortions, and hit clinics with draconian regulations designed to put them out of business.

These restrictions have raised costs. An abortion in the US costs $530 on average, more than most people can come up with without borrowing or selling something. Very few people have abortion coverage through their health insurance.

So why all the fuss over Mississippi’s 15-week ban? After all, 88% of abortions in the US occur before 12 weeks.

The reason is largely technical. Roe and subsequent decisions, over the objections of feminists, made ‘viability’ the limit after which states could make abortion illegal, as long as provision was made for the health of the mother. The state of Mississippi is asking the court to scrap that standard, which would give lower courts leeway to approve stringent limits like Texas’ six-week ban.

Time limits have been part of the right’s strategy to force all women to bring their pregnancies to term. The more obstacles they erect – added costs, waiting periods, lengthy travel – the fewer people are able to abort within the time limit.

It wasn’t that long ago, in 2016, that the supreme court was still preventing egregious regulation of abortion clinics by Texas. But the composition of the nine member court has changed rapidly. Donald Trump appointed three new justices to join the three conservatives on the court, so it is now stacked with six anti-abortion ideologues.

In the hearing, the three remaining liberals were reduced to arguing that the court will lose legitimacy if it does a U-turn on abortion. Justice Sonia Sotomayor asked: “Will this institution survive the stench that this creates in the public perception that the constitution and its reading are just political acts?”

However, the only rightwinger who seems to care about maintaining the court’s legitimacy is Chief Justice John Roberts. During the hearing he tried to tether the rightwing of his court to the case before it – the 15 week ban – and divert them from completely reversing Roe. The five ideologues appeared unmoved.

Of course, feminists have not been quiet. The Women’s March, the organisation that led the largest protest in US history upon Trump’s inauguration, hosted ‘rallies for abortion justice’ in every state in early October. They urged a change to the Senate filibuster rule and passage of the Women’s Health Protection Act. 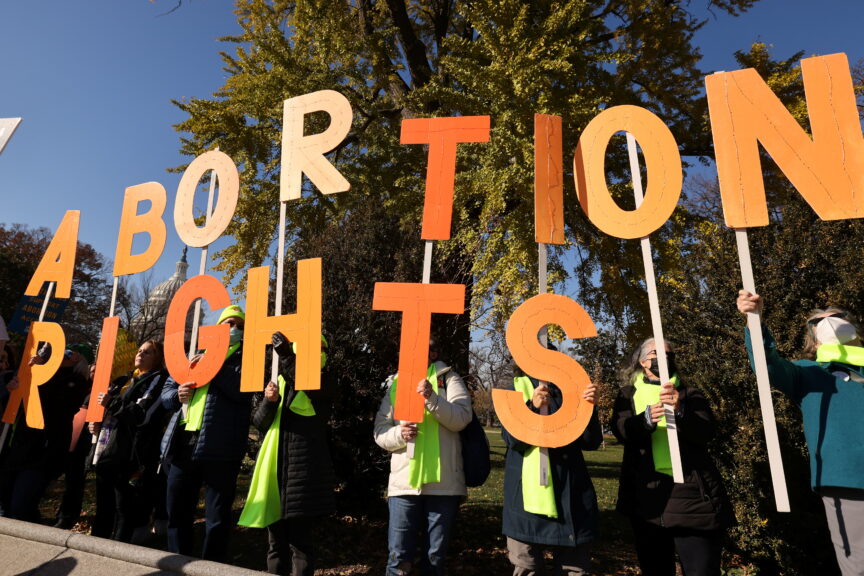 1 December saw a mobilisation around the supreme court building itself. The movement has become less shy about using the word abortion, arguing “abortion is essential”, while previous mobilisations were labeled “for women’s lives” or “pro-choice”. Organisers may have taken a lesson from the abortion rights campaign in Ireland, where breaking the taboo on the word ‘abortion’ was an important breakthrough on the road to repeal in 2018.

While the US supreme court is busy shutting down abortion options, Joe Biden’s administration may open them up. The US Food and Drug Administration (FDA) has heavily regulated the abortion drug mifepristone (Mifeprex) since it was introduced in 2000, requiring it be dispensed by clinicians in-person. The pandemic exposed the arbitrariness of these rules, and the FDA is now allowing mail-order abortion pills. This allows groups like Abortion on Demand to dispense pills along with telephone counseling in 20 US states. And now the FDA is considering making the change permanent. While many anti-abortion states have banned telemedicine abortion, in states where it is legal, pills by mail have drastically increased options and reduced prices (Abortion On Demand charges $239).

Meanwhile in Texas, where abortion is effectively illegal and telemedicine is banned, women are ordering abortion pills from Aid Access, an organisation set up by Dutch doctor Rebecca Gomperts. The pills come from India. Likewise, Texans near the Mexican border can buy misoprostol (Cytotec), the second medicine used in the standard abortion pill combination. Misoprostol is readily available in Mexican pharmacies and is 80% effective at inducing abortions when taken correctly in the first trimester. Already there are underground efforts to dispense both pills where necessary. So while the legal picture may be grim, medical and communications advances are allowing feminists to circumvent US anti-abortion laws while they pressure the government to provide rights to legal and free abortion.

Jenny Brown is an organiser with National Women’s Liberation and author of Without Apology: The Abortion Struggle Now and Birth Strike: The Hidden Fight Over Women’s Work.

Report: How We Won: The Ugandan Feminists Who Overturned an Anti-Porn Law

Ending a six-year battle, feminist campaigners in Uganda have overturned a law designed to criminalise pornography, but which ended up criminalising women’s sexuality. While this victory is undoubtedly important, there is a bigger war to be fought, they say.

Sex workers are mobilising against a controversial Labour bill, which proposes the UK adopts the 'Nordic Model' and criminalises buying sex. Such a move, they argue, would put their lives at greater risk. Sophie K Rosa reports.

On 25 May, Irish citizens will be given the chance to remove and replace the eighth amendment - the wording in their constitution which makes abortions illegal in the majority of circumstances. Here are three reasons the amendment must be repealed.