Is Britain Ready for the Omicron Variant?

It's going to be a difficult winter - but it's not all bad news.

It’s been just over a fortnight since the Omicron variant of Covid-19 was discovered in South Africa. The new variant – which some studies suggest has a higher risk of re-infection – has quickly dominated the headlines. Yet right now, we still know very little about it.

The World Health Organisation has said that there are “considerable uncertainties” about Omicron; we don’t yet know, for instance, that it’s definitely more vaccine-resistant than previous strains. In the absence of such knowledge, many governments have decided to respond quickly.

In the UK, Boris Johnson’s government has reintroduced compulsory mask-wearing, brought back a requirement to test and self-isolate for overseas arrivals, and is expanding ‘booster’ vaccinations to all adults. However, critics argue it isn’t doing enough to curtail the spread of the variant.

“It’s because of poor leadership”.

Pretty damning assessment of the UK’s response to the Omicron variant, from one of the Government’s own scientific advisers.

Should Omicron turn out to be more severe, is Britain ready to endure both the virus and the restrictions that come with it? After all, the UK’s Covid-19 rates remain among the highest in Europe – while its restrictions are among the laxest.

A difficult winter ahead.

It’s without a doubt that new variants of Covid-19 should worry us. The Independent’s science correspondent Samuel Lovett argued in a recent piece that “[they] pose the gravest of threats to the global vaccination programme” due to fears that the virus could evolve and reduce the effectiveness of vaccines.

This is of particular concern in the UK, where cases have been trending upwards for months. The seven-day average of daily cases has risen from 4,700 at the start of June to 42,000 as of last week – an increase that provides plenty of opportunities for new variants to circulate. 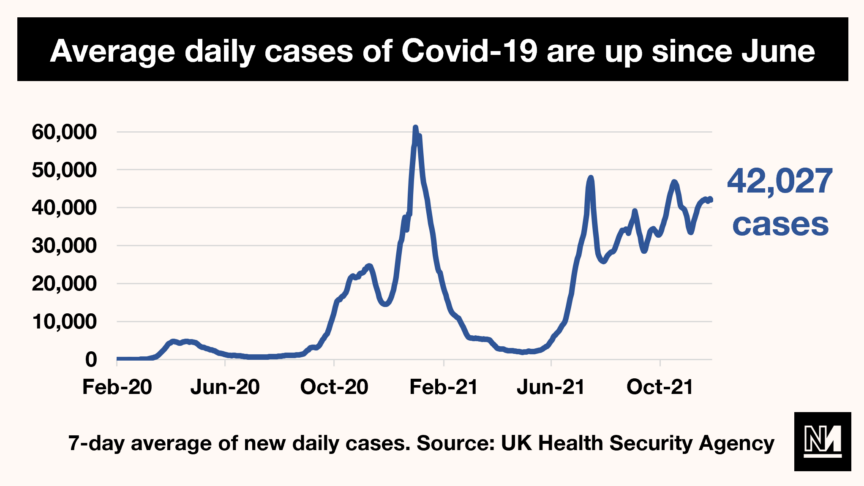 Despite the rising case numbers, the government has been reluctant to tighten restrictions. This has meant the UK has become increasingly distinct from other European countries in its approach, with Austria implementing a full lockdown in response to rising cases, and Germany going as far as to introduce restrictions on unvaccinated people.

At the same time, the NHS is struggling to deal with both expected winter pressures and rising Covid-19 cases. Chris Hopson, the CEO of NHS Providers, the membership organisation for NHS Trusts, warned last week that “the service is heading for the most difficult winter in its history.”

There are some indications, however, that Britain is well-prepared for the new variant. Although it is reasonable to worry about global vaccination rates, Britain’s own vaccination programme has thus far had a high uptake rate.

As of 1 December, over 80% of those aged 12 and above have already had two doses of a Covid-19 vaccine. This is notable for two reasons: firstly, because research shows that vaccines significantly reduce both the risk and impact of Covid-19; secondly, because the speed at which the vaccines were distributed demonstrates that, despite continued pressure, the NHS can swiftly and efficiently vaccinate a mass population.

Indeed, despite the booster shot programme starting less than 70 days ago, 36.4% of over-12s (20 million people) have already received their third dose. For comparison, just 7% of German adults have received a booster shot. 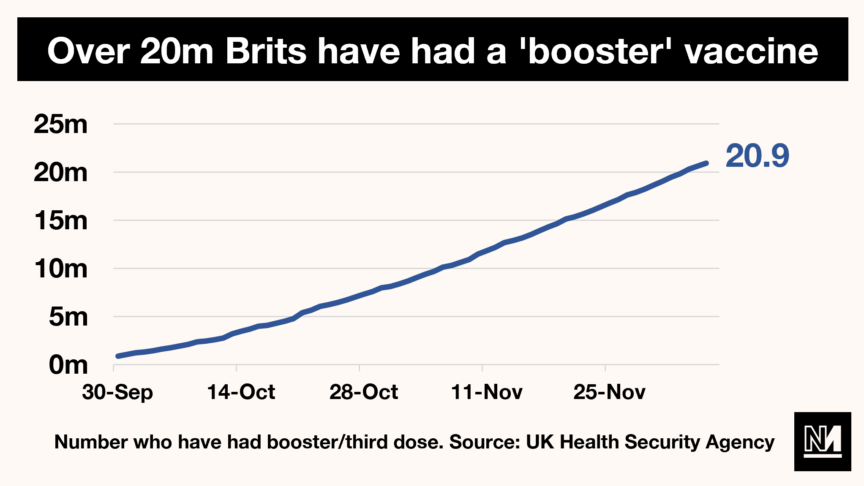 When it comes to the question of whether the public will take up the offer of a booster, the outcome again looks to be optimistic. Not only have eight out of ten eligible Brits already had both doses of the vaccine, polling in September indicated that 82% of fully vaccinated Brits would take a booster shot if it was offered to them.

The British public is against a full lockdown.

But while the public has shown an overwhelming openness to vaccines, the same can’t be said for potential restrictions. New polling from YouGov shows voters oppose adopting the sort of stringent measures that Britain has enforced in previous lockdowns: the ‘rule of six’ on outdoor gatherings, a ban on household mixing, a full lockdown, and closing pubs and restaurants are all opposed by large margins.

This stands in stark contrast to the public’s response in November 2020, when these sorts of measures were overwhelmingly embraced. Whilst it is possible that a worsening health crisis may shift public opinion, these numbers indicate a definite change from previous phases of the pandemic. 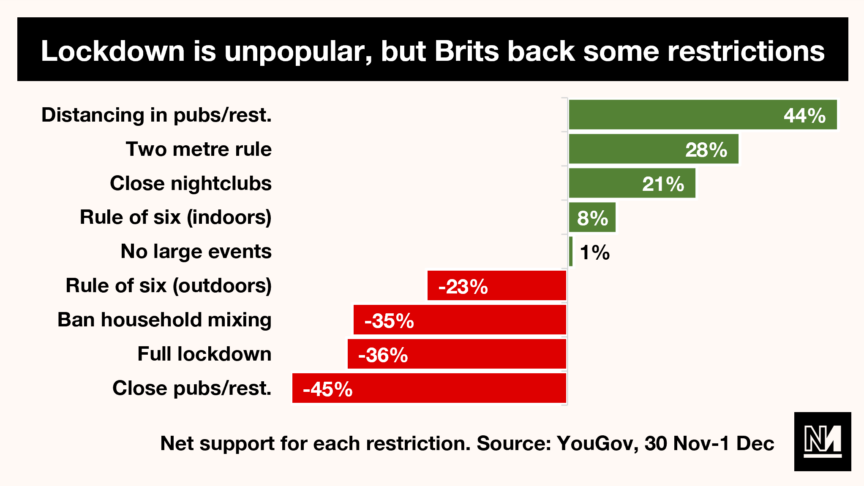 Despite this, voters have shown openness to accepting some restrictions. Well over 80% support mask-wearing requirements on public transport and in shops, and similar numbers back rolling out booster shots to all over-18s. At the same time, less stringent measures – such as the ‘two-metre’ rule, and applying the rule of six indoors – do have a considerable amount of support from voters.

Even if Omicron does prove to be as severe as some fear, the public has indicated it is willing to accept the government’s updated guidance and some further restrictions, even if it isn’t enthusiastic about the idea of harsher restrictions and another full lockdown.

The government must be prepared to act fast.

Yet we do still face one frustrating stumbling block in tackling the Omicron variant: the UK government’s own lack of political will and its ability to take big decisions swiftly. As we have already seen, it is very hesitant to reintroduce restrictions on people’s lives (especially after the cancellation of Christmas in 2020), instead focusing on booster shots as the route out of the crisis.

Johnson recently told people not to cancel Christmas parties or nativity plays – a stance some experts disagree with due to fears about Omicron. The former deputy chief medical officer for England, for instance, urged people not to socialise “when we don’t particularly need to”.

Overall, though, Britain’s prospects for dealing with Omicron look pretty good. Much of the British public is fully vaccinated, and those vaccines are doing their job in keeping hospitalisation rates much lower than they were in previous waves.

The NHS, meanwhile, has proven time and time again that it is capable of quickly distributing vaccines to the population – and is continuing to do so now. 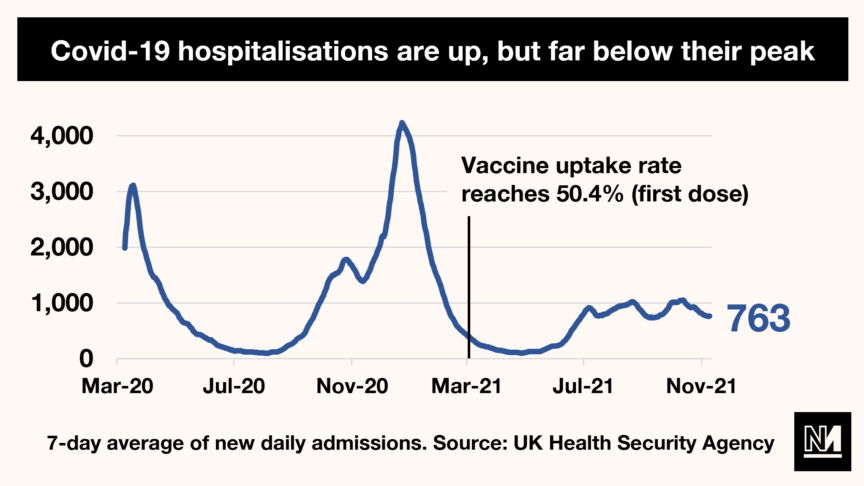 Whilst voters may be wary of another full lockdown, they have warmed to the new guidance on masks and are open to bringing back social distancing if necessary. They are also overwhelmingly willing to get a booster vaccine, which will be key in keeping cases and hospitalisations low.

As we head into Christmas 2021, there is reason to be optimistic. But a good outcome can only be achieved if the government takes bold and swift decisions – and if we as citizens continue to be careful.

Opinion: The Government’s New Depression Treatments Are a Scam

The Omicron variant is just the latest reminder that Covid-19 is here to stay. The left must strategise accordingly, writes James Meadway.

The development of Covid-19 vaccines was a huge boost for the pharmaceutical industry’s reputation. But the arrival of the Omicron variant makes it clearer than ever that a big pharma-led response to the pandemic won’t work, writes Tim Bierley.