First, Citizens Were Turned Into Immigrants. Now We’re Being Stripped of Political Rights

It’s time Britain stopped pretending to be a democracy.

Demonstrators gather outside the Home Office in protest at the Nationality and Borders Bill, November 2021. Hesther Ng/Reuters

The Nationality and Borders Bill, aimed at changing the asylum system, is the cornerstone of the government’s ‘New Plan for Immigration’. It passed its third and final reading in the House of Commons on 8 December, and will now go to the House of Lords in January 2022. As Lucy Mayblin suggests, many of its proposals are unworkable, and not many of them are new. Its primary aim seems to be “of appearing tough on unwanted migrants.”

There is something else that is highly significant, however – the bringing together of nationality (citizenship) and borders (immigration) in one bill.

I’m delighted that the #BordersBill, which will break the deadly business model of the people-smugglers, has passed in the House of Commons just now.

It will deliver a new, firm but fair asylum system to deter illegal migration.#NewPlanForImmigration🇬🇧 pic.twitter.com/Fxo7Q73ry2

Most discussions of citizenship associate it with the rise of the modern nation state and with suffrage. In this story, the state became democratic through the struggles for citizenship undertaken by working class men, women, and then others who had initially been excluded from political participation. In this way, citizenship is understood as a performative act, by those who were previously simply subject to its authority who claim the right to have rights.

This standard narrative doesn’t work in the context of Britain. When the first formal legislation for citizenship was introduced in 1948, Britain was not a nation state. It was an imperial state. As such, citizenship in Britain was established in relation to imperial concerns more than national ones. It was about reinforcing the symbolic power of empire. While its global reach was under challenge, it was not necessarily apparent at the time that the colonial world order was systematically being reconfigured through movements of decolonisation.

The 1948 British Nationality Act established an inclusive and expansive understanding of citizenship. British citizenship was conferred not only on the population within Britain, but also on the populations of her colonies. This was a common and shared citizenship under the title ‘citizen of the UK and its colonies’.

Why did Britain decide to grant citizenship – and its attendant rights to enter, live, and work in the country – to in excess of 800 million people? One reason is that up to this time, the dominant direction of travel was from Britain (and Europe) to the rest of the world. This was a movement of colonial dispossession, elimination and settlement with little regard for the norms and values of the populations already living in the lands that were settled.

Across the 19th century, for example, along with around 50 million other Europeans, 13.5 million British people moved across the globe to make lives and livelihoods for themselves on the lands of others. It was only when those others, seeking similar opportunities, made return journeys along these paths to Europe, that the global movement of populations began to be regarded as an affront within the metropoles.

This was despite the fact that those who moved – as ‘citizens of the UK and its colonies’ or as ‘Commonwealth citizens’ – did so in accordance with the laws of the state. The British Nationality Act may only have intended the extension of British citizenship to all those within its empire and its former empire as a symbolic act to shore up its sense of global significance; however, those who gained these rights, believed in them and pursued the opportunities they made available. For them, movement was a lawful right to be exercised. 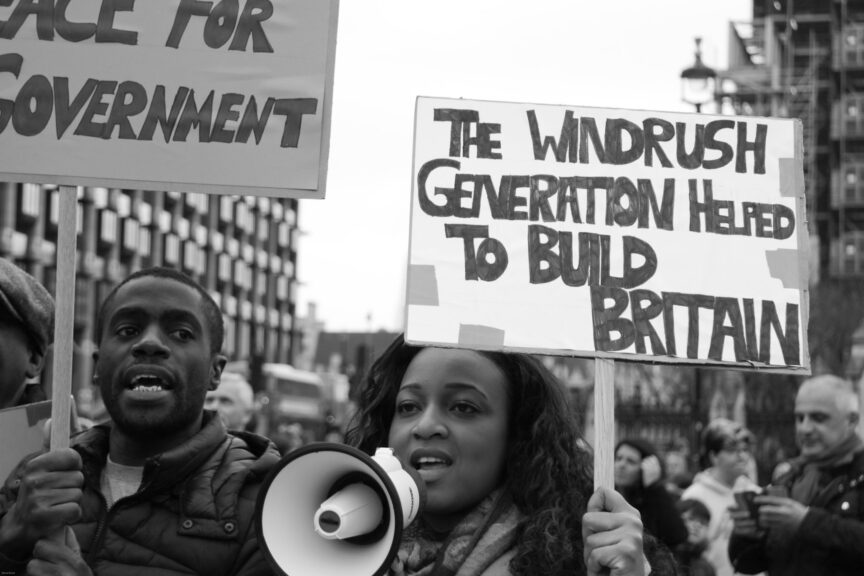 As the pace of what was called ‘coloured immigration’ into Britain grew, so did the moral panic and political concern about perceived changes that would follow. This was despite the fact that in the 30 years after the British Nationality Act came into force, more people were leaving Britain than entering it (with over a million going to Australia, for example, under the ten pound assisted passage scheme funded by the British and Australian governments). Even in this period, then, movement itself was not the issue – it was the colour of those moving to the formerly colonial metropoles that was seen to be problematic.

Having conferred a common citizenship to the populations of the metropole and its colonies, however, Britain could not easily revoke that citizenship or reconfigure it. It had to find another way to limit the movement of particular populations into the country. This was done through the establishment of the Commonwealth Immigration Acts of 1962, 1968 and 1971. In this way, immigration control came to be used to define who was and who was not able to take advantage of the citizenship rights they continued to hold.

As Rieko Karatani has set out, these acts turned citizens into immigrants. Or, at least, they sought to limit the citizenship rights of those outside of the UK, who were entitled to them, through racially discriminatory immigration legislation. It was not until the 1981 British Nationality Act, which replaced the earlier 1948 Act, that British citizenship itself was redefined to refer (almost) solely to Britain (and not its former empire).

From the hostile environment to the Windrush scandal to the stripping of citizenship from Shamima Begum and others, the state already has the power to strip citizens of their citizenship. The only change the new bill proposes is to be able to do so without informing the individual. That is, to remove democratic rights from individuals who are part of the political community.

The other thing that is different is that the section of the population to whom this applies now includes those who moved here from across the EU and their children. Those who hold dual citizenship with EU countries are now discovering that they are being caught up in the arrangements that had affected others during membership, but now also apply to them.

Once any government begins to remove rights from its citizens, those rights, for the rest of the population, are no longer rights, but privileges. Privileges given (and taken away) at the whim of arbitrary power. In the process, we all lose. The choice ahead is stark. We either see ourselves as a whole society organised in relation to democratic norms, or we give up the pretence of being a democracy.

Gurminder K Bhambra is a professor of postcolonial and decolonial studies at the University of Sussex.

Analysis: With the New Nationality Bill, the Border is Breathing Down Our Necks

The Tories’ Nationality and Borders Bill passed on Wednesday. Arianne Shahvisi reflects on how many Black and minority ethnic UK citizens are increasingly being given second-class status.

Opinion: Priti Patel Is Right About One Thing: Our Asylum System Is Fundamentally Broken

Without safe ways to come to the UK, migrants will keep drowning in the Channel, writes Zoe Gardner.

When we talk about breaking up Britain, we can’t just talk about the British state, argues Adam Ramsay. We also need to understand what gives the state its social license to operate: that is, British nationalism.