Between 1973-88, the ground-breaking Race Today journal was at the epicentre of the struggle for racial justice in Britain, highlighting the limitless opportunities and impacts campaigning journalism can have.

With the struggle against police racism and brutality currently happening across the world, it is vital that young activists learn about the recent history of Black Radicalism in Britain, including the Black Radical press, in order to harness the revolutionary potential of the media in the fight for racial justice.

Between 1973 and 1988, the Race Today journal and its collective of writers passionately fought police brutality, challenged racist institutions and, by adopting intersectional politics, linked the experiences of Black communities in Britain with other struggles to illustrate the interconnectedness of race, sex and class exploitation.

Under the controversial editorship of activist and former Black Panther Darcus Howe and, from 1985, his wife Leila Hassan, Race Today became a central voice for the anti-racist Black community in London. 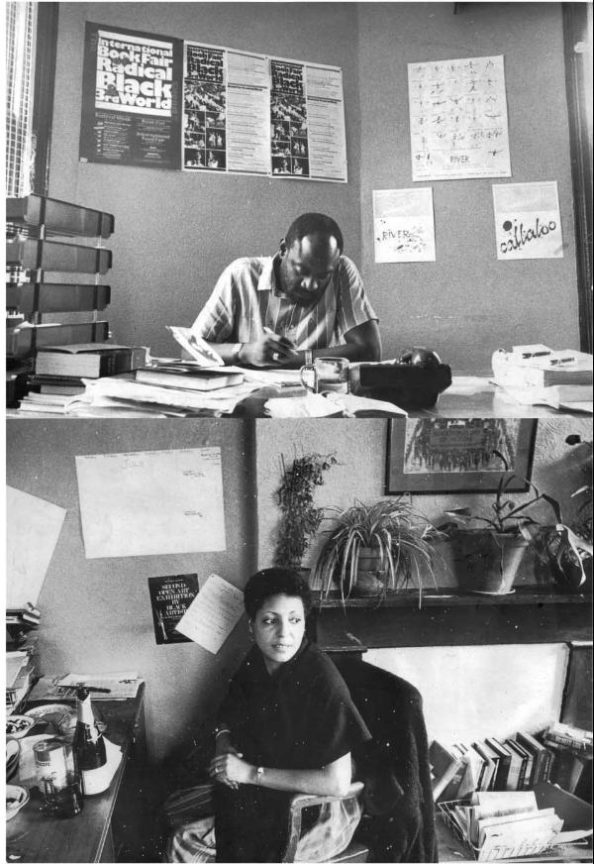 Race Today, however, was not always a radical, anti-racist publication. Founded in 1958, and the monthly output of the Institute of Race Relations (IRR), originally the publication was far more scholarly and conservative in scope.

In protest of the overly academic and politically neutral stance adopted during the early editorship of Peter Watson, and the broader editorial committee, in 1972, Race Today staff, led by IRR librarian Ambalavaner Sivandandan, staged an internal coup, wrestling control from the cautious IRR management council in favour of a more radical direction.

Howe embodied that new direction. A seasoned journalist, he not only had experience in campaigning media through his work for the Black Panther party’s Freedom News but was also the editor of the short-lived Black Dimension journal. Howe’s media experience, combined with his extensive organising and political knowledge of Black liberation struggles and colonial legacies, ultimately made him a perfect appointee to execute this new radical vision.

Indeed, as the Guardian noted at the time, Howe was tasked with “steer[ing] the magazine from its quasi-academic origins towards the front lines of racial politics”. In doing so, he took great inspiration from his great-uncle and political mentor C.L.R James.

James, a Trinidadian historian and socialist intellectual, rejected ethnic nationalism and instead advocated unity between the white working classes and non-white communities, believing that more could be achieved by harnessing the power of a broad-based alliance. 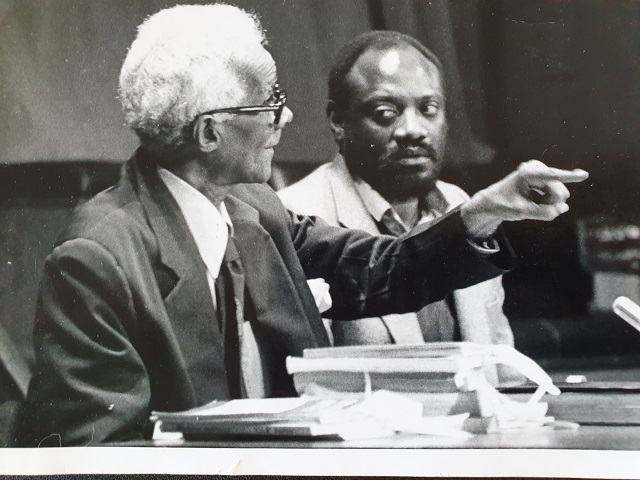 Inspired by James’ book Facing Reality, Howe was, in his own words, conscious of making the journal a platform for grassroots movements, “as opposed to [their] vanguard”. In that vein, Howe, in his first editorial, set out his commitment to centring the voices of Black and working-class communities instead of speaking for them. He clarified that under his leadership, Race Today would “opens its pages to the tendency which seeks to give a theoretical clarification to independent grass-roots self-activity with a view to furthering its development”.

In a final split from the IRR, Howe covertly moved the journal’s offices from an institutional building in King’s Cross to a squatted building in Brixton; the heart of the Black community.

The relocation came about as a result of increasing tensions between Howe and Sivanandan, with the former fundamentally disagreeing with the latter’s stance that Black people were victims.

Aided by fellow contributor Farrukh Dhondy, Howe surreptitiously packed up the journal’s office and relocated it to a recently squatted building on Shakespeare Road. The building was sourced with the help of former Black Panther member Olive Morris, who organised a further squat operation on Railton Road, which eventually became the settled offices for the collective. 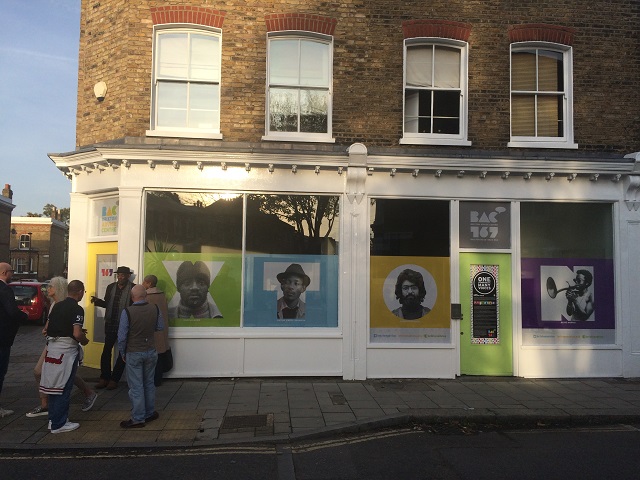 Now free from all editorial constraints, and with the explicit Marxist goal to “record and recognise” workers’ experiences, Race Today’s coverage was consistently international in scope, analysing and drawing links between anti-colonial liberation movements, class struggles and socialist alternatives to state organisation across the world. In this vein, stories of state harassment of the Black community in the UK would appear alongside and in dialogue with discussions around the plight of minority workers in the global south. 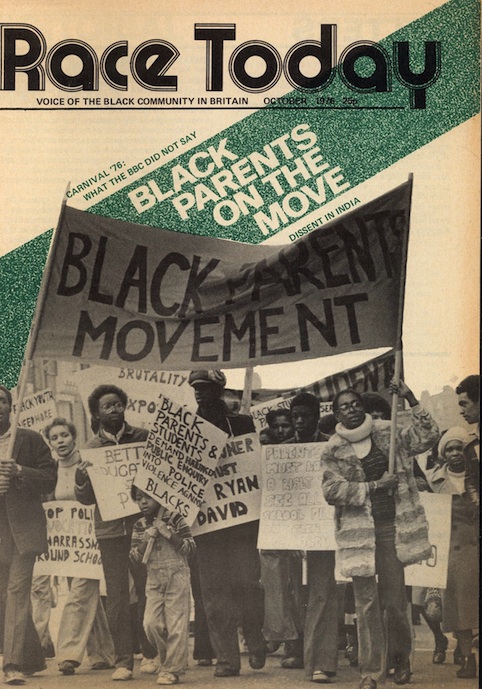 An issue of Race Today from October 1976.

Heeding the advice of James, Howe was particularly cautious of ensuring the journal’s national output was not too London-centric. As well as maintaining strong links with the Bradford Black Collective, who had been fighting local police racism, the journal extended its networks to the Republican struggle in Ireland. As a show of solidarity, Howe featured a short story by Bobby Sands, a volunteer from the Irish Republican Army, who was taking part in a hunger strike during the Irish civil war.

A trademark feature of the journal was its frequent inclusion of first-hand accounts by ordinary workers. Rather than speaking for working people, as most publications did, Howe took inspiration from another of James’ comrades, journalist Raya Dunayevskaya, who used the term “full fountain pen” to describe the process of typing up and transcribing the testimonies of working people to ensure they were accurately and intimately captured.

Race Today was not just about worker’s struggles however, the organisation believed that culture and politics were inextricable, with liberation movements and cultural movements emerging hand in hand. As a result, the journal was committed to celebrating and platforming  Black self-expression, engaging with the cultural explosion of art, poetry, music, literature and even sports that were happening during the 1970s and ‘80s.

As well as platforming the works of literary icons such as Toni Morrison, James Baldwin and Ntozake Shange, the collective was also involved in organising cultural events like the International Book Fair of Radical and Third World Books. The group even formed their own masquerade band known as the Race Today Mangrove Renegade Band with the support of musicians from Ladbroke Grove. 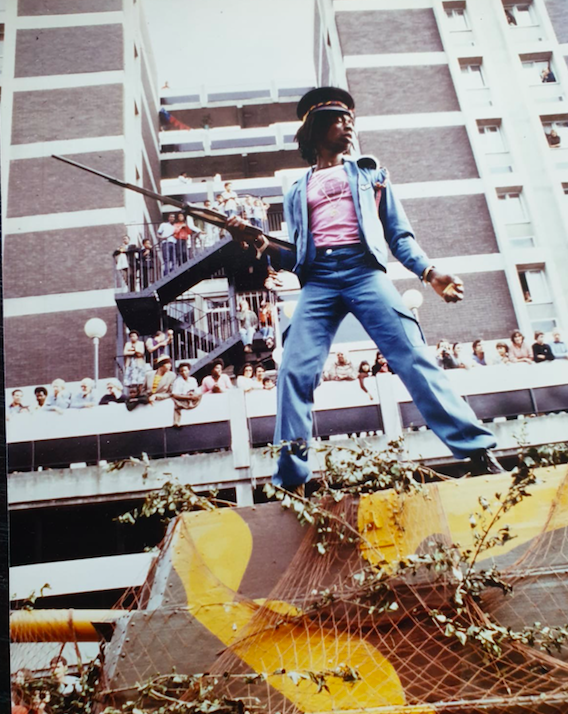 A member of the Race Today Renagade Band at Notting Hill Carnival to celebrate the African liberation movement against Portugal.

From the very outset, the collective put its organisational weight behind countless grassroots justice campaigns: from the Brockwell Park Three, three young black men who were severely beaten and arrested by police at a firework night in south London, to George Lindo, who was framed for robbery in Bradford. 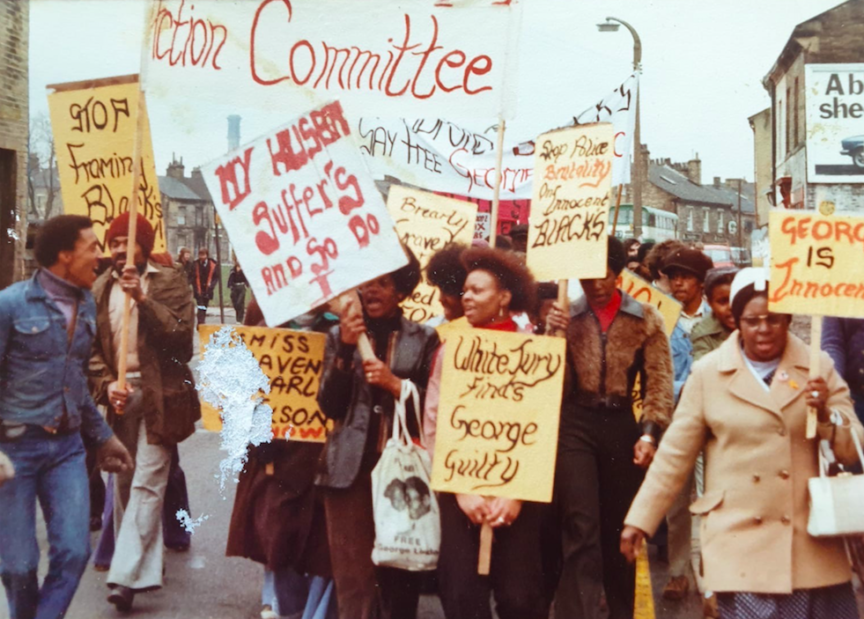 A protest to free George Lindo.

But the group’s largest organisational effort came in 1981 when it organised the Black People’s Day of Action in protest of the police response to the now-infamous New Cross Fire, which saw 13 Black young people at a house party killed, after the residence they were in was bombed. In the aftermath of the fire, the Black community was certain that this was a racist attack due to the notorious National Front activity in the area.

As a result, the group organised the New Cross Massacre Action Committee and the subsequent Day of Action. The protest march, which saw 20,000 predominantly Black people take to the streets, placed considerable pressure on the investigating police and demonstrated the strength of the Black community. Not only did the march bring London to a standstill, but it became the largest demonstration of Black Britons in the country’s history. 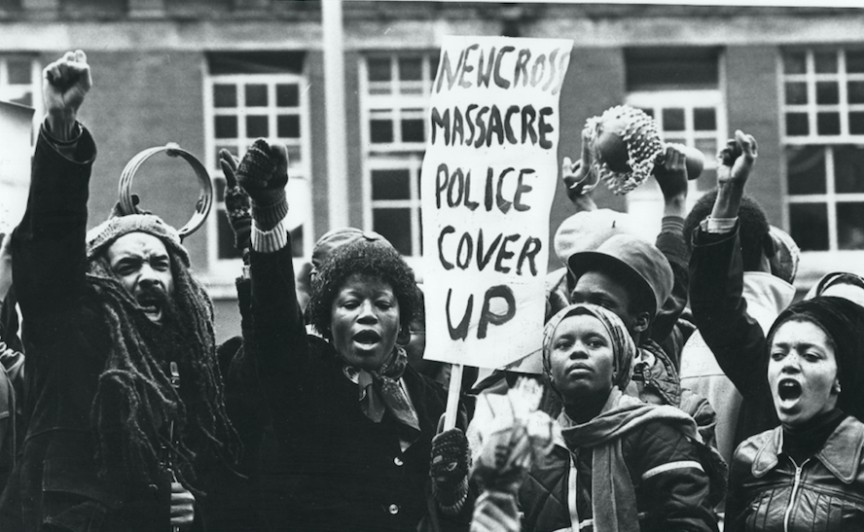 Protestors at the Black People’s Day of Action.

But significantly, the group’s support was not extended exclusively to Black causes and they rallied behind other marginalised communities as well. For them, ‘Blackness’ was understood, not just as an ethnic signifier, but as a politically unifying term that encompassed all people of colour who had been exploited by colonialism and oppressed by racism and capitalism.

To that end, the collective supported various Asian led struggles: from the successful three-month-long workers strike against workplace racism at Imperial Typewriters in Leicester (in which the journal published eye-witness accounts and analyses) to the Bengali housing campaign that was fought throughout the mid-1970s.

During this landmark struggle, the collective, led by South Asian members Dhondy and Mala Sen, supported the Bengali community in their fight for better housing conditions and against evictions by Greater London Council (GLC). This support took the form of organising protests and supporting the Bengali Housing Action Group (BHAG) in their housing campaign, with the group instrumental in helping to organise the largest squat in British history in London’s East End.

The organisation further aided the squatters, not only by frequently printing first-person accounts from the Bengali community in its journal but also by sending legal consultants to assess the legality of their squat action. As a result of a three-year campaign of direct action with the BHAG, the collective was able to achieve a near-impossible victory: an entire community was re-housed by the GLC. 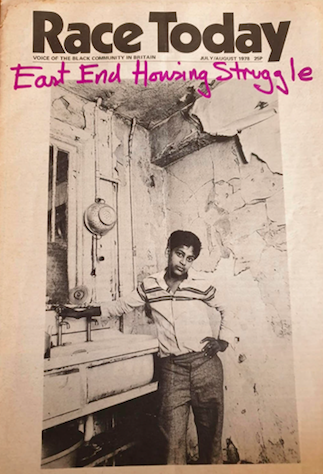 After 15 years of groundbreaking reporting and activism, Race Today’s final issue was published in 1988. With Howe’s attention shifting from print journalism to broadcast, his burgeoning television career – particularly with Channel 4 – resulted in him stripping back his editorial duties. And as a result, in 1985, Hassan was appointed the new editor. But with Howe stepping back, and the journal already under financial difficulties, it wasn’t long until the journal put out its final issue.

Despite this, Howe was initially committed to keeping the collective alive, arguing that it should continue its important campaigning work. However, this all changed in 1989 with James’ death, which, according to former member Linton Kwesi Johnson “created a pall over everything”. At this point, Johnson recalled, he “didn’t think the leadership’s heart was in the organisation any more”, and indeed Howe himself believed that the group had “exhausted the moment”. With the will to continue gone, the Race Today collective was formally disbanded on 7 April 1991.

Despite being so widely read and influential in the 1970s and ’80s, now Race Today is difficult to access, with the journal and collective’s work omitted from popular accounts of the era.

Setting out to remedy this, in 2019, radical publisher Pluto Press worked with former members of the collective to release an anthology featuring key reports from the radical journal. Former Race Today editor and co-publisher of the anthology Leila Hassan spoke of the current relevance of the revolutionary publication, saying:

“I hope this anthology will bring to a new generation the radical Black movements of the ‘70s and ‘80s which have hereto been under-reported and are rarely known by current activists and people interested in race and politics.”

The journal’s political analysis, and the action taken by its editorial collective, demonstrates the power of intersectionality when critiquing systemic oppression and campaigning for social justice – a lesson that should be heeded by the current Black Lives Matter movement.

And while political Blackness is now seen as a controversial ideology, today’s activists would do well to think about creative ways in which to build broad-based alliances during anti-racist struggles, so that prejudice of all kinds can be effectively combatted.

Race Today was a truly radical publication and within the pages of its anthology lies a rich history of Britain’s Black radical tradition. The journal was not an instructive periodical, but rather a conduit for Black self-expression. Dhondy perfectly summarises the legacy of the collective as being “instrumental in the strategic self-organisation of new communities in Britain”.

The evolution of the publication offers today’s activists and journalists inspiration for transcending the conventions of traditional journalism. Far from merely writing about movements, the Race Today journal and collective was actively part of them, working to harness the truly radical potential of the media to bring about real and meaningful change.

This article is the third instalment in Black Britannia, a series which reflects on the country’s Black radical history.

Part two is here: There Is a Long, Racist History of State Surveillance of Black Communities.