by A doctor in Myanmar

Police shot and killed at least 18 people in Myanmar on Sunday in the deadliest crackdown on protests since the military staged a coup d’etat on 1 February.

For the past month, a civil disobedience movement – led initially by doctors – has engulfed the country, with hundreds of thousands of people joining daily marches and ongoing strikes to demand a return to democracy.

The military has refused to back down, seeking to justify the coup by claiming the NLD, the winning party in last November’s general election, rigged the vote. NLD leader Aung San Suu Kyi and other government officials have been detained since the start of February, with military chief Min Aung Hlaing declaring a year-long state of emergency.

The violence this weekend was a marked escalation, taking the death toll so far from three to at least 21. Police fired live ammunition into crowds in several towns and cities, with videos on social media showing demonstrators fleeing tear gas and carrying the dead and wounded.

More than 200 doctors are also believed to have been detained, bringing the total number of protesters arrested, charged or sentenced in relation to the coup to 1,132 – and rising all the time.

A doctor in the north of the country shared his experience of the movement so far with Novara Media.

On 1 February we awoke to a completely dark country; our internet connection and telephone lines had been shut off and nobody knew what was going on. When they were switched back on hours later, we found out the country was in a coup d’etat.

The doctors were the first to start protesting, launching the civil disobedience movement by refusing to go to work. By the end of the week, most government departments had joined them. That’s also when people started going out to protest. They haven’t stopped since. Our energy has fluctuated, but there are still hundreds of thousands of protesters on the street every day, mostly young people.

We know protests alone won’t force some majestic change from the military – we are familiar with dictatorships. But by getting all government workers to strike, we think we can successfully disrupt the system enough to win. This means a big aim of the protests is to support and raise awareness of the civil disobedience campaign and to ask public servants to join in.

The police and army have responded to the protests with sporadic, unpredictable and sometimes horrific violence.

This weekend was the worst yet. At least 18 people were shot dead – we believe it was probably more – and dozens were injured. In Yangon, tens of thousands of doctors formed a ‘white coat’ protest line. 200 of them, including several of my friends, were arrested and taken away in six police vans. 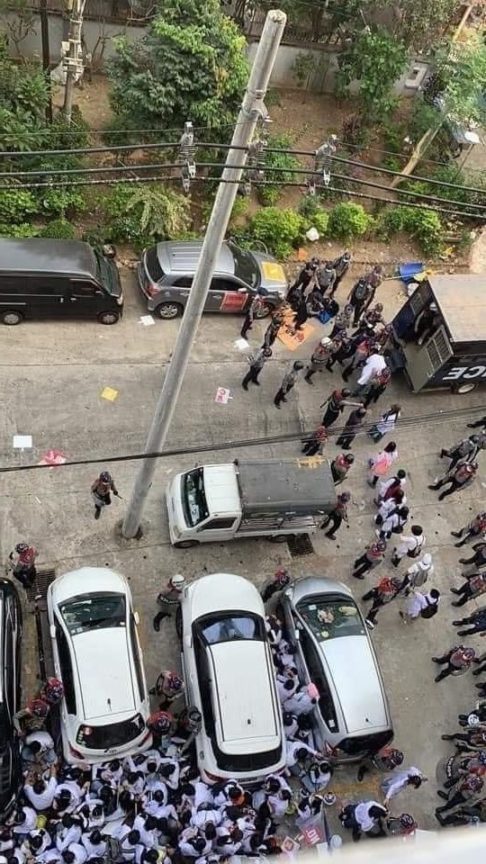 It seems like when things calm down in one place, they kick off elsewhere. Three young people were shot to death in Mandalay during a peaceful demonstration a couple of weeks ago – one was a 16-year-old boy. When I first saw the video, I broke down crying. He was trying to help another person who had been hit when they shot him in the face. Before that, in Naypyidaw, they shot a 20-year-old woman in the head.

At 8pm every night, every (non-military) household bangs pots and pans. This is a traditional way to ward off evil, so essentially we’re telling the military: “You’re a bad entity, you’re not welcome in this home. This is our country. Leave.”

We are under martial law that bans us from going out at night and for the past week and a half our internet has been cut off between 1am and 9am. During this time, the military invades homes and kidnaps people involved in the protests – mostly public servants who have been participating in the civil disobedience movement.

Use Signal, get a VPN, trust no one.

We gather in different places each day. Sometimes we only find out where to go at 7 or 7.30 in the morning.

We use lots of different platforms to communicate but Signal is a big one. We use VPNs to disguise our locations and we try to communicate in a chain; so, for example, I have credible sources who update me on the protests, but I try not to know who my sources get their information from and we don’t post messages in big groups. It’s all done by word of mouth. I have one friend who is an organiser, and I make sure they don’t tell me anything so that if I am caught, I won’t have any information to give to the so-called authorities.

Some people prefer to just go out on the streets on their motorbikes and look for the crowd.

The military has tried various tactics to stop the protests; from spreading fake news and conspiracy theories – for instance telling us early on that protesting would escalate the situation, while going about our lives as normal would allow them to give our country back – to junta stooges joining marches with pro-military placards. About two to three days after the protests started, they banned people from gathering in groups of five or more. Rather than defying the rules we tried to find a way around them: we made people form lines of four and spaced each line three to five feet apart. But it didn’t last long, with people quickly moving back into a large crowd.

Doctors are key targets for the military because they have led the civil disobedience movement. This means most doctors have to remain vigilant and hidden. I’m a qualified doctor but I’m not a public servant, I work for an NGO, so I’m not on strike and, as far as I know, the military is not after me. After a few days, I realised the crowds needed medical support, so a group of doctors like me started to go out on to the streets covertly, but dressed in a certain way so that each of us can identify each other. We take backpacks full of medical kit and we have medical teams stationed at certain points.

Even when organising among doctors, it is difficult to know who to trust. Some doctors are from military families and the military has been known to get the information from their family members who are in contact with other people. At the moment, we will only share information with people who are referred by someone we trust.

Before the protests started we were in a strict lockdown. Covid was a major problem. But now the hospitals are shut down because the doctors are on strike and the only places to get tested are military facilities, so it is impossible to gauge the spread.

There’s a joke we make: we say Covid is also taking part in the civil disobedience movement, because it seems it’s nowhere to be seen.

Most of the people who go out are young people and 85 or 90% of them wear their masks, so perhaps the virus isn’t spreading too badly. Masks are also useful because they make it more difficult for the police to identify and track protesters.

We can win this.

There is no leader of the civil disobedience movement, it is being led and coordinated by the people. We are learning as we go, by trying different things, and by looking to other movements around the world, such as those in Hong Kong and Bangkok.

We use social media a lot, especially Facebook. If someone thinks of something that we should change or be careful about, they share it online and if it resonates it spreads fast. Fake news and conspiracy theories have been big problems, but people have learned very quickly what information to believe. They have become much more discerning in a very short space of time.

Gen Z has been very inspiring in coming up with new ways to get their voices heard. It’s largely thanks to them that the protest has evolved and taken many forms. They have also strongly advocated for inclusivity.

In the same way the Covid crisis forced people to become interested in public health and epidemiology, the protests have led people to really learn what democracy is and why we should be fighting for it. But beyond that, it has made people reconsider their attitude to ethnic minorities and in particular the Rohingya. The coup has been a reality check for a lot of people, it has humbled the Burmese majority [the largest ethnic group]. Now that the army is oppressing them, they are realising how oblivious they were in the past to what people from ethnic minorities have had to face all their lives.

One of the ways in which this has manifested was in an effort early on to make sure the protests were not explicitly pro-NLD or pro-Aung San Suu Kyi [which alienates those, in particular, ethnic minorities such as the Rohingya, who have been let down by Suu Kyi and do not support her party] and instead to have everyone remember that they are anti-military coup and nothing else. This was a struggle at first in Yangon and other large cities [with majority Burmese populations] where many people were waving NLD flags, but things have changed now.

The other day, I caught myself smiling, because I thought, oh my God, when – I don’t want to say if – we win, we are going to be much better citizens, living in a much better system. When we win, the military will be completely out. In five years, we can have an actual democratic election where the NLD is not our only option. We will get to hear what each candidate stands for and we will get to vote based on that, rather than being forced to vote for the only party that stands a chance of driving out the military.

Ten years ago today, regime security forces in Bahrain attacked unarmed protesters camped at Pearl Roundabout, Manama. In the third piece of his series on the Arab uprisings, David Wearing looks at how the UK helped crush Bahrain’s pro-democracy movement.

Analysis: Myanmar’s Military Was Already in Charge, So Why Did It Stage a Coup?

Myanmar's military seemed to have everything it wanted. So why has it staged a coup against a government that had no meaningful way to threaten its power? Joshua Carroll explains.

International: Why Are India’s Farmers Staging the Biggest Protest in History?

As tensions mount between protesters and authorities in New Delhi, Simran Jeet Singh explores the legacy of exploitation and neglect that has paved the way for India's historic farmers' protests.