A decade ago today, regime security forces in Bahrain attacked unarmed protesters camped at the major roundabout in the country’s capital, Manama, at 3am while they slept. The occupation of major public squares and spaces had become a key tactic of pro-democracy movements over the early weeks of the Arab uprisings, from Tunisia to Egypt, and now in the tiny Gulf kingdom bordering Saudi Arabia. Over the preceding days, a warm and jubilant atmosphere had prevailed in the Pearl Roundabout as demonstrators from Bahrain’s various communities intermingled, united in their call for democracy.

Over 200 protesters were injured and three killed on 17 February 2011 – or ‘Bloody Thursday’ – as they were driven from their camp with clubs, knives, tear gas and shotgun rounds. Resistance remained overwhelmingly peaceful despite repeated regime brutality before and after this particularly egregious assault, and the protesters remained resolute. Indeed, a march of tens of thousands on 22 February was reportedly the biggest of the entire region-wide uprisings, measured by proportion of population. 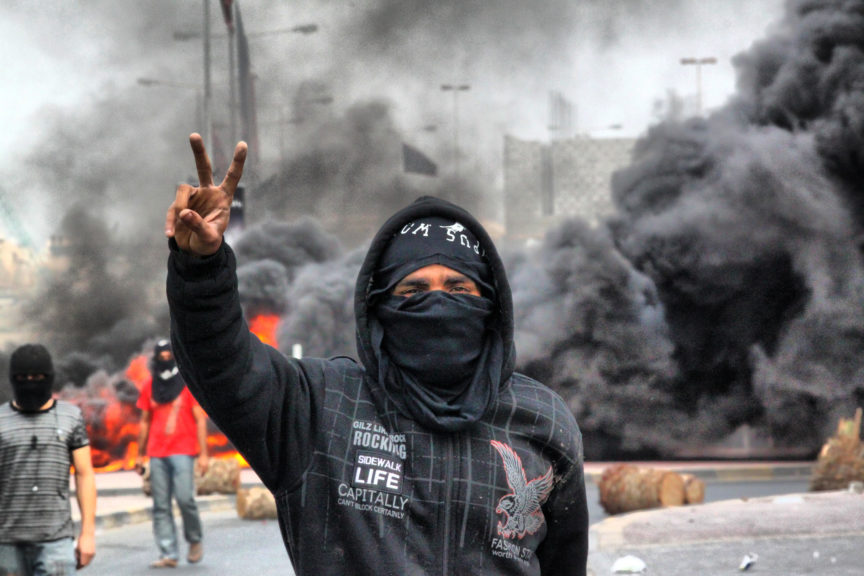 A protester makes the peace sign amidst chaos near Pearl Roundabout. Freedom House/Flickr

The stand-off between the monarchy and the pro-democracy movement continued for a month, with the regime deploying a two-pronged strategy of minor political-economic concessions on the one hand and lethal repression on the other. The decisive move came on 14 March, when a Saudi-UAE intervention force entered Bahrain in a crucial act of inter-monarchical solidarity. Once Saudi and Emirati troops had secured the island’s main strategic facilities, Bahraini forces were free to set about crushing the uprising for good. A state of emergency was declared. The Pearl Monument at the centre of the roundabout was symbolically demolished.

The crackdown ground on inexorably over weeks, then months, then years. Last week, Amnesty International noted that over the past decade, “political repression has intensified in the country. Dissidents, human rights defenders, clerics and members of independent civil society have been silenced, and any space for the peaceful exercise of the right to freedom of expression or peaceful activism extinguished”.

In the previous article in this series, we discussed the three lines of counter-revolutionary battlements that pro-democracy forces had faced during the Arab uprisings of 2010-11. First, the regime; second, the regime’s regional backers; and third, the international powers underwriting the status quo. Bahrain represents a classic case of this dynamic playing out.

In the heady days of 2011, the talk was of ‘revolution’ sweeping the Arab majority world. In the second piece of a series on what these events can teach us about Western imperialism in the C21st, @davidwearing takes a look how the uprisings were thwarted. https://t.co/SDVwqcOE4m

Bahrain, like its neighbours the UAE, Qatar, Kuwait and Oman, had been a British imperial protectorate for over a century before gaining its independence in 1971. More recently, these monarchies have become informal US protectorates, alongside Saudi Arabia, with the UK playing an important supportive role in military and diplomatic terms.

The Western powers were on hand throughout the entire process of state formation from the nineteenth into the late twentieth century. They worked assiduously to help shape these processes, ensuring that monarchical rule survived and popular forces were sidelined or subdued.

The six monarchies also hang together – notwithstanding their differences – in a conservative bloc called the Gulf Cooperation Council (GCC), reflecting their shared geostrategic interest in the maintenance of a conservative regional order under Western patronage. Bahrain has little strategic value by itself. Its oil reserves have dwindled almost to nothing, and it lacks the sovereign wealth of its larger neighbours. But it was well understood in early 2011 that a successful revolution in Bahrain could quickly trigger a domino effect in the wider Gulf. In strategic terms, that was unthinkable.

Between them, the Gulf monarchies sit atop around 30% of the world’s proven oil reserves, while just under half of global reserves can be found in the wider Gulf region, including Iraq and Iran. It is a simple matter of great power geopolitics that whoever controls the Gulf holds huge structural power in the world system. These are the considerations that determine the West’s strategic commitment to the region, and to their allied regimes.

Aside from a brief and partial suspension of arms exports at the height of the 2011 crackdown, the flow of weapons from the UK to Bahrain continued substantively unimpeded. This included arms suitable for internal repression, such as rifles, ammunition and tear gas. The Saudi troops in the GCC intervention force had arrived in Tactica armoured vehicles supplied by the UK.

The continued provision of these arms was a clear signal of support from the British government, as was the opening of a new British naval base in Bahrain in 2015 – the centrepiece of a broader strategic vote of confidence in the regime. With this and similar signals from the Obama administration in Washington, plus the steadfast support of its brother monarchies, the regime enjoyed the impunity it required to complete the anti-democratic crackdown and consolidate its position.

While the spotlight remained on Bahrain during the early 2010s, London justified its unbroken support for the al-Khalifa monarchy on the basis that the latter had learned its lesson from some regrettable excesses during February and March 2011, and was now engaged in a meaningful process of political ‘reform’. It also strove to cast the situation as one of sectarian unrest rather than political contestation, placing trust in the ‘moderate’ regime to preside over a healing ‘national dialogue’.

This story was flatly contradicted by expert observers and the consensus from all the leading human rights NGOs. Amnesty International and Human Rights Watch reported year-on-year that the political situation was deteriorating in the country thanks to the regime’s punitive measures, and that ‘national dialogue’ was a joke when the regime’s critics were in jail, and reportedly subject to torture. Gulf expert Dr Kristian Coates Ulrichsen told the UK parliament’s foreign affairs select committee that sectarianism had been the regime’s own policy, as it worked to break the broad-based pro-democracy movement “in a classic tactic of ‘divide and rule’”.

The story London wanted to tell was the classic racist fairytale handed down from the days of empire: the well-meaning British were the source of progress, working as best they could with what ‘moderate’ allies they could find on the ground. The Arabs, on the other hand, were consumed by ancient hatreds, with minimal reform under the firm hand of a benevolent monarchy the best that could be hoped for given the backward culture of the region.

The reality is that governing elites in the UK and the Gulf had colluded once again to drive back popular forces striving for self-determination and their basic human rights. Here, democracy was a threat to British interests, lest it take a strategically valuable piece of real estate off in an independent direction. Once we are prepared to acknowledge the true nature of British power in the world, its connivance in the crushing of Bahrain’s pro-democracy movement is something that can be readily understood.