We must resist the Tory crackdown on our access to land.

Being in the countryside, said folk singer Ewan McColl, breeds “a spirit of revolt” among the working class. On 24 April 1932, McColl, then a young, unemployed communist known as Jimmy Miller, and more than 400 others participated in a mass trespass at Kinder Scout, the highest point of what is now the Peak District National Park.

Organised by Manchester members of the Young Communist League and led by Benny Rothman, the son of Romanian Jewish immigrants, the trespass demanded public access to the private moorlands – the majority of which were reserved year-round for the rich, who used them for grouse shooting on just ten days per year.

The organisers’ leaflets urged comrades in Manchester and Sheffield to join the trespass and “take action to open up the fine country at present denied us”. One flyer read: “Come with us for the best day out that you have ever had.” The working class – who mostly spent their weeks in polluted cities, working gruelling, boxed-in factory jobs, or scraping by, unemployed – were demanding the right to roam; the right to respite.

As reported by the Guardian at the time, Kinder Scout trespassers “fought a brief but vigorous hand-to-hand struggle with a number of keepers” hired for the day by the landowner, the Duke of Devonshire, and sang socialist anthems including the Red Flag and the Internationale as they marched. When the trespass was over, six ramblers were arrested and jail sentences meted out. Since trespass was not a criminal offence, their charges related to ‘riotous assembly’ and public order offences.

The injustice of imprisonment for simply walking in the countryside eventually “captured the popular imagination,” says Nick Hayes, author of The Book of Trespass. Many more mass trespasses followed. In 1949, the National Parks and Access to the Countryside Act passed. And in 2000, the Countryside and Rights of Way Act opened up more land for public access.

This month, whilst debating the criminalisation of trespass, Margaret Greenwood MP called the Kinder Scout mass trespass “the most successful example of direct action in British history”.

Next Saturday is 89 years since the famous mass trespass on Kinder Scout in the Peak District on 24 April 1932. Read our thread on why it should remind us of the importance of direct action and civil disobedience – and why we need to #KillTheBill https://t.co/Ter1hfFYRU

Today, 8% of England’s land is accessible to the public, whilst half of the country’s total landmass is private: property of the 1%. There are only a few places in national parks where camping is permitted. But despite the foreboding ‘trespassers will be prosecuted’ signs intended to frighten off ramblers, trespass is not a criminal offence.

The current government, however, would like this to change. In their manifesto, in a 2019 consultation, and now in the Police, Crime, Sentencing and Courts Bill, the Tories are pursuing a crackdown on people’s access to land – and the criminalisation of trespass. Much of this attempted legislation represents targeted – potentially unlawful – racist discrimination against Gypsy, Roma and Traveller communities, as well as posing serious threats to the freedom of assembly and the right to protest.

We don’t want to break the law. We want to change it. Join us! pic.twitter.com/F6QTwuieYd

Historian and writer Richard King believes the government’s crackdown on trespass is one aspect of its “general, ultra-draconian approach to policing what we can and can’t do”. The history of Kinder Scout has become part of a “sentimentalised […] folk memory” of Britain, he says – but amidst the socialist nostalgia, we must be attentive to “how quickly all [the direct action’s wins] can be taken away”.

Going for a “nice walk”, may feel like a simple freedom, but “what Kinder Scout symbolises is far more serious than that,” says King. In the proposed police bill, he says, we are witnessing “a government that’s pathologically addicted to curtailing anyone’s right to do anything much,” whilst vilifying marginalised groups.

One of the victories of Kinder Scout, says King, was in “acknowledging that […] power lay in land ownership” – something that, especially for urban dwellers, it can be easy to forget. Since the enclosure act of 1773, which removed land from common access, land has represented a key site of class struggle – and owning it, concomitant with authority and influence. Indeed, the right to vote was historically for landowners only, and until recently land ownership got you a seat in the House of Lords.

Novara Media · #NovaraFM: The Bodies on the Gears: How to Blow up a Pipeline

“Just being present” in the countryside today puts Black people and other people of colour at risk of racism, violence and criminalisation, says Josina Calliste, co-founder of Land In Our Names (LION), which “aims to disrupt oppressive land dynamics relating to BPOC communities in Britain”. And the police bill, she says, means “things could get a hell of a lot worse”.

For people of colour, struggling for land access is related to “reparatory justice”, says Calliste, since “a lot of the most wealthy landowners inherited their land that was gotten through enslavement and colonialism”. Land justice, then, means centring the experiences of Black people and people of colour, who are also most exposed to the dangers of the climate and ecological crises caused by the capitalist exploitation of land.

For Caty Murray, an organiser with Sheffield Needs a Payrise, walking in the local Peak District is a stark reminder that protest works. “It wasn’t by luck that we got access – the access was won by trespassing and by direct action,” she says. “And that’s something [the police bill] is trying to crack down on.”

When “people’s lives are already so restricted and controlled – at work, by their landlords, at home,” she says, it is vital we resist the government’s intentions to suppress our freedoms further. Which include simply existing on the land – a cause with increased stakes for GRT communities, people of colour, homeless people and protesters, but which affects everyone’s quality of life.

On the anniversary of Kinder Scout, as we face the draconian threat of the police bill and the further criminalisation of trespass, Hayes says it is vitally important we resist passive cultural tendencies. “People, especially those brought up in England, have this desperate need to believe the aristocracy, the systems of power, police and gatekeepers, are acting in the public interest,” he says. “But just like in Kinder, they are defending the interests of a privileged elite.”

Thankfully, there is a “long, long, long history [in Britain] of opposing land seizures, opposing enclosures, opposing settler colonialism,” says Calliste – of which Kinder Scout is just one story. Hayes points to the 1896 Winter Hill mass trespass in Bolton – “a protest that saw 10,000 people uproot gates newly erected over a right of way that had its desired effect almost instantly.” 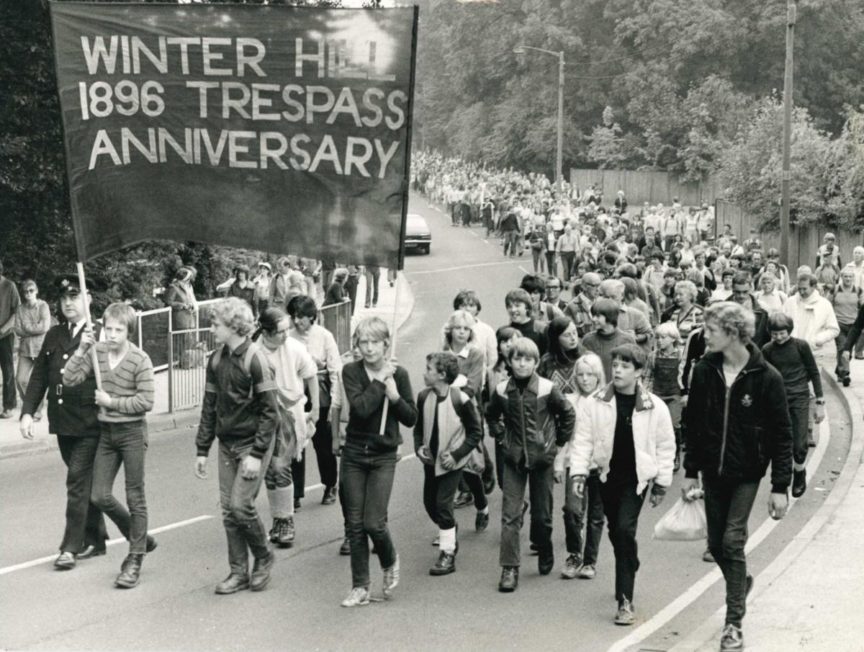 This summer, Hayes and others are organising mass trespasses as part of the Right to Roam campaign, which demands increased public access to the landscape. The trespasses will be led by musicians, poets, artists and ecologists, and include litter-picking, with the aim of reconnecting people to the landscape, “to show us what we’re missing out on […] because we’re not allowed access to it,” says Hayes.

With Kinder Scout as “a sighting stone for further actions […] history has fallen on the side of trespass,” says Hayes. And as we face further limitations on our freedoms, it remains up to protesters to resist state oppression and demand our freedoms “with an urgency incompatible with the genteel corridors of power”.

The right to roam is a radical starting point for struggle, says Hayes, “because it inches us towards a ‘commons’ mentality, a society where no-one is marginalised, and every commoner has power to enjoy, and decide upon the management of, our environment”. When Scotland introduced the right to roam in 2003, he notes, “it applied to everyone who touched that land […] regardless of birth, race, class or gender”.

We don’t want to break the law. We want to change it. Join us! pic.twitter.com/F6QTwuieYd

Demanding public access to the land we live on – in the Kinder Scout protest of 1932 as in resistance to crackdowns on our freedoms today – is about survival, freedom and justice for all. It is also about pleasure. As well as access, the Kinder Scout trespassers demanded an end to “petty restrictions such as singing etc”; today, the police bill lists “serious annoyance” as among offences punishable by up to ten years imprisonment.

‘Manchester Rambler’, McColl’s song inspired by the Kinder Scout mass trespass, is about the essential freedom to experience pleasure, away from work. In a lesser-known song about rambling, McColl writes of “days in the sun and the tempered wind and the air like wine […] and you drink and you drink till you’re drunk on the joy of living.”

As we emerge from the mass suffering of lockdown, fighting the government for our basic freedoms, the history of Kinder Scout is hopeful: we must demand not only survival – but freedom and pleasure, too.

Opinion: Gypsies and Travellers Are Under Attack – And So Are Our Collective Freedoms

From Priti Patel's police bill to a racist local Labour leaflet, Gypsies, Roma and Travellers are facing attacks from all sides. If GRT culture is stamped out, then everyone else’s liberties will be just one step behind, writes Jake Bowers.

Long Read: Who Dreamt Up the Police Bill? The Police, Of Course

The police, crime, sentencing and courts bill didn't come from nowhere. It is the result of years of lobbying by the police, helped by an authoritarian state, rightwing press and pliant opposition. Sam Knights takes a closer look at how it came into being.

Report: ‘Land justice is racial justice’: People of Colour Are Reclaiming Their Right to Nature

While the UK land justice movement has gained momentum in recent years, the significance of land in the struggle for racial justice remains largely undiscussed. Yali Banton-Heath speaks with Josina Calliste, co-founder of Land in Our Names, a collective helping people of colour to the land, about the necessity of centring land access and food sovereignty within the wider struggle for racial justice.