Keir Starmer Is Now the Worst Person, at the Worst Moment, to Lead the Labour Party

It almost looks like Starmer doesn't actually want to be prime minister.

Does Keir Starmer actually want to be prime minister? That’s something I’ve been asking myself with greater frequency, particularly since the Hartlepool by-election.

How else, aside from him actively wanting to lose, can one explain Starmer expending such immense political capital to impose Paul Williams, a vociferous voice to stop Brexit, in a seat where 70% voted to leave the EU? What is more, by refusing to give the local party any say, the leader’s office ensured responsibility for failure fell squarely on its shoulders.

Then there is the fact that while Starmer incessantly accuses Labour of talking to itself, he is more guilty of that than anyone. While members, many of whom voted for him, wish to focus on policy and an economic response to the devastation of Covid-19, the leader obsessively mentions the party’s failings – and why people are right to dislike it. His big political battles over the last 12 months? Against his predecessor and Labour’s own membership, all while offering ‘constructive opposition’ to a prime minister overseeing the highest coronavirus death toll in Europe. While Boris Johnson celebrated victory alongside local landmark the HMS Trincomalee in Hartlepool, Starmer limply responded from Westminster – a brylcreemed Comical Ali rather than a prime minister in waiting.

Crushing defeat for Labour in Hartlepool. Not possible to blame Jeremy Corbyn for this result. Labour won the seat twice under his leadership. Keir Starmer must think again about his strategy #HartlepoolByElection

Another favourite complaint from Starmer, a man who boasts about taking responsibility, is that Labour is stuck in the past. Again this feels like projection, with Starmer’s two favourite topics over the last 12 months: the result of the last general election and the failings of his predecessor.

More bizarre still is Starmer’s abrasive treatment of the party’s existing voters, something which increasingly feels akin to kicking a loyal dog. In the morning media round following Hartlepool, Starmerite loyalists like Steve Reed MP appeared almost eager to berate those still stupid enough to vote Labour. Their presumption, like Starmer, appears to be that the dog will never bite back.

Why is he so bad at this?

How is it possible for a man who has not received a fragment of the media scrutiny of his predecessor to have worse approval ratings at the same point? And how on Earth does the electorate think Johnson is more honest than the leader of the opposition?

The answer is three-fold. When put together, these three factors explain a decline so calamitous that it does seem like Starmer is trying to lose. 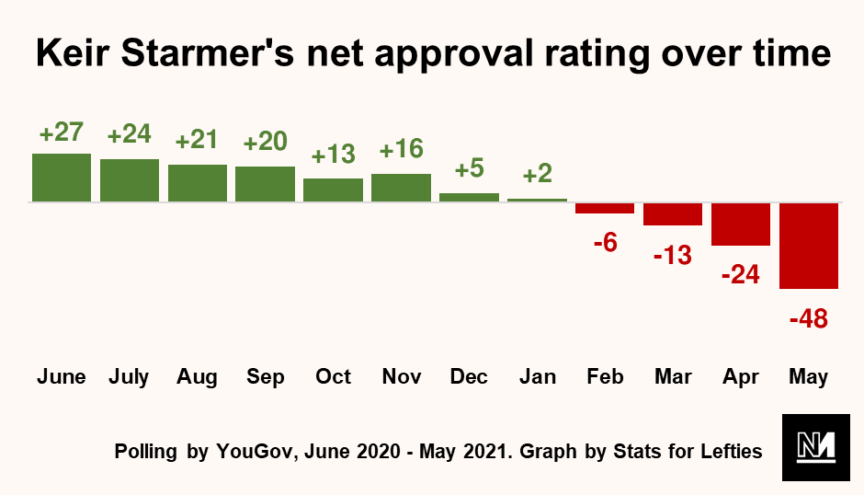 Firstly, Starmer himself has no real grasp of contemporary politics. This is why he is now so seduced by the idea of a re-run of the 1990s, whether it’s ‘sleaze’ or wheeling in the likes of Deborah Mattinson, David Evans and Peter Mandelson. Fundamentally he fails to understand the extent to which politics changed in the shadow of the 2008 crisis, with the ‘transformation’ he talks about appearing to consist of little other than returning to 2010. Such political illiteracy is somewhat understandable, after all Starmer himself wasn’t in politics until 2015, meaning he now embodies that most lethal mix of all: hubris, inexperience and incompetence.

This inability to understand why politics has changed means he still believes elections are won from the ‘centre’. Of course, this is nonsense: Joe Biden didn’t triangulate with Donald Trump but offered a distinct alternative, while Johnson wouldn’t have won an 80 seat majority in 2019, with his party still polling at 45% today, if he appealed to floating Lib Dems. The misguided presumption that Starmer needs the centre means he and his team fail to comprehend the challenge they now face. Not only are they losing social conservatives to the Tories, but the Greens are also taking voters to their left, while the Liberal Democrats poach social liberals and those who still care deeply about the EU. As Clive Lewis told Novara Media’s Michael Walker on Monday that means Labour now faces the prospect of being ‘nibbled to death’.

Momentum with small ‘m’ is important. Creating buzz/ enthusiasm for “the faithful’ is far more likely to filter through to the non faithful, than the opposite approach, eg make clear you have little time for your existing supporters and think that will impress the non faithful .

Secondly, Starmer and his team have no meaningful understanding of political action. This was made particularly clear by the move to abolish the party’s community organising team, which played a major role in winning the Peterborough by-election in 2019 and had only existed for two years. More recently Starmer allegedly told the shadow cabinet he has no interest in rallies of the party faithful. That is assuming, of course, that they would turn up. This is an extension of his mistaken view that the centre still exists, and that not talking to specific groups means you get a hearing from everyone.

As Survation’s Carl Shoben wrote on Twitter: “Momentum with small ‘m’ is important. Creating buzz/ enthusiasm for ‘the faithful’ is far more likely to filter through to the non faithful, than the opposite approach, eg make clear you have little time for your existing supporters and think that will impress the non faithful”. Disowning his supporter base might help Starmer impress the pundits, but evidence demonstrates it is counter-productive, and indeed it is the opposite of what the Tories have done since Johnson became leader, with the prime minister first galvanising his party’s base, then those that voted Brexit and finally fanning out through an agenda of ‘levelling up’.

Not only is Starmer at risk of wasting Labour’s greatest asset – its membership – if he continues on his current path, but those still voting Labour may well feel taken for granted and go elsewhere. There are already signs of this happening, with Labour losing control of Bristol council last week as the Greens gained 13 councillors (Labour lost 13) and Sian Berry coming a strong third in the race for mayor of London. While there has been much talk of Labour winning the ‘Blue Wall’, what observers fail to understand is such gains have been made using precisely the theory of political action Starmer is eagerly denouncing.

Finally, Starmer has no political vision: what he would actually like to do with power? This was lauded as smart in his first few months, with pundits claiming oppositions don’t need a thorough policy programme until a general election. But in the context of stagnating living standards for a decade, high streets in decline, climate change and now the coronavirus this looks increasingly bizarre. Thus Starmer, who has no real sense of economic policy, is reduced to meaningless re-brands where ‘jobs, jobs, jobs’ becomes ‘work and jobs’. What is more, to make up for this absence Starmer and his team do those two things they criticise the party membership for: looking inwards and backwards. The Jeremy Corbyn obsession should therefore be understood as primarily the result of a policy vacuum.

Whatever your criticisms of Corbyn, and the team around him, there was always a consistent understanding of political change, the political moment we are in and the vision that required. Starmer has no understanding and no vision, which explains his appalling approval ratings despite the media wearing kid gloves with him in comparison to his predecessor. Unless that changes it is also why Labour will likely lose dozens more seats at the next general election. It’s not that Starmer doesn’t want to be prime minister, it’s just he is the worst person at the worst moment to lead the Labour party.

Opinion: Everybody is Doing Identity Politics, Even If They Think They’re Not

Opinion: Johnson’s Government is Rotten to the Core – But Does It Even Matter?

From his “let the bodies pile high” remarks to refurb-gate, Boris Johnson is once again mired in scandal. But rather than being any mortal wound to his prime ministership, the controversies speak to a much bigger problem at the heart of British politics: what counts as corruption, and how little it seems to matter, writes Samuel Earle.

Opinion: Labour is Running a Saudi Apologist in Hartlepool – And It Should Be a Scandal

In 2018, Labour’s candidate in the Hartlepool by-election went on a state-funded trip to Saudi Arabia and came back a vocal supporter of the regime. While the party’s decision to run him in Hartlepool is certainly shocking, it’s also not even slightly surprising, argues David Wearing.