Welcome to Slacker School: Learning From the Best How to Work the Least

'I played Xbox, got into Twitter wars and spent time with my kids.' Sounds dreamy.

From time to time, a story emerges of a skiver so dedicated one can’t help but commend them. In 2016, a Spanish civil servant – dubbed “el funcionario fantasma” (the phantom official) by the press – was caught after bunking off work for at least six years. Earlier this year, that record was beaten by an Italian hospital employee, alleged to have stopped turning up to work in 2005.

Although most of us can’t hope to achieve such stratospheric levels of absenteeism, we try our best. A 2018 study found that on average, a British office worker spends 50 minutes of their working day avoiding work. This is partly due to what David Graeber calls the “bullshitisation” of the job market: contemporary work is often so pointless that we’re able to get away with doing much less of it than we’re paid to.

While for some, home-working has meant working harder for longer, for others, it’s been a year of video games, online shopping and pretending to work. (The fact that despite this, productivity rose during 2020 suggests that maybe we were working too hard in the first place.) Novara Media spoke to some of Britain’s most skilled slackers about how home-working has impacted their ability to skive, and their tips and tricks for doing the absolute least. 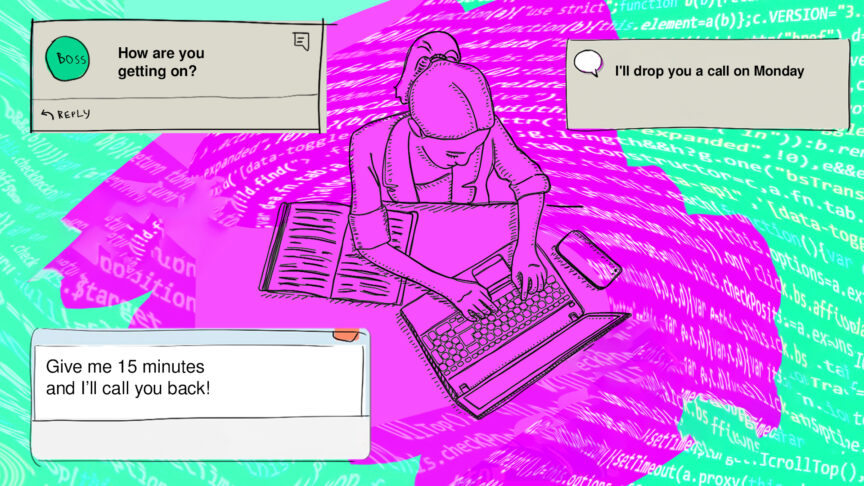 I work as a software developer for one of the ‘big six’ energy companies. People from the company come to my team and say, ‘we’ve got this problem, and we’ve heard about this cool new technology, and we want to know if it’s of any use to us. Can we use it? If so, can you prove it?’ And that’s what we do – we build proofs of concept.

On paper, my job is very interesting. It’s something I love doing. But even before lockdown, I’d say about 40% of the work I was doing was bullshit.

One example is that I did an investigation into how blockchain could revolutionise the way we trade energy. But when it was discovered the company would lose a lot of money from the outcome, it was an absolute no-go. The white paper I spent two weeks writing is now gathering dust. It’s disheartening, to say the least, but that’s not an uncommon example of finding a useful technology, wanting to use it, and then being told, ‘no, it wouldn’t be profitable’.

In the office, we’re also made to work with old or broken technology, which takes ages to use. We’re also made to manually fill in timesheets – a process that could be automated, but the company doesn’t want the software for doing this on company devices.

Since working from home, I’ve basically been able to get my job done in half the time I would in the office. Being a programmer, I’ve figured out ways to automate the most annoying parts of my work. I’ve written a set of mouse and keyboard commands to fill out my timesheets, fill up my calendar with ‘private meetings’, and send out emails. Automated mouse movements also keep my Microsoft Teams status green, making it look like I’m hard at work. This is all against the rules, but it saves me hours. Right now, I’m taking Fridays off entirely.

After a close call, I also wrote a programme to send a notification to my phone whenever someone from work phones and I’m not anywhere near my company laptop, giving me the option to message them back saying ‘Give me 15 minutes and I’ll call you back’ or ‘I’ll drop you a call on Monday’.

Normally I spend my non-working work time on personal projects, building things that are actually useful. One of the things that I’m most proud of, that I’ve been working on for over a year now, is a website where you can create Spotify and Apple Music sessions, and anyone, no matter where they are, can add songs to the playlist that’s playing at that moment. I’ve been doing that pretty much 100% on company time. Now my weekends are completely free to relax. It feels great. 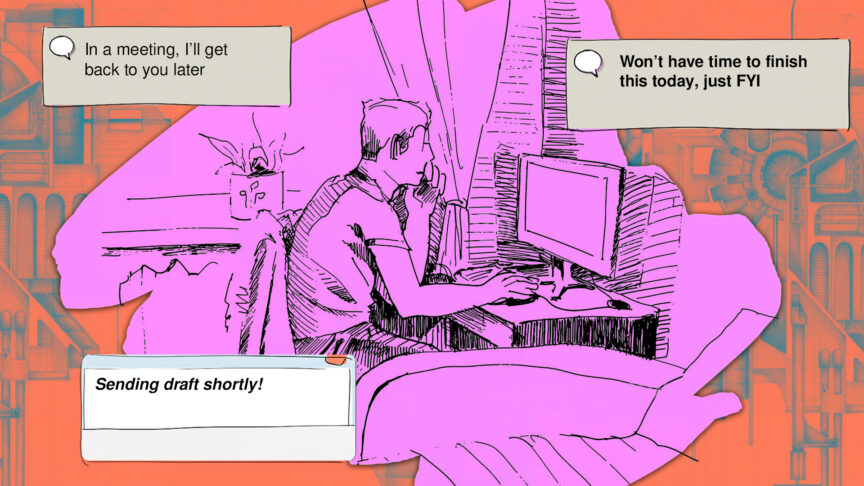 I’m an architectural assistant, working for a big practice. Day to day, my job involves producing drawings and models for different designs.

There’s definitely a culture of overwork in the architecture world. It’s a bit of a horse race – if one person is working late, everyone feels they have to work late. There’s also a culture of overworking the underlings, often unnecessarily. In the office, I’d often work during my lunch break or in the evening, and the stuff I’d been working on wouldn’t even get used.

If I had to give a percentage, I’d say that about 30% of my job is bullshit. That’s partly because of the nature of design work – you need to test lots of different designs, of window iterations, for example. When I’m working in the office, my boss will often be walking around and want to see 12 different options at the drop of a hat.

During lockdown, I was asked to do even more unnecessary work than usual – even though there should have been less to do. In the office, the last four hours before a deadline are spent printing – which we didn’t have to do during lockdown because we were submitting all our drawings digitally. It would have been nice for my boss to say, ‘actually, seeing as you’ve been working so hard recently, take some time off.’ Instead, we were asked to do more drawings that probably didn’t need doing.

Despite this, I did find ways to reduce my working hours during lockdown, to the point where I was only working two hours a day. I started getting all my drawings done in the first couple of hours each morning, saving unfinished versions of them and then sending ‘updates’ to my manager throughout the day, pretending I was still working on them. I’d save a copy with just the lines, then one with a bit more detail, then one with the colouring, and then the final one. I also sped up how I worked and started submitting drawings I never would have previously. In my profession, you can work 13 extra hours a week and get just one hour off in lieu, so it felt like I was claiming some of my time back for myself. It felt like vengeance.

I’m going back to the office with a different approach after lockdown. Working from home definitely gave me perspective on what parts of my job I actually need to do and what I can get away with not doing, so I’m not running myself into the ground for no reason. It’s not worth the stress – I’m not paid enough for that. That’s the attitude I’m going back with. 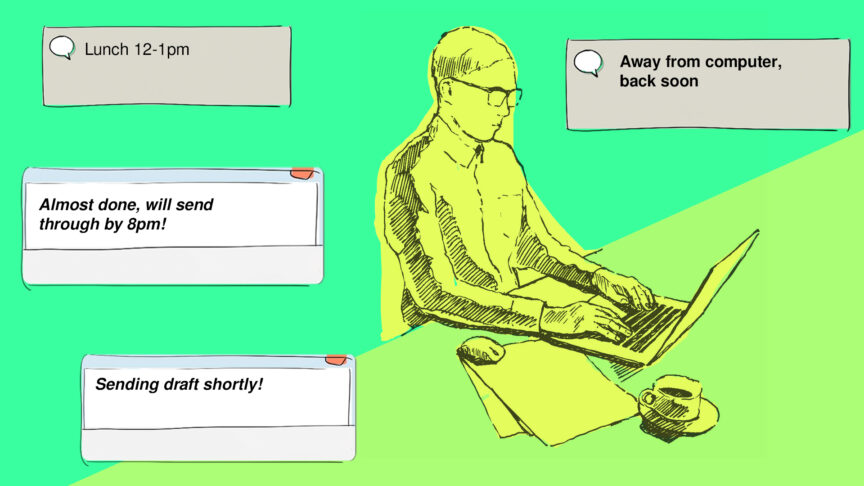 I’m a strategic change analyst. My job is basically call centre resource management – working out how many people my company needs on the phones to respond to any kind of change.

My job is 90% bullshit. I don’t work in HR, exactly – I just jockey spreadsheets to work out how many bums on seats we need. Most of the senior managers don’t think my department is important because our work never ends up informing decisions anyway. If an executive decides we’re doing something, we do it – regardless of whether or not it’s been costed out or will worsen customer service. I guess that’s one of the reasons my department is being gutted soon.

Recently my work has really slowed down, to almost a complete stop. Half the reason for this is that we’re being made redundant. But half is also because we’ve been working from home instead of in the office.

When you’re in the office, there’s no motivation to finish your work quickly, because when you do, what are you going to do? More work. But if you’re at home, once you’re done you can go out into the garden, start watching TV – any number of things that are infinitely more pleasurable. It becomes about getting the job done rather than being present for a set amount of time.

In the office, there’ll also always be someone who’ll make a song and dance about how they’ve been working extra hours. People want to be the first in and the last to leave. There was even someone in my office, some fricking jobsworth, who told my manager if I was late in or left early. Nowadays, if I’m 15 minutes late to my desk – or even if I take the afternoon off altogether – no one knows or cares.

At the start of lockdown, I was getting away with doing an hour’s work a day if I was lucky. I’d log on on time, reply to emails and attend meetings, but otherwise I’d just get through my work as fast as I could. Sometimes I’d send an email at 8pm so it looked like I was working late, but most of the time my piss-taking was more spontaneous.

I’d like to say that during this time I took the opportunity to improve myself, but I didn’t. I played Xbox a lot, got into Twitter wars and spent time with my kids. I also do the school runs now, which is around an hour and a half out of my day every day. I haven’t cleared that with anyone – I just started doing it.

I think moving back to an exclusively office-based job would be very demotivating for me now. Thankfully, the majority of job postings I’m seeing offer some degree of flexibility when it comes to working from home. If that’s one good thing to come out of the pandemic, that’s great.

Clare Hymer is a commissioning editor at Novara Media.

Report: ‘How Can I Use This, Rather Than It Use Me?’ A New Campaign Takes Aim at Screen Addiction

During lockdown screen use increased by a third, with many now blaming their scattered attention spans and deteriorating mental health on the overuse of mobile phones and computers. A new campaign argues we should reset our relationship to technology.

Opinion: Rising Unemployment Is Making Us Depressed. But We Are More Than Our Work

Pandemic-driven unemployment has shown that basing our self-worth on our productivity is unsustainable. As we emerge from a year of lockdowns, we must rethink our relationship to work, writes Harriet Williamson.

Report: Paranoid Bosses Are Spying on Workers During the Pandemic

As home working has increased during the pandemic, so has worker surveillance. Rivkah Brown reports on the growing number of bosses now spying on their employees.