TERFs Don’t Speak for Women – But Don’t Take It From Me, Look at the Polls

Perhaps we aren't marooned on TERF Island after all.

Eleven years ago in October, the Equality Act 2010 became law. Intended to update old equalities legislation, the act also included a new provision: it made it illegal to discriminate against somebody on the basis that they are transgender.

Trans-exclusionary radical feminists (TERFs) often justify their opposition to trans rights by claiming to speak on behalf of a silent majority, particularly a silent majority of women; meanwhile, Labour MPs argue that politicians who focus on trans issues are “out of touch”. Polls suggest the opposite.

Whilst a stubborn minority of transphobes continue to fuel rising discrimination against trans and non-binary people, they are just that: a minority. When you look at the data, what you find is that trans rights – from basic sympathy for trans people to support for self-identification and toilet access – have clear support across society, especially amongst women and young people.

Perhaps we aren’t marooned on TERF Island after all.

What do Britons actually think about trans people?

Firstly, despite trans people making up just 1% of the population, 33% of Britons surveyed by YouGov in 2015 had met someone trans. That familiarity may well have contributed to Britons’ comparatively progressive attitudes towards gender.

Over 40% of Britons see gender as a social construct based on sexist stereotypes. Nor is this belief purely theoretical: polling this February showed that 45% of British adults (and 52% of women) think that the most legitimate way to define a person’s gender is “the gender they identify as now”; just 17% think it should be defined by your anatomy at birth. 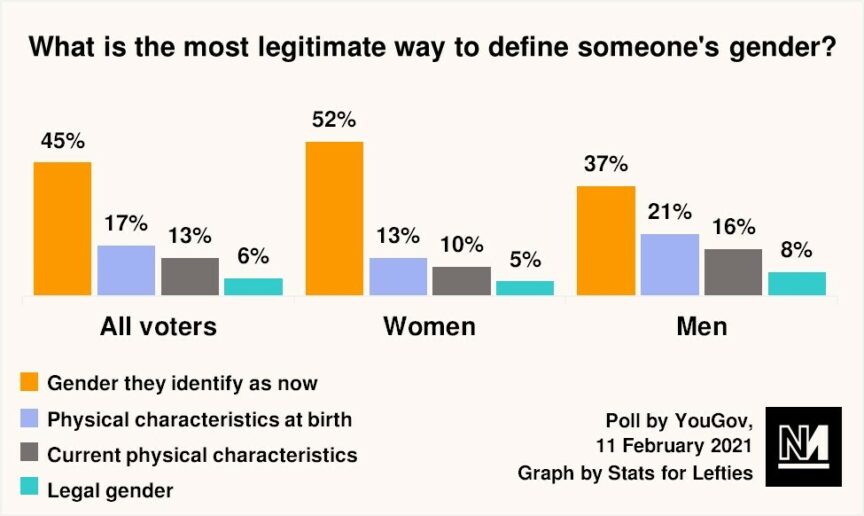 The public also believes that trans women are women: 51% agree, with a third (and significantly more men than women) disagreeing. 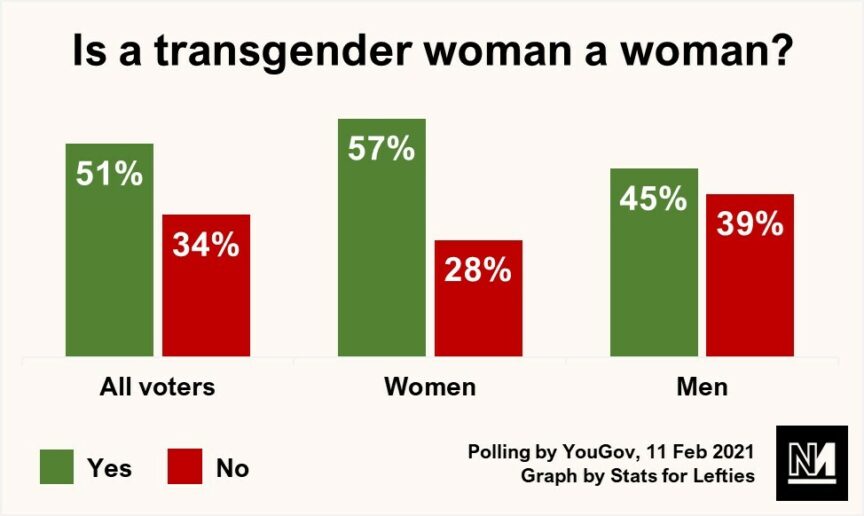 Not only is the British public supportive of trans people, they are also aware of the struggles trans people face. The most recent polling by SavantaComRes shows that, by a 16-point margin, the public (including 50% of women) believes that transphobia is a problem in the UK. 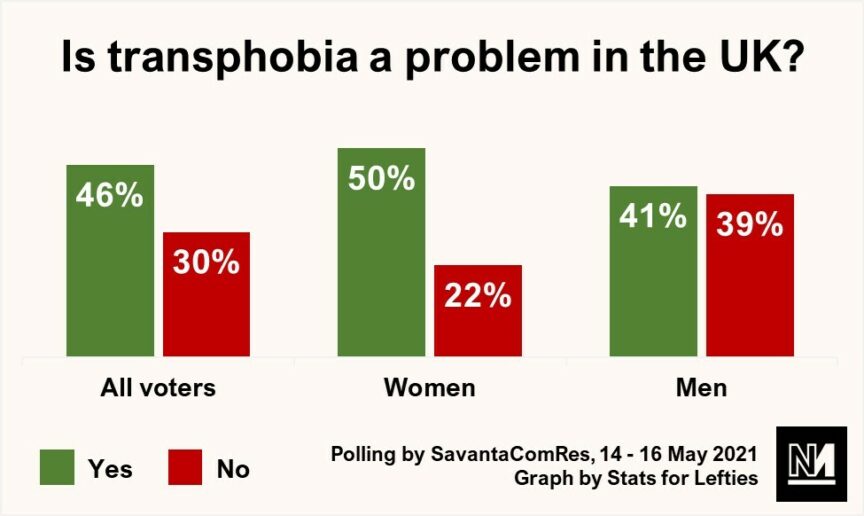 Perhaps because of this, Britons actively want politicians to help trans people: a 2017 YouGov poll found that British people overwhelmingly support strengthening equalities legislation to ban discrimination against them.

Sure, but do Britons want pro-trans policies?

It’s easy to find polls where people express sympathetic sentiments when asked about trans people in general terms. But what does the public think about specific policies that benefit trans and non-binary people?

One of the biggest complaints raised by transphobes relates to toilet access. When arguing for the exclusion of trans women from women’s toilets, TERFs often argue that they’re defending the majority of women. But while they kick up a stink, the rest of us are quite relaxed about the issue: a June 2020 YouGov survey found that by a margin of 16 points, Britons believe trans women should be able to use women’s toilets. 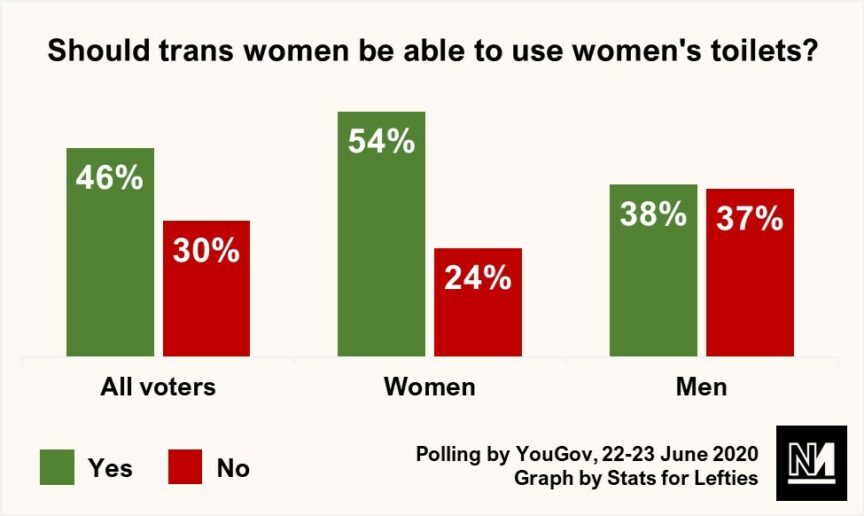 Amongst women, support is even higher: 54% support trans women’s right to use the toilets that match their gender, with just 24% opposed. In other words, the bulk of opposition to the idea comes mostly from people who don’t use women’s toilets anyway.

This pattern extends to another frequent source of tension in discussions of trans rights: women’s refuges. The public as a whole (47%) and women in particular (53%) back trans women’s access to them. 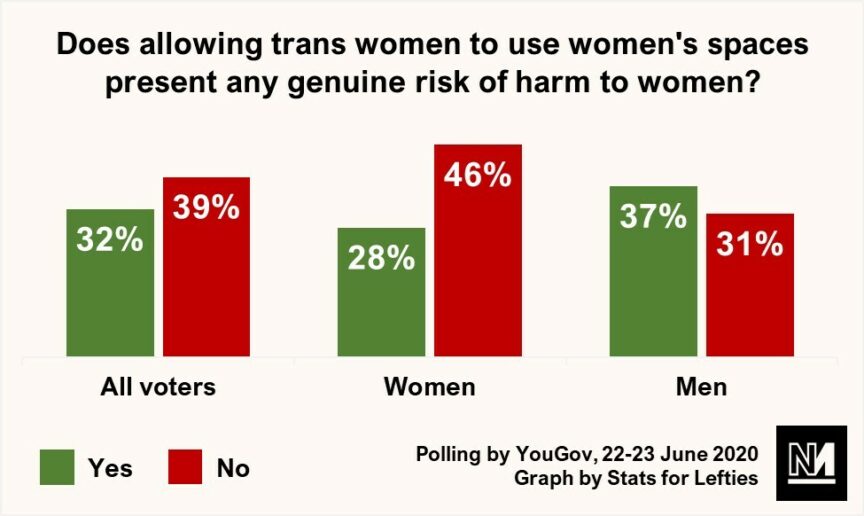 However, the issue of self-identification – whether trans people should be able to change their legal gender without bureaucratic obstacles – remains contentious. The polling is mixed. In general, the public – and women in particular – support the principle that a person should be able to self-identify as a gender different to the one they were assigned at birth. 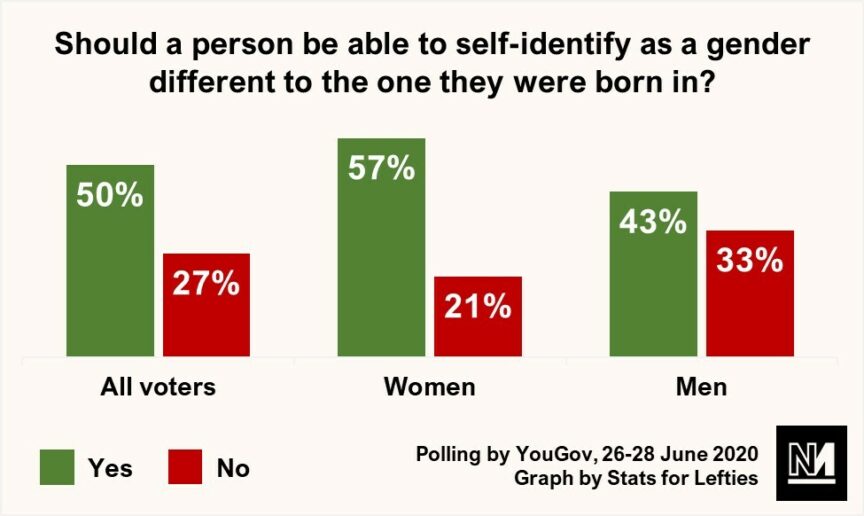 However, when the current process of changing legal gender is outlined to them, British people tend to think trans people should have to present evidence to a panel and seek a doctor’s approval – as they do currently – in order to legally change their gender. In my view, this is because most people lack personal experience of this process, which on paper sounds simple, but in practice, is time-consuming and complex. That said, it is still disappointing to see and I hope voters can be convinced to support a change to the process.

When the government scrapped plans to allow self-identification for trans people last year, the Labour party remained largely silent; the party “has sought to avoid being dragged into the debate over trans rights,” reported The Times. This would imply that trans issues are somehow divisive, but in fact, they are anything but: in the 2017 YouGov poll, 61% of people (including 67% of women) said that they would be “proud” to vote for a party on the basis that the party backed a ban on anti-trans discrimination.

As we have seen, Britons are broadly supportive of trans rights. They think trans women are women, that trans people should be able to use toilets that match their gender, and that transphobia is a real problem in our country. This holds true of the red wall, despite its routinely being painted as a reactionary backwater.

Transphobia is real, and on the rise in the UK. But when transphobes claim to speak on behalf of a silent majority we must be forthright in pointing out that they do not; and that when politicians neglect trans issues, they’re not executing the will of the people, but defying it.

Framing the 'trans debate' as a culture war obstructs discussions about the political changes we must make to actually improve the material conditions of trans people and cis women alike, writes Aimee Armstrong.

Around 1,500 people gathered in central London on Saturday for the city's first Trans Pride. We talked to attendees about why trans rights need to be centre stage.