Has the Pandemic Shifted Britain Left?

Don’t get too excited, the revolution isn’t upon us just yet.

On Monday, prime minister Boris Johnson announced the end of most of England’s Covid-19 restrictions on what he and others hailed as “Freedom Day”. Cringeworthy as it is, the name acknowledges that the pandemic has had – and will continue to have – an enormous impact on how we live.

Many on the left have assumed lockdown – with the massive state reliance it has required – would have an equally enormous impact on how we think. Even the Financial Times has argued that “the left is winning the economic battle of ideas” as we emerge from the pandemic.

But while it’s true that in some areas views have changed, in many areas they haven’t.

The clearest instance of this is welfare benefits. During the pandemic, millions of people began claiming Universal Credit for the first time, as unemployment skyrocketed and wages remained low. But despite this massive expansion in the number of people receiving benefits, public opinion on them has remained virtually unchanged. In December 2019, 34% voters felt that benefit payments were too low, 17% that they were too high. In June 2021, these figures are practically the same. 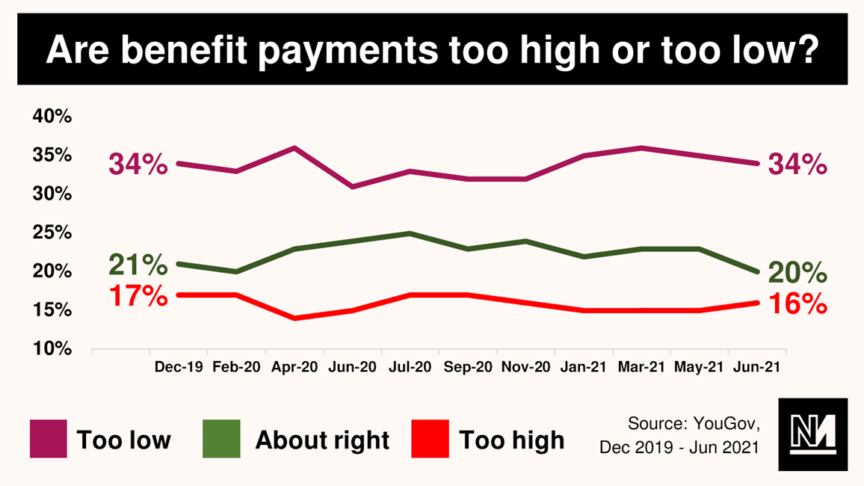 Another issue you’d expect the pandemic to have shifted us on is that of housing. With most of us stuck at home for over a year – 36% of us in precarious rentals – and homelessness rising, one would think that voters would be demanding home-building. Quite the opposite. Since December 2019, support for building more homes has plunged by ten percentage points, with opposition rising by the same. 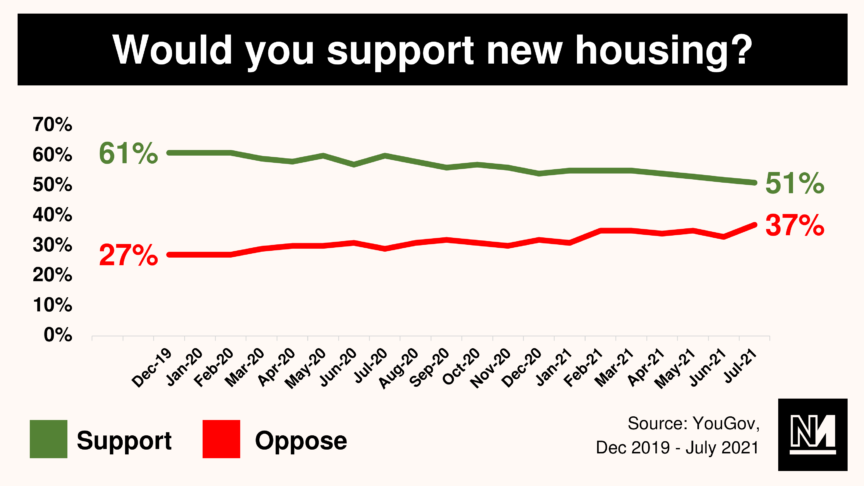 An issue one might have also expected voters’ to feel more strongly about as a result of the pandemic is the climate crisis. It’s arguably one of the factors that precipitated the pandemic, though voters do not seem to recognise this: in fact, the public is actually less keen to see action on the climate crisis than they were before coronavirus.  Incredibly, the percentage of voters who think the government is doing too much to combat the climate crisis has risen. 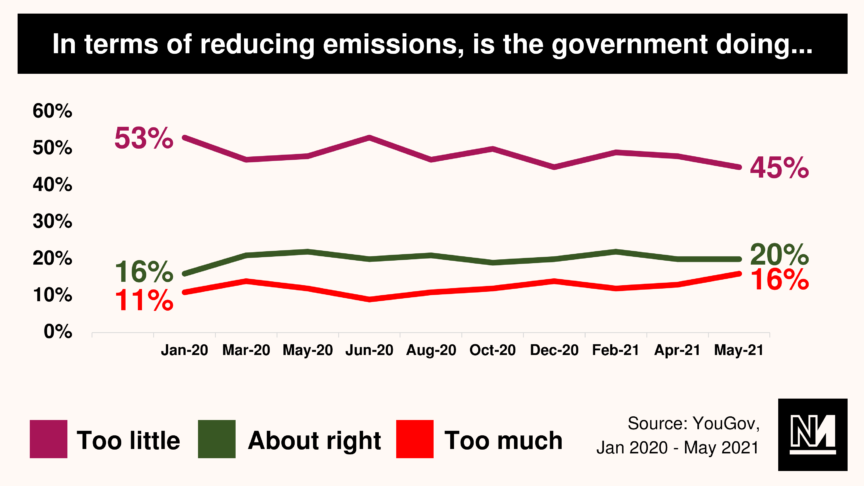 Perhaps the most shocking issue on which Britons have been intransigent despite the pandemic is the NHS. Perhaps this is because support for the health service started pretty high: 69% of Britons backed a public NHS in December 2019, 71% do now.

What’s concerning is that there’s been no noticeable increase in the percentage who back public ownership of the NHS, the very thing that has facilitated the excellent vaccine rollout. Meanwhile, fewer voters wanted an increase in NHS spending in June 2021 (71%) than they did in January 2020 (75%), despite Britons being more concerned about healthcare than they were in 2019.

Yet there are glimmers of hope, instances where the pandemic appears to have changed minds for the better. Take the four-day week. Before the 2019 election, just 38% of voters thought the policy was a good idea. Now, after 16 months many have spent working exclusively from home, 55% of us do.

This should not be a surprise. During the third quarter of 2020, the UK’s labour productivity rose to its highest ever level. Having greater flexibility has been demonstrably good for our work – and we’ve noticed.

We’ve also noticed that, while we’ve been stuck in cramped houses toiling to make ends meet, big business has boomed. In that same third quarter of 2020, UK corporate profits rose to a stunning £118.6m, the highest on record; Amazon alone saw its profits rise 35%.

No surprise, then, that voters increasingly think that these corporations should pay for our pandemic recovery. In July 2019, 34% of us supported an increase in corporation tax. Now, 44% of us do. 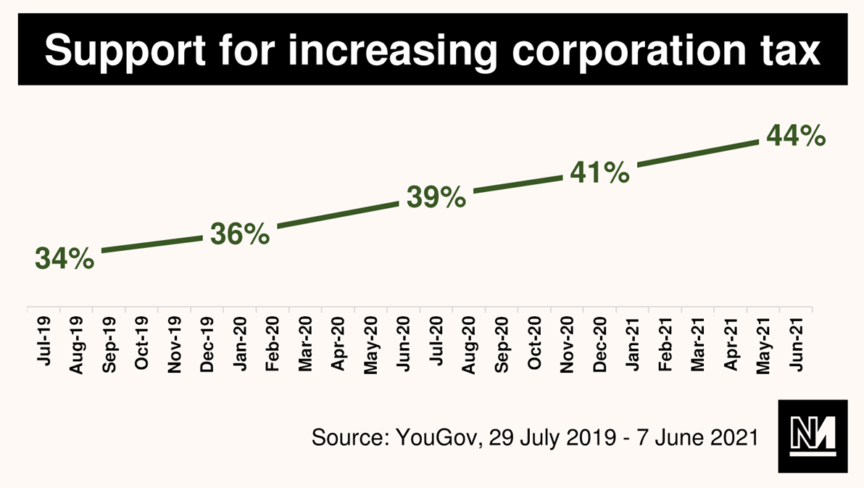 The pandemic has not just reshaped our opinions on taxes, however. Broader social issues have also come to the fore, in particular – thanks largely to the Kill The Bill and Black Lives Matter movements that have gained momentum during the pandemic – the issue of policing. 36% of voters – including 55% of young people – now believe that the Metropolitan Police is institutionally racist, up from 25% in October 2019.

The pandemic, then, has not had a transformative impact on public opinion. On some issues (such as public spending and four-day weeks), there has been a slight shift to the left, but on others (such as housing and the climate crisis) there has been a slight shift to the right. I would speculate that this is because the pandemic has focused voters’ minds on their own personal experiences of the pandemic, with issues they can’t as easily relate to – such as the climate crisis – waning in importance.

What can we learn from this? To my mind, the biggest lesson is that the pandemic has presented clear opportunities for leftists, even as it has left public opinion on many issues unchanged. Yet even that doesn’t mean we should lose hope, but a reason to redouble our efforts to articulate our vision of a fairer world; the shift in attitudes towards policing during the pandemic has been largely the result of leftist organising.

In other words, we don’t need to wait for external events like pandemics to create the conditions for a better world – although when that does happen, we should be ready to maximise those opportunities – we need to go out right now and start building it.

Boris Johnson seems to think that cutting the £20 uplift to universal credit will enable him to create high-paid jobs, writes Andrew Fisher. He's living, as Adam Curtis would say, in a dream world.

There’s something liberating about seeing your views as changeable rather than as an extension of yourself, writes Rachel Connolly.

The overrepresentation of trans-hostile voices in the media means we’re denied a realistic view of the issues facing trans and non-binary people, writes Ash Sarkar.