My Community Helped Me Resist Eviction. Now the Council Wants to Move Me Away

'Keep fighting. Don’t do what you're told. Shame those in power.'

When Nadia Zaman and her three small children were due to be evicted in Walthamstow last month, around 80 people gathered to support them. The eviction resistance bought Zaman some time, but now – having been temporarily rehoused in one room in Leyton – she is facing the choice between moving 170 miles to Stoke-on-Trent, or homelessness.

Zaman spoke to Sophie K Rosa about how she has rallied support in her community to fight for a secure local home, against a council attempting to wash its hands of her family.

I was born in Walthamstow and have lived here all of my 38 years. My whole life is here: my family, my friends, my children’s school. I used to have my own sweet stall in the market. The community in Walthamstow is amazing: when you need someone, they’re there – in good times and in bad. Regardless of who you are and what your background is, people will stand up with you.

I had lived in my last home – from which I’ve recently been evicted – since 2014; it was privately rented by me and my ex-partner. Shortly before the pandemic, my partner walked out on me and the children, and I could no longer afford to pay the full rent. I was sent an eviction letter, and packed my bags – but then the pandemic hit, and they introduced the eviction ban.

As soon as the eviction ban was lifted this year, I got a letter from the bailiffs, giving me twenty days to move out. I was really upset and didn’t know what to do at first. Then I began to contact everyone I could think of: not only local councillors, but local people I had met over the years who I thought might be able to help me. Someone suggested I join the London Renters’ Union (LRU). We started WhatsApp groups to help us organise and had meetings in parks. On the day of my eviction, around 80 people turned up, including the press. My story was all over Twitter. I got so emotional: there were all kinds of people there to support me and my kids.

The bailiffs didn’t come, and I got a phone call from the council saying that instead of forcing me to move almost 200 miles away, as we had feared they would, they would offer me a single room in temporary accommodation in Redbridge. They gave me a couple of days to decide whether to accept or else, they said, their duty to me would be finished.

The day following the eviction resistance, I picked my children up from school, dropped them at my mum’s, and me and my sister went to visit the Redbridge room. The room had a wardrobe with a broken mirror and one mattress. The house had ten or eleven bedrooms with single people staying in them. There was a cigarette in the bathroom and a note on the fridge telling people to stop stealing each other’s food. Near the kitchen sink, I spotted two mouse traps with dead mice. The estate agent showing us around said he wouldn’t bring his children to stay in a house like this. After the visit, I felt sick. I couldn’t eat anything that night. I sent all the photos I had taken to the press. 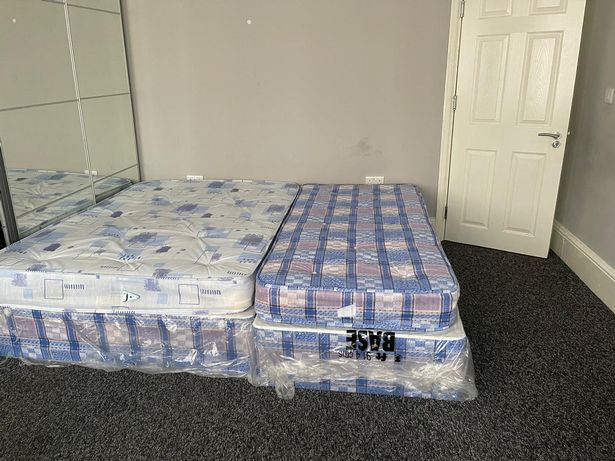 The room Zaman and her children were offered. (Nadia Zaman)

Before then, I didn’t feel confident talking to the press – but after seeing that room, I had full confidence: I wanted people to know my story, to know what the council does to people. After I did one interview with the local press, the journalist told me that Waltham Forest Council had cancelled the room in Redbridge, and that they’d apologised for even offering it to me. I didn’t get an apology myself – I feel they were just trying to cover their backs in the press. With the support of LRU, I got a meeting with local council officers. But they told me they weren’t the decision-makers for my case, and I still haven’t been told who is.

After this, they offered me a room in Leyton, where I’ve been living for three weeks. I am sharing the bedroom with my three children, and we share the house with seven strangers. The house has one bathroom and one kitchen. We’ve been here for three weeks during the heatwave and the school holidays. I’ve coped, but it’s been awful. I know there are empty homes in Walthamstow, including council flats.

Last Thursday I got an email from a councillor saying that they’d found a property for me – in Stoke-on-Trent, 170 miles away. They said I had to leave my room the next day, and that I had 24-hours to accept the house or they would no longer be responsible for me. They said they’d pay for my travel; I thought they meant so I could view the house, but they meant just a one-way ticket to Stoke. How could they send me and the children to a place I’ve never been?

I’ve told the council I’m not moving. I need and deserve to stay with my community, who are continuing to support me as the council threatens to change the locks on my room and discharge me out on to the streets. The council knows exactly how much me and my children have struggled and have overseen it all; they’ve broken my heart and not done anything for me. It’s cruel. But I feel so supported by my community – the community they want to chuck me out from. By pressuring me to leave the area, they’re trying to wash their hands of me and remove me from my support network.

Through this struggle, I’ve learned that Waltham Forest pushes far more homeless people out of the borough than other London councils. I’ve learned that this disproportionately impacts women and people of colour. I don’t understand why they aren’t doing more to support families like mine.

To other people in my position, I want to say: keep fighting, don’t do what the council tells you to do, get support from your community, and shame those in power. The council might think they can get away with quietly washing their hands of vulnerable people without support networks by forcing them to move far away, but I want people to know that there is support out there. Contact me. Contact local political groups. Contact the London Renters’ Union. Contact journalists. There are so many people who are out there who can help you.

When all this is over, I want to get into local politics. I don’t want anyone else to go through the trauma that me and my children are going through. I want the government and the Labour party to take action on cases like mine. What are MPs doing about homelessness?

Report: A Group of Renters Just Won £19,000 From Their Billionaire Landlord – And They’re Just Getting Started

In a historic victory for renters everywhere, Somerford Grove Renters successfully sued their lawyered-up landlord and are now preparing dozens more suits. If successful, they stand to win half a million pounds. Rivkah Brown reports.

Report: An Eviction Crisis Looms. Can Renters Resist It?

A month after the eviction ban ended, renters’ unions are all that stand between some tenants and homelessness. Eloise Barry reports.

Report: A Filipino Nurse Is Being Evicted for Having a Less “Durable Connection With the Area” Than Her Landlord’s Daughter

EXCLUSIVE: The care home nurse and her two sons are the latest victims of a state that recently declared itself racism-free.