Few PMs have bounced back from -29.

Four weeks ago, I wrote in this column that although politics changes quickly, I still expected Boris Johnson to bounce back from the latest sleaze scandal. That prediction did not age well.

The prime minister is now embroiled in his most damaging controversy to date, with his poll numbers tumbling and his party in chaos. What happened?

Earlier this month, the Daily Mirror reported that two parties with around “40 to 50” people had been held in Downing Street in the run-up to Christmas – despite government restrictions on such gatherings being in force at the time. This was followed by the unveiling of a recording showing Johnson’s COP26 spokesperson Allegra Stratton joking with Number 10 colleagues about the alleged gathering (she resigned shortly after the video was leaked). Then last week pictures emerged of Johnson hosting a Christmas quiz.

The public’s reaction has been swift. Multiple polls showed clear majorities of voters thought Boris Johnson should resign, Labour surged ahead in the polls and the Tories lost the North Shropshire in a stunning defeat. After all this, Johnson’s departure within the year might seem guaranteed.

Of course, it isn’t. As we have seen, Johnson has survived multiple scandals. What’s more, it’s not at all clear that his potential successors would be any more electable. Finally, the underlying data indicates that Labour’s lead is driven more by Tory voters’ apathy than by any great desire for a Starmer government – suggesting that this is a temporary setback, rather than a pivotal moment.

Looking at the data, though, it’s easy to see why Tory MPs are panicking. From an average lead of 11 points following the local election sweep, the polls have shifted to show Labour ahead by 4 points, the largest Labour lead since mid-2019. 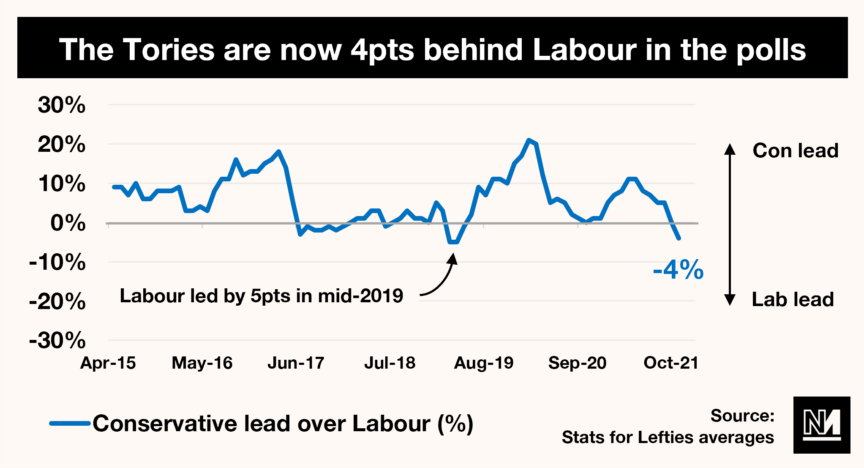 Whilst this would not be enough to gift the opposition a majority, the Tories would be reduced to just 265 seats – nowhere near enough to govern, even with the DUP’s backing. Despite averaging 44% in mid-2021, the Tories’ vote share has now tumbled to 33% – fewer votes than the party won in 2005, when they won just 198 seats.

This polling is already bearing bitter fruit for the Tories. In the Old Bexley and Sidcup by-election, the party’s vote share fell by 13 points; in North Shropshire’s contest, it fell by an astounding 31 points.
We’ve seen the Tories face difficulties before: they lost Chesham and Amersham back in June. But unlike previously, Boris Johnson has not been insulated from public discontent. His approval rating has now fallen to -29 (his previous worst was -19 in November). Keir Starmer now leads in ‘best prime minister’ polls with the biggest lead of any Labour leader since 2007. 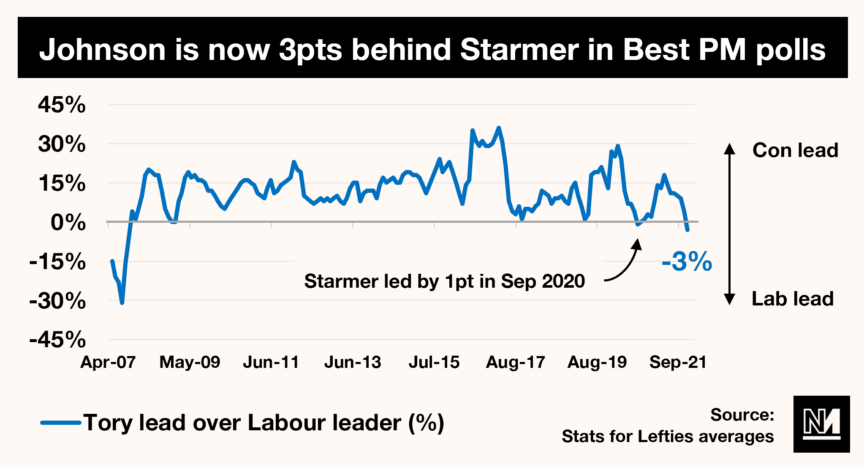 Beneath the surface, these numbers are even more concerning for the Tories. Amongst over-65s, Boris Johnson’s net approval rating has declined from 0 in October to -23 in December. Whilst some of these voters might not swing to Labour, they may well get behind Reform UK (the successor to Farage’s Brexit Party) – and indeed, the results in Bexley, where Reform UK won 7%, indicate that many are already doing so. Older voters were key to the Tories’ victories in 2017 and 2019, so without strong support from them, the Tories will face serious difficulties in 2024. 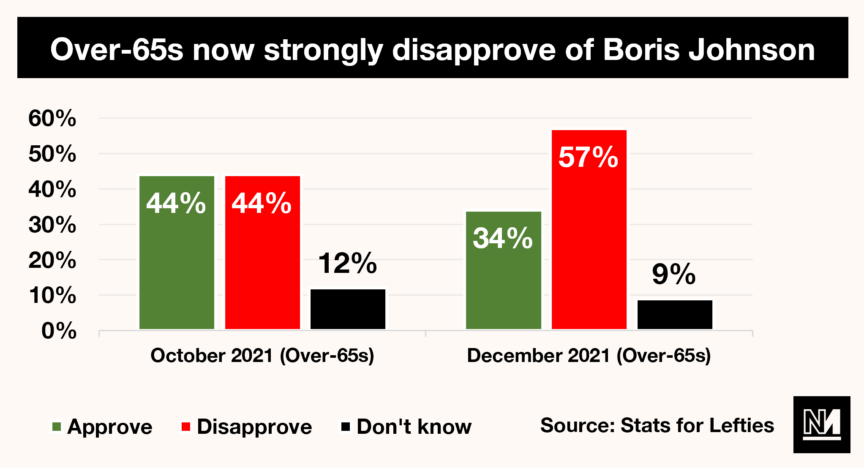 Given all of this, it is easy to see why many expect Johnson to be gone within the year. The Conservatives have tended to swiftly remove leaders as soon as they come to be perceived as unelectable: Margaret Thatcher was ultimately forced out by her party when the poll tax damaged her popularity; Iain Duncan Smith was removed after repeatedly struggling in polls; and Theresa May resigned soon after losing 1,300 council seats. Yet there is little precedent for a leader being forced out by his own party just two years after winning a massive majority.

Whatever Johnson’s present difficulties, he is, unlike May and Duncan Smith, a proven winner – not only in 2019, but also in the 2021 local elections. The Tories now hold 30 of 39 police commissioners and more seats in the Welsh Parliament than ever; the constituency of Hartlepool swung to them easily in May, and they came within 300 votes of winning Batley and Spen in June.

What’s more, Johnson, thanks to his decades-long political career and high-profile mayoralty, has almost universal name recognition. YouGov polling shows that 91% of the public has an opinion of him, compared to 82% for Priti Patel, 79% for Rishi Sunak and 48% for Liz Truss. Even the once-adored Sunak has seen a significant dip in his popularity; from a net favourability of +49 in March 2020, the chancellor’s net rating has declined to a fairly disappointing -3. Johnson might be disliked at the moment, but he is a known entity who has proven his political resilience time and time again. Can the same be said for Rishi Sunak? 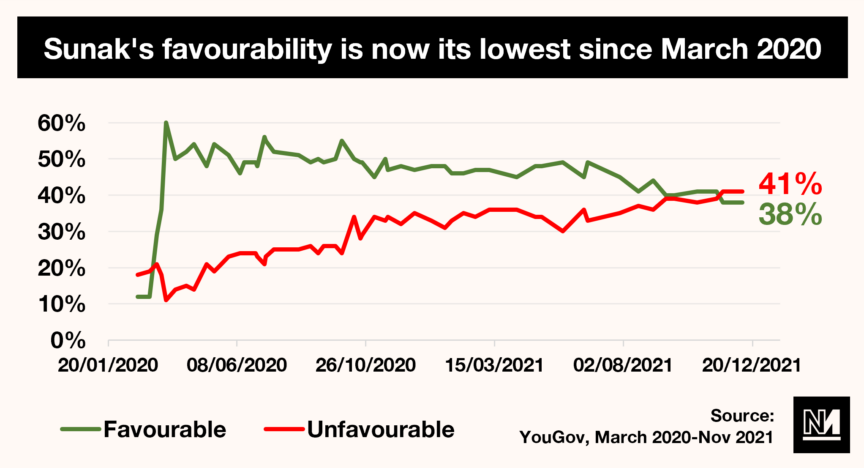 Although Labour leads in the polls, a significant number of Tory voters are not switching to Starmer. Instead, they are shifting to the “don’t know” column or backing Reform UK. This would suggest that many Tory voters are dissatisfied with Johnson at this moment in time, but still lean to the political right and could be won back with the right message.

Yet for all that, it’s hard to avoid the conclusion that we are looking at the last months of Johnson. The Tories have historically shown little patience for leaders who become unpopular, and losing one of their safest seats is likely to make many Tory MPs determined to force Johnson out. Few politicians recover from approval ratings as disastrous as Johnson’s, and if next year’s local elections go badly for the Tories, Johnson is unlikely to get the chance.

For a Conservative PM to be forced out by an alleged Christmas party may seem farcical – but in politics, the smallest things can lead to dramatic defeats. In the 1990s, for instance, Canadian prime minister Kim Campbell ascended to power to wide approval. Yet after a series of gaffes, Campbell led her party to the worst defeat of any government in Canadian history, losing 167 of 169 seats.

Johnson probably won’t go out with as much of a bang. But as North Shropshire has shown, there’s no limit to how low the Tory vote can go – and with Johnson’s popularity edging ever closer to the catastrophic figures achieved by May in mid-2019, his future is not as certain as it once seemed.

Analysis: The Right Is Destroying Our Freedom and the Left Is Letting It Happen

With a nationalist far right resisting pandemic controls and progressives clamouring for them, the left needs a coherent response to metastasising state power - and fast.

Analysis: Is Britain Ready for the Omicron Variant?

With impressive vaccination rates and a public willing to accept some new restrictions, the biggest stumbling block to tackling the Omicron variant is the government's lack of political will, writes Ell Folan.

The past month has been one of the worst for the Tories to date. Ell Folan examines the polls to ask whether this is another passing storm, or something more serious.