The history of the slave trade was integral to the defence case.

“The consequences of your decision will reverberate around the city, the country and indeed the world. I urge you to be on the right side of history.” These were the powerful words spoken by defence barrister Liam Walker QC in his closing statements to the jury in the trial of the so-called Colston four last week.

The group faced criminal damage charges for their involvement in the toppling of the statue of Edward Colston, a prominent 17th-century slave trader, in Bristol during a Black Lives Matter march in the summer of 2020.

Armed only with ropes, strength and sheer power of will, the protesters managed to achieve in a matter of hours what countless petitions had failed to do. The contentious bronze statue had weathered decades of protest calling for its removal and had come to symbolise Bristol’s difficulties in reckoning with its history and involvement in the transatlantic slave trade.

What was remarkable about the case was that the four did not contest that they had taken part in toppling the statue, nor did they contest they had played a role in its dumping in Bristol harbour. They were also clear that their actions were motivated by sincere anti-racist principles.

Instead, they invoked the historical and political context of Colston and Bristol’s role within the slave trade to mount a sophisticated legal defence that argued removing the statue did not amount to criminal damage.

The group’s principled stance and holistic defence ultimately paid off, with the jury delivering a not-guilty verdict in just under three hours.

On hearing the news, the public gallery, probably the most packed-out in Bristol’s crown court’s history, erupted in a barrage of cheers, stamps and hugs. Outside the courtroom, one of the four, Sage Willoughby emerged, taking the knee and raising a fist in the air. “This is a victory for Bristol, it’s a victory for racial equality and it’s a victory for anyone who wants to be on the right side of history,” he told the crowd, to uproarious applause. 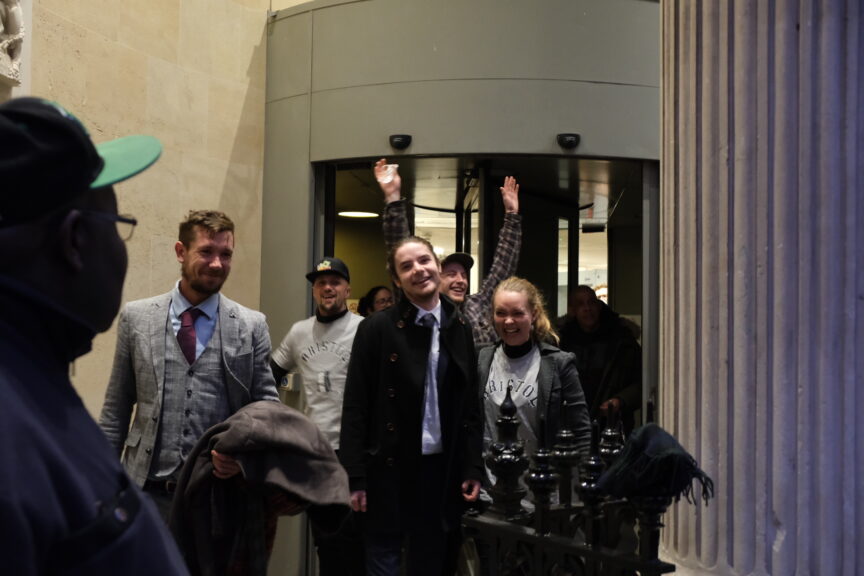 The ‘Colston 4’ emerge from court after their not-guilty verdict. (Isabell Jeżek)

In recent days, we have seen Conservative MPs and rightwing commentators willfully misrepresenting what the case was about and what the verdict means. They have made so much noise that on Friday the attorney general, Suella Braverman, said she was considering referring the case to the court of appeal.

The right is arguing that what should have been a straightforward legal matter for the jury was compromised by political ideology, setting a worrying legal precedent. (Nevermind that juries cannot even set precedents).

We undermine the rule of law, which underpins our democracy, if we accept vandalism and criminal damage are acceptable forms of political protest.

They aren’t. Regardless of the intentions. https://t.co/JsOj0kNgWq

If the right is to be believed, the only reason the four achieved their not guilty verdict is because of a blatant misunderstanding of the concept of criminal damage. Writing to Braverman on behalf of the “anti-woke” Common Sense Group of Tory MPs, John Hayes argued the jury was “certainly devoid of understanding the definition … if you damage, destroy or deface property without permission, you are guilty by definition.”

But it is Hayes, in fact, who is misunderstanding the principle. As the Secret Barrister explains:

“For a charge of criminal damage… the prosecution has to prove the following:

Between them, the defendants challenged the charge on all four grounds – though they were only unanimous on one.

What the case really turned on was that idea of “lawful excuse”, with the four defendants united in the contestation that even if damage had been caused to the statue, that damage was not in fact unlawful.

In making this case, the group held that the public display of the statue was itself a crime – firstly, on the grounds that it was an “indecent display, contrary to section 1 of the Indecent Displays (Control) Act 1981”, and secondly, “that there was an offence of displaying a visible representation which is abusive, within the sight of a person likely to be caused distress by it, contrary to section 5 of the Public Order Act 1986.”

It was on these points that the political and historical context of Colston and Bristol became integral to the case, with historian Professor David Olusoga, taking to the stand to give a detailed history of slaver Colston’s violent, racist legacy. Olusoga detailed Colston’s role as the deputy governor of the Royal African company – the most prolific slave-trading firm in Britain’s history – which shipped 84,000 Africans into slavery, and “transported more Africans into slavery than any other company in the whole history of the slave trade in the north Atlantic.”

Barrister Liam Walker emphasised his involvement, telling the court: “Edward Colston directed, revelled in, and refined the slave trade for profit. He kidnapped humans, taking them away from all that they loved and what was familiar to them, and sold them as commodities. He thrived, living a long and comfortable life; amassing a considerable fortune.”

Compelling testimony also came from Lloyd Russell, a Black community leader, who spoke of the racism he had faced as a child in Bristol’s school system. He said that Black voices were not recognised in and by the city, and argued that the statue was a physical representation of this neglect – “an embarrassment and disgrace to the city.”

Using these testimonies, the defence was able to make a compelling argument for why the statue’s public display in a city that counts over 25,000 Black people in its population was abusive and could reasonably be assumed to cause “distress”.

Willoughby told the court: “I will put it to you this way, imagine having a Hitler statue in front of a Holocaust survivor; I believe they are simultaneous in their insult.”

They put up monuments to these slave traders; these mass murderers.

Under the Police, Crime & Sentencing Bill if your protest damages a monument to one of these murderers you face 10 years in prison.

The irony is that while the legal defence was sound, it is the Conservative government that has weaponised the case to further a political agenda. “The huge significance the government has put on this trial is quite astonishing,” explains Raj Chada, barrister for the four. “We know it has led to it putting into the Police and Crime Act new legislation which says that if you damage a monument, you can serve 10 years in prison.”

Chada also points out that there is evidence of contact between Patel, the crown prosecution service, and Avon and Somerset police in relation to the case. “What we don’t know is what it was, and how often. It goes against all constitutional conventions for a politician to be involved in an ongoing case in this way.”

I have tabled a written question to Home Secretary, ⁦@pritipatel⁩, asking whether she will amend the law on criminal damage following the acquittal of the “Colston Four” on a legal loophole as this could give rise to other statues being damaged. https://t.co/ZWCsKeZE22

We must not let the right hijack a crucial debate.

While the verdict does not – and cannot – set a legal precedent, it does have interesting implications for the political landscape of the city, opening up a debate that defendant Rhian Graham told the Guardian she fears could be hijacked by the Tories’ smear campaign.

There are many ways in which the slave trade still lives on in Bristol. A vast majority of the city’s municipal fabric was built on it. Disturbingly, its influence on public life can still be felt today, most notably in terms of the ongoing role the Society of Merchant Venturers plays in the city’s politics.

The organisation, which was set up by slave traders in the 13th-century, has been heavily involved in the mythologising of Colston in the city. It previously used its influence over Bristol council to oppose the removal of Colston’s statue, and even watered-down the wording of a new plaque recognising his role in the slave trade.

‘If having a statue of a slaver is so offensive, why didn’t Bristol’s black mayor take it down?’

Maybe it had something to do with the Society of Merchant Venturers intervening at every turn to ensure that Colston’s statue remained up, without any contextualising plaque.

The Merchant Venturers claims to be a purely philanthropic organisation, just as Colston was up until very recently seen to be.

But as the defence argued in their closing remarks, “You cannot purchase your legacy or buy your way out of inhumanity.” In this way, it wasn’t just Bristol’s racist past being put on trial, it was its entire civic culture.

And it seems a reckoning for the local authorities is coming. Speaking in the press conference after the verdict, Christine Townsend, a Green councillor and a member of the campaign group Countering Colston said, “I am going to be calling out those who bowed down to the members of the Merchant Venturers. It is not for them to be involved in our democratic processes. Labour MP for Bristol South Karin Smyth labour called for this organisation to disband; and that is what it needs to do.”

Meanwhile, Green councillor and former lord mayor, Cleo Lake vowed to ensure that “pressure and momentum is maintained” in enacting the Reparations motion she championed that was passed by Bristol city council last year.

Green Councillor Christine Townsend (@Christine20Tony) is a founding member of @CounterColston and has called on #Bristol to seize the moment to challenge the power of the Merchant Venturers:
https://t.co/m4wDH5egKH

Ultimately, despite the right’s smears, the Colston 4 were acquitted because they created a strong legal defence – one which allowed them to call on the jury to reflect on Bristol’s racist and colonialist legacy, and the ways in which that legacy continues to be upheld in the present.

It is this fact that the left needs to be emphasising; whatever your ideological standpoint, the legal argument was robust.

Indeed, as the Secret Barrister points out, it’s not the verdict that is a threat to the rule of the law, but the way that rightwing politicians and press with no interest in listening to the evidence or endeavouring to understand the legal principles at play, have weaponised it as a way to undermine independent juries who make decisions that do not align with their ideological position.

Chada puts it best: “Individuals who were not present at that trial, who did not sit through two weeks of evidence the jury heard, who were not given clear, unambiguous legal directions by a very senior judge, can’t criticise jury trials because they don’t like the jury verdict in this particular case! ”

Priyanka Raval is a freelance journalist based in Bristol.

Analysis: Is Bristol As Radical As It Seems?

Between the Colston statue toppling and the Kill the Bill riots, it's easy to see Bristol as a bastion of radical action. In reality, the city’s working class is deeply divided, writes Priyanka Raval.

Opinion: Police Brutality in Bristol Has Shocked the Country. Why Won’t the City’s Labour Politicians Condemn It?

Labour’s complicity with police savagery is an insult to Bristolians, one they are unlikely to forget come 6 May, writes Bristol student and Labour activist Anna Lart Greene.

Opinion: Colston Should Have Stayed at the Bottom of the Harbour

After decades of BAME communities democratically campaigning for the removal of the statue of Edward Colston to no avail, its quick and quiet retrieval by Bristol council exposes the establishment for the apologists they truly are, argues Ameya Tripathi.