Private Jet Use Shows Why We Must Abolish Billionaires

1% of people cause 50% of aviation emissions. It has to stop.

Super-rich celebrity Kylie Jenner is no stranger to controversy, but a recent Instagram post made people hot with rage in a way she probably didn’t intend.

Jenner posted a picture of the two private jets owned by her and her partner Travis Scott with the caption, “you wanna take mine or yours?” – a jokey reference to the fact that the couple own a private plane each.

While a few fans responded praising the “goals”, there was a much bigger backlash against the display of climate-wrecking opulence. One respondent wrote, “Why do I have to limit my meat consumption and use paper straws while the 1% gets to pump tons of carbon into the atmosphere for a day trip to Palm Springs?”, and got over 61,000 likes.

The couple are hardly alone: outgoing British prime minister Boris Johnson used a private plane to fly from London to Blackpool earlier this year; Jeff Bezos flew to COP26 in a private jet; and Elon Musk has reportedly ordered a new private jet worth $78 million.

These cases, and many others, drew attention not only to the extraordinary wealth of the elite, but also to the astonishing rate at which the jet-setting lifestyle of the billionaire class is pouring carbon into our atmosphere.

Aviation pollution is damaging enough in its own right. In 2019 – just before air travel collapsed due to the pandemic – commercial air flight contributed 784.8 million CO2 emissions to global warming, or 2.14% of total emissions.

Apart from a dip because of Covid-19, the impact of aviation on global warming has been growing steadily over time. The number of passengers has more than quadrupled since 1990, rising from 1 billion passengers to nearly 5 billion by 2019. 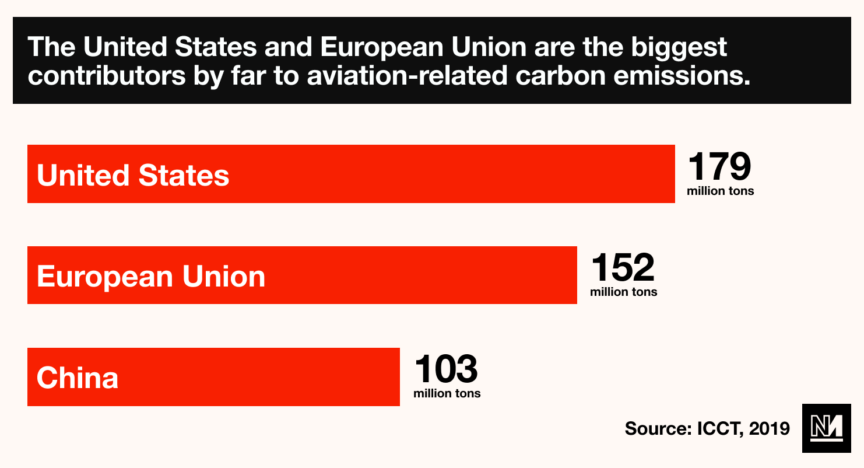 The biggest contributors to aviation pollution in 2019 were the United States (22.8% of emissions) and the EU (19.3%), with these two major Western powers pouring far, far more CO2 into the atmosphere as the result of air travel (330.9 million tonnes) than China (103m) despite the latter’s population being twice as big as both powers combined.

But even though the West is undoubtedly the primary cause of aviation-related carbon emissions, your nan visiting Florida once a year is not what’s killing the planet. There is clear inequality in terms of emissions between nations, but also vast inequality within Western nations in terms of who’s causing the climate crisis.

Take the United States – the biggest contributor to aviation pollution on the planet. Whereas commercial US flights remain 13% below pre-pandemic levels, private aviation traffic is actually higher – 15% higher, to be exact. This means that while ordinary people are actually flying less than before the pandemic, the richest are flying more. 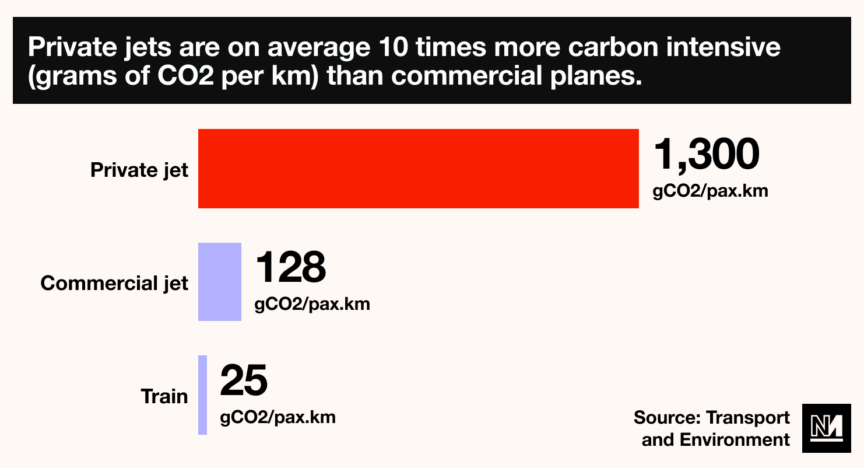 This matters because private jets are reportedly more carbon-intensive than commercial flights. Within Europe, the Transport and Environment campaign group has estimated that private jets are on average ten times more carbon intense than commercial planes. (Carbon intensity is a measure of how much CO2 emissions are produced per kilowatt hour of electricity consumed.)

These private planes, though, aren’t being used by working families for a weekend holiday in Spain. As the name suggests, private planes are used to transport one extremely rich person (and perhaps their guests) which is massively less efficient. The average private jet owner has a net worth of €1.3 billion. The consequence of all these international and economic inequalities is that just 1% of people cause a stunning 50% of global aviation emissions. 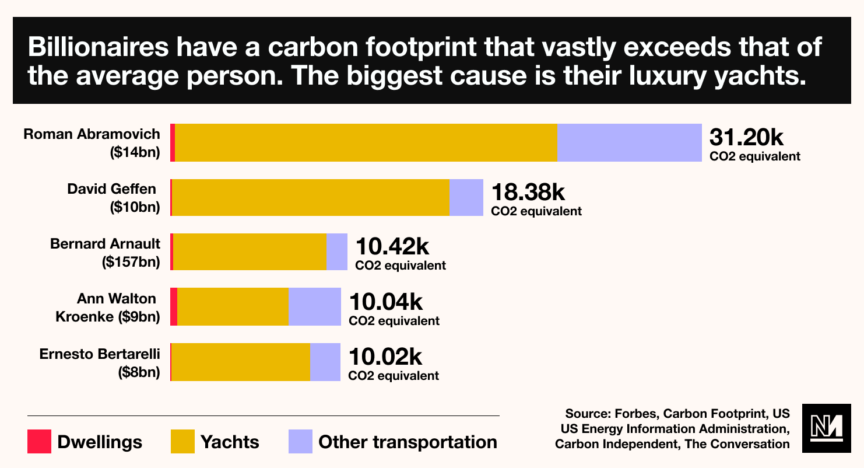 Aviation isn’t the only negative impact that billionaires have on the climate, however. Last year, analysis from website the Conversation showed that a billionaire’s carbon footprint is quite literally thousands of times that of the average American. This is the result of their yachts, jets, helicopters and massive houses.

Yet even this fails to acknowledge the full impact of billionaires on the climate.

Across the world, many super-rich individuals have poured vast sums of money into supporting parties and candidates who oppose taking action on climate change – giving them a level of influence totally unavailable to the average citizen. In the 2020 US Presidential election, for instance, ten billionaires gave millions and millions of dollars to support Donald Trump – a man who has steadfastly denied that climate change is man-made and who repeatedly blocked climate action.

Many of those reading this article would doubtless agree that billionaires have a negative impact on the climate, but what can we practically do about it?

Left-leaning politicians and activists have talked for years about making the richest pay their fair share, improving taxes and other such small policy changes. But given the vast impact that billionaires are having on the destruction of our planet, we need to move beyond those piecemeal alterations. Rather, we should adopt the slogan of one of Alexandria-Ocasio Cortez’s advisors: that “every billionaire is a policy failure”.

Governments should be doing more than raising the marginal income tax rate. They should be making it impossible for people to be billionaires, such as by setting strict upper limits on how much wealth a person can possess, as well as imposing gigantic income tax rates for income over a certain threshold. This is not a new idea: before Thatcherism took hold in Britain, the highest tax rate in the UK was 83%.

A world without billionaires would be a happier, more equal and greener world. It’s high time we made it impossible for people to become billionaires. Our planet can’t wait.

Correction: This article previously stated that the highest rate of tax in Britain was 95% before Thatcherism. In fact, the highest marginal tax rate pre 1979 was 83% and not 95%.

Questioning whether it’s too hot makes you “cowardly” and a “snowflake” according to one MP. But other countries have maximum working temperatures – is it time Britain followed suit?

Long Read: What Will It Take for the Climate Movement to Win?

Everything we’re doing to tackle the climate crisis is failing. In order to make real progress, we need to build blockades, argues Nicholas Beuret.

Opinion: Can the Right Just Believe in Climate Science Already?

Tory MPs and Nigel Farage’s new anti-net zero political movement are ushering in a new form of climate denialism with the claims that climate policies cause a decline in living standards. Joe Duffy explains.