Black Britannia: The Asian Youth Movements That Demonstrated the Potential of Anti-Racist Solidarity

When reflecting on the legacy of Black Radicalism in Britain, few would expect to see the inclusion of the Asian Youth Movements (AYM) in its history. However, the AYMs played a vital role in the fight waged against systemic racism.

The Asian activists who organised during the 1970s and 80s, were, through their anti-racist politics and Black self-identification, part of the wider Black Power movement, which saw Afro-Caribbean and South Asian migrants build strong networks of solidarity in the face of British racism.

The history of the movement not only demonstrates the power of community mobilisation and direct action, but also shows the advantages of political Blackness, a principle that has since been replaced by the ethnic nationalism we see today. 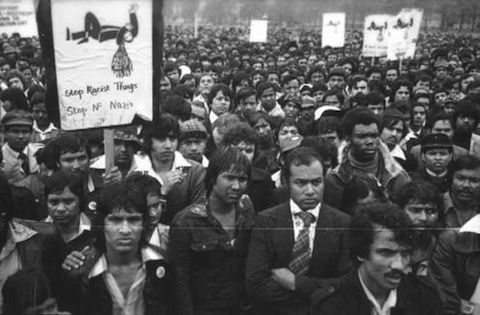 The start of a movement.

The spark that ignited the AYMs came in the form of 18-year-old Gurdip Singh Chaggar’s murder in 1976, and the subsequent disregard shown by Southall police. Chaggar’s stabbing by a group of racist white youths, while out with a friend, was the catalyst for Asian youths who had grown up against a backdrop of police racism, National Front agitations and anti-immigrant sentiment.

In response to Chaggar’s death, Southall’s Asian community came together to voice their frustration at the years of racism and violence they had faced. On 6 June, a meeting was held at the local Dominion cinema to discuss how the community could move forward. Frustrated by the lack of radical anti-racist action, a group of young Asians, mainly men in their late teens and twenties, marched to the local police station and demanded protection for their community.

Galvanised by the spontaneous action, the group of young radicals organised themselves into a community defence force, thereby formalising the Southall Youth Movement.

Unlike their parents’ generation, the Asian youths of the 1970s had grown up with a deeper sense of their British identity, and with it, the systemic and interpersonal racism that goes hand in hand with living in a predominantly white imperialist country. As Hari Sandhu, a founding member of the Southall Youth Movement, recalls, racist Teddy boys would “[pick] on the Asian community”, physically attacking them to steal their wages.

Such attacks were an expression of the overarching atmosphere of racial hostility brought on by the economic recession of the mid-1970s, which saw migrant communities scapegoated by politicians, the press and disgruntled working-class Britons, who struggled to find work or access welfare.

Perhaps the most powerful example of this antagonism came in the form of disgraced Conservative MP Enoch Powell’s infamous 1968 ‘rivers of blood’ speech, which specifically targeted South Asians in condemning non-white immigration.

In the face of such a brutal racial climate, various Asian political groups began emerging across the country. In 1977, a year after the Southall Youth Movement was founded, the Indian Progressive Youth Association was formed in Bradford. However, in response to criticism over the narrowness of an exclusively Indian group, the association was reformed as the Bradford AYM.

Inspired by what was happening in Bradford, sister movements emerged in cities like London, Leicester, Sheffield, Nottingham, Birmingham and Luton – all areas with a sizeable South Asian population, or severe racial tensions.

In identifying as Asian, these groups were able to create a far stronger, more unified anti-racist community defence. The broad encapsulating term saw these young activists championing secularism and unity, opening their organisations to all in the South Asian community, irrespective of cultural, religious or political divisions which existed on the subcontinent.

Further redefining their identity, significantly, the AYMs conceived of themselves as Black – in a political rather than ethnic sense. Employed as an umbrella term for non-white communities to use in organising against white supremacy, political Blackness was ubiquitous among anti-racist groups during the 1970s and 80s, and explains why the AYMs included members from the Afro-Caribbean community.

Focussing on the deep commonalities of structural oppression facing working-class black and brown communities, this racial unification was essential in fighting the evils of institutional and interpersonal racism. When attacking non-white communities, British racists saw no distinction between them – these activists recognised the benefit of such homogeny and used it to their advantage.

The benefits of political Blackness were demonstrated during various anti-racist campaigns, such as the Bengali housing struggle in east London and the strike against Imperial Typewriters in Leicester. On both occasions, Black and Asian people united in opposition to racial discrimination. Asian activists Mala Sen and Farrukh Dhondy played a significant role in the mobilisation of such campaigns, whilst also serving in organisations such as the Black Panther Movement and Race Today Collective.

While the AYMs took up an array of causes, they consistently protested immigration controls, which they believed were used to limit the rights of Asian and Black people residing in Britain. While such legislation impacted all migrant communities, the Asian community was particularly targeted as various laws had been created in response to waves of South Asian migration.

The AYMs adopted a campaigning strategy which focussed on highlighting institutional racism while also using individual immigration cases to humanise the struggle and offer the public a point of entry into a complex discourse. Allied organisations such as the Campaign Against Racist Laws joined forces with the AYMs to picket and petition against the state’s immigration laws. The case of Anwar Ditta was a watershed moment, garnering widespread support and media coverage and demonstrating the effectiveness of the movement.

British-born Ditta moved to Pakistan as a minor and married Shuja ud Din, with whom she had three children. After moving to Britain in 1975, the Home Office denied the couple’s application to bring their children to the country, citing irregularities in their documents and suggesting that Ditta bore no relation to her children.

In response, the Manchester and Bradford AYMs joined forces with various workers’ associations, MPs from across the political spectrum, and even influential white allies like actress Vanessa Redgrave, to form the Anwar Ditta Defence Campaign.

Having exhausted all legal avenues, the AYMs organised various demonstrations, at which Ditta was encouraged to speak about the emotional weight of her case. This action prompted popular current affairs programme World in Action to make a documentary on Ditta’s case in 1981. The documentary resulted in blood tests being sought from Ditta’s children, which proved their relation and led to the overturning of the Home Office’s decision.

Undeniably, such successes would not have been possible without the determined efforts of the AYMs. The strategy of self-reliance and direct action resulted in greater victories, as the support of traditional leftwing organisations, such as trade unions and the Labour party, proved wavering. As Birmingham AYM member Bhupinder Bassi reflected: “The only way for Black people to fight was through a process of dignity and self-reliance [with] our own communities…ultimately our white comrades would leave.”

Corrupted by the state.

During the early years of the AYMs, the organisations relied primarily on resources and funds that they acquired themselves and most remained independent of state institutions, squatting their offices and running through donations.

However, the AYMs and the popularity of political Blackness declined with the introduction of state funding, which weakened the group’s cross-ethnic coalition and commitment to grassroots, self-determining organisation.

The 1981 Scarman report, commissioned in the aftermath of the Brixton riots, stressed the need for greater state funding of “ethnically disadvantaged” communities. In response, the state, through local councils, began funnelling money to many anti-racist organisations such as the Youth Movements, thus changing the groups’ dynamic and nature.

The advent of state funding, as historian Anandi Ramamurthy argues, “impacted on the principles of self-reliance”. The AYMs made frequent applications for funding and many times their requests were met, enabling them to hire full-time workers and reduced the need for crowdfunding. However, it also curtailed their freedom to organise, dampening momentum and the sense of accountability – previously, the groups were run by member donations.

As Tariq Mehmood, the first appointed employee of the Bradford AYM, recalls, the introduction of state funding ushered in corruption and divisions within the organisation:

“One day I was thinking about how things changed. I felt that the AYMs initially was a people’s organisation and once we received funding we were answerable to an institution; the very same institution that we were fighting – the British state. A people’s organisation should only be responsible to the people, not to the funders… And I took a very strong exception as time went on believing that we shouldn’t apply for the money.”

Council funding was effective in destroying the broad-based coalitions that had been previously formed on the principle of political Blackness. Where they had previously worked together, finite state resources resulted in Afro-Caribbean and South Asian communities becoming competitive, highlighting their differences and distinctions in a bid to secure resources. 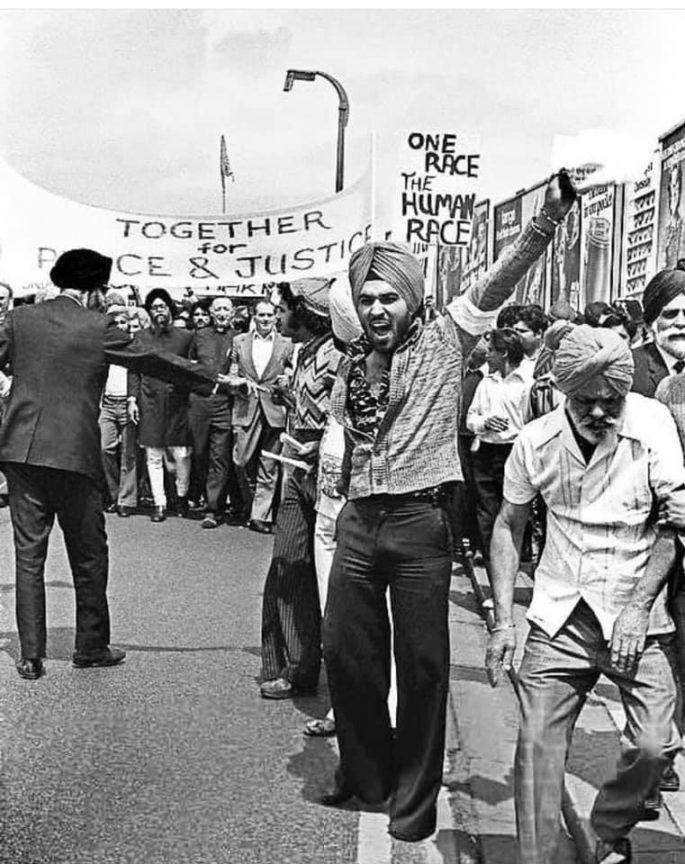 Despite the growing movement towards ethnic nationalism, some sections of the Asian community, such as the South Asia Solidarity Group (SASG) remained critical of the new development. In an early pamphlet, published in 1989 and entitled Asian Culture: Black Resistance, the SASG attacked British multiculturalism, writing: “This culture is now being defined by the state in a form which is entirely static and unconnected with Black people’s everyday struggles in Britain.”

Continuing their critique, SASG launched an attack on state funding, arguing that it was producing a “new [salaried] stratum of black community leaders” who were aiding, rather than fighting, the state in creating “narrow ethnic nationalist approaches” to anti-racism.

With the omnipresence of racism and the gradual disintegration of their broad-based alliances, the AYMs, which had once been so radical and militant, waned in influence. The groups began to splinter as some members moved away from their previous radical stances, such as Bradford West MP Marsha Singh, and retreated to traditionally leftist corners such as the Labour party, while others became consumed in state initiatives for diversity and inclusion.

Global, as well as domestic, factors contributed to the demise of the AYMs, changing the dynamics within the Asian community in Britain. The shifting geopolitical climate, which saw Islam increasingly vilified by Western media and politicians, resulted in the increasing marginalisation of the Muslim community. In the face of ostracism by not only white society but also sections of the Asian community, Muslims in Britain founded separate political organisations to address the specific needs of their religious community.

Learning from a legacy.

This demonisation of South Asians in Britain continues today: from the implementation of Prevent, the government’s programme to tackle violent extremism, which is built on a foundation of Islamophobia, to the racially charged debates over the burka.

In the face of this ongoing and ubiquitous racism, the AYMs offer inspiration for the potential of successful grassroots resistance across religious, cultural, political and national lines, while also providing an important warning about the dangers of state intervention and over-reliance on state funds.

Despite the rejection of political Blackness in contemporary political discourse, the AYMs make a strong case for embracing anti-racist solidarity in offering an effective challenge to white supremacy, rather than getting lost in a futile cycle of endless infighting and fragmentation.

Only by moving away from today’s needlessly divisive racial identity politics, to embrace a more inclusive, solidaristic way of organising, will the current movement be able to offer a meaningful challenge to the insidious racism of the British state.

This article is the fourth instalment in Black Britannia, a series which reflects on the country’s Black radical history.

Part two is here: There Is a Long, Racist History of State Surveillance of Black Communities.